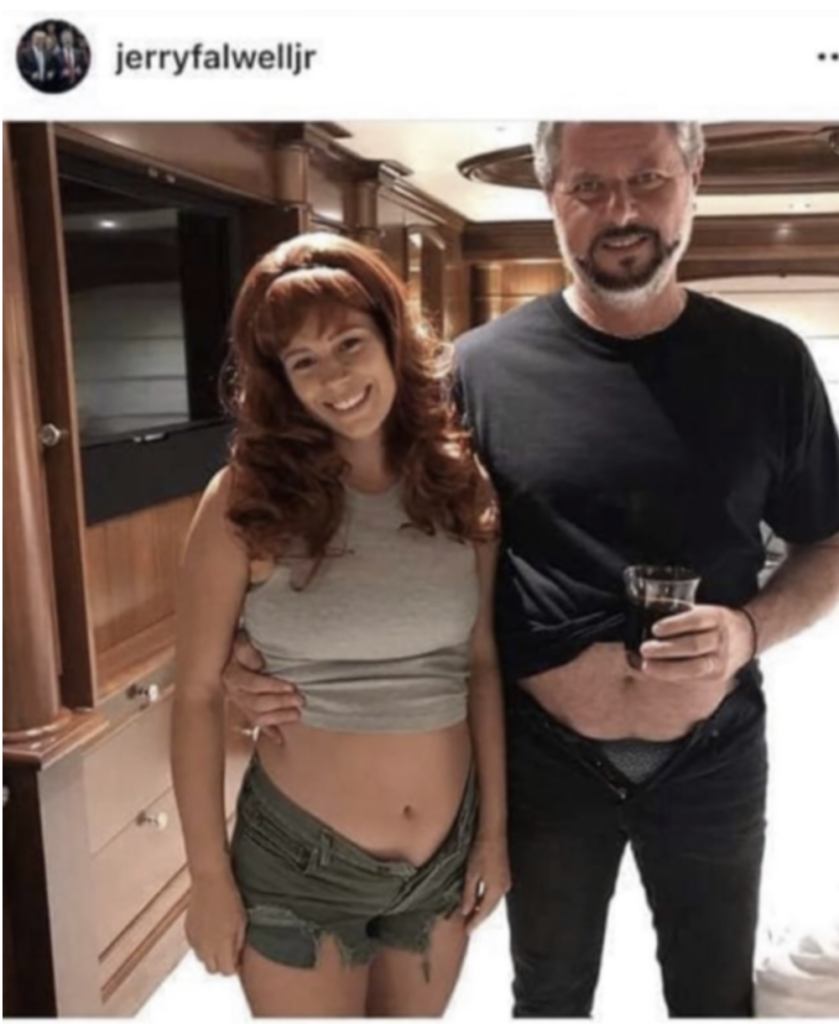 “Life makes fools of all of us sooner or later. But keep your sense of humor and you’ll at least be able to take your humiliations with some measure of grace. In the end, you know, it’s our own expectations that crush us.” ― Paul Murray, Skippy Dies

Blog news: Starting this week, my kitchen will be gutted and then put back together which will take at least 7 weeks. I will not have the ability to cook, etc. I’m trying to figure out how to do the holidays. I will try not to be grumpy.

: In this post, you will have access to the filed lawsuit. Also, be aware that it appears there are two lawsuits-one of which is pending.

For those of you who have been off the grid, here are a number of posts that I wrote following the fall of Falwell and his wife.

Here is a nice synopsis from Inside Edition

He should have disappeared with his $100 million and gotten some help for his multiple problems as alleged by numerous media groups all over the world. He attracted the attention of Politico which wrote a number of articles discussing Pool Boy, amongst other issues. Put ‘ Politico and Falwell’ into search and you can see all of the articles. Their most recent article was Falwell sues Liberty University, alleging defamation.

(Falwel is) alleging the university defamed him and did not properly investigate claims about his personal life before pushing him to resign as president over the summer.

…”Other than God and my family, there is nothing in the world I love more than Liberty University,” Falwell said in a statement. “While I have nothing but love and appreciation for the Liberty community, and I had hoped to avoid litigation, I must take the necessary steps to restore my reputation and hopefully help repair the damage to the Liberty University brand in the process.”

Falwell alleges Liberty failed to vet claims made by Giancarlo Granda, a former pool attendant in Miami who alleges he had a multiyear affair with Jerry and Becki Falwell. The lawsuit maintains that Becki had an affair with Granda “unbeknownst to Falwell,” and says that Granda tried to extort the Falwells, and was sponsored by the Lincoln Project, the anti-Trump PAC. And it says that Liberty is in breach of contract — which could entitle Falwell to a much bigger payout than Liberty has maintained he is owed after his departure.

…Granda responded with a statement denying any ties to the Lincoln Project.

… the Lincoln Project said it “has had nothing to do with the public finally learning about the true character of the Falwell family.”

Here is a copy of the lawsuit that Falwell has filed in the Circuit Court in Lynchburg.

Falwell has also threatened to sue the journalist, Brandon Ambrosino, a graduate of LUt, who wrote for Politico. This was reported by the News and Advance: Falwell threatens to sue journalist behind explosive report, demands retraction: “Legal team includes an attorney who represented Trump in Mueller.” probe.”:

Lawyers for Liberty University President Jerry Falwell Jr. have threatened in a cease-and-desist letter to sue the author of an explosive report alleging misconduct by Falwell, calling the journalist’s claims “false and defamatory.”

…Falwell has retained attorneys from the New York-based law firm Kasowitz, Benson & Torres, whose founding partner, Marc Kasowitz, served as a personal attorney for President Donald Trump until 2017. In a statement, Falwell said the firm is conducting a broad investigation into former Liberty officials and board members who may have spoken to or provided internal records to journalists.

It appears that this lawsuit is due to the information found in this Politico story which was written by a student who graduated from LU, Brandon Ambrosino: Someone’s Gotta Tell the Freakin’ Truth’: Jerry Falwell’s Aides Break Their Silence. Falwell alleges the following as reported by the News and Advance.

The magazine article, written by LU graduate Brandon Ambrosino, said it was based on interviews with more than two dozen “current and former high-ranking LU officials and close associates of Falwell’s.”

The article, which received widespread national attention, was published amid a cascade of media reports detailing free speech concerns at Liberty and business decisions Falwell has made during his tenure as university president.

…“These obviously defamatory claims are part of a pattern of disparagement you have directed at LU and Mr. Falwell,” Bowe wrote in the letter, which is dated Oct. 22. The letter concludes with a demand Ambrosino “immediately retract these false and defamatory statements,” adding that defamation action is likely.
Ambrosino confirmed in a Facebook post Wednesday he received the cease-and-desist letter, and told The News & Advance on Wednesday night, “I stand by my reporting.” Politico did not respond to requests for comment.

My opinion: Falwell should fade into the sunset on his yacht with his incredible wealth. In my opinion, he needs an intervention as does his wife, Becky. They then should go and work in a homeless shelter, cleaning bathrooms, sweeping floors, and serving food to those who are suffering from addictions and poverty.

Jerry Falwell Jr will continue to embarrass himself, his family, his former university, and everyone associated with his university. He should demonstrate humility and stop worrying about his reputation. He will not be able to buy that back by suing people. He appears to be a sad, messed up man who may have a drinking problem and his wife appears to be his enabler if all that is reported is true.

Jerry Falwell Jr- needs help but it seems like he will continue to humiliate himself instead. Defamation, my foot!  He’s his own worst enemy.