I made the above video clip from the Sovereign Grace Churches website page promoting the Pastor’s College. Whatever they got going there looks to be better than Prozac!

Apparently, times are tough in the world-wide denomination known as Sovereign Grace Churches. Mark Prater, the Executive President of the smallish denomination (a position second in power to only “The Humble One,” C.J. Mahaney, who, though in title is merely the Senior Pastor of a run-away church plant in Louisville, KY, in actuality he functions as the de-facto Supreme Commander of SGC) is seen in a recent podcast bemoaning the fact that they just can’t seem to recruit young men to the ministry as easily as they once did. But Executive President Prater thinks he knows the reasons why this is. Listen in to hear his explanation:

To sum up, the Executive President of Sovereign Grace Churches guesses that young men aren’t beating down the doors to get into the Sovereign Grace ten-month “Pastor’s College” because of cultural apathy, low pay, and gosh darn, it’s going to be tough sledding being a preacher in these cultural challenging times. I guess it probably is a little tougher to make bank than in the days of the fictitious charlatan, Elmer Gantry, or say, C.J. Mahaney, although he had a lot of help from his ghostwriter. Of course, Bob Kauflin made his money the old-fashioned way – he earned it. Who knew writing Gospel songs could make for such a lucrative career? But things weren’t all glitter and gold for the first generation of SGC’ers. For every success story, there is also a story of failure and shame. Take, for example, Matt Wassink, run out of the ministry for marital indiscretions, or Gene Emerson’s rendezvous at a hotel with a “masseuse” who just happened to be part of a Law Enforcement sting.

SGC pastor Ben Kreps, the host of Mark Prater’s weekly podcasts, has an additional reason young men aren’t inclined towards a career in the ministry.  Give a listen:

I’m not so sure I agree with pastor Kreps. I don’t know for certain all the stressors he faces in these times, but I believe his occupation is probably a bit less stressful than say a Police Officer, or a Nurse working with COVID patients, or a Doctor, or a school teacher, or a Corrections Officer in a prison, or an owner of a restaurant or bar or health club or a myriad of other jobs. Ben is probably an OK guy, but I wonder if he may have an inflated view of his profession.

Funny, isn’t it, how neither Prater nor Kreps mentions the elephant in the room.  Let me give you a hint boys: 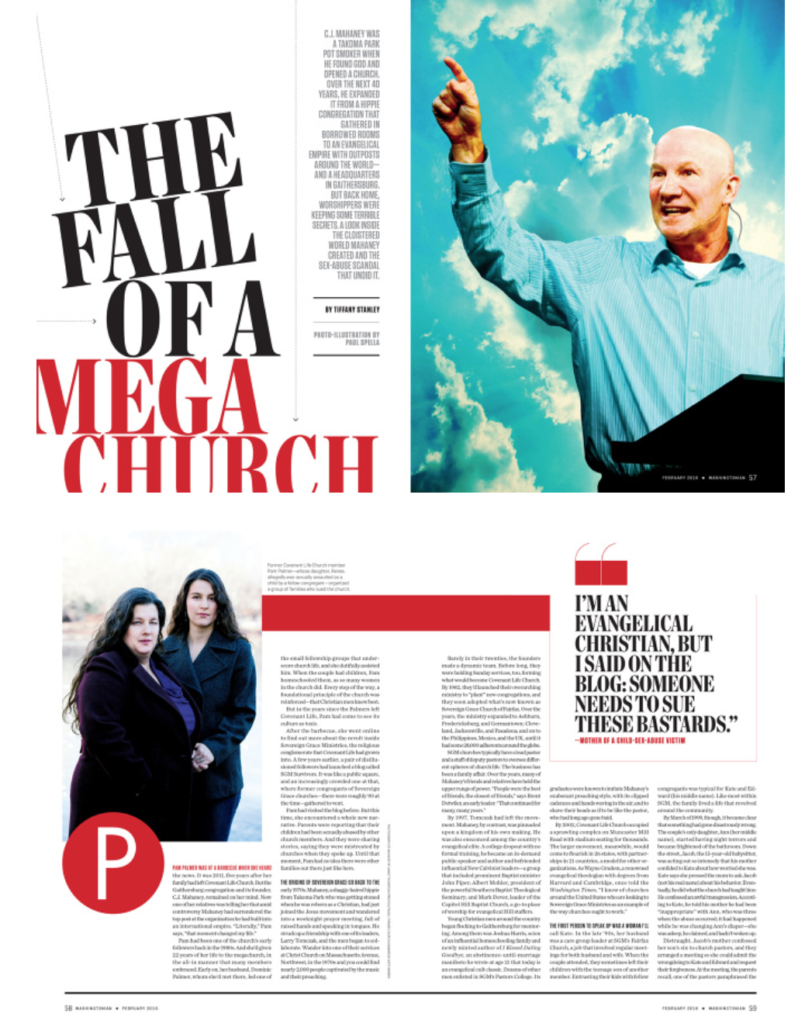 Can you imagine what your feelings would be if your son, a recent college graduate, came home and advised you he was going to apply to the Sovereign Grace Pastor’s College in hopes of becoming a pastor in that denomination? I would ask him if he had read the above article, or if he had read this article by Rachael Denhollander, or the lawsuit that was filed against Sovereign Grace or the horror story of Keith Daukas, a Sovereign Grace intern pastor?  Then I would say, “Son, I may not be the sharpest knife in the drawer, but I believe I have lived long enough to know a thing or two about religion, and you are about to hitch your wagon to one of the worst possible Evangelical denominations that I know of.  I urge you to reconsider. If you desire to be a pastor, that is fine, but I would recommend you go to a good seminary and find another denomination.”

Shocking, but maybe not when I think how naive I was when I was twenty-something, Sovereign Grace has found ten men willing to drink the Kool-Aid. Of course, four of them attend Mahaney’s church and one is from Prater’s church so they have been subjected to extreme propaganda, but I feel sorry for all of them. Aside from the spiritual side of it, I wonder how many of them will actually find satisfaction “serving” as a Sovereign Grace pastor? And financially, I wonder how many churches are in a position to hire any of these guys? 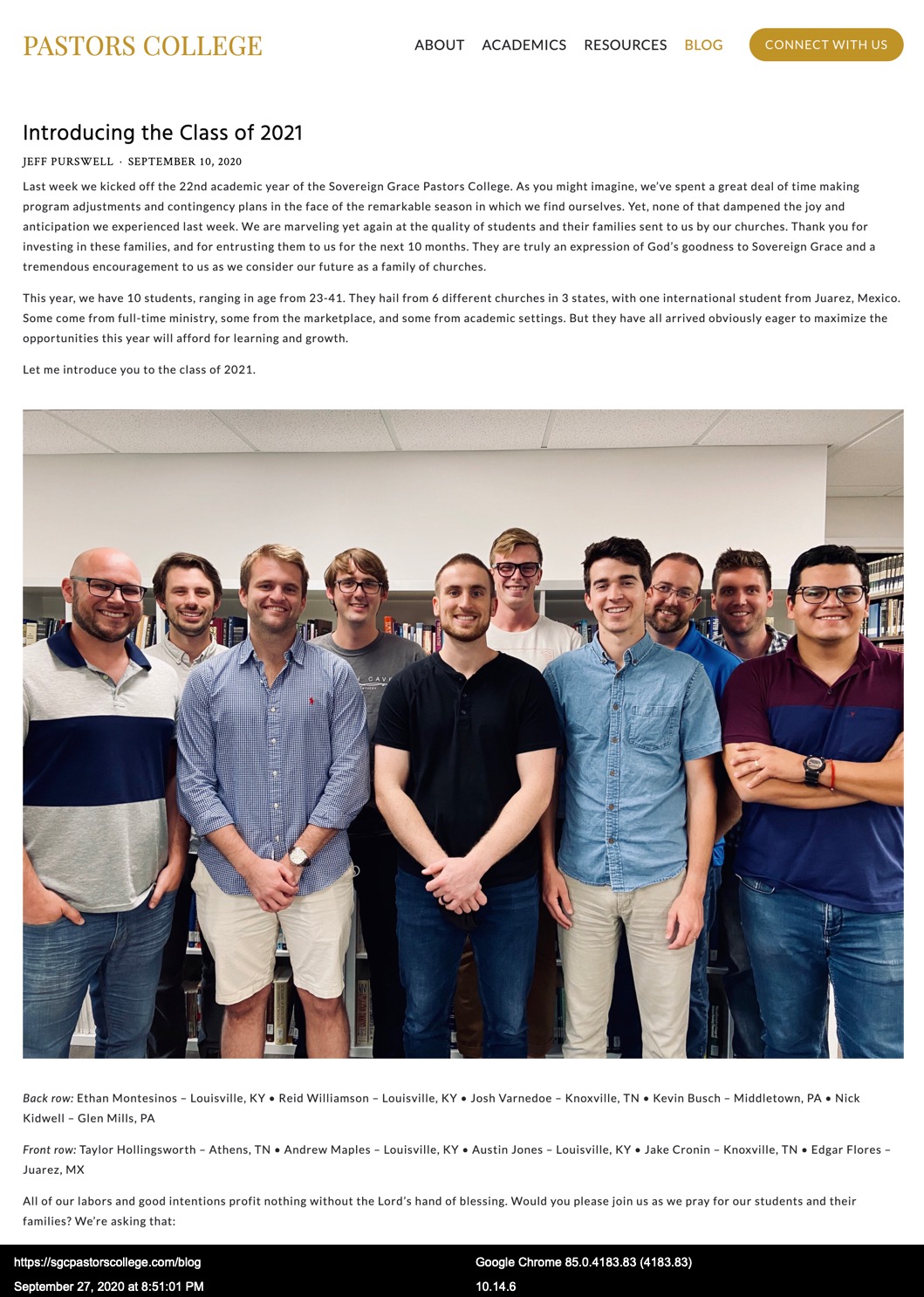 The most unbelievable item in this podcast is yet to come. Listen below as Mark Prater says they need to start recruiting new leaders from Grade Schools!

Next, it is announced that John Payne and Jared Mellinger have been selected and a part of the second generation of Sovereign Grace leaders.

As an outsider, I have to wonder about the wisdom of selecting John Payne and Jared Mellinger for national leadership. They are undoubtedly both yes-men, well-schooled in the fine art of gospel flattery. But I have written an article on John Payne proudly announcing one of the benefits of being a part of the Sovereign Grace family of churches is the ability to bring in guest speakers like John Loftness. I would also encourage you to look at Brent Detwiler’s article on Loftness titled “John Loftness in Focus – Former Chairman of the SGM Board & Alleged Sexual Sadist.”

Jared Mellinger, in an attempt to keep his church from reading Brent Detwiler’s documents concerning the problems within the Sovereign Grace denomination, had this to say:

“Words can do incredible damage.  [A] question for the discerning.  Which would be more dangerous for a Christian to be exposed to?  A website devoted to sexually immoral images or a website devoted to sowing suspicion against leaders and tearing people down.  Friends there is more than one way to ruin your soul.  Avoid ungodly speech.  Avoid speaking of it.  Avoid listening to it.  For the sake of the holiness of the church.”

You can read the complete account of this in an article by Detwiler titled, “What Does My Website Have in Common with Pornography? Ask Jared Mellinger!

Detwiler’s words have proven truthful. Many churches have considered all the information available to them and made the choice to leave the Sovereign Grace Denomination. Yet Jared Mellinger is rewarded for his loyalty to the corporation! That, my friends, is a sign of ongoing corruption. Mark Prater should not be surprised his denomination is having trouble recruiting men to the ministry.

One final thought. What role does God have in calling men to the ministry?