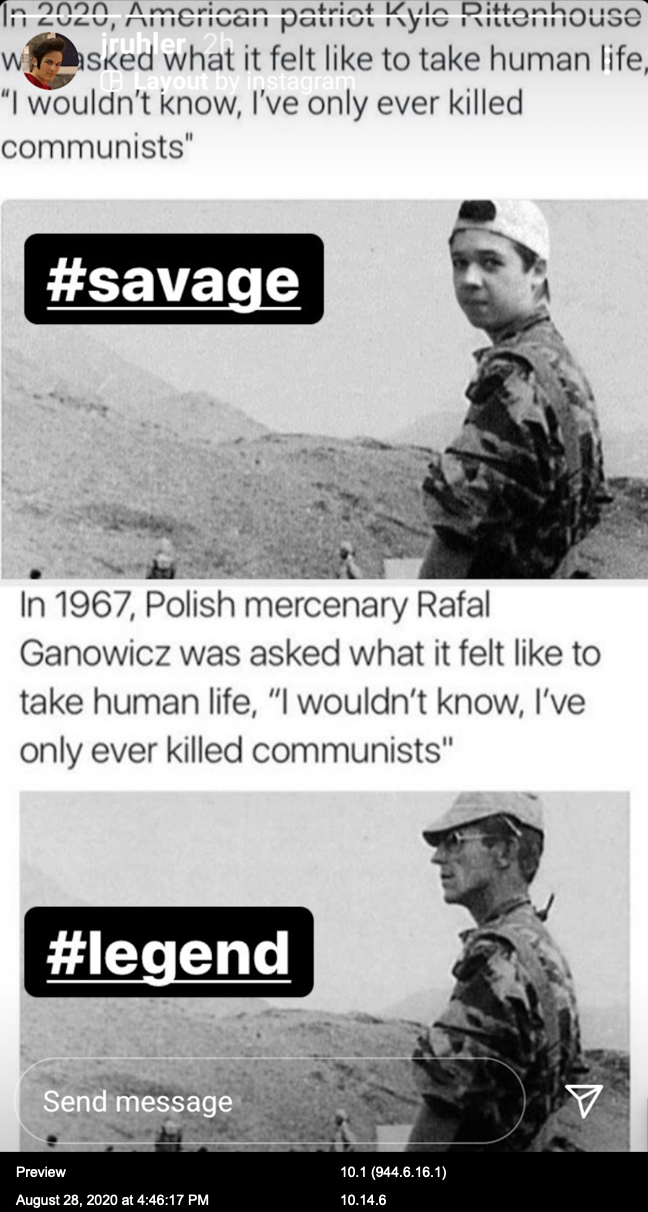 The screenshot above was taken from Jacob Uhler’s Instagram account. It was posted as a “story” so it disappeared after 24 hours. I find Uhler’s “story” very disturbing. You will recall that Kyle Rittenhouse is the gun-toting seventeen-year-old Antioch, IL resident whom prosecutors have accused of fatally shooting two men and wounding another who were protesting the police shooting of Jacob Blake in Kenosha, WI. 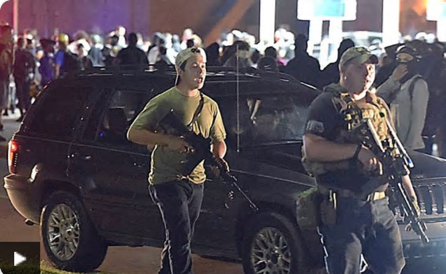 Exactly what point is Jacob Uhler attempting to make? It appears to me that Uhler is suggesting that Rittenhouse should be viewed as a legend instead of a savage. If this is not bad enough, it needs to be noted that Jacob Uhler is the Vice President of a Cedarville University sanctioned organization called Turning Point USA.

What is the group Turning Point USA? This from the International Business Times:

As a 501(c)(3) nonprofit, TPUSA is not required to disclose its donors. But based on public tax records and some reporting by other outlets, IBT has identified the sources of over $900,000 in funding for TPUSA. Republican mega-donor families, GOP politicians and other wealthy individuals have provided large amounts of money so the organization can spread free-market principles — from which the donors benefit — among young people, the majority of whom, overall, lean liberal.

“We are proud to fight for free markets and smaller government, both of which are ideas that are resonating extremely well to our target demographic of 18-24 year olds,” Kirk told IBT.

Working to appeal to millennials, TPUSA is funded by a substantial number of older, wealthy individuals whose economic views the group promotes.

The screenshot below was taken from the Turning Point USA’s website. 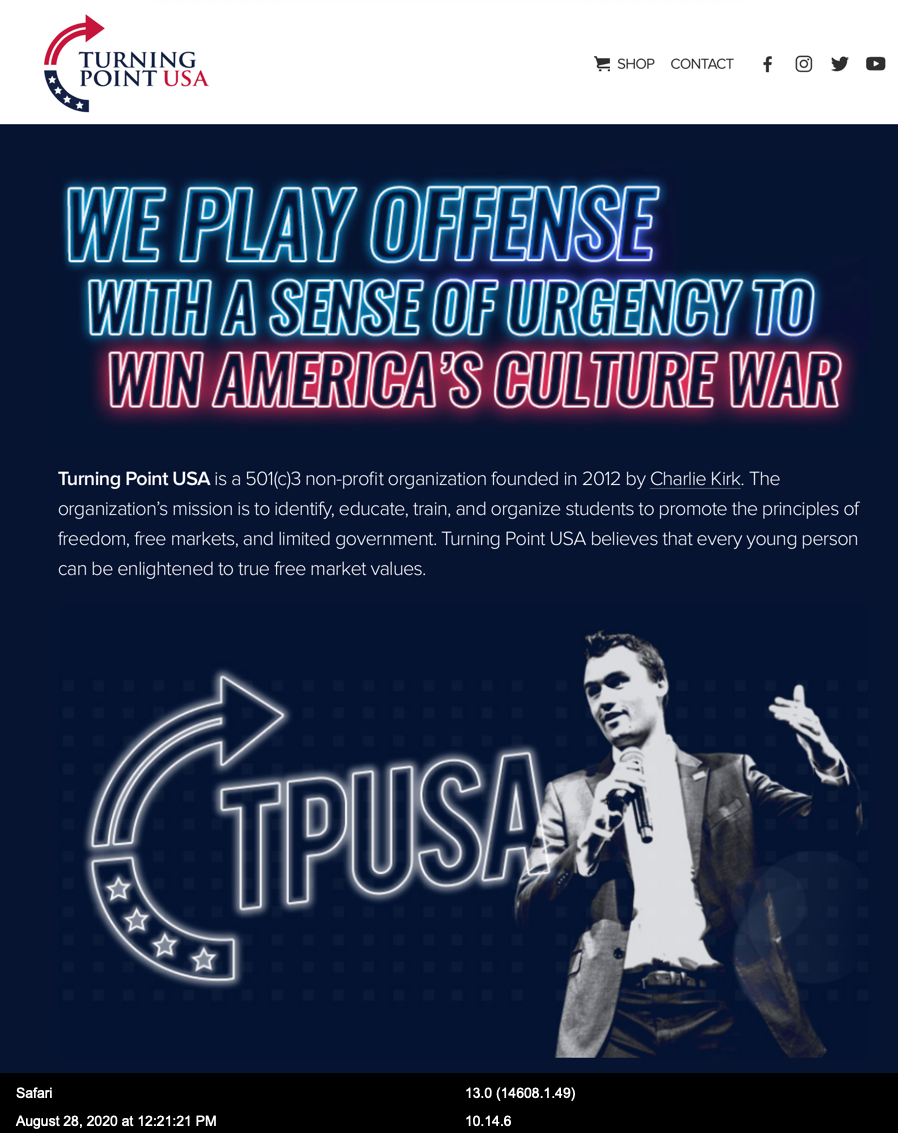 I found this background information on student organizations on the Cedarville University website:

Student organizations provide opportunities for you to get involved and make connections during your time at Cedarville. From academic and professional, to social and service, to cross-cultural and special interests, you’ll find 90-plus organizations with like-minded students who share your passions and interests. Want to join a group of future teachers? You’ll find that here. Interested in networking with professional engineers? We’ve got a group for you. Want to develop leadership skills? Practice a foreign language? Worship through dance? You’ll find an organization that welcomes you and helps you advance your skills and find a place in our tight-knit Christian community.

Theoretically, any Cedarville student can start an “ORG.” I was able to obtain an “ORG” request form which I have reproduced in part below. Note that “Not all ORG Creation requests will be approved.”  So true. Continue reading for an example of an ORG that was rejected. 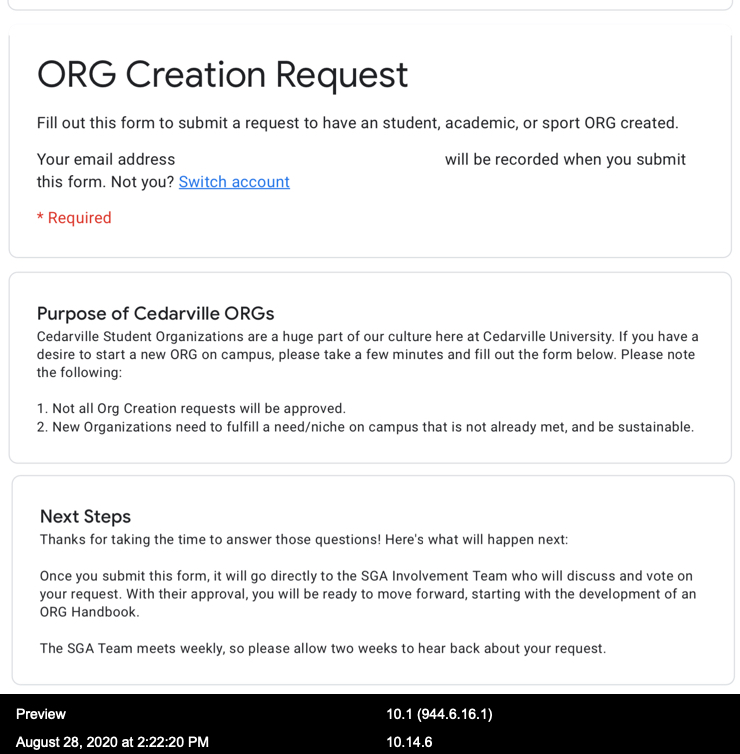 The following concerns the creation of the student organization SASA – “Students Against Sexual Abuse”.

This type of organization is common at other universities. The purpose of the org was to raise awareness, offer training and education, and be a safe space for sexual abuse survivors. After submitting a form to SGA to become an official organization SGA replied with the following on February 13, 2019.

“In the past few weeks, we have sought counsel on this Org Creation Request and we have come to the conclusion that we will not be moving forward in the creation of Students Against Sexual Abuse. Although we love the heart behind the idea, sexual abuse is an extremely hard topic that must be handled with extreme care. Because of this, we have a team of excellent staff members who are here specifically to handle that topic. The University has taken specific steps to be proactive against sexual abuse including resources like our Student Handbook, our Title IX efforts headed up by Teresa Clark, and counseling services.

We love hearing your passions for proactivity in regards to sexual abuse and we want to encourage you in that, however, we don’t think an Org Creation is the path that we’re going to take.

Another option to consider would be to reach out to Mindy May to see if she would consider potentially hosting a seminar in efforts to raise awareness on topic of sexual abuse. This would require much time and thought, but it could be a potential path to explore!

Again, thank you for your passion for this topic and for your patience with the extended delay in our response. We hope you understand the position that we’re coming at this from. Please feel free to reach out with any questions regarding this decision.”

Below is a quote from another email concerning an interaction with Theresa Clark, dated March 13, 2019:

“It’s become clear that we will not be able to jump right in and become an official org this year. [Potential org officers] discussed this with Teresa Clark and other advisors and have decided that it would be better for this group to start a bit smaller with various activities in order to demonstrate that there is a gap in awareness on campus.”

A concerned individual wrote this to me:

“Clearly there was a gap in awareness on campus, among the administration and others. Because of the training Dr. White received and new federal regulations, CU updated the Title IX Regulations (per new federal guidelines) and hired two victim advocacy individuals to support people going through the Title IX process. These changes are a good start, but that’s all they are – a start. CU still has a long way to go. Sexual assault awareness training is mandatory at many state universities for everyone (students, faculty, staff, and administration). The comparison of how quickly CU approved Turning Point and how they shut down a sexual assault org is concerning to me, especially since they claim to be “For the Word of God and Testimony of Jesus Christ.”

Another individual I communicated with advised me that there used to be a Democratic Org at Cedarville, but that Thomas White abolished it sometime between his arrival as President and the fall of 2016.

Turning Point USA, obviously conservative in nature, was formed this year. Additionally, there is already a Republican Org on the Cedarville campus.

Each organization that is formed at Cedarville must have officers and an advisor. The advisor is a staff person tasked with the following responsibilities: 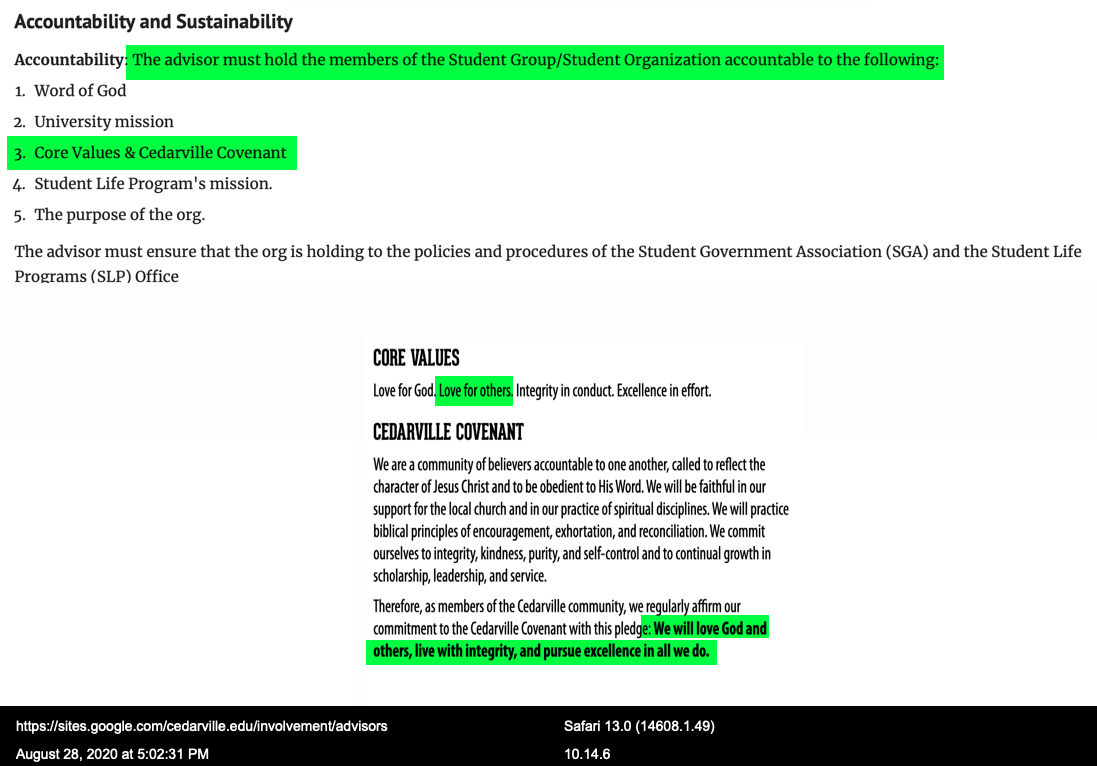 It appears to me that Turning Point USA may be failing on the “Love for others” requirement. What follows are some examples of what I deem to be a lack of love.

One of the featured speakers at the Turning Point USA Chapter Leadership Summit of 2020 was Hall of Fame baseball pitcher Curt Schilling. Below is an excerpt from an article on Schilling. The entire article can be found here. 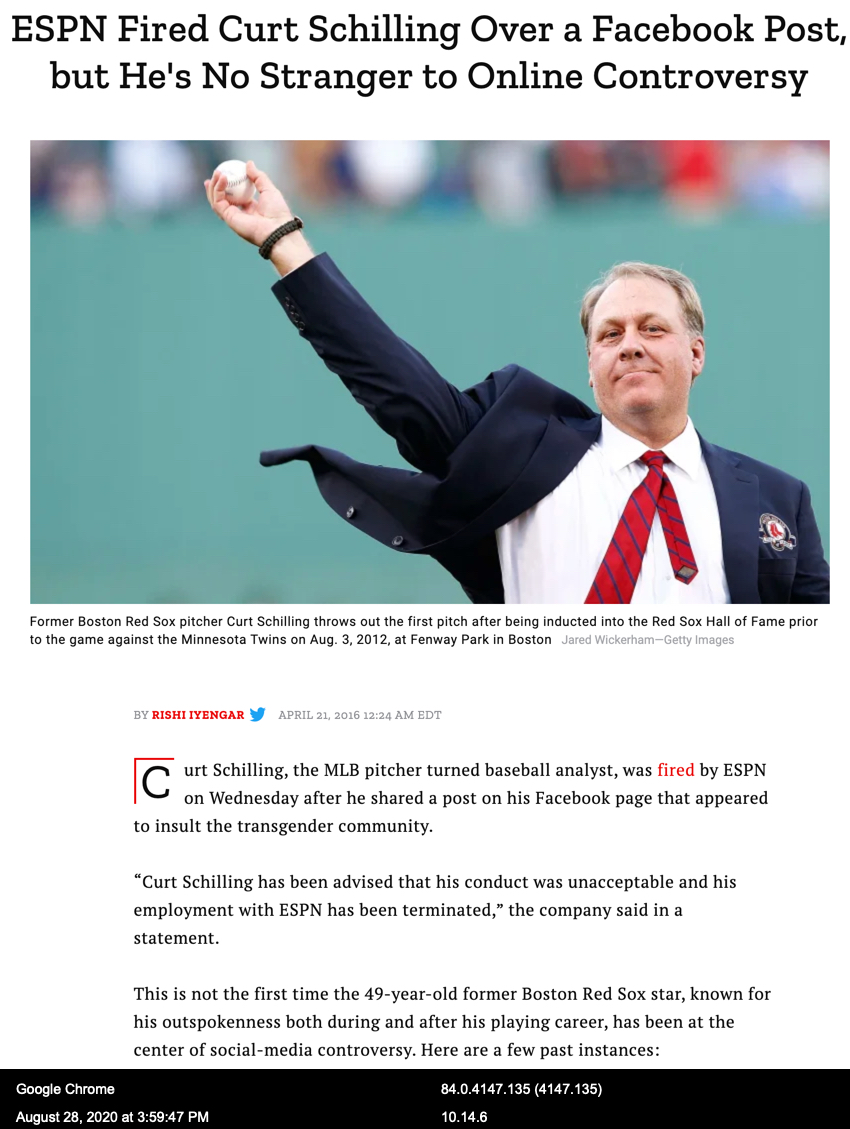 Below is a post found on the Cedarville University Turning Point USA Instagram account.  I have captured the entire video, below is a one-minute clip I took from the five-minute video. 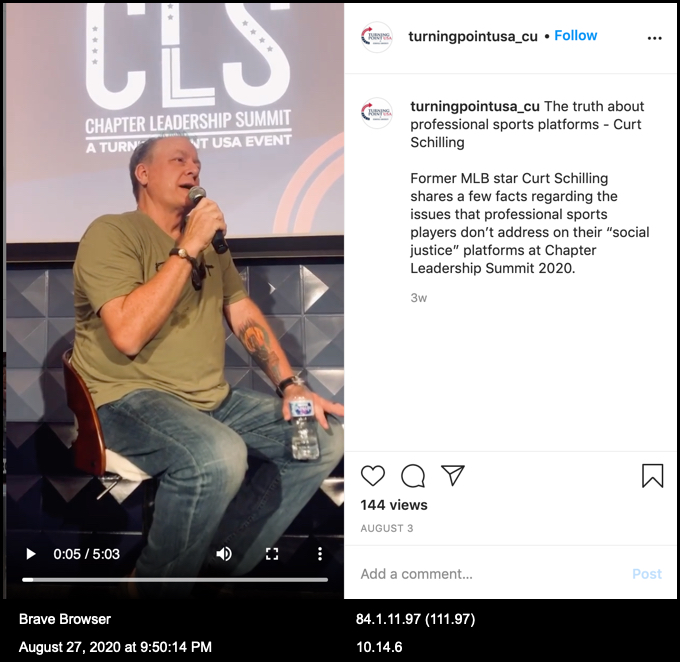 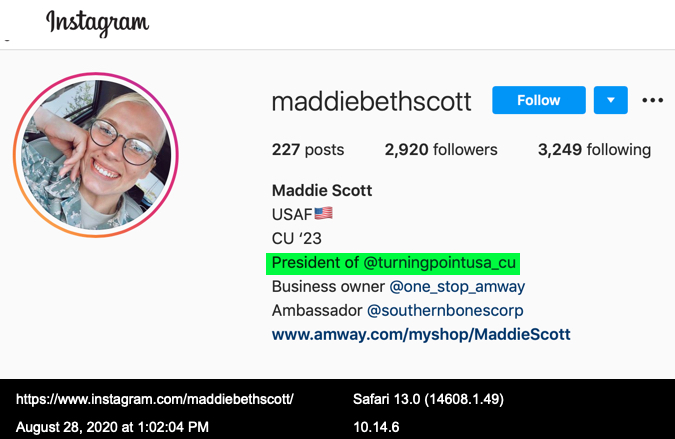 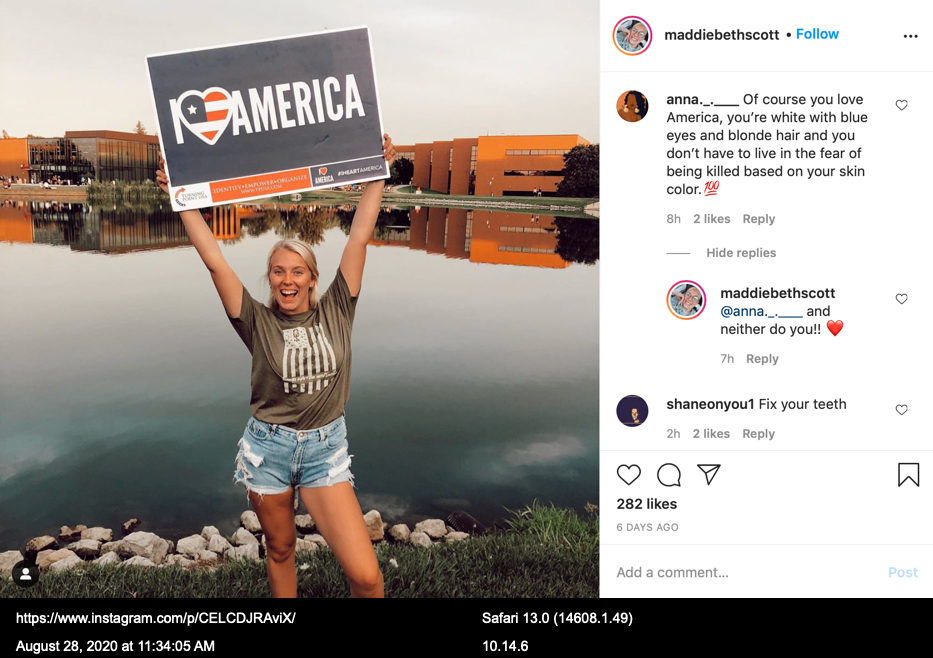 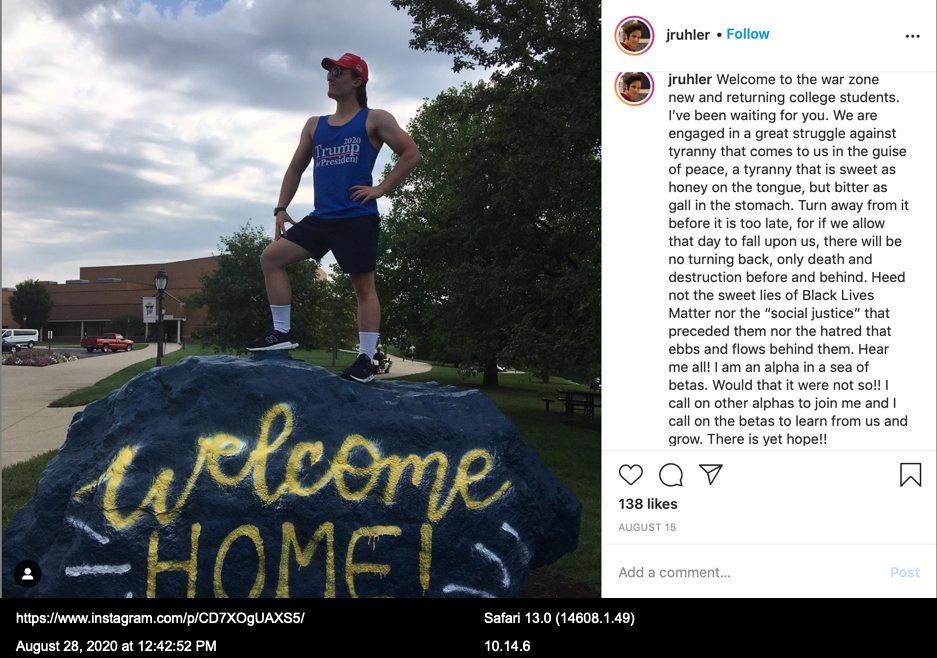 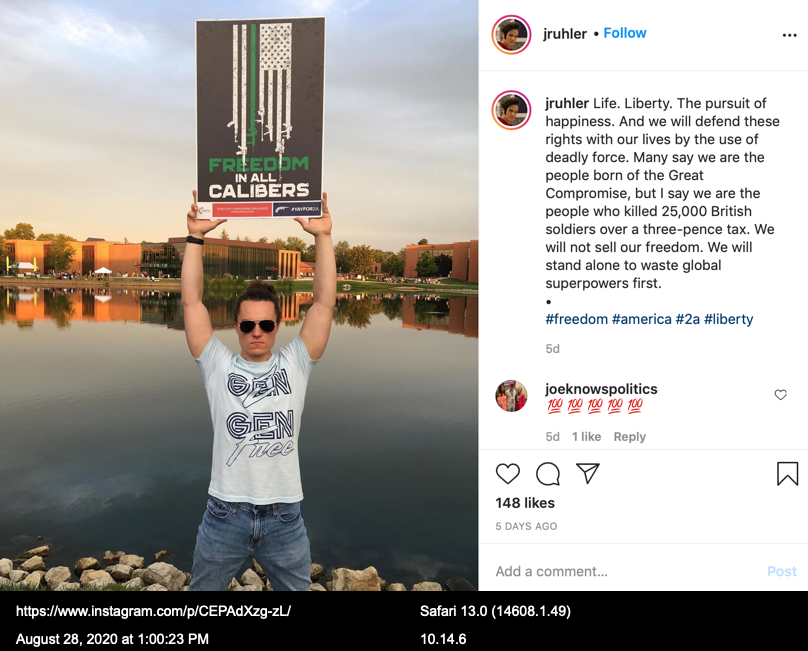 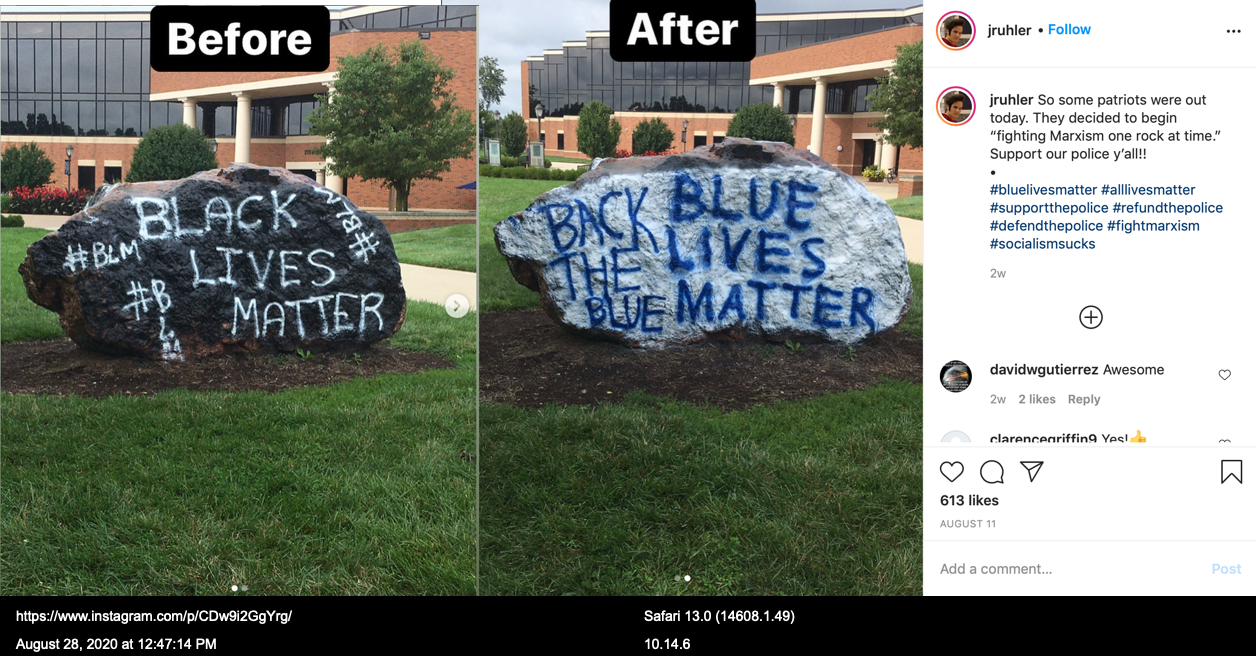 As I stated at the top of this article, I find these posts to be very troubling. Were I a minority student I don’t think I would be feeling “welcome home” at Cedarville. But perhaps that is the intent of the  Cedarville officers of Turning Point USA.  Regardless, I am of the opinion that Thomas White needs to take action immediately to ensure that Cedarville University is a safe and welcoming institution for all students, regardless of their color.

“This month, Chis Hodges, senior pastor of Church of the Highlands, an evangelical congregation with 60,000 members spread across 24 locations, came under fire after screenshots were shared online showing the pastor liking several posts by Charlie Kirk, a controversial pro-Trump activist.

The posts in question were considered racially insensitive and, among other things, questioned whether white privilege actually exists.”