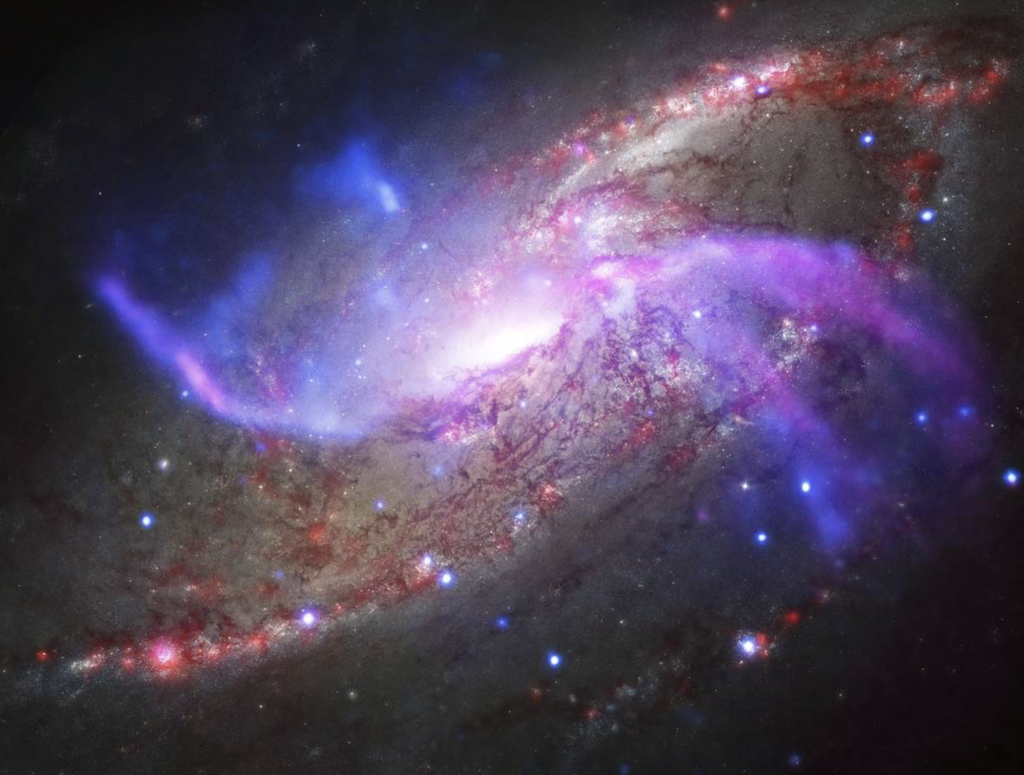 “Not all forms of abuse leave bruises.” link

This week begins a number of posts which have some links to the very beginning of this blog. TWW first wrote about Acts 29 in 2010:  Big Papa D and the SBC  (forgive the old formatting.) Of course it was about Mark Driscoll, Acts 29  and his nonsense. All of our local SBC dudebros: Southeastern Baptist Theological Seminary: Danny Akin and JD Greear were supportive of Acts 29. Interestingly, Matt Chandler shows up in support of this network led by Driscoll who actually was the one who brought this group together.

Throughout the years, TWW has documented in the post after post, the inherent problems of authoritarian leadership and predatory practices in taking over churches. This post in 2013 was especially Is Acts 29 Planting or Decimating Churches?

The more we read and documented, the more convinced I became that Acts 29 is simply one of several entities that do things exactly in the same way. This includes 9 Marks, The Gospel Coalition, Desiring God and any number of other Reformed Baptist and PCA churches led by those who consider themselves part of the Young, Restless and Reformed movement. Sadly, these men are no longer young and many of them wear their skinny jeans hiked up under their increasing girth. Oh yes, then there are the costly sneakers…

Acts 29 has long been known for its heavy-handed leadership style. I remember when Matt Chandler took over the network. The rejoicing was loud and unrestrained. Chandler was then known as the Pope of the YRR set except the pope starting exhibiting signs that his DNA was not much different than Mark Driscoll’s genes. There was the:

I could go on and on. It has been evident to me since the Narcissistic Zero incident that Matt Chandler was an authoritarian bully and that we would continue to see problem after problem with him which brings us to the real meat of this story.

Steve Timmis fired as CEO of Acts 29 as reported by Christianity Today.

This was subtitled: “Steve Timmis was acclaimed for his model of a close church community. But former members claim that inside The Crowded House, he resorted to bullying and control.”

Here are some quotes from the article.

Matt Chandler fired five critics of Steve Timmis who came to him for help. He mirrored Timmis’ bullying style.

Apparently 5 staff members complained to Chandler that Timmis was a bully. And Matt Chandler, acting as the supreme bully, fired them all.

Chandler played the “I didn’t know it” card.

I don’t believe Chandler. He was well aware of Timmis’ abusive style since, in my opinion, it mirrors Chandler’s modus operandi.

A tutorial on how to evaluate Steve Timmis’ church, The Crowded House, for clues that this guy might be a spiritual abuser.

Google his name and see which ministries admire him.

There is one thing I always do before evaluating the church website. I like to see if the person I’m looking at hangs around or is admired by other concerning ministries. In this case, I searched Steve Timmis and Sovereign Grace churches and came up with some links. It is obvious he is admired in this ministry which I believe has a history of abuse and authoritarian leadership. This is not proof. Only a clue.

Go to his church website: The Crowded House link

I believe one should spend at least 20-30 minutes reviewing a church website prior to visiting the church for the first time. These websites often give enough information for the reader to spot red flags. In this case, I am looking for potential clues to point towards the potential for controlling and abusive behavior.

Steve Timmis has been dumped from Crowded House and the church *intends* to hire *someone* to explore what happened and make recommendations.

We write with a concern for the reputation of Christ and a desire to care for his people.

Steve Timmis, the founder of The Crowded House, has been transitioned out of his role with Acts 29 following allegations about his leadership style. This was followed by an article in Christianity Today about his conduct in the church. On Friday 7th February Steve Timmis resigned as an elder of The Crowded House. We have valued his ministry among us and his role in founding the church. Many of us owe him a personal debt.

We also feel the weight of the stories told in the article. It is therefore our intention to ask someone from outside our network to explore what has happened and make recommendations. It will be for that person to shape the process, but we want to listen to all concerned with humility. We are willing to hear where we may have failed people. We recognise the need to open ourselves up to external and impartial scrutiny.

That’s really good but…my understanding that one of the elders is related to him and the other two elders are quite young. So, do not take this as a sign that they are taking care of the mess. Wait and see who is selected to *make recommendations.* In the meantime, do some of your own research.

They intend to control you.

Again, on the home page (they are making this easy for me) read this. 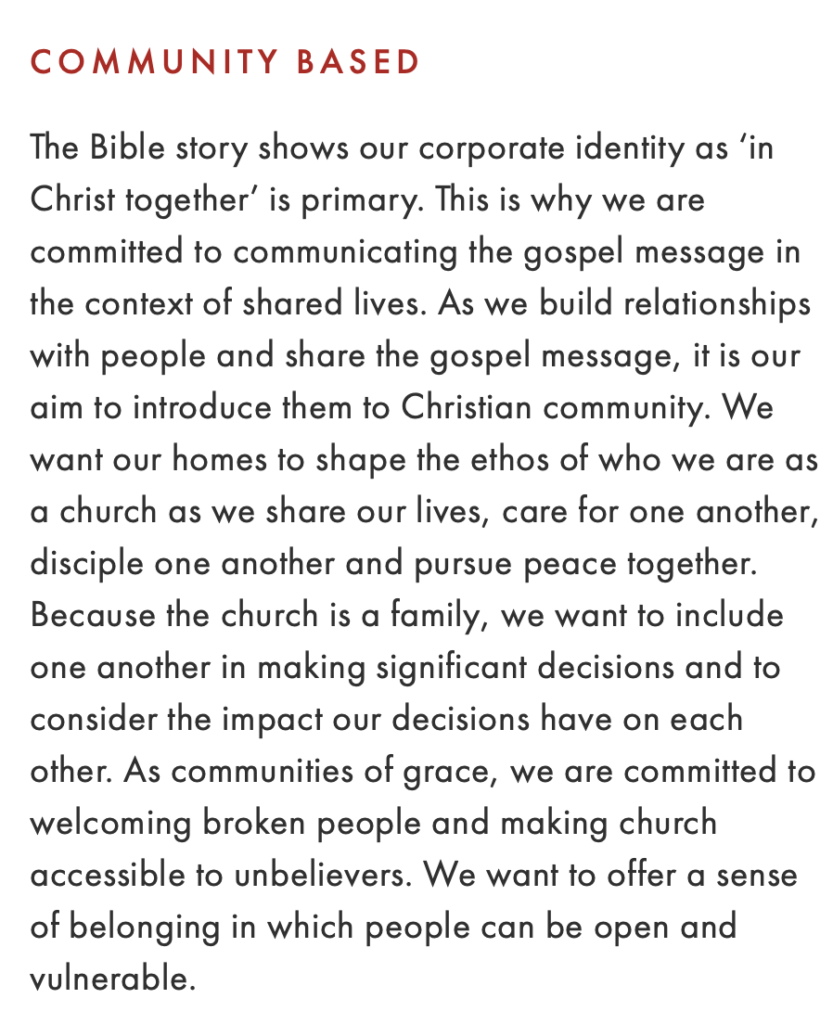 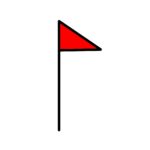 One must look at the church as one’s family. This means that significant decisions that impact the family must be considered. If you read the entire CT article, you will see this example.

He recalled being berated for making travel plans without consulting with Timmis first. He was told he was rejecting discipline and choosing to be “a law unto himself,” a signature Timmis phrase (originating from Romans 2:14) that former members repeated in multiple stories.

This is significant. I know a church which mirrors Crowded House. A young man wished to change jobs for a better position that he had long wanted. He told his *family* and they disagreed with him and told him to turn it down since it might take time away from them!!

This statement alone would cause me to stay away from this church.

Under the gospel-centered category on the first page (this is so easy) you find the following.

Speaking the truth in love, we challenge one another to be sacrificial, servant-hearted, risk-taking and flexible because the gospel has priority over our comfort, preferences, security and traditions.

That sounds really, really nice. However, can you see how this might be used to coerce an unsuspecting member to acquiesce to an uncomfortable demand?

Does Crowded House affiliate with other groups? Yep

At the very bottom of the front page, one can see the logo of Acts 29 which is known for being authoritarian in its *gospel* presence.

Crosslands is a ministry for training and education started by, of course, Acts 29 so one should be aware of the DNA Involved. For example, Biblical counseling is offered through Southeastern Baptist Theological Seminary.

Always look at a statement of faith.

In this, one quickly learns the parameters of doctrine. Definitely reformed, and definitely complementarian

The Crowded House is evangelical, missional, reformed and complementarian.

Ask what they mean by complementarian. What exactly can women do and not do?

By doing this, I discovered something. Not only did they can Timmis but at least one other elder stepped down. I bet it was his relative. Yikes! The two who are left are very young. This should be another red flag. 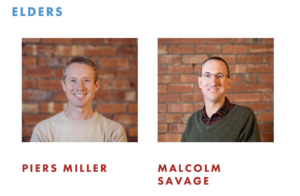 Click on “internship” and read it carefully. Sounds really good.

The Crowded House internship is a year long programme that offers a unique opportunity in which both your character and skills will be developed. Our aim is to provide a significant experience of gospel ministry that will prepare you for a lifetime serving Jesus among his people in the world.

My good friend, Todd Wilhelm, called me last evening and got me laughing about this. You see, it appears that the interns are supposed to develop character. Its really important. How do they do this? 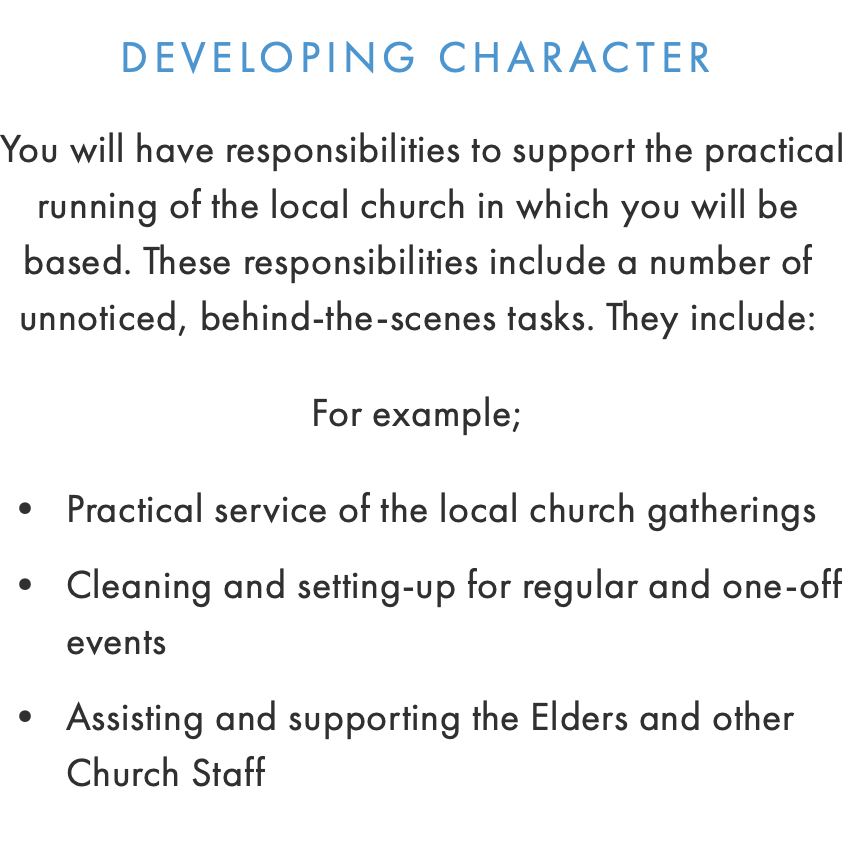 Yep, sweep the floor and develop character. I went to a church that had a ton of deacons. Their job was to assist in the parking lot and add chairs in the sanctuary as needed.I have to admit that it was funny when men (only men in that church-Reformed baptist) who were so excited to be deacons, found themselves spending the better part of Sunday morning in the parking lot.

There area number of other red flags on that website but I’ll leave that up to TWW sleuths.

Finally, always check for outside sources who are interested or who have been involved in the situation. This is one incredible blog post.

Here is one well-written post: God frees us from celebrity pastors

I got a chance to see Steve in the flesh many years ago when he was touring across the UK plugging one of his new books. He spoke really well and was very engaging. I kind of liked him as despite his age (he was there along with Matt Chandler) he was really passionate. I had heard about him only in name but when he was introduced I realised that he had co authored a few books that I actually owned.

He and Tim Chester (Whos is an enabler of the abuse Timmis inflicted) had knocked out a number of books that were getting eagerly eaten up by many Reformed Evangelicals who wanted to be less cold and stodgy and more warm and friendly with their fellow neighbour. Timmis was at the forefront of putting these things into action and putting bible verses behind them. So to vast swathes of middle class and rather nervous reformed Christians his books were just what they were after

…So thousands of us happily bought anything that was promoting a ‘missional’ or ‘gospel intentional’ way of living. Church planting was the buzz word and it was something all the people who ‘actually cared’ were involved in.  These were the spiritual heavy hitters who by their works showed how much they loved God.

Often I will look at one of my old bookcases. It is filled with different books I had bought and read from cover to cover. The first shelf of those is made up mostly of reformed books that were written in the early 2010’s and beyond. I cannot express how much time I wasted reading them.

…I honestly can shed no tears for him (Timmis). I find in these circumstances that the celeb pastor has no end of comforters publicly supporting and endorsing them, however the nameless, small and often poor victims who have not the luxury of a recognisable name have very few comforters.  I am overjoyed that Timmis has been outed and hope he can hurt less and less people and those who he has hurt can find healing and fellowship with our Lord.