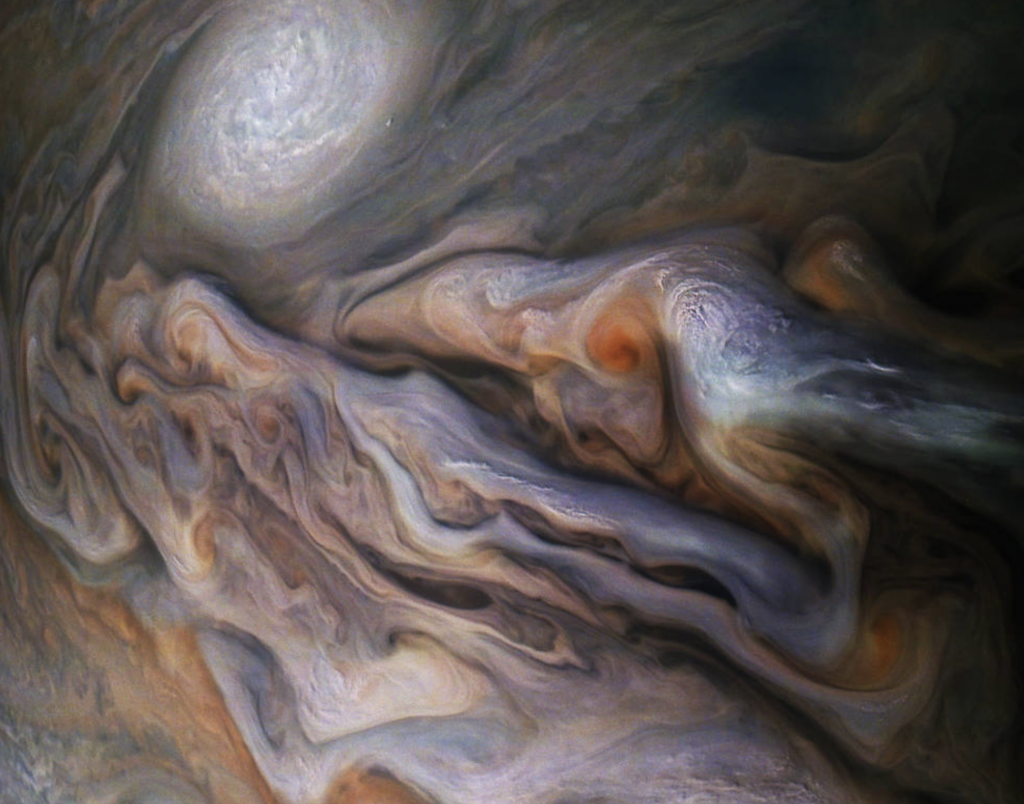 “A multitude of magnificent, swirling clouds in Jupiter’s dynamic North North Temperate Belt is captured in this image from NASA’s Juno spacecraft. Appearing in the scene are several bright-white “pop-up” clouds as well as an anticyclonic storm, known as a white oval.”

“Seasoned leaders have to come up with some way signaling to everyone in the organization that they are in code red.” Bill Hybels

Recently, the Independent Advisory Group (IAG) released their report on Bill Hybels, Willow Creek Community Church and the Willow Creek Association. Here are the names of those who served on this committee.

These are their conclusions. 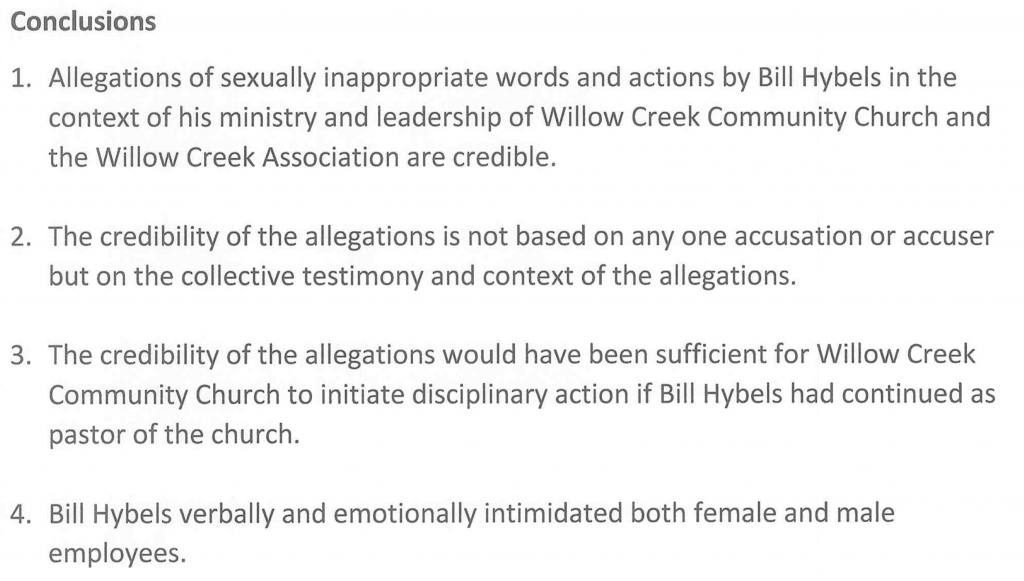 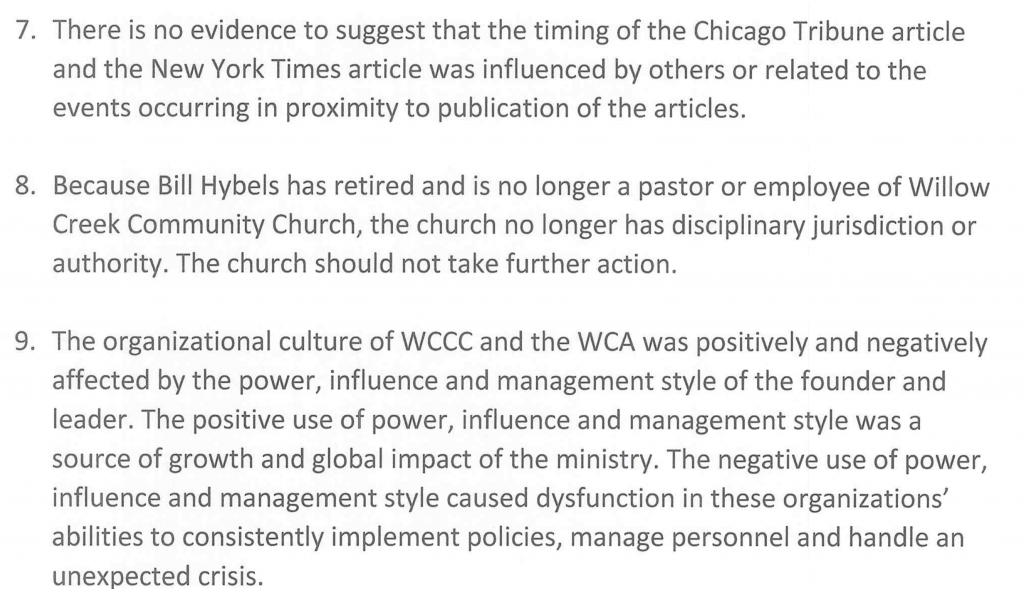 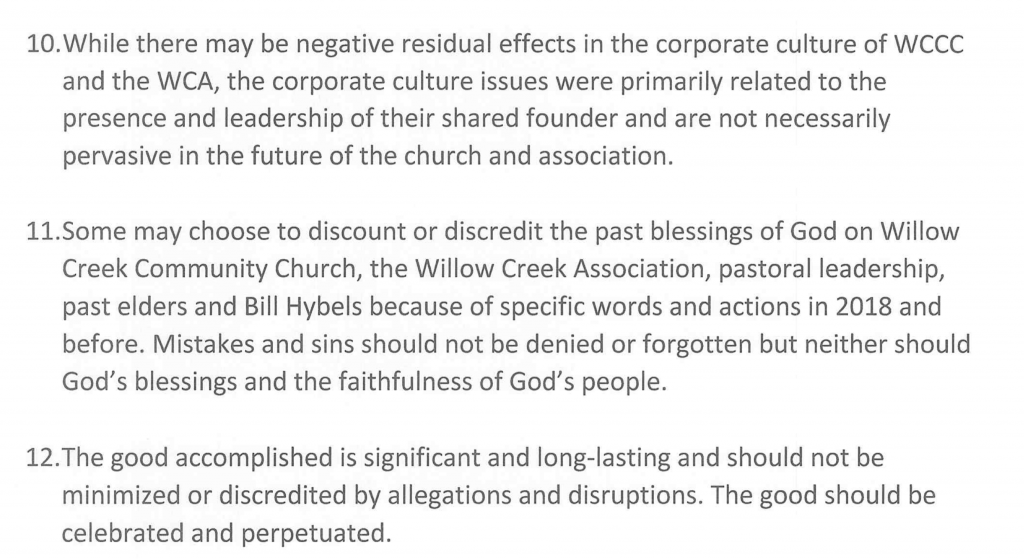 You can go to the report to read their recommendations. These would include making Hybels return some of his compensation to WCCC while obtaining his own legal counsel and the need to form a means of reconciliation with the victims.

After I read this report, I experienced a feeling of *meh.* I decided to let my thoughts simmer a bit and am glad I waited. Nancy Beach, one of Hybels victims, just released her evaluation of the IAG report in RIGHT/WRONG/CONFUSED/MISSING: MY RESPONSE TO THE IAG REPORT.

She has kindly given me permission to reprint it here. Dee is particularly excited to see TWW listed as part of The Press. My high school English teacher would be startled, given my rather abysmal performance in the writing aspect of that subject.

RIGHT/WRONG/CONFUSED/MISSING: MY RESPONSE TO THE IAG REPORT by Nancy Beach

I have been asked by friends, family, and a few reporters how I feel and what I think about the recently released report by the IAG (Independent Advisory Group) concerning the allegations related to Bill Hybels (BH). Here’s my bottom line: I believe the report got the big ideas right:

That being said, after reading the report I experienced a wide range of emotions – numbness, great sadness, some anger, and an overall feeling of, “Is that all there is?”  Last year at this time I was in Florida, waiting for the Chicago Tribune article to come out.  One year later, I find myself reflecting often on the extreme challenges, deep pain, and totally unexpected events of this past year. I know I am not alone in this story, and only represent one dimension and perspective on what has taken place. For me it has not been a story of one year, but of 5 years now since I first learned of allegations of a 14 year affair with BH, confessed to Leanne Mellado. I joined a process that spanned the next several years, seeking to bring that truth to light with the elders of Willow Creek and the Board of the WCA.  Of course my story goes back decades, to a time when I first met Bill as a teenager and the entire trajectory of my life changed.

Many strategic planners and leadership coaches, including me, use a structure to assess their current reality. Four categories are looked at to bring clarity – what is Right, what is Wrong, what is Confused, and what is Missing. I have chosen to react to the IAG report using this outline. Again, this is my personal perspective…

The report sounds dispassionate and somewhat clinical. I realize they need to be professional and objective. But if I’m honest, I long for a sense of outrage. What happened grieves the heart of God. So many lives were broken and affected by the sins of BH and the lack of strong oversight by those called to lead the church and the WCA. Jobs were lost. The consequences are immeasurable. The reputation of the church and the ministry of the WCA were seriously damaged. Followers of Christ around the world were heartbroken to learn that a leader who brought so much vision and leadership lessons had let them down. This is not simply a benign series of misjudgments. This was a tragedy of epic proportions.

Tracing all the way back to last March, I’m wondering where the lament of God’s people has been. Willow Crystal Lake, one of the satellite sites, did hold an evening of lament and confession. But I’m not aware that a similar experience took place at the Barrington campus, or as a part of last year’s Summit. I believe we all need more grieving before moving on. I keep hearing about “the new season” and how the church and WCA were never about one person. That is true. But what is also true is that the founder of a world changing movement, the primary voice and visionary leader followed by scores of people, has committed serious sins and then lied to cover up those sins. I agree with Scot McKnight who called us to lament.

What is missing in the report are details. Why do details matter? Because there are still people wondering if this could possibly be an over-reaction, if the women are fully telling the truth, if Bill’s abuse of power was really just “strong leadership.” I am aware of specific evidence and many episodes and stories that were told to the IAG. None of that comes out in the report. But it’s not too late if Willow Creek Community Church and the WCA choose to get all the important information out there. Why not clear the air? What are we afraid of? Details matter.

In an effort to move on, I believe what is missing are still some specific, long overdue apologies. These should be made publicly. Several people had their good names and reputations dragged through the mud. The Mellados and Ortbergs were called “colluders” who had a “vendetta” against BH and the church. That is false information. The words spoken by Betty Schmidt, Vonda Dyer, myself and others were challenged and called lies by some. This should be made right. I also believe the elders who resigned should cycle back and apologize more completely for their serious missteps. In addition, the Board of the WCA and its leaders should apologize for not fulfilling their responsibility to take greater care with the information they received, and for allowing misinformation about the victims to be distributed globally. The WCA should also clear up any impression that their former President, Jim Mellado, had any motives to bring down Bill Hybels, the church or the WCA.

The IAG recommended that the church consider granting financial assistance for counseling or other resources for those who were directly harmed by their interactions with BH.  I agree, but think what is missing would be the scope of this assistance. Specifically, I believe the church should consider making major compensation to Pat Baranowski and Vonda Dyer, who both lost income or incurred financial repercussions because of the behavior of BH. Even though the current church leaders had nothing to do with the sin that affected the victims, I call them to do the right thing for these victims or any others deemed worthy of financial help.
Repentance From Bill Hybels: Finally, perhaps the biggest thing missing are any words from Bill himself. Words of genuine, full, complete repentance. His silence further hurts all the victims. I pray regularly that God will do a work in his heart and spirit, that he will pursue truth, counseling, confession and forgiveness.

Finally, perhaps the biggest thing missing are any words from Bill himself. Words of genuine, full, complete repentance. His silence further hurts all the victims. I pray regularly that God will do a work in his heart and spirit, that he will pursue truth, counseling, confession and forgiveness.

If you are still with me, I want to make some final comments. I doubt I will be writing about these events again, and want to make a few commendations, by name. A big thank you to some of the courageous people who played significant roles in this story:

The historic events that have taken place will be reflected on and studied for years to come. It is my sincere hope and prayer that we will move beyond a sense of Us/Them with people who see things differently – that we will all unite around our original love for  a ministry called Willow that God used to transform thousands of lives. I join with others hoping that ALL of us will experience healing and growth – that God’s church will be purged and cleansed, that we will submit to the work of the Holy Spirit, that the Bride of Christ will become more radiant, filled with truth and grace.