“Deeming the information demanded immediate action and could not be deferred to a regular meeting of the Board, based on the details presented, the Executive Committee unanimously resolved to terminate Dr. Paige Patterson, effective immediately, removing all the benefits, rights and privileges provided by the May 22-23 board meeting, including the title of President Emeritus, the invitation to reside at the Baptist Heritage Center as theologian-in-residence and ongoing compensation.”

Statement by SWBTS Board of Trustees Executive Committee (5/30/18)

Whenever I thought about Paige Patterson retiring, I pictured him wearing his cowboy boots, donning a Stetson hat, and riding off into the sunset with his ‘helpmeet’ Dorothy.

However, these are unprecedented times in the Southern Baptist Convention.

Last week Patterson was ousted as president of SWBTS by seminary trustees and named president emeritus and pastor-in-residence of Southwestern Seminary.

On the same day that the trustees were contemplating Paige Patterson’s fate, they were made aware a situation that occurred while Patterson was SEBTS president. A woman contacted Wade Burleson and revealed that while she was a seminary student at SEBTS in 2003, she had been raped. Wade put her in touch with Sarah Pulliam, a religion news reporter at The Washington Post who who once worked for Christianity Today.

The Washington Post published this woman’s story on May 22 (the same day the SWBTS trustees were meeting). According to the Post article:

She said she had been dating the man she alleges raped her and had allowed him into her apartment the night she said he assaulted her. The two were kissing when he forced himself on her, she said. She said she reported it the next morning to the administrator who handled student discipline. That administrator then reported the incident to Patterson, she said, and she was required to meet with Patterson and three or four male seminarians she said were proteges of Patterson’s. She said she doesn’t remember the specific words Patterson used but that he wanted to know every detail of the rape.

Patterson and other administrators did not report the incident to the police, and she claims that Patterson encouraged her not to, as well, she said. The Post confirmed that a report was never filed with the Wake Forest Police Department.

The woman said she was put on probation for two years, but she doesn’t know why, saying it was perhaps because she was with another man alone in her apartment, which was against seminary policy.

“They shamed the crap out of me, asking me question after question,” said the woman, who attended the seminary until 2005 before dropping out for reasons she said were unrelated to the alleged incident. “He didn’t necessarily say it was my fault, but [the sense from him was] I let him into my home.”

The woman said she recalls Patterson telling her to forgive the man who allegedly raped her. The former roommate said the woman described the alleged assault to him shortly after it happened and later complained to him about her treatment by Patterson and seminary officials.

In a sermon he delivered in 2013, Patterson suggested women who have had “a problem in your home” should not bring their case to a judge because it could get in the way of that judge’s faith.

Apparently, this strategy had worked well for Paige Patterson UNTIL NOW… 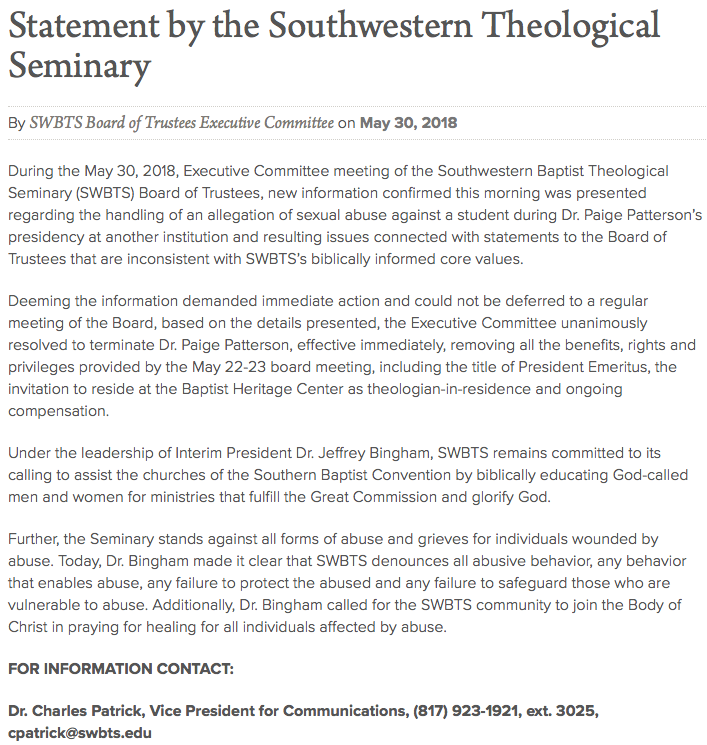 It is sending shock waves through the evangelical community.

Here is how Christianity Today broke the news:

A week after trustees voted to immediately shift Paige Patterson to “president emeritus” at Southwestern Baptist Theological Seminary (SWBTS), the board’s executive committee has stripped the Southern Baptist stalwart of all “benefits, rights and privileges.”

In a statement announcing Patterson’s termination, the committee stated today that it had confirmed information regarding reports that he mishandled a sexual abuse allegation while president of Southeastern Baptist Theological Seminary (SEBTS).

Last Tuesday, a former SEBTS graduate student told The Washington Post that after she reported her rape to Patterson and fellow seminary officials in 2003, they failed to notify authorities and the former president encouraged her to forgive the perpetrator.

The CT article goes on to name of the victim, who willingly came forward to reveal her identity.

As you might imagine, the secular world is also abuzz with this breaking news.

Truly, these are unprecedented times in both the secular and the Christian world. 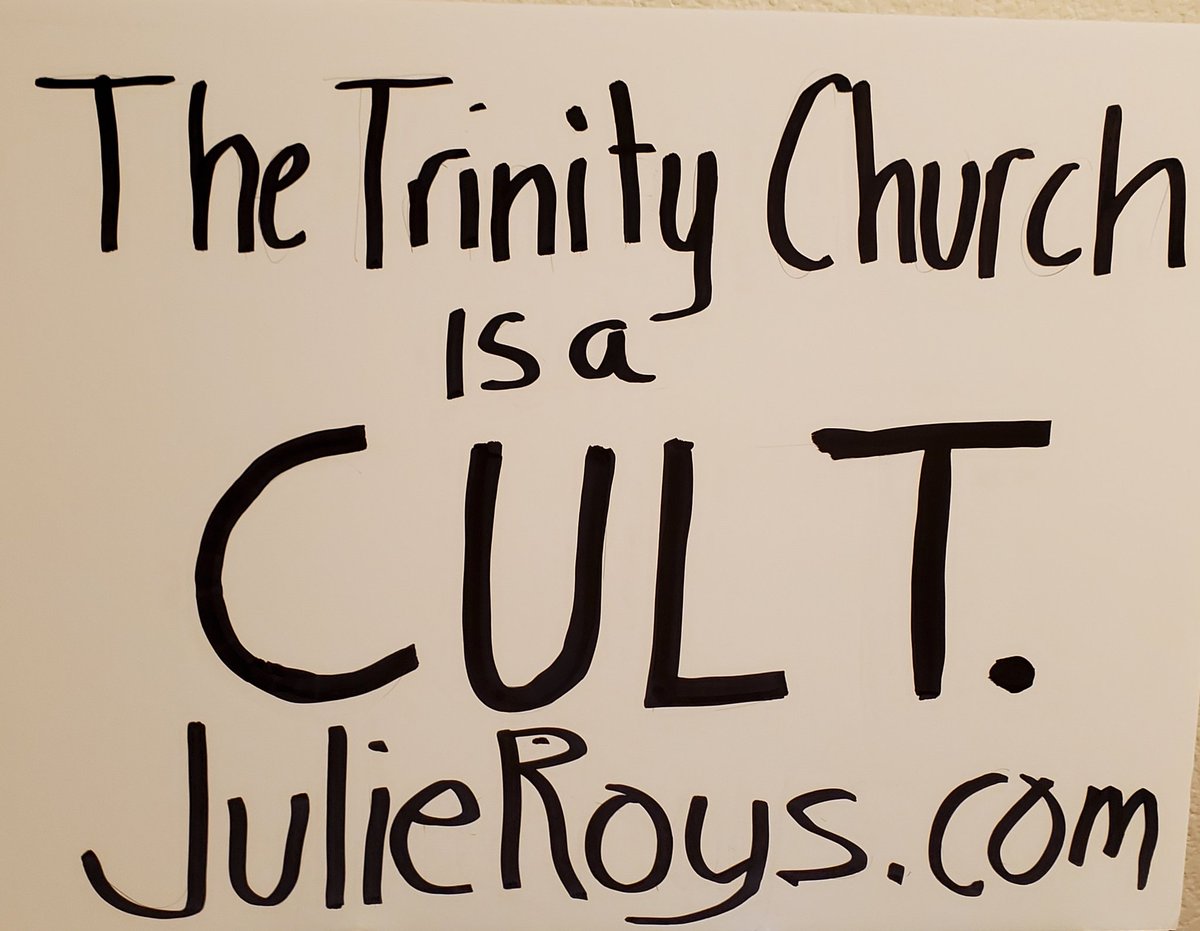 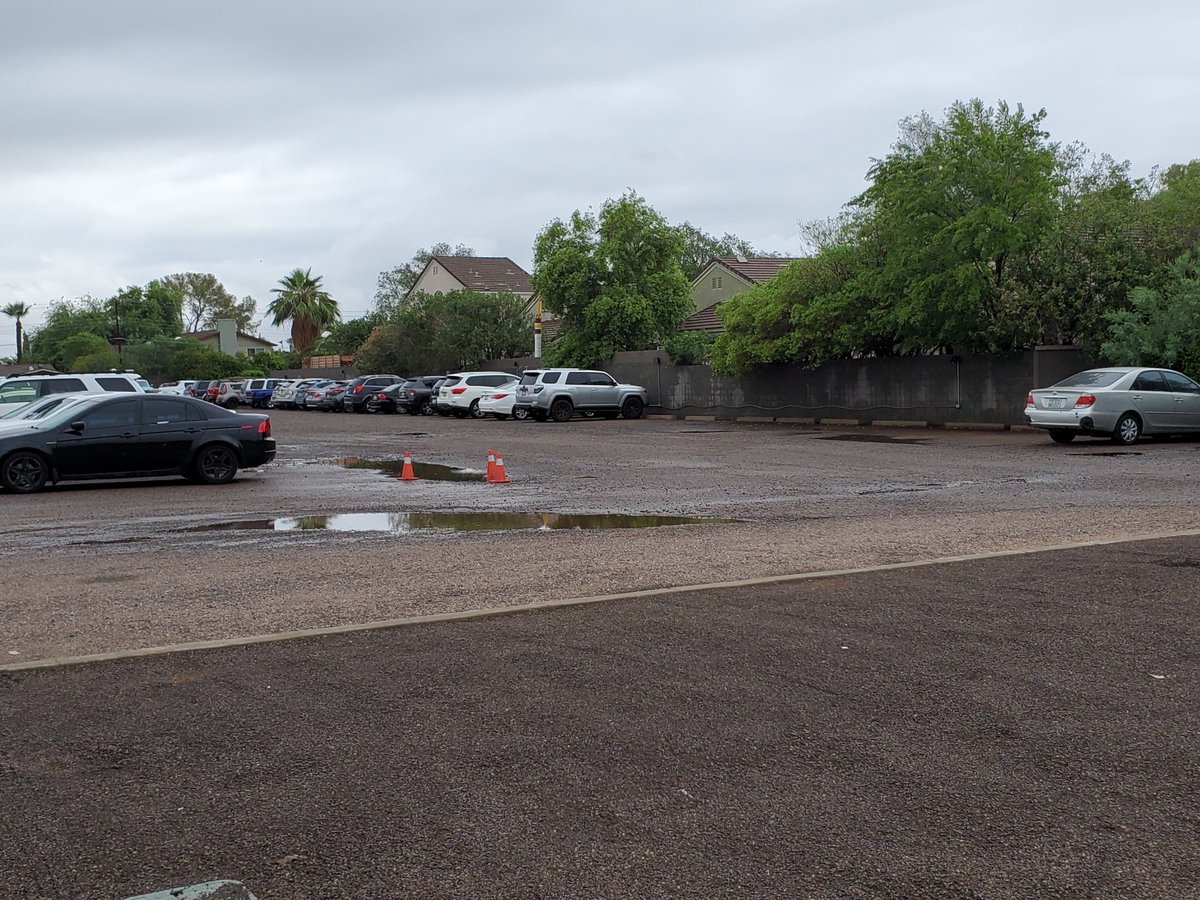