“Bit by bit, Dr. Driscoll helped me to peel away the layers of protection I had built up over the years. The process was not that unlike the peeling of an onion, which also makes us cry. It has been a painful journey, and I don't now when it will end, when I can say, “OK, it's over.” Maybe never. Maybe sooner than I know. I recently told Dr. Driscoll that I feel the beginnings of feeling OK, that this is the right path.”
― Charles L. Bailey Jr., In the Shadow of the Cross link 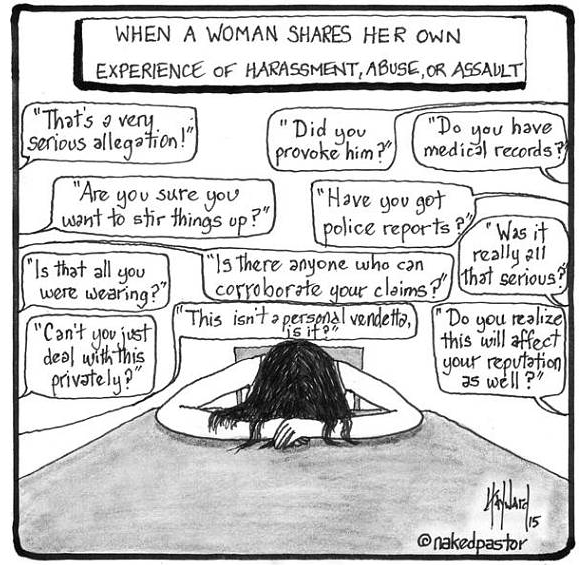 Update 9/26/17: The link to the second TMU statement no longer works.  Thankfully I copied the entire text into this post so it is going to stay up. The game is afoot!

The Deebs want to continue the discussion on Jane's story. Let's analyze the responses to Jane's story and then point to another situation going on the Reformed community in which a woman, who was abused by her husband, is being further abused by the responses of the pastors and PCA presbytery. We are concerned that reports of this sort are on the rise in churches and Christian organizations. The Gospel demands that we deal with these accusations in a manner worthy of the Lord we follow. Even if Christians believe a charge is unwarranted, we must act in love not like attack dogs from hell.

Some observations on the comments we received on TWW about Jane's story.

We would like to hear your thoughts on the comments.

It looks like they tried to include a bit of compassion in this one. Update 9.26/17 Hmmm…. the link is no longer working. I will keep up the statement which I copied directly from the former link. The game is afoot!

Sept. 24, 2017: At The Master's University, we consider the spiritual and physical well-being of the students under our care to be of the utmost importance. That is why the referenced blog, regardless of whether we disagree with its portrayal, is particularly difficult to read. As with the alleged attack from 2006, it has been and is the practice of The Master's University to both comply with California's mandatory reporting obligations, and also strongly urge all crime victims to make a prompt and full report to the police. We believe those steps were followed in connection with this matter, in addition to the extension of love and concern from our faculty, staff and fellow students. That does not mean, however, that enduring pain and heartache from those events is not genuine. Unfortunately, until the female student provides TMU permission to discuss and/or share her records, we are legally unable to comment on the allegations posted online. Our prayers go out to those involved, and our best comfort is the certain knowledge that there is healing, peace, forgiveness, and redemption in Jesus Christ.

However, I think they could have released more information without releasing the student's records. For example, I would think it might be interesting to see if the school ever allowed a counseling pastor in Grace Community Church to counsel a Master's University student. Since they know the alleged rapist (they said he wasn't a seminary student), they could have said that he was connected through the church. That, in itself, would prove that it was possible for Jane to believe that he was affiliated with TMU/Seminary.

Also if they allowed a counseling pastor, like Rick Holland, for example, to counsel Jane and her rapist, why was he allowed to work with Joe Keller from TMU who was responsible for her discipline? I think it might be a bit dicey to share counseling tidbits from the church with TMU. Yet Jane was told she was to be counseled by both Holland and Keller.

Becky Castle Miller, writing for Scot McKnight's Jesus Creed, posted Jane’s Story and How The Leaders Failed Her. They had me at the title of the post. No matter the outcome of this story (let me reiterate "I believe Jane"), there is little doubt in my mind that things were not handled in a thoughtful, compassionate manner by TMU,TMS or Grace Community Church. This includes John MacArthur. No, I don't care how hard they try to protect John MacArthur, any real leader will confess that the buck stops with the big guy. This should bring on the wrath of the MacArthurites (rhymes with Amalekites).

I love the way the post is written. She outlines the failure of different groups like the police, the resident director, the campus pastor and the Biblical counselor, to name a few.

Here are a couple of quotes from the post.

I am meeting with Rick Holland—the college pastor for the church that is affiliated with the college. We are alone in his office… He insists I tell him everything. He asks me questions like: Where did he touch you? Where else did he touch you? What exactly did he do? How long did he do that? What were you wearing? Are you dating him? Did he turn you on?

These are wildly inappropriate questions. Pastors providing care for victims should never force details out of victims. Realize that the telling of these details can re-traumatize someone, so let them set the pace and tone of the conversation. Let them speak to the extent they recall and are comfortable speaking. Understand that every piece of their stories they trust you with is a precious gift. You are honored with their confidence. Don’t betray it with a voyeuristic line of questioning to satisfy a morbid curiosity. You are listening to offer healing, not listening to cross-examine and judge. You are not a judge; you are a pastor.

My parents are coming to get me. I need to get out of here anyway. They are angry not only for what has happened to me, but how it is being handled… My dad has a man-to-man talk with Joe Keller… I am comforted by my parents’ anger, but I hold them back from their need to bring about justice.

Jane’s parents handle this well. As she says, the righteous anger her parents feel on her behalf brings her comfort. Where is this anger in every leader who hears Jane’s story? Each of them should feel God’s fury at the injustice of the stranger toward Jane, and each of them should help Jane move toward receiving justice.

A suggestion for John MacArthur

You know who the victim is. Why don't you release a statement saying you are praying for her and that you want to do everything in your power to make this right? Admit that Christians can screw up badly on occasion. Be the one showering her with love by demonstrating your humility. I bet that if you really wanted to make this right, you could. Do not delegate it to the little guys circling the wagons. Boy, do they ever say some stupid stuff. This is not a battlefield to be conquered. This is about pain and love is the answer.

The story of the poor treatment of another abused woman in the PCA is making the rounds.

TMU leadrrship is not the only Christian organization doing a poor job handling charges of abuse.You need to read these two links at The Aquila Report.

Who is Jessica and what happened?

Jessica was being abused in her marriage and she was consequently fired from her church job for refusing to return to her abusive husband. Some of these PCA churches love to tell women that *abuse* is no reason to leave a marriage.

Jessica’s case is long and complex, going back at least five years. It involves a PCA church firing Jessica from her job as worship leader for refusing to move back in with her abusive husband. It involves a more recent dispute with members of the congregation which had resulted in the leaders of her small group allegedly removing her without due process. It involves a nearly two-hour phone call with the clerk of her presbytery, who called her story ‘crap’ and told her she was a ‘pariah,’ ‘coercive,’ ‘violent,’ ‘frightening,’ ‘aggressive,’ a ‘tormentor’, an ‘abuser,’ a ‘threat to our church.’ It involves numerous attempts by Jessica to file complaints related to these matters, only to be frustrated for years by delays and administrative red tape. It involves Jessica’s session eventually indicting her, though these charges were later dropped.

Jessica is indicted and she begins to answer back with an awesome painted dress. (I would love to see  picture of this.)

Jessica began to feel ever more invisible. Desperate to be seen and heard, she painted a dress with all of the names the clerk had called her and wore it to presbytery. She began carrying a sign reading ‘Justice not abuse’ with her to church and placing it at her feet during worship as a form of lament. She showed up unannounced at the small group who had turned her out and shared her struggles as a prayer request. She began speaking publicly about her complaints on social media. Unsubstantiated rumors sprang up in abundance out of the false peace she had unsettled and began to fly: She carries a gun; she is dangerous; I’m afraid of her. The portrait of Jessica as a deviant oppressor took on flesh in abundance.

All came to a head. In September, 2016, Jessica filed a formal complaint against the clerk, against the advice of the shepherding committee. Also in September, 2016, her session indicted her. They charged her with contempt towards church leadership, focusing on three specifications: (1) escalating her complaint against members of her former small group by sending open letters; (2) refusing to comply with the session’s directive to cease from bringing a sign to church and (3) likewise refusing to cease from attending her small group.

What were some of the words that the PCA clerk used against her?

We will be covering this story more in depth soon but I put it here so that our readers become aware of the tactics, especially words, used against abused women. I have news for the supposed *gospelly* people speaking to a hurting person in this manner. It may be *gospelly* and acceptable in some Reformed churches, but it ain't the Gospel.