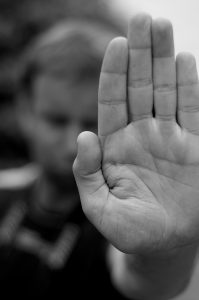 This post and the articles that will be highlighted contains disturbing and triggering information.

Silence is definitely not golden when it comes to the sexual abuse of children (or anyone else for that matter!). We are so grateful that child sex abuse has been the focus of several articles that recently appeared in online media. One such article was published by New Republic, a journal that has been tackling critical issues for over 100 years. These journalists discuss complex issues and take a stand with the intention of bringing about change.

On June 20, 2017, New Republic featured an eye-opening article entitled The Silence of the Lambs, which focuses on abuses that occurred for decades in the Association of Baptists for World Evangelism (ABWE).

FYI – it was five years ago yesterday that Dee provided a timeline of events in the life of Dr. Donn Ketcham, who is the focus of the New Republic piece. it might be helpful to take a quick look at Dee's post An Unholy and Despicable Coverup of Pedophilia by the Association of Baptists for World Evangelism before reading further. In that post Dee wrote:

One of the most well-documented cases of  pedophilia on the mission field comes from a group of brave and dedicated adult missionary kids who were abused by a doctor in Bangladesh. This story is  the cause of my 4th of July pacing. I am outraged by the incredibly stupid, unloving, and un-Christian responses by the leaders of  ABWE (Association of Baptists for World Evangelism).

The Silence of the Lambs article goes into great detail regarding Dr. Donn Ketcham and his sexual improprieties with a young innocent girl. Kathryn Joyce has done an excellent job of retelling this horrific story. According to the article, Donn Ketcham's father co-founded the Baptist denomination that was sponsoring the missionary group, called the Association of Baptists for World Evangelism (ABWE). Joyce goes on to explain: 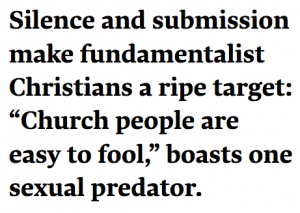 Its goal was to create a “militant, missionary-minded, Biblically separate haven of Fundamentalism.” Little known outside the world of Christian fundamentalists, ABWE is among the largest missionary groups in the United States, deploying more than 900 Baptists to 70 countries. His father’s legacy made Ketcham a sort of prince within the world of ABWE: the doctor with the “magical name,” as one missionary later put it, much beloved by the family of churches that supported the group. He’d been the undisputed patriarch of the Bangladesh mission for almost three decades.

Rather than summarizing what occurred between Dr. Donn Ketcham and a missionary kid (MK) named Kim James, we encourage you to read the detailed account for yourself at this link.

Ketcham groomed and then sexually violated Kim when she was just 13. Katryn Joyce explains:

the potential for sexual abuse is actually exacerbated by the core identity of fundamentalist groups like ABWE. Like Catholics, fundamentalists preach strict obedience to religious authority. Sex is not only prohibited outside of marriage, but rarely discussed. These overlapping dynamics of silence and submission make conservative Christians a ripe target for sexual predators. As one convicted child abuser tells clinical psychologist Anna Salter in her book Predators: Pedophiles, Rapists, and Other Sex Offenders, “Church people are easy to fool.”

Over the past five years, in fact, it has become increasingly clear—even to some conservative Christians—that fundamentalist churches face a widespread epidemic of sexual abuse and institutional denial that could ultimately involve more victims than the pedophilia scandal in the Catholic Church. In 2012, an investigation at Bob Jones University, known as the “fortress of fundamentalism,” revealed that the school had systematically covered up allegations of sexual assault and counseled victims to forgive their attackers. Sovereign Grace, a network of “neo-Calvinist” churches, has been facing multiple allegations of child molestation and sexual abuse. In 2014, a New Republic investigation found that school officials at Patrick Henry College, a popular destination for Christian homeschoolers, had routinely responded to rape and harassment claims by treating perpetrators with impunity, discouraging women from going to the police, and blaming them for dressing immodestly.

The article also calls attention to allegations of sexual misconduct involving Doug Phillips, Bill Gothard, and Josh Duggar (all of which we have previously covered here at TWW).

The following excerpt was especially alarming:

The scale of potential abuse is huge. Evangelical Protestants far outnumber Catholics in the United States, with more than 280,000 churches, religious schools, and affiliated organizations. In 2007, the three leading insurance companies that provide coverage for the majority of Protestant institutions said they received an average of 260 reports per year of child sexual abuse at the hands of church leaders and members. By contrast, the Catholic Church was reporting 228 “credible accusations” per year.

According to the article, Boz Tchividjian, a former child sex-abuse prosecutor, the grandson of Billy Graham, and a very good friend of the Deebs, stated:

“Protestants have responded much worse than the Catholics to this issue…One of the reasons is that, like it or not, the Catholics have been forced, through three decades of lawsuits, to address this issue. We’ve never been forced to deal with it on a Protestant-wide basis.”

As most of our readers know, Boz Tchividjian founded an organization called GRACE, (Godly Response to Abuse in a Christian Environment) in order to investigate and expose sexual abuse in evangelical churches.

Boz went on to explain:

The authoritarianism that often prevails in fundamentalist circles is what sets the stage for widespread abuse—and for the systematic mishandling of reported cases. When you have so much concentrated authority, in so few fallible individuals, problems percolate. And when they do, they’re not often addressed. Because the leaders who hold all the authority decide what to do with them.

The New Republic article goes on to reveal:

– how terribly Kim James was treated by ABWE leaders

– that Kim tried (unsuccessfully) to commit suicide on several occasions

– that Donn Ketcham was a serial molester

Another online news service, The Daily Banter, just published a similar article entitled Conservative Christianity Has Enabled Pedophiles For Decades.  After reading the New Republic article as well as many of the posts we have written, does anyone doubt this?

Here is the Tweet that was sent out encouraging followers to read this Daily Banter article. 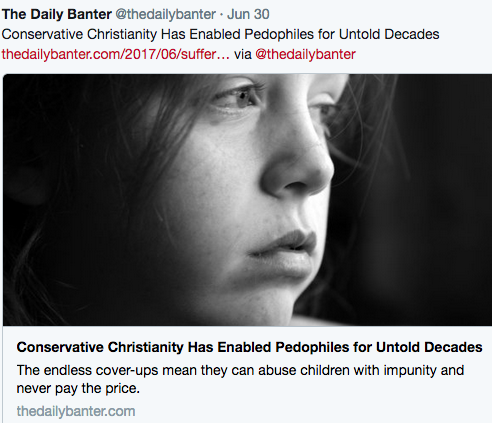 This article, written by Justin Rosario, has the following subtitle:

"The endless cover-ups mean they can abuse children with impunity and never pay the price."

Here is how Rosario begins his article:

Stop me if you've heard this before: A deeply religious man, beloved by his church/community, targets and grooms a young child for sexual abuse. The child tells an adult and they report it to the elders of the church. The church investigates the abuse and then sweeps it all under the rug. The deeply religious man is never reported to the police, the victim is blamed for seducing the man, and the man goes on to molest many other children, leaving a trail of scarred families in his wake.

Rosario then poses a question and attempts to come up with answers:

Why do the most pious always seem to be the most prone to this kind of problem? Two reasons come to mind. The first is that they tend to be incredibly authoritarian. Conservatives defer to those in power and conservative Christians even more so. Add to that mix the fundamentalist demand for blind obedience and you have all the ingredients for disaster…

The Daily Banter article calls attention to Kathyrn Joyce's article published by New Republic and recounts some of what was shared there.  The concluding paragraph of The Daily Banter piece is as follows:

Kim's story doesn't have a happy ending. Yet. Following 22 years of self harm and deep psychological damage, the full story came out in an extensive investigation. After years of being lied to by their church, Kim's parents didn't understand why their daughter was so damaged. Even Kim still blamed herself for the actions of a monster as well as her parents for not helping her. Now that it's all out in the open and Kim finally understands that she was a victim like so many other women, there's a chance for her and her family to heal. If only all of the victims of conservative Christianity were so lucky…

So when will child sex abuse at the hands of 'so-called' Christian leaders end? When each one of us refuses to remain silent. We MUST involve the proper authorities because these are criminal acts!  Please, please, if you know of a child who has been sexually abused, do the godly thing and notify the police!

Hopefully, those children that we collectively help will some day be able to sing this song (changing the lyrics to fit their particular circumstance) with confidence. 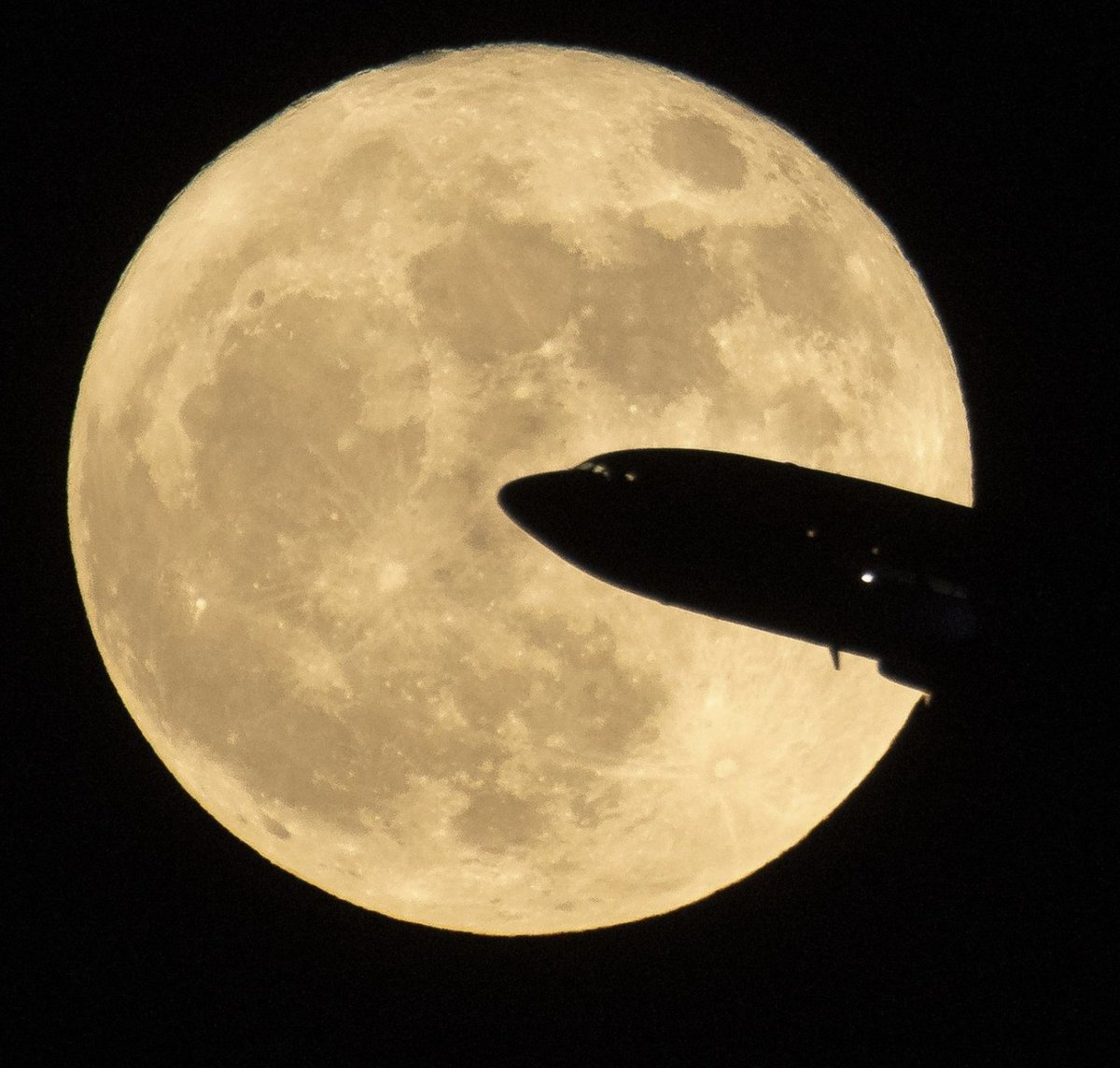