"I'm not retiring. Moving into a strategic role of raising up leaders and training the next generation." 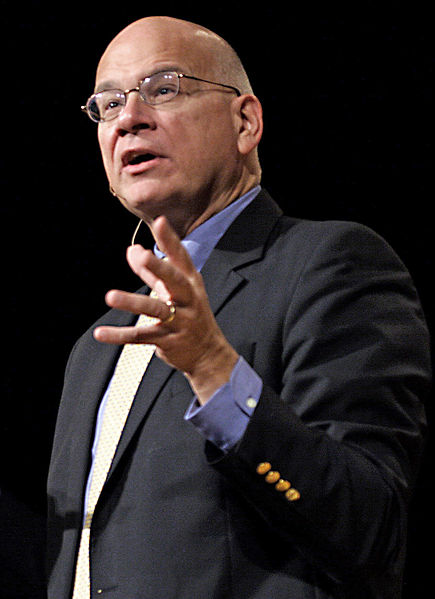 Yesterday news broke that Dr. Timothy Keller, who launched Redeemer Presbyterian Church in New York City together with his wife Kathy, will be stepping down July 1st. The church began 28 years ago (1989), has three locations, and has grown to roughly 5,300 attenders.

In addition, Timothy Keller co-founded The Gospel Coalition with Don (D.A.) Carson almost a decade ago.

Bethany Jenkins, who attends Redeemer and is involved with The Gospel Coalition broke the news via Twitter (see Tweet below): 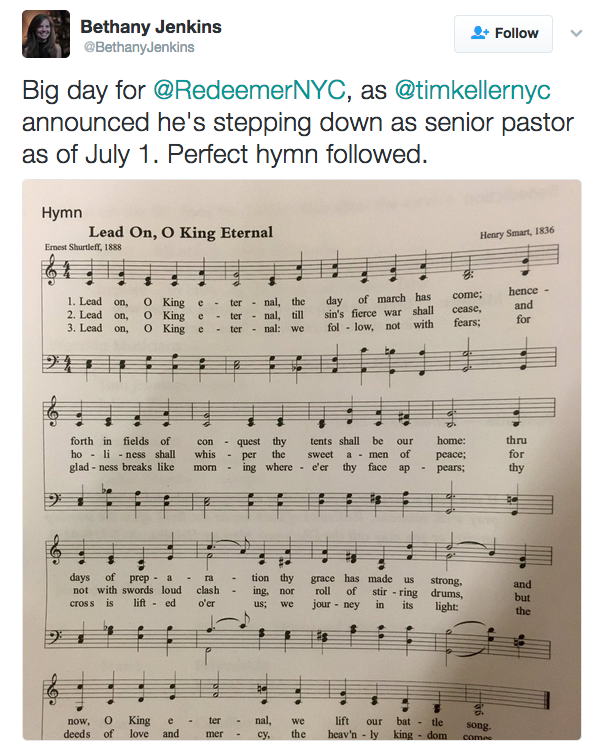 Yesterday afternoon Keller Tweeted that he was driving around to all of the church services (presumably to announce in person his next step in his ministerial career).

Someone on Twitter assumed that Timothy Keller would be retiring, but Keller was quick to point out that he has other plans (see Twitter exchange below).

Keller, 66, announced at all eight Sunday services today that he will be stepping down from the pulpit. The move corresponds with a decades-long plan to transition the single Presbyterian Church in America congregation—which has grown to 5,000 members since it began 28 years ago—into three particular churches.

His last day as senior pastor will be July 1.

This move does not mean retirement for Manhattan’s most popular evangelical pastor and apologist; instead, Keller will work full-time teaching in a partner program with Reformed Theological Seminary and working with Redeemer’s City to City church planting network.

“Kathy and I are not going anywhere. New York is our home, and you are our people. We’re not leaving New York or the fellowship of Redeemer,” he assured the church Sunday. “I’m becoming a teacher-trainer …. There’s going to have to be a dramatic increase in church leaders in this city if we’re going to start all these churches.”

The CT article points out that Keller made an announcement that was published on the church website (see screen shot below): 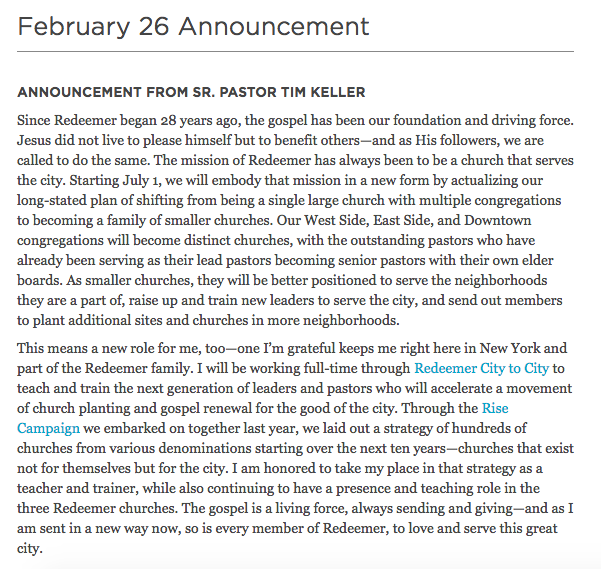 There are two interesting videos of Keller on the church website.

While many in the Redeemer Presbyterian congregation are going to miss their beloved pastor, Keller is (according to his wife)

“so wired” to teach seminary courses already, and is excited to dedicate himself to teaching the next generation of pastors.

The PCA's online magazine called byFaith provides even more details about Keller's transition to mentor of urban ministry leaders in its article Keller Shifts from Preaching to Teaching.

Here is an interesting Q & A from that article:

What are you trying to impart to these new leaders you are training?

“We want to form ministers and leaders who can minister the gospel in late modern culture and in urban centers. When it comes to our society today, some have argued that this one is harder to reach because it is post- and anti-Christian rather than simply non-Christian.  Getting across a concept of sin, or of self-giving discipleship, has never been more difficult.  Also a post- and anti-Christian culture does not simply oppose the gospel, but can also ‘colonize’ Christianity, producing hollowed out versions of the faith. All this presents unique challenges for ministry training that we want to address.  How do we preach, evangelize, and form solid Christians in such a culture?

When it comes to the urban environment, ministry here requires also a knowledge of urban life dynamics, urban social systems, cross-cultural communication, non-western Christianity, and many other subjects not covered in ordinary seminary programs. I also want to give more than the usual help on both expository preaching, on developing a life of prayer, on leading the church in an adverse cultural and financial environment, and on reading that provides cultural analysis and insight.  The combination of the M.A. (which in two years covers all the academic material, including languages and exegesis) together with the City Ministry Year will provide much more space for these than an ordinary M.Div. can.”

The Christianity Today article cited above reveals that…

Through the City to City church planting program, Redeemer has launched 381 churches in 54 cities worldwide.

Obviously, Keller plans to help grow those numbers in the decades to come as he invests much of his time and attention training the next generation of pastors. Thoughts?