"We apologize for this and for any concern this has caused for readers of the ESV, and we want to explain what we now believe to be the way forward. Our desire, above all, is to do what is right before the Lord." 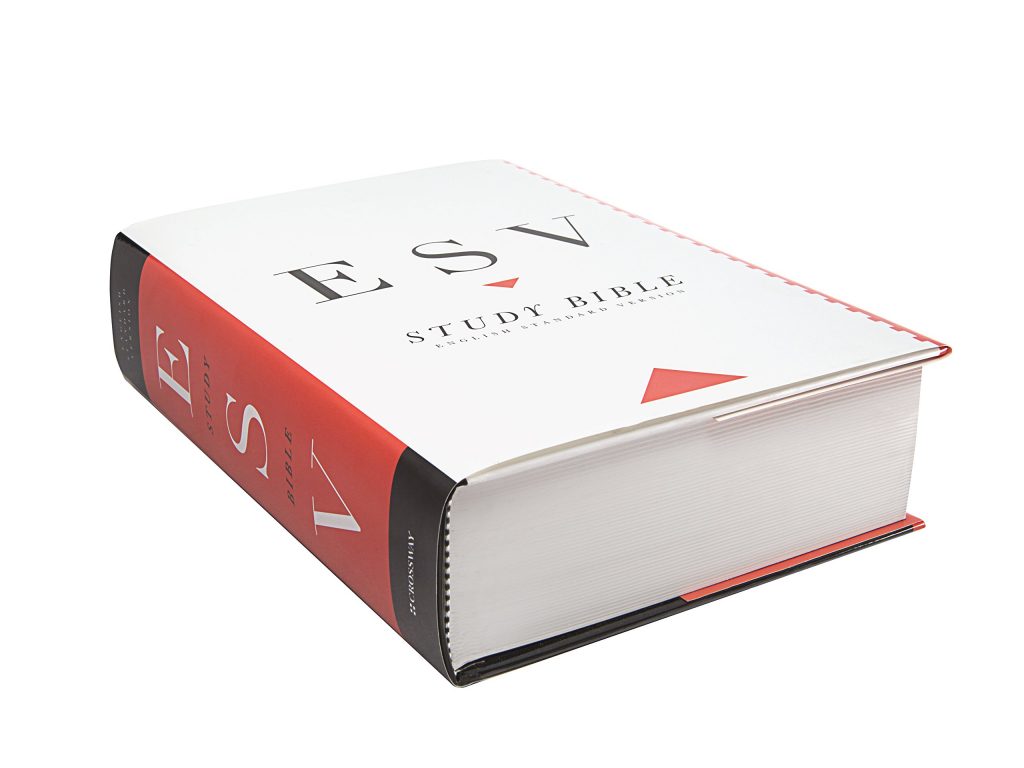 Last month Crossway Publishers' Board of Directors made a surprising announcement.  It had approved 52 word changes in 29 verses out of more than 775,000 words across more than 31,000 verses of the English Standard Version (ESV) and the ESV text would “remain unchanged in all future editions.”  Christianity Today shared this news in the following article — After Tweaking 29 Verses Bible Translation Becomes Unchanging Word of God.

We discussed these changes in our post entitled:  Can You REALLY Trust the English Standard Version (ESV)?  Included at the top of our post was the following quote from the ESV website (see screen shot below).

Funny thing…  when you click on the esv.org link, the following now appears:

What in the world is going on?  It appears Crossway's Board of Directors has just reversed its decision about the "permanent wording" of the ESV.  Christianity Today broke the news with its article entitled Crossway Reverses Decision to Make ESV Bible Text Permanent.  According to the CT article:

The publisher of the English Standard Version (ESV) of the Bible has reversed its controversial decision to finalize the text after tweaking 29 verses.

“We have become convinced that this decision was a mistake,” stated Crossway president and CEO Lane Dennis in an announcement released today. “We apologize for this and for any concern this has caused for readers of the ESV, and we want to explain what we now believe to be the way forward. Our desire, above all, is to do what is right before the Lord.”

The CT article went on to state that Scot McKnight (who had criticized the initial decision) and Desiring God editor Bryan DeWire tweeted favorable comments regarding this decision, which you can read here and here. 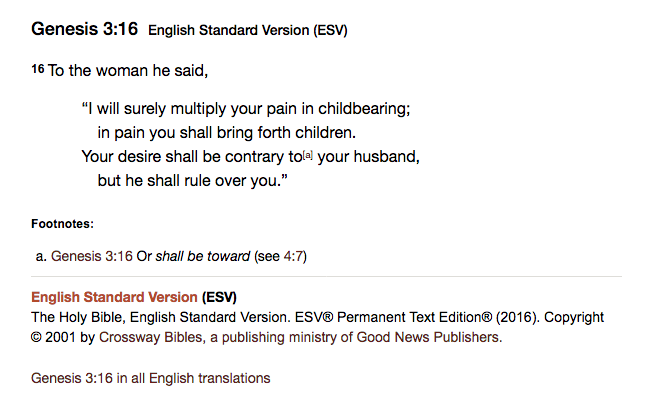 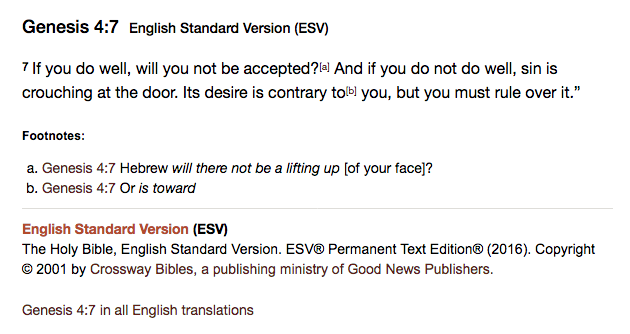 Here is a portion of the announcement just made by Lane T. Dennis PhD, President and CEO of Crossway (see screen shot below): 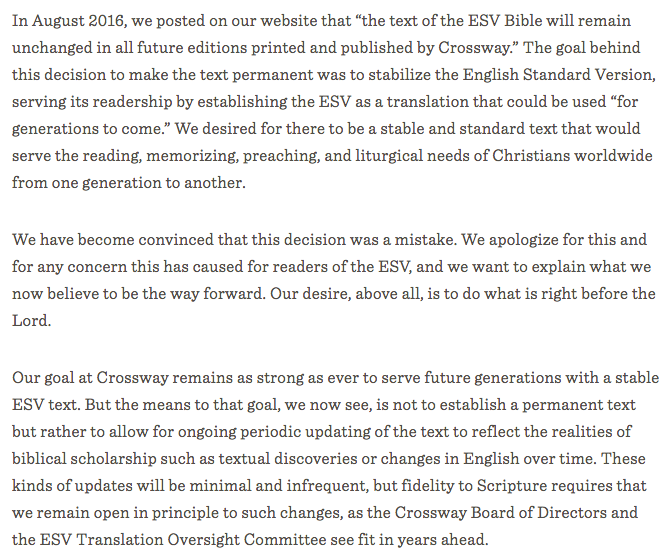 About 8 percent of American adults, and a surprising 15 percent of millennials, prefer it, according to the 2015 State of the Bible report. The ESV has become the third most requested translation for those doing Google searches for Bible verses, according to an analysis by OpenBible.info.

What we still cannot comprehend is why did the translation committee change the wording of Genesis 3:16 and Genesis 4:7 to mean the exact opposite of what is stated in other translations of the Bible.

We are grateful that so many have taken to social media and the internet to express their concerns for these changes.

Wendy Alsup and Hannah Anderson have been writing a series on these drastic changes over at Theology for Women.  It is entitled Toward a Better Reading: Reflections on the Permanent Changes to the text of Genesis 3:16 in the ESV, and you can access the first two installments here — Part 1  Part 2

Barbara Roberts, our Australian friend whom we met several years ago when she came to the states and who blogs over at A Cry for Justice along with Jeff Crippen, has written an outstanding article entitled — What is the woman's desire?  How Susan Foh's interpretation of Genesis 3:16 fed steroids to abusers.  It really is a must read!  You can access it here — Part 1  Part 2

We will continue to keep our readers informed about any future updates regarding the ESV.