"If people really feel they must be complementarians, they would be wise not to ground their views on such a very contentious re-interpretation of the Trinity." 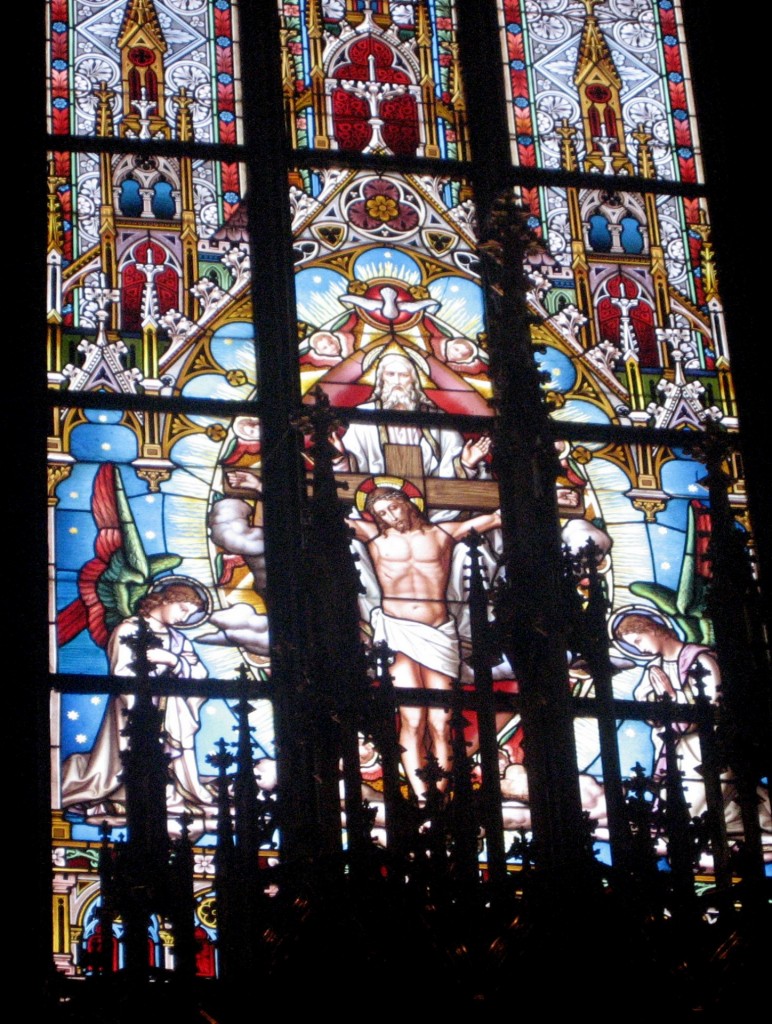 In God's sovereignty, the debate over the Trinity is reaching a fevered pitch.  Thanks to the internet, information on the Eternal Subordination of the Son to the Father (ESS) is being communicated far beyond the complementarian circle where it was promoted and applied for decades.

Better fasten your seat belt because we predict things are only going to get more turbulent in the coming months.  Why?  Because when the Evangelical Theological Society convenes in mid-November, the topic of discussion will be… (see screen shot below)

The leaders of the complementarian movement have much at stake in this debate, and we will do our best to monitor their responses to those who are challenging their doctrinal position on the Trinity.  We have already published several posts on this controversial topic, which we encourage you to read (see links below).

Unorthodox Views on the Trinity – Round Two

This debate was sparked exactly two months ago by a post entitled Is it Okay to Teach a Complementarianism Based on Eternal Subordination? over at Mortification of Spin (MOS).  MOS is "a casual conversation from the Alliance of Confessing Evangelicals featuring Carl Trueman, Todd Pruitt, and Aimee Byrd".  That guest post was written by by Dr. Liam Goligher, along with a follow-up post titled Reinventing God.  Here is a screen shot of Dr. Goligher's conclusion: 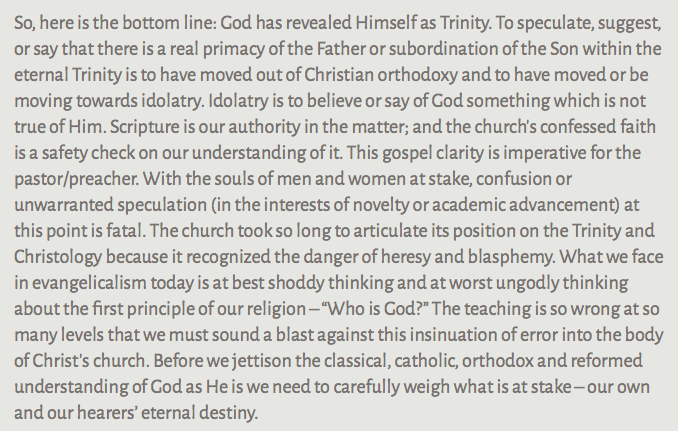 Dr. Goligher, who currently serves as Senior Minister of Tenth Presbyterian Church in Philadelphia, has ministered at churches in Ireland, Canada, London, England, and his native, Scotland according to his bio.  Therefore, it came as no surprise that Christians across the pond are following this theological controversy.

ChristianToday (not to be confused with Christianity Today), recently published an article entitled:

Complementarianism and the Trinity:  Is Wayne Grudem a dangerous heretic?

The "complementarianian" view of male-female relations – that men and women are prescribed different, heirarchical roles which above all mean that women cannot preach or be church leaders – is a growing force in modern evangelicalism.

Ah. But I thought the doctrine of the Trinity was pretty much settled?

It was, and most people would say it is. The idea that God is one, in three persons, is a core Christian belief that was thrashed out in the early centuries of the Church and expressed in the creeds that are accepted across all Christian confessions. A key component of this doctrine, established at the fourth-century Council of Nicea, is that Father, Son and Holy Spirit are distinguished in their roles and functions (the 'economic Trinity', but equal (as the 'immanent' or 'ontological' Trinity'). Nicea was called in response to the threat to orthodoxy posed by the heretic Arius and his followers (the "Arians"). Arius taught that the Son was subordinate to the Father because he was created by him and homoiousios, "of a similar substance", a view rejected by the Council, which held they were homoousios or "of the same substance". So the difference between heresy and orthodoxy is a single letter, which is rather alarming.

Alarming is right!  The article goes on to explain what kicked off the debate.  It should come as no surprise that Dr. Goligher is highly respected by those at ChristianToday. (see screen shot below) 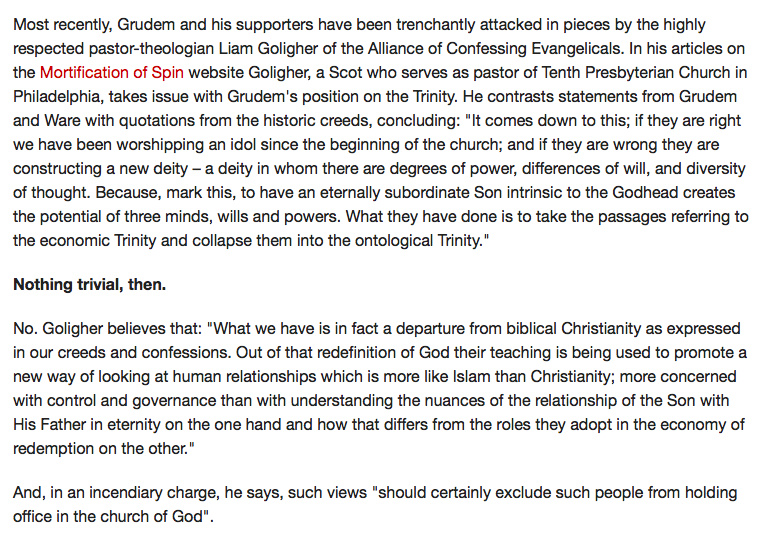 Thanks to publications like ChristianToday and the World Wide Web, this dispute is being widely circulated, and that's a very good thing!  We are grateful to Dr. Goligher and the hosts at Mortification of Spin for challenging this entrenched position in the complementarian camp.

As you might imagine, Wayne Grudem and Bruce Ware, among others, have responded to this criticism, which is mentioned in the article. Since the majority of people reading this piece are not theologians, Mark Woods (the contributing editor) shares three important things we need to recognize:

First, while the proponents of homoian complementarianism, as Bird calls it, might argue that their views are consistent with historic Christianity, most scholars and theologians haven't expressed their belief in the Trinity like that and many experts in the field are pretty scathing about it. So it is, to that extent, a new way of talking about this doctrine that is, as Goligher says, open to serious criticism. We should be very slow to accept theological novelties.

Second, the Trinity is one thing and complementarianism is another. While some proponents of the new thinking might deny that they're linked in essence, in practice homoian complementarians have a social agenda. We should be very suspicious of any theology that rewrites millennia of tradition to serve the priorities of the moment.

Third, homoian complementarians are part of a very influential movement in modern theology and churchmanship. It's socially right-wing, deeply conservative and neo-Calvinist, with deep pockets, charismatic and successful figureheads and granite certainties. That doesn't make it right.

No doubt this discussion regarding the Trinity will play out for years, if not decades, to come as the article states.  As Woods wraps up his article, he wisely writes:

But in the meantime, if people really feel they must be complementarians, they would be wise not to ground their views on such a very contentious re-interpretation of the Trinity.

Carl Trueman over at Mortification of Spin made the same point in a broadcast a few weeks ago.

Can there be any doubt that Wayne Grudem loyalists in the U.K. are beside themselves over this controversial headline regarding their hero of the faith. (see video below)

We will have much more on this important topic in the weeks and months ahead.  While we are grateful that ESS [or whatever other variations it is called] is being more widely discussed, we hope and pray it doesn't linger on for decades.  We want to live long enough to see it put to rest…