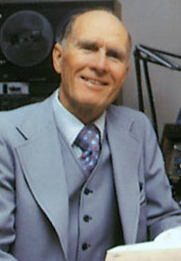 We are continuing our focus on 'teen homes' supported by Independent Fundamentalist Baptist (IFB) churches.  In this post we will introduce you to the man who has been credited with being the founder of these homes — Lester Roloff.  Roloff was born in 1914 in Dawson, Texas.  He grew up on a farm and learned the value of hard work from an early age, according to his ministry website.  Of course, many in his generation were raised on farms and also knew the value of hard work – just sayin'.

Roloff was 'saved' during his early teens and later decided to become a preacher.  In order to prepare for the ministry, he first attended Baylor University.  While in college, he married Marie Brady, and they quickly began their family.  After graduating from Baylor, he and his wife moved to Fort Worth, Texas so Roloff could attend Southwestern Seminary.  He pastored several churches, and later moved to Corpus Christi, Texas where he was called to pastor Park Avenue Baptist Church (which would later become known as Second Baptist Church).  While there, Roloff became a popular speaker at revival services and evangelistic gatherings.

According to his bio,

In 1951, Brother Roloff left the pastorate of Second Baptist and became a full-time evangelist and radio minister. That same year, he founded Roloff Evangelistic Enterprises, Inc., as a non-profit, tax-exempt corporation to coordinate all his ministries.

He conducted revival meetings in tents across much of the central and south east portions of the United States. As his ministry grew, he also felt he needed a church home from which to base his work. This led to his founding of the Alameda Baptist Church in Corpus Christi in 1954.

While at Alameda Baptist Church, Roloff began an outreach for alcoholic men.  That was in 1951.  Seven years later (1958), he founded  The Lighthouse for Boys — a place to sober up delinquent boys.  According to the website,

“The Lighthouse” was “a place for delinquent boys to be isolated from drugs and liquor until they were delivered. It its first seven years of operation, there were “almost six hundred boys who found their first real home at The Lighthouse.”

Nine years later (1967) Roloff became aware of the need for a home for unwed pregnant girls.  Not long after this realization, the Rebekah Home for Girls was established near Corpus Christi, Texas.  Subsequently, the Texas Welfare Department decided that in order for the home to operate, it must be licensed by the state of Texas.  Roloff strongly objected to any oversight by stating:

“licensing these homes is as unnecessary and wrong as licensing a church, … at issue is the constitutional principle of separation of church and state. This plainly is government interference with religion. …

Roloff is highly regarded in certain Christian circles (particularly IFB with which he aligned himself in 1956) for fighting against state regulation of these homes.  He even went to jail twice for failing to abide by court orders.  According to the Roloff Evangelistic Enterprises website:

Ownership of the homes was ultimately transferred from Roloff Evangelistic Enterprises, Inc. to the Peoples Baptist Church. Brother Roloff continued to fight to keep the homes for children open under the umbrella of Peoples Baptist Church. At the end of a long court battle, the Supreme Court of the United States refused to hear the appeal that would allow the homes to remain unlicensed and open.

The long legal battle took a heavy toll on Brother Roloff’s health, the finances of the ministry and on his personal finances. Till the very end, Brother and Mrs. Roloff lived modestly and committed all of themselves and their resources to their ministry.

﻿The Wiki article on Lester Roloff provides the following information regarding his refusal to comply with state regulations of these homes:

Some of the homes were temporarily closed in 1973 because Roloff refused on church-state issues to license the home through the state government. The institutions re-opened in 1974 after Roloff successfully appealed to the Texas Supreme Court which ruled in Roloff's favor that it was unconstitutional to close the homes down. At one point, Roloff transferred ownership of the homes from his evangelistic corporation to his church, thus compelling the state to sue the "new" owners (and restart the entire litigation) while he kept the homes running. The Attorney General refiled the case and secured an injunction that tried to shut down the ministry. In 1975, the state passed laws that required the licensing of youth homes. Roloff was arrested twice for refusing to comply with this law.

In 1979, in an incident known as the "Christian Alamo", Roloff urged churches and pastors across America who supported the Roloff ministry to come to Corpus Christi and form a human chain around the church to prevent the Texas Department of Human Resources from removing children from the homes. Legal battles with the State of Texas continued, and the homes were closed and re-opened…

﻿The Patheos website has a helpful timeline regarding Roloff Ministries and its founder's resistance to government oversight.  Another excellent website that discusses these specifics is here.

Roloff, who had an extensive speaking schedule, was a licensed pilot.  On the morning of November 2, 1982, he and a girl vocal group took off from Corpus Christi to embark on a seven day preaching tour.  The plane he was piloting crashed near Normangee, Texas (about 100 miles north of Houston).  There were no survivors.

Although Lester Roloff's life was cut short, his legacy continues.  Not only did he establish a number of homes for troubled boys, girls, alcoholic men, etc, but he inspired the establishment of other homes like New Bethany Home for Girls, which we discussed last week.

Lester Roloff has been memorialized at Hyles-Anderson College by having a park named after him, and he was posthumously inducted into National Religious Broadcasters Hall of Fame in 1993.  Those in the IFB laud him as a true hero of the faith.

Over twenty years have passed since that NRB award was given, and Lester Roloff's legacy appears to be extremely tarnished by the abuse stories stemming from the teen homes he established and inspired.  In our upcoming post, we will take a closer look at the Rebekah Home for Girls, established by Roloff.  The survivors have ben bravely speaking out, and we will be sharing their painful testimonies.