"It’s time to answer the question, 'Are your desires fulfilled in a sexual fantasy, or a relational reality?' " 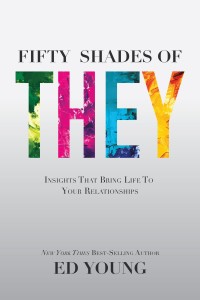 ﻿Did you happen to see this headline over at The Christian Post?  Megachurch Pastor Ed Young to Baptize Copies of 'Fifty Shades of Grey;' Calls Book a 'Perverted Attempt to Trap Readers'? link

Just over a week before the steamy "Fifty Shades of Grey" movie opens on Valentine's weekend, controversial founding pastor of the popular Fellowship Church in Dallas, Texas, Ed Young, says he will baptize copies of the book on which the movie is based, calling it a "perverted attempt to trap readers."

"There is a cultural epidemic out there that is wrapped up in complete fantasy. The book, Fifty Shades of Grey, is a perverted attempt to trap readers and leads them to a misunderstanding of what intimacy and connection are all about," said Young in a press statement Wednesday.

And here is an excerpt from the megachurch pastor's press release:

Young says, “The sad thing is that so many have fallen prey to what that book represents and have missed out on the truth that God has a better way and purpose for them. By baptizing the fantasy of that book and raising to life the reality of God’s plan, I want to show people that it comes down to one thing – fantasy vs. reality!”

In his newest book and coinciding teaching series aptly titled, “Fifty Shades of They,” Pastor Young unpacks the potential and power of healthy relationships – from acquaintances to close friends.  Ed says, “You show me your friends and I’ll show you your future. Relationships drive so much of our lives. It’s time to start looking realizing the truth and put away the twisted falsehood. And it’s time to answer the question, ‘Are your desires fulfilled in a sexual fantasy, or a relational reality?”

Looks like Young is right on cue.  Once again, he has taken a gimmick and piggybacked on itt for his own notoriety.  Amid all the hype about Fifty Shades of Grey, Young recently released his latest book Fifty Shades of They.  Now don't get me wrong — Ed Young Jr. and I are definitely on the same page when it comes to Fifty Shades of Grey.  I have never read the book and will never watch the movie.  I refuse to corrupt my mind with such filth.

Instead of just issuing a strong warning about Fifty Shade of Grey, Young takes his protest to a 'whole nutha level' by writing his own book with a copycat title.  In recent weeks he has been promoting Fifty Shades of They through a sermon series, which you can access on YouTube if you're interested.

Getting back to the book, the cover states that Ed Young is a 'New York Times Bestselling Author'.  We all know how that works, don't we?  The book even has its own website and is also being offered on Amazon.com.  At the time of this writing, there are 33 customer reviews over at Amazon, and they all have five star ratings.  Interestingly, almost all of these reviews were posted on the very same day — February 11, 2015.  Hmmm……

Here is how Young is promoting his latest and greatest work…

It is incredible how Ed Young uses copycat tactics to propel himself into the spotlight.  The first time we recognized it was back in 2008 when we were starting to research a variety of Christian topics on the internet.  On February 20, 2008, Paul Wirth (a pastor at Relevant Church near Tampa, Florida) was interviewed on CBS News.  He had just issued a 30 Day Sex Challenge to married couples in his congregation.  Here is an excerpt from the accompanying article at CBS News:

The pastor of a southwest Florida church opened many eyes and ears Sunday when he said he wants married couples in the congregation to — have sex for 30 days in a row.

Oh — and he wants singles to steer clear of such frolicking for the same length of time.

Head pastor Paul Wirth of Relevant Church in Ybor City, outside Tampa, says his "30-Day Sex Challenge" is one way of taking on the nation's 50-percent divorce rate.

Fast forward to November 2008…  Ed Young Jr. attracts national attention by presenting married couples in his congregation with a 7 Day Sex Challenge.  Keep in mind that Ed was Dee's pastor for a short time when she attended Fellowship Church just outside of Dallas.

That's why we were paying close attention to this marketing scheme at the time it occurred.

CBS News covered this story as well, and the reporters likely had a bout of déjà vu since they had covered Paul Wirth's 30 Day Sex Challenge just nine months before.  The CBS News article that accompanied the video interview with Young begins with this:

And several years later Young and his wife Lisa launched a similar campaign with their Sexperiment.  Once again, they marketed it to the hilt.  The Christian Post described the campaign this way:

Ed and Lisa Young, founders of Texas-based Fellowship Church, will spend 24 hours in bed on the church roof next week and stream themselves discussing sex live on the Internet to encourage married couples to see firsthand the power of a healthy sex life as prescribed in their new book, Sexperiment.

Two days after their book, Sexperiment: 7 Days to Lasting Intimacy with Your Spouse, is released Tuesday, the Youngs will take part in a 24-hour “bed-in,” which will be streamed on the book’s website as they engage the audience on issues related to intimacy in marriage.

I decided to watch some of the live coverage of this Sexperiment.  Toward the end, Young encountered a problem which prevented him from completing the 24 hour 'bed in' on the roof of his church (see below).

Ed and Lisa Young conduct a live 24-hour webcast from a bed on the rooftop of Fellowship Church in Grapevine, Texas, Friday, Jan. 13, 2012. The Youngs are talking about their new book Sexperiment and hoping to reclaim sex from the culture and convey the message that it's a gift God created for married couples.

Even though Ed Young is capitalizing on The Fifty Shades of Grey craze, we are grateful that his current copycat idea isn't based on sex this time…