"Drinking beer is easy. Trashing your hotel room is easy. But being a Christian, that's a tough call. That's rebellion." -Alice Cooper link 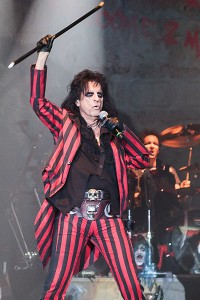 Today I learned that Alice Cooper is a *born again* Christian and doesn't like celebrity Christians. After proclaiming, "No way!" I did further reading and learned that it is true. I also learned that he did not bite the head off of a live chicken or a live bat and did not get the name of Alice Cooper from an Ouija board which somewhat relieved me. I was trying to figure out how I was going to explain this Alice Cooper Christian thing if animal heads were getting bitten off. From the Gospel Herald:

In a candid article from DC Beacon, Cooper publicly spoke at length for the first time about his love for God, despite the fact he continues to record and tour a theatrical horror-style show.

"My life is dedicated to follow Christ," Cooper declared.

According to DC Beacon, Cooper, who legally changed his name from Vince Furnier, has been credited with paving the way for performers such as Marilyn Manson. However, he contended that his act always had "a sense of humor" and never skewed political or religious.

From the UK's Independent:

If he really believed it all at the time he was drinking a bottle of whisky a day, and sleeping with every groupie who threw herself at him, he must surely have thought he was in trouble? “Oh, absolutely,” says Cooper again. “When I was at my height, I thought: 'If this plane is going down now, I'm going directly to Hell. I know that I owe my soul to Christ, but I'm betting that I can go one more day.'” When he finally sobered up, he realized he couldn't. For a moment, he thought he would have to give up being Alice Cooper, but luckily his pastor disagreed. “He said,” says Cooper, in the way you say something when you think you've won an argument, “'does God make mistakes?'”

God, says Cooper, “has a plan for everybody. I look at my life and I think, 'how is it possible that I didn't die?'”

According to the Gospel Herald, Cooper attends Camelback Bible Church in Arizona which he claims offers him good Bible teaching. Please notice that he does not name any celebrity pastors on the circuit, just the name of the church.

Now that he is trying to follow God's will in his life, he's made a few changes to his signature act. According to DC Beacon, some of his older repertoire is no longer performed, and any song that promotes promiscuous sex and drinking "gets the axe."

"I'm very careful about what the lyrics are," Cooper said. "I tried to write songs that were equally as good, only with a better message."

Cooper also changed his stage persona, seeing himself now as "the prophet of doom."

"Be careful! Satan is not a myth. Don't sit around pretending like Satan is just a joke," Cooper said about his new message. "I think my job is to warn about Satan."

In 'Why Alice Cooper Doesn’t Believe in ‘Celebrity Christianity’ from the website Ultimate Classic Rock, Cooper eschews the celebrity that would be offered him if he decided to "join the conference circuit."

Cooper says he doesn’t believe in “celebrity Christianity,” because “it’s really easy to focus on Alice Cooper and not on Christ. I’m a rock singer. I’m nothing more than that. I’m not a philosopher. I consider myself low on the totem pole of knowledgeable Christians. So, don’t look for answers from me.”

This last statement got me to thinking. Why is it that we use the names of the *celebrity* pastors who head the church instead of the name of the church? I meet people all the time who say they attend John Piper's former church, Chuck Swindoll's church, the church attended by Al Mohler, Alistair Beggs church, etc. Then, we quote Charles Spurgeon, Jonathan Edwards, John Calvin, Martin Luther, etc. as examples of really important Christians.

Why don't we speak more of the church and its members? If these are truly great leaders, shouldn't their particular church be more famous than the one guy who gives the sermon? If the pastors are truly doing their job of equipping the saints for the work of God, then the saints/church members should be the ones who are recognized by all, right?

In the early days of the church, it was the many new Christians, inspired by the Holy Spirit and encouraged by their leaders, who courageously went off to their executions in the Coliseum. Take the story of Perpetua as featured in Christianity Today. We do not know whose church she attended but we know how she stood up for the faith and died.

We have little idea what brought Perpetua to faith in Christ, or how long she had been a Christian, or how she lived her Christian life. Thanks to her diary, and that of another prisoner, we have some idea of her last days—an ordeal that so impressed the famous Augustine that he preached four sermons about her death.

Perpetua was a Christian noblewoman who, at the turn of the third century, lived with her husband, her son, and her slave, Felicitas, in Carthage (in modern Tunis). At this time, North Africa was the center of a vibrant Christian community. It is no surprise, then, that when Emperor Septimius Severus determined to cripple Christianity (he believed it undermined Roman patriotism), he focused his attention on North Africa. Among the first to be arrested were five new Christians taking classes to prepare for baptism, one of whom was Perpetua.

…Perpetua, her friends, and her slave, Felicitas (who had subsequently been arrested), were dressed in belted tunics. When they entered the stadium, wild beasts and gladiators roamed the arena floor, and in the stands, crowds roared to see blood. They didn't have to wait long.

Immediately a wild heifer charged the group. Perpetua was tossed into the air and onto her back. She sat up, adjusted her ripped tunic, and walked over to help Felicitas. Then a leopard was let loose, and it wasn't long before the tunics of the Christians were stained with blood.

At the end, Perpetua comforted her slave. There were many more like her. They were given the name of Christ followers, not followers of a particular celebrity apostle.

Recently, I read an article called Are Your People Real? 6 Marks of a Real Christian Inspired by Jonathan Edwards by Jeremy Bouma. First note the word "your people." In the post, Bouma is addressing this to pastors. However, shouldn't they be called Christ's people? He uses this phrase again in the post. I know he doesn't mean ill of this but I think it is time we reassess these pat terms.

Then notice that he mentions Jonathan Edwards.

In his book Religious Affection, Edwards answered his question by outlining twelve marks of genuine Christian faith. Inspired by this description, Wilson aims to provide the contemporary church with a similar description of what it means to be “real.”

But he does not mention Jonathan Edwards church. If Edwards was a great leader and equipper of the saints, then his church should be known as an incredible church that accomplished great things for the Lord. Instead, we keep talking about Edwards who was no doubt an accomplished preacher. Edwards himself said that it was important to examine the life of Christians.

Some criticized the emotional effects of the revivals. In 1746 Edwards published his important A Treatise Concerning Religious Affections, which examined the nature of true religion, which, he said, doesn't just understand the right doctrine, but touches the affections or the heart. Yet, the devil can counterfeit religious affections and imitate the conversion experience, producing outward emotional responses without a new heart of faith. The only way to tell if a conversion experience is genuine is to look at the individual's life. Humility and the love and pursuit of holiness mark true Christians. Those who simply boast of their experience without transformed lives are merely false professors of religion.

And yet, we still talk about Edwards as opposed to the members of the church and what they accomplished for the faith.

Bouma lists the 6 traits that pastors should see in *your* people.

Is this what we should see in *your* people or in all people, including the pastors? Do we assume that the pastors are somehow separated from *their* people? Is this why we are celebrity pastor oriented rather than church oriented? Will there be a day when we hear people say "I attend First Baptist Church" and people in the community say "I have heard of that church. The people help the poor, are kind to store clerks, serve those who are sick and are fun to be around?" Or will they instead of saying "Oh yeah, that's Joe Rich and Famous' church. I see him on Fox News a lot talking about being persecuted."

I think I like Alice Cooper a whole lot more that some of these famous Christians. He doesn't want to be a Christian celebrity. May his tribe increase.

I'm heading to Florida for my annual family vacation. This year, my daughter's fiancee joins us, and my other dgtr and husband's foster teen, who'll live with them until 18, join us. Someone from my church will live in at my house and take care of the pugs! I'll catch up shortly.
View on Twitter
0
8

"Sweden halts use of puberty blockers in gender-confused kids due to serious health risks" https://t.co/SRZ0ZPWti3
View on Twitter
0
1