"There are two equal and opposite errors into which our race can fall about the devils. One is to disbelieve in their existence. The other is to believe, and to feel an excessive and unhealthy interest in them. They themselves are equally pleased by both errors and hail a materialist or a magician with the same delight."- CS Lewis link 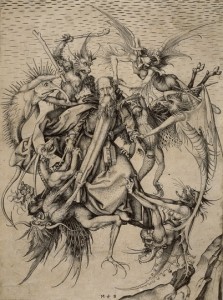 Continuing on in our series regarding the beliefs within the ARC family of churches, we turn to Morris' recommended books on *freedom.* You can learn a lot about a church just by focusing on books recommended by pastors. Before we get to Morris, let me give another example. As you know, TWW often focuses on authoritarian churches. We have observed that many such churches recommend Babywise by the Ezzos. What many people do not realize is that the the American Academy of Pediatrics has issued warnings about the methods described in book.

Therefore, if a church unequivocally recommends the book, they either have church leadership that is clueless or church leadership which thinks they are smarter than health professionals. What does that tell you about the church? If the leadership deliberately overlooks the serious issues raised by pediatricians, they most likely think that they *know better* in other areas as well. That could be an early warning sign that you have an authoritarian pastor.

In our previous post about Morris, we quoted from his Freedom Ministry position paper. If you scroll to the bottom of that paper, you will find that he recommends two books by Neil Anderson:

Always ask questions. Who is Neil Anderson and what does he teach? Once again, Google comes to the rescue. I did read The Bondage Breaker over a decade ago. However, pretending that I knew very little about this book, I decided to do some surfing.

According to his biography on Amazon

In many ways Neil Anderson is a respectable personality and teacher. Formerly the chairman of the Practical Theology department at Talbot School of Theology, he holds doctorates in ministry and education and served as a church pastor for 15 years prior to joining the Talbot faculty.

Anderson has many good things to say. However, just like Peter Wagner (we will be writing about him in the near future), he began to focus a great deal on Satan and demons. In this endeavor, he has made a number of fantastical claims (just like Wagner) which have detracted from his former academic thoughtfulness. In so doing, he appears to have fallen into the trap spelled out by CS Lewis.

There are two equal and opposite errors into which our race can fall about the devils. One is to disbelieve in their existence. The other is to believe, and to feel an excessive and unhealthy interest in them. They themselves are equally pleased by both errors and hail a materialist or a magician with the same delight.

Equip.Org wrote a fascinating paper on Neil Anderson which spells out the serious concerns that I have about his books and conclusions. Do not forget that the beliefs in this book are most likely being applied at Gateway Church. All quotes are from the Equip.Org.

Christians sin only because they think they are sinners.

The believer’s correct understanding of his or her identity in Christ is the critical issue in Christian sanctification. Christians continue to sin not so much for moral reasons as perceptual: they view themselves as sinners rather than as saints.

"Christians can be and often are demonized (indwelt and controlled by demons)."

Satan must be addressed out loud because he cannot read minds.

In order to have victory over the devil, Christians must learn to address him directly, and to do so out loud (since he can’t read their minds) — even in public places.

Do not talk out loud to God because Satan can hear you and presumably use it against you.

By the same token, Christians should be careful about what they say to God out loud, since Satan is listening and could use that information against them.

When you commit a sin (especially sexual), Satan can get into your life. Repentance does not protect you.

Every time one commits certain kinds of sin (e.g., sexual), Satan may gain entrance into one’s life. A general repentance of that sin may bring forgiveness, but it will not break any Satanic stronghold.

Every sin must be renounced verbally to get rid of Satan.

In order to get Satan out of one’s life, every instance of that sin must be identified and vocally renounced.

Every sin of your your ancestors must be renounced or you could be afflicted.

The need to identify and renounce past sins to be free of them is not limited to one’s own life but extends back to one’s ancestors,

Adopted children can be particularly afflicted (note the patronizing language)

…which makes adopted children especially vulnerable to demonic strongholds. Anderson assures us, however, that “even an adopted child can become a new creation in Christ.”

There is a vast satanic conspiracy which causes mental illness  and promotes ritual abuse.

More analysis of his views on mental health

Although he acknowledges that some mental problems are chemically induced, in practice he consistently opts for a spiritual (demonic) explanation when people come to him claiming that they hear voices speaking to them. Says Anderson, “I have counseled hundreds who were hearing voices, and every one of the voices was demonic” (emphasis added).’

13 He disparages the idea that chemical imbalances can produce “personal thoughts” (i.e., seemingly external voices speaking in one’s mind) or thoughts that people are seemingly opposed to thinking

14 Moreover, he promises that within a few hours his approach can eliminate mental struggles and voices tormenting all but a few out of hundreds."

15 Lack of long-term follow-up in many cases may mask the quick return of symptoms that would indicate a source and treatment other than those that Anderson proposes.

There are breeders in our churches who are producing babies to be ritually sacrificed.

Anderson claims to have first‐hand knowledge that our churches have been infiltrated: “There are breeders out there. We’ve encountered people who are doctors and lawyers and pastors who are Satanists.”

Satan is so enraged by Anderson’s ministry that he has launched fantastic physical attacks against him, such as biting Anderson on the hand

Satan writes messages to Anderson on his steamy bathroom mirror.

…and scrawling a message on his bathroom mirror.

You must pray certain prayers if you have been satanically cursed.

Anderson attributes real power to satanic curses and teaches they must be canceled through formulaic prayers.

Evil spirits can infest rooms in your home, clothing, etc.

…he teaches that evil spirits often attach themselves to the spaces and furnishings of a home.

Note: Perhaps this is where Pat Robertson got his notion that demons can affect Goodwill items? From the Huffington Post:

Robertson answered Carrie's question with a story about a girl who was troubled by a ring that had been prayed over by a witch. "She had to buy it and all hell broke loose because she finally recognized what it was," Robertson said, before claiming that demonic spirits can certainly attach themselves to objects.

Now, does this mean all second-hand clothing is a vessel of the devil? Not exactly, according to Robertson, but "it ain’t going to hurt anything to rebuke any spirits that happened to have attached themselves to those clothes.”

Parents should tell their kids that demons may be hiding in their rooms.

Demons are running around and having sex with humans. (I am not joking!)

… the medieval belief in spirits that have sexual relations with humans (incubi and sucubi ) is not only valid but an experience common enough to be included in the first of his seven “steps of freedom” as a possible past sin to be renounced.

Rebuke demons in each room in your house.
Anderson recommends that Christians go from room to room in a newly purchased house, rebuking demons. A friend who was reading this book along with me sarcastically queried:

"Is Jesus so weak that we literally have to go from room to room to make sure we get all those demons?

Please note that the name of Anderson's ministry is Freedom in Christ Ministries. Note that Robert Morris calls his position paper on demons Freedom Ministry and offers Freedom Classes. Coincidence? It appears that there is a close connection between the *doctrine* of Anderson and the *doctrine* of Morris.

This should make for a fun discussion.

@JTrott I've two pastors who've only exhibited and love, patience, and support for many years. I had two pastors in Dallas who have been supportive through the years. They are out there but they can be hard to find. I have had a few good experiences that help me deal with the bad ones.
View on Twitter
0
0

I just had my heart torn out. Have you heard of China Rescue Dogs? They rescue dogs from China's meat trade and bring them to the US to find them homes. https://t.co/Q5AhcyasSy
View on Twitter
1
1

Been on the receiving end of that one. https://t.co/pULSye5zuf
View on Twitter
0
3