“A leader is best when people barely know he exists, when his work is done, his aim fulfilled, they will say: we did it ourselves." Lao Tzu link 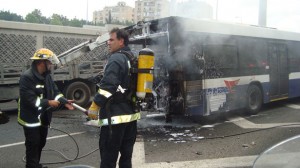 Over the last couple of years, some pastors, having read, or heard, Good to Great reinterpret Collins' discussion of "getting the right people on the bus." Like the sheep metaphor, these guys have not heard an allegory that can't screw up. No one is better at this than Mark Driscoll, the Stephen King of the bus ride from hell. I love this particular quote because it highlights his  self absorbed "vision" which includes piles of dead bodies that have been squashed by the Mars Hill bus. Link

"Here's what I've learned. You cast vision for your mission, and if people don't sign up, you move on. You move on. There are people that are gonna die in the wilderness, and there are people that are gonna take the hill. That's just how it is. Too many guys waste too much time trying to move stiff necked, stubborn, obstinate people. I am all about blessed subtraction. There is a pile of dead bodies behind the Mars Hill bus (chuckle), and by God's grace, it'll be a mountain by the time we're done…. ‎You either get on the bus, or you get run over by the bus. Those are the options." (P.73)

There is a problem with a charismatic leader who has unchallengeable vision.

Collins discusses the problems that develop when a charismatic leader becomes

you have a recipe for mediocrity. (P.72)

Even more importantly, Collins demonstrates throughout his book that

Winston Churchill had a bold vision for defeating the Nazis. However, he was also a wise leader who understood that his charismatic personality might make his advisors reticent to tell him any sort of bad news that detracted from his vision.

So, early in the war, he created an entirely separate department outside of the normal chain of command, called the Statistical Office, with the principle function of feeding him-continuously updated and completely unfiltered-the most brutal facts of reality. He relied heavily on this special unit throughout the war, repeatedly asking for fact, just the facts. (P. 73)

Today, within certain elements of the authoritarian evangelical subculture, vision casting is the new "winsome."  The really cool leaders often add the word "audacious" to make it sound exciting. "Audacious vision casting" involves coming up with an "over the top" idea that has been ratified by God through the obviously gifted, charismatic pastor. So, a little church in Florida claims they will plant 100 churches in 5 years. To question the validity of the vision is tantamount to questioning God's ability to perform this "miracle." Said questioner is not "the right person for the bus" and must be thrown off and run over for good measure.

If a visionary pastor has "yes men" on his bus, he has the wrong people on the bus.

Stop and think about it. Most people in churches want to learn about their faith. Many want to do missions. Lots of people want to serve others in their community. In other words, most people are already onboard with the Great Commission.

Then Jesus came to them and said, “All authority in heaven and on earth has been given to me. Therefore go and make disciples of all nations, baptizing them in the name of the Father and of the Son and of the Holy Spirit,  and teaching them to obey everything I have commanded you. And surely I am with you always, to the very end of the age.” (Matthew 28:18-20 NIV Gateway)

Everyone in the Body of Christ is given gifts to use within the Body.

Now you are the body of Christ, and each one of you is a part of it. And God has placed in the church first of all apostles, second prophets, third teachers, then miracles, then gifts of healing, of helping, of guidance, and of different kinds of tongues. (1 Cor12:27,28-NIV Gateway)

Therefore, it stands to reason that the bus driver better be paying attention to the input of ALL those on the bus, not merely the guys sitting up front. To purposely ignore their input is to guarantee that the church will miss something extremely important. Corinthians tells us this is true.

Real leaders create a climate that motivates people to share the truth.

Let me say this in another way. If a leader does not want to hear from anyone who disagrees with him, he is not a good leader. In fact, he can be dangerous since he will miss information. There is a difference between "being heard" and "having your say." In other words, a suggestion box in which all the suggestion are dumped out does no good.

Let's talk about elders for a minute. They are supposed to be those who keep things in check. I contend that, in most cases, they do not. They are often there just to ratify and defend anything the pastor says or wants.

I had a great discussion with a reader who sent me the makeup of the elder board at his church which has an authoritarian, charismatic pastor. There are 6 elders. One elder is the lead pastor and 2 other elders are underling pastors appointed by the lead pastor. Since this pastor has hiring and firing authority over his underlings, those 2 will, of course, go along with the pastor. The other 3 elders are supposedly from the congregation. One of them is the lead pastor's best friend. The other two were nominated by the previous elders and the lead pastor. Although the congregation could submit names, those were never considered. And, of course, the slate is always elected. This pastor now has complete control with little hope for disagreement. This makeup guarantees bad leadership.

What is needed is truth-brutal truth. Nothing sugar coated. So, how does a real leader create a climate where the truth can be heard?

1. Lead with questions, not answers. Spark a raucous debate. (P.74)

An authentic leader will know the questions to ask that will bring insights into the truth. These questions, often "why" questions, exist not to manipulate but to understand what the person is saying. Often times these questions are open ended. "Tell me what's on your mind." What do you think we should be worried about?"

When was the last time you heard a good debate with passionate responses from any church congregation. It is usually a ho-hum affair, usually because few people really care about it anyway. Why don't they care? Perhaps because they believe it will not make little difference?

-When was the last time that you saw the pastor of a large church go up to a person that has been attending but is not important and say "What do you think about things?" or "What would you change?" and really listen?

– How many of you, instead, have been excoriated by a pastor/elder when you suggested something different than the status quo?  How many of you have been blown off with a distracted nod or the dismissive quick pat on the shoulder?

I once belonged to a church that allowed women deacons, but not women elders or pastors. However, prior to that decision, there was much discussion and dissension. There were elders and church members who supported the idea of women elders. After much time and prayer, it was decided to agree to disagree. In order to preserve peace in the congregation, the "women as elders" faction backed down. But, in the church's statement of beliefs, the dissenting opinion was permanently posted because the opinion of those folks mattered. That is unity in diversity. It is OK to disagree and still remain a church body.

How many of you have ever seen a church statement that outlines the areas of disagreements?

Do you have a leader who can admit to his mistakes? Does your pastor try to maintain a certain image such as a visionary leader? Maybe he presents as a guy whose worse sin is that he occasionally breaks the speed limit (insert rueful chuckle)? Collins quotes Joe Cullman who discusses, candidly, the mistakes he made when his company bought the Seven-Up Company.

In an era when leaders go to great lengths to preserve the image of their own track record-stepping forth to claim credit about how they were visionary when their colleagues were not, but finding others to blame when their decisions go awry-it is quite refreshing to come across Cullman. He set the tone. "I will take responsibility for this bad decision. But we will all take responsibility for extracting the maximum learning from the tuition we've paid."

Recently, it was learned that three church plants started by Ed Stetzer (the guru of church plants) failed. Nothing was said. It was all hush hush. Why? Shouldn't we figure out what went wrong? Think about the T4G statement on CJ Mahaney. It disappeared. The authors were embarrassed by it. It appears that these so-called leaders have gone to great lengths to preserve their image at the expense of honesty which could benefit the church as a whole.

Most companies and churches have plenty of information. We live in an information age in which facts and figures are available to us in an instant. It is often difficult to sift through all of the data and figure out what is relevant. The "red flag" mechanism is quite simple. The people in leadership have a "no harm, no foul" response in place when an individual comes to them and says "I think you have a serious problem."

There is a church which received some early warnings about a staff member who was eventually arrested for pedophilia. The leadership got an alleged report from a young teen about some strange behavior about this man a year previous to the arrest.They chose to ignore the report, believing that the young man was just exaggerating. This young man was very involved in the church activities. He was present in situations with other teens when the pastors were not present. The pastors, instead, believed that they "knew" what was going on. Their inability to accept a "red flag" led to more teens being abused for another year.

The SGM Survivors blog has been around for years. There are literally thousands of comments alleging many, many concerning activities of pastoral negligence and child sex abuse. Yet, leaders throughout the country refuse to look at the red flags. Just this week, Wayne Grudem claims that CJ Mahaney has been unjustly accused.

These Neo-Calvinist leaders are living examples of the problems which are well outlined in the Chapter 4 which I have been reviewing.

Perhaps these are some clues that tell us why people are fleeing the church. One thing is certain: these guys do not think that it might involve them.