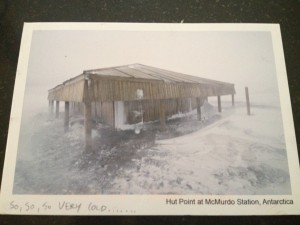 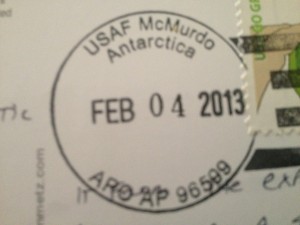 There are many reasons why I love blogging. Almost all of them involve connecting with people all over the world. I still remember getting our first visitors from the UK and Australia. Do you know how much I want to visit them? Since then our TWW community has expanded to areas like Sierra Leone, Japan, and Romania. A couple weeks ago we received an e-mail from someone who said they followed our blog from the McMurdo Station in Antarctica! I told said person that I would be really, really mad if they were lying. So, I received a picture of said person standing on the a frozen runway and then the postcard, above, as proof.

I joked with Deb that TWW serves the world-wide evangelical community Pole to Pole since we also have a reader in the Arctic Circle. I look forward to meeting him/her (keeping them anonymous as promised) when they return for a couple of months during the winter season. I am so excited because Antarctica is on my top 5 bucket list places to visit and now I know someone. How cool is that! Pun intended.

So, how is Dee going to morph that into today's post?  Well, when I realized that (s)he was telling the truth, I thought of a joke. I was sitting in church and started giggling, whispered it to my husband, and then we both kept snickering.  As many of you know, Presbyterians in bygone years have been called The Frozen Chosen. Well, I immediately wrote said Antarctican  (a U.S. citizen) an email with these words, "You are the Really Frozen Chosen!"  S(he) replied that it definitely had play because s(he) used to be Presbyterian. If you look closely on the card above, they wrote "So, So, So Very Cold."

Well, I believe that John Piper is "so, so, so very cold." In fact, he appears more deeply frozen than my new friend who lives part of the year at the bottom of the world. On Sunday, Piper had a starring role in the rehabilitation of the struggling SGM Louisville. I have embedded the video at the end of this post for you listening enjoyment. After CJ introduced Piper, Piper said the following

He remarked on SGM's church planting operation. I have two comments, neither of them complimentary (or complementary for that matter), that I want to address to John Piper.

The mass exodus of SGM churches Is NOT church planting. It is an unprecedented church "family" implosion.

John Piper failed to mention or ask a simple question, "What up with that?" Did it not cross his radar? What do they know that he doesn't know? I can assure you that churches don't leave because they are confidant in the godly leadership that Piper seems to love. Good night!

SGM may be planting churches but some of the plants, like in an episode of The X Files, are developing legs and getting the heck out of Dodge. SGM appears to have lost 20% of their churches, purportedly due to profound concerns about SGM as an oversight organization.

Were these former SGM churches all big or small churches? Many people do not understand that SGM churches are not huge. A few congregations are big but many are quite small in size. In fact, one of the most startling facts about this church exodus is that it is the high profile churches within SGM are leaving. This includes SGM's flagship church, Covenant Life Church, with former CJ groupie, Joshua Harris, at the helm.

Not only that, according to many reports over at SGM Survivors, some of the remaining churches are losing members, and the financial reports are not strong. In the meantime, the SGM hierarchy has spent a good deal of money on travel expenses at a time when the organization is losing money as churches leave. Here is a link to an interesting report on SGM travel expenses … I call it "The Show Must Go On" report.

Quick memo to SBC/SBTS: You will need to greatly expand your travel budget if you take on CJ.

When 20% of churches leave SGM and the difference is not made up, it is NOT church planting. It is church contraction. Do these guys use dictionaries? I do not know what they teach in seminaries, but I do know what they teach in business schools. This is not a story of success — it is a story of decline. If I owned stock in SGM, I would be screaming "Sell!"  I am sure that Piper and gang are aware of this fact, yet this crowd chooses to present a rosy picture. Why? This could be perceived as helping SGM cover up the difficulties.

By choosing to support CJ Mahaney, Piper is actively choosing to ignore victims and the hundreds of reports of problems.

The Bible clearly states that 2-3 witnesses should be brought forward to testify to sin. But maybe, in Piper's world, the worst sin is not being a complementarian or a Neo-Calvinist. Is that why he ignores the many, many cries of the SGM wounded?  When he chooses to prop up Mahaney (the "girls" at Girltalk are ever so grateful), he heaps coals on the heads of the victims. He cannot, and does not, have it both ways.

Not one word has come out of John PIper's mouth to bring comfort to the kids who were made to confront their pedophile and forgive them.  Apparently, Piper has not seen the need to reach out to hurting people. Instead, he does the tedious prop up of the usual suspects. Stop wasting your life, indeed!

Piper has hurt many, many people by his dog and pony show at SGM Louisville. He said wanted to go there. He"snatched" at the opportunity. Why no "snatching" to reach out to the victims. What did Jesus do?

By this maneuver, Piper has given observers an insight into his soul (and priorities). And it is cold inside. Only cold people could ignore the many, many reports coming out of SGM. I think I now understand how the "frozen chosen" moniker developed. Piper is the poster child.

Here is my prediction. When the lawsuit goes to trial, there will be the "march of the patriarchs" who will be called to testify to the character of CJ Mahaney and the rest of his cohorts. On that day, the ministry of Jesus will take a hit. The Pharisees will be back in business.

I believe that John Piper has a rigid agenda and that is to preach Neo-Calvinism and complementarianism at all costs. In so doing, he has let his theology trump his love.

Another bizarre example of Piper's view of gender. Die before you let her help you!

I have an example of another Piper moment in which he clearly shows his adherence to an agenda of strict complementarianism, even in the face of death or destruction. I saw this discussed on Rachel Held Evans' blog and found the link confirming his statement at Desiring God.

"Back in the seventies,…  my ideas on manhood were viewed as the social construct of a dying chauvinistic era. I had not yet been enlightened that competencies, not divine wiring, governed the roles we assume. Unfazed, I said no.

Suppose, I said, a couple of you students, Jason and Sarah, were walking to McDonald’s after dark. And suppose a man with a knife jumped out of the bushes and threatened you. And suppose Jason knows that Sarah has a black belt in karate and could probably disarm the assailant better than he could. Should he step back and tell her to do it? No. He should step in front of her and be ready to lay down his life to protect her, irrespective of competency. It is written on his soul. That is what manhood does.

And collectively that is what society does—unless the men have all been emasculated by the suicidal songs of egalitarian folly. God created man first in order to say that man bears a primary burden for protection, provision, and leadership."

Look very carefully at this example.  Who is missing in this discussion? The woman called "Sarah." She is merely a non-functioning body on the scene. The man is now in charge. He must lay down his life for her even if she may have a way to intervene so he doesn't die!  Sarah is forgotten in the incident. She may as well be a valuable statue to protect. Should she run, holler, take out her concealed weapon and take him out, apply a roundhouse kick to his face while Jason is being beat up, etc.? Nothing. In fact, Piper says something bizarre. Jason is told to not "tell her" to intervene. In other words, Sarah has no say in this situation. She must wait for directions before doing anything.

Here is an excellent comment from Rachel Held Evans' blog on this Piperism.

"If men are hardwired to protect women, then why was the MALE assailant in Piper's hypothetical attacking a woman? What do women need protection from in complementarian imaginings? Well, from men. The argument is therefore self-defeating.

If I was walking down the street with John Piper and a man jumped out with a knife, and John stepped between me and the man, after the man had attacked John, I'd be next. John's heroism may have given me an extra five seconds. Big deal. But if we both jumped the man with the knife together, we might actually stand a chance. (Assuming that running away wasn't an option.)

I'm a big believer in men and women leading in the home, the church and society together, without an ineffective, stifling gender hierarchy.

My husband is chronically ill and often can't do the things men are "supposed to do" in a relationship. This legalism would destroy our relationship if we tried to live by it. Instead, we embrace egalitarianism not just because it seems to us like the best approach to building a healthy relationship, but because otherwise we'd never be happy with each other or our condition. He shouldn't feel guilty that his health prevents him from doing the things John Piper thinks he should do, and I shouldn't feel disappointed that my relationship looks different from what the church always told me it should look like."

In the end, I do believe this is linked to a rigid form of theology on gender that invades everything Piper does. Last year we posted a blog about Ian and Larissa here. It is my opinion that Piper used this young couple to promote his unyielding agenda. Join me in praying that God might melt John Piper's heart which appears to be frozen solid.