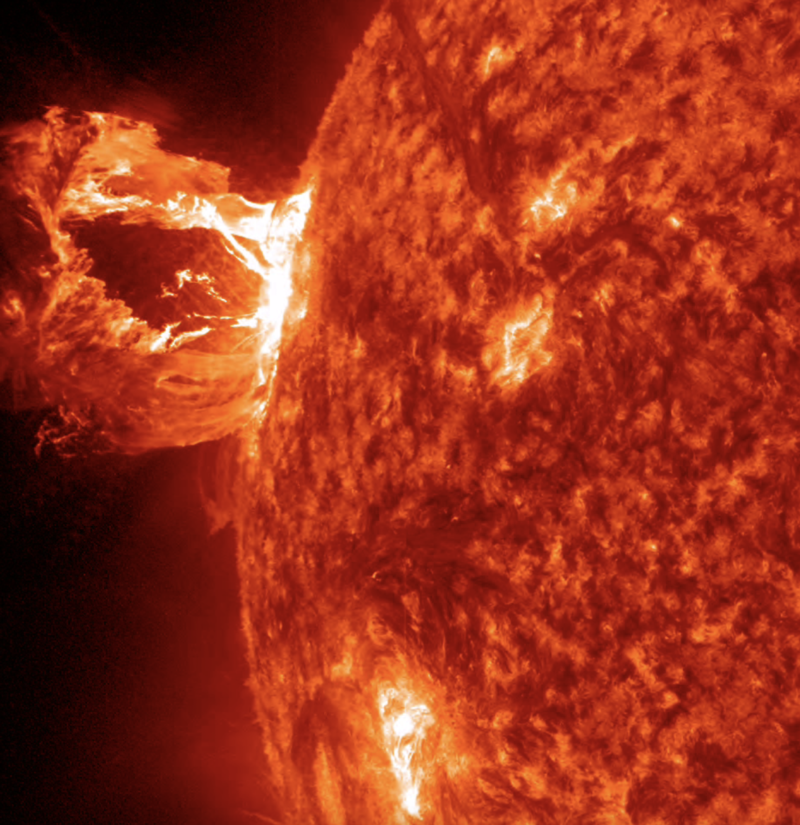 Beautiful prominence eruption shot off the east limb (left side) of the Sun. SDO/NASA

A politician who enters public life may as well face the fact that the best way of not being found out is not to do anything, which, if found out, will cause his ruin. Lord Hailsham

It is hard for me to describe how grateful I am for this decision. When I first started blogging, I received an anonymous email from someone who alleged that Paul Pressler had molested him when he was an underage teen. I asked him if he had made a police report. At the time, he claimed he had not. That worried me. I knew I would be up against a giant in the SBC who was a well-known attorney. At that time, I didn’t have the connections I have now. I suggested he make a police report and get back to me. I never heard from him again, but I often wondered about him. I have always felt guilty that I could not do more for him at that time.

Who is Paul Pressler?

Herman Paul Pressler, III (born June 4, 1930), is a retired justice of the Texas 14th Circuit Court of Appeals in his native Houston, Texas. Pressler was a key figure in the conservative resurgence of the Southern Baptist Convention, which he initiated in 1979.

Paul Pressler, along with Paige Patterson, is considered the mastermind of the “take no prisoners” conservative resurgence in the SBC.

However, he was dogged by controversy for years. Many people were aware that there were allegations of unwelcome sexual misconduct with underage and those who had reached their majority. In fact, Amy Smith and I believe that it is alleged that when people discussed the Pressler situation, they wouldn’t use his name. Instead, they would refer to having an “Eddie Struble situation.” Eddie Struble was a Baptist minister, Second Baptist Houston, who was accused of abuse. Amy Smith wrote about him in Southwestern Baptist Theological Seminary professor expresses concern that other kids are at risk for sexual abuse: Eddie Struble update.

Wikipedia goes on to state that Pressler had paid one victim $450,000 in 2004. Please note: Pressler was ousted from his job as youth pastor at Bethel Church. The church apparently did nothing about this issue. I bet, back then, the police were never involved. In fact, if many in the SBC had the power to do so today, police would never be involved.

In April 2018, the Houston Chronicle reported that Paul Pressler was accused by Toby Twining and Brooks Schott of sexual misconduct in separate court affidavits.[26] Both men said Pressler molested or solicited them for sex. The accusations were filed as part of a lawsuit filed in 2017 by Gareld Duane Rollins Jr. claiming he was regularly raped by the Conservative leader. Rollins met Pressler in high school and was part of a Bible study Pressler led. Rollins claims he was raped two to three times a month while at Pressler’s home.[27] According to the Chronicle, Pressler agreed in 2004 to pay $450,000 to Rollins for physical assault.[28] Southern Baptist leader Paige Patterson is also named in the suit, for helping Pressler cover up the abuse.[29]

In the 2018 Chronicle report, Toby Twining was a teenager in 1977 when Pressler grabbed his penis in a sauna at Houston’s River Oaks Country Club. Pressler was a youth pastor at Bethel Church in Houston but was ousted in 1978 after church officials received information about “an alleged incident.” Attorney Brooks Schott also stated in an affidavit that he resigned his position at Pressler’s former law firm after Pressler invited him to get into a hot tub with him naked. Brooks also accused Jared Woodfill, Pressler’s longtime law partner who from 2002 to 2014 was chairman of the Harris County Republican Party, of failing to prevent Pressler’s sexual advances toward him and others claiming his indiscretions were well-known at the firm.

Does this agreement make Pressleer look guilty? In my opinion, it does.

The one correction that needs to be made is that, according to Baptist News Global, Pressler agreed to pay Rollins $1500/month as long as the agreement remained confidential.

By college age, Rollins was a full-blown addict with habits financed by a life of petty crime. Pressler stayed in contact with Rollins while he was in prison and twice intervened with the parole board seeking his release. The second time Pressler offered Rollins a job as a personal assistant and invited him to come along for a religious pilgrimage overseas paid for by Pressler.

Later, after filing a civil claim for assault against Pressler, Rollins received a settlement in which Pressler agreed to pay Rollins $1,500 a month as “long as the confidentiality of this agreement is maintained.”

Paul Pressler was supposed to be Presidents George H.W. Bush’s appointment to head the Office of Government Ethics.

There is this cryptic note on Wikipedia:

In 1989, the first President Bush proposed to nominate Judge Pressler as the director of the Office of Government Ethics, but opposition from theologically liberal opponents in the Southern Baptist Convention persuaded Pressler not to pursue the appointment.

I have a different thought on the matter. I don’t believe that it was “theological liberals” who “convinced” Pressler not to pursue the appointment. The Washington Post reported on this incident in 1989: ‘ETHICS PROBLEMS’ DERAIL BUSH CHOICE TO HEAD OFFICE OF GOVERNMENT ETHICS”

A background investigation has found evidence of “ethics problems” involving President Bush’s choice to head the Office of Government Ethics and he now is out of the running for the post, senior officials said yesterday. Paul Pressler of Houston, a national leader of the fundamentalist movement within the Southern Baptist Convention and a Texas civil court judge, was the administration’s candidate to head the office. His name was sent to the Federal Bureau of Investigation in July for the routine background check on candidates in advance of formal nomination. Officials would not detail the FBI findings except to say they did not involve allegations of crimes or financial improprieties. A senior official said, “Information was uncovered that we felt was disqualifying.” Pressler could not be reached for comment,

Hmmm- no one was talking back then but I believe they found out information about the abuse allegations. In the meantime, the SBC, in the form of Paige Patterson, used Pressler’s help for the Conservative Resurgence. Patterson even memorialized Pressler in a stained glass window at the SWBTS chapel. Thankfully, these windows were removed after Patterson got the boot. You can see them in this post.

Why is this ruling so important for victims of abuse?

According to the Houston Chronicle’s Robert Downen:

“(The ruling) opens the door in Texas for people who were sexually abused as children to sue both attackers and institutions that mishandled or concealed the abuses years or decades later.”

I hope that others will now come forward to find justice