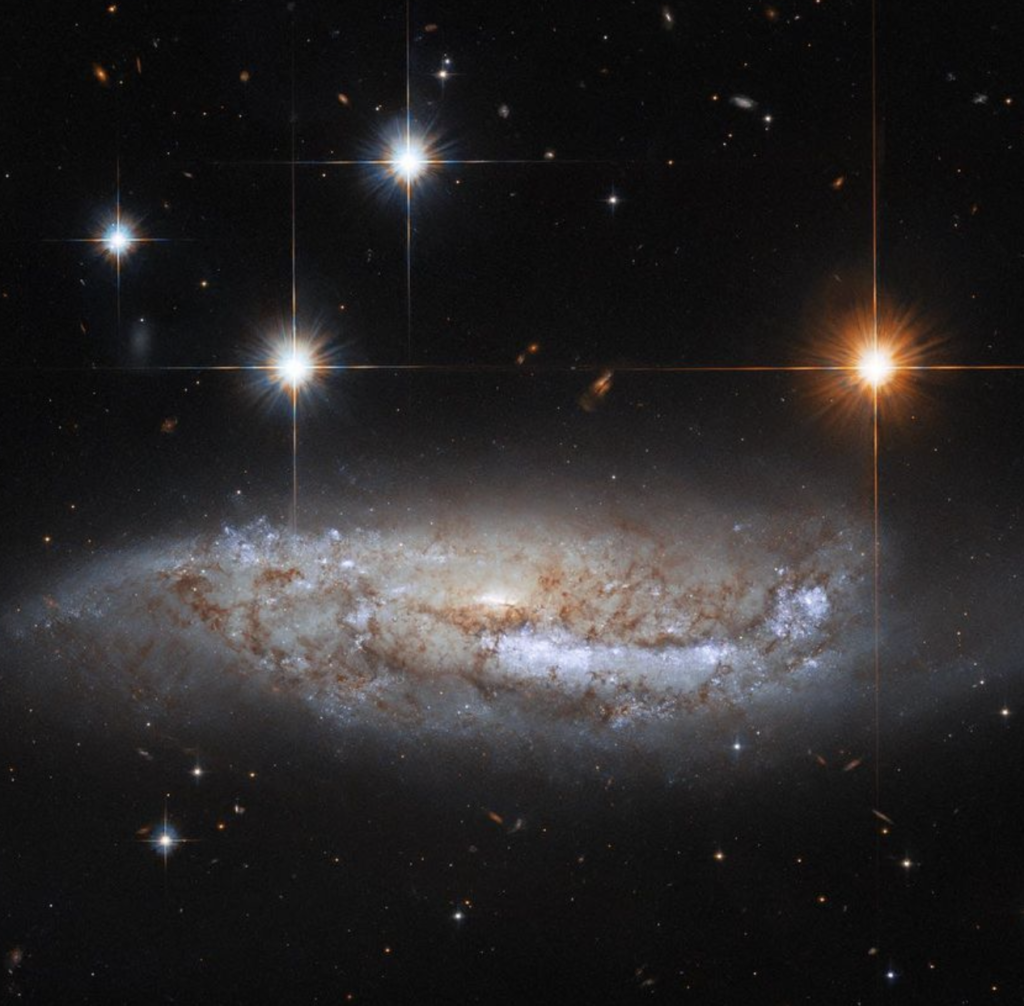 The @NASAHubble space telescope captured a side-on view of a barred spiral galaxy roughly 57 million light-years from the Milky Way in the constellation Centaurus. NASA

When someone shows you who they are, believe them the first time.- Maya Angelou

I will do a f/u for my last post later in the week.

Kudos to Holly Hayes and the Indy Star for investigating and making this sorry story public.

I often wonder why some Christian media do not put the name of some pastors in the title. I like to get it up front and personal. Olivetti is allegedly going to have an “ecclesiastical trial” by the Reformed Presbyterian Church of North America.

Here is what the Christian Post reported. Presbyterian pastor accused of covering up abuse of 15 kids placed on leave by denomination

“By imposing this requirement, the SJC in no way pre-judges the case, but acknowledges the gravity of the accusations against Mr. Olivetti,” said a letter sent by the commission, according to IndyStar.

Here is a link to the Reformed Presbyterian Church of North America (RPCNA). They claim they aim to:

The aim of everything we are and do is “to glorify God and enjoy Him fully.” Our beliefs all stem from a full commitment to the authority of the Bible as the inerrant, infallible Word of God.

So how’d they do? Not so great, apparently. 15 kids, and those that love them, are probably not OK, and their faith may be shakey. This will have lifelong implications. I wonder if Immanuel leadership and the RPCNA will provide them expert counseling throughout their lives? I wonder if lawsuits, well deserved, IMO, might be on the way?

I believe that Immanuel Reformed Presbyterian Church had unbiblical (maybe the word is bad?) leadership that protected the pastor instead of holding him accountable.

Olivetti and the 2020 elder board of the Immanuel Reformed Presbyterian Church were the subject of a December IndyStar investigation, which found they failed to act with urgency in responding to inappropriate behavior and sexual offenses by a boy at the church.

…The boy is a relative of Olivetti. Rather than immediately recuse himself, IndyStar found Olivetti took advantage of his position as a leader to interfere with the church’s response.

IndyStar is not indicating the relationship between Olivetti and the boy to avoid directly identifying him. The Star does not identify juvenile offenders unless they are charged as adults.

A good summation of the allegation by Holly Hayes of the Indy Star.

Holly Hayes of the Indy Star has been investigating this situation. In 12/22, she wrote 5 things to know about church child sex abuse scandal in West Lafayette

She noted these important points.

It is possible that 15 kids were molested by this “relative” of Olivetti.

Holly Hayes also reported in the Indy Star: ‘No sanctuary’: A boy sexually abused up to 15 kids. His pastor relative protected him. In this, we learn that Olivetti told another pastor outside of his church that he would not report it to his denominational leaders but would keep the information in a separate record.

…it was revealed to leaders at the West Lafayette church that children from multiple families had been abused and harassed by another minor within the congregation, according to internal church documents obtained by IndyStar. Olivetti and his fellow elders kept the abuse from church members for more than four months, even as they learned of additional transgressions.

…Rather than immediately recuse himself, IndyStar found Olivetti continued to shape the church’s response, taking advantage of his position as a leader to interfere with the investigation.

…In a July 2020 meeting, Olivetti told the pastor of a neighboring church he and his elder board – referred to as the session – were going to hide the allegations from higher authorities in the denomination. While session notes would typically be shared with the Presbytery each year, notes pertaining to these incidents, Olivetti said, would not be.

“We’re not sending a report up,” Olivetti said during the conversation, an audio recording of which was obtained by IndyStar. “It’s not going to be in our regular session minutes. It’s going to be in a different (record).”

One deacon had the good sense to resign when he learned that the leaders’ goal was to present Olivetti as the one being harmed by this investigation!

One former deacon, Joshua Bright, resigned from the church on 12/20. He told the Indy Star:

Joshua Bright, a former deacon who resigned and left the church last December, told IndyStar the Immanuel session’s actions have skewed perceptions of the harm done.

“Probably the biggest impact is spinning out a narrative that portrays (Olivetti) as a person who has been harmed and abused by what’s gone on in the church,” Bright said, “as opposed to (being) the person who has caused it.”

The church should can their entire leadership team and ask this man to return. He at least knew that things were wrong.

Eloquence and charism do not mean a pastor is a good or decent man.

One parent of a victim spoke to the Indy Star that he attended the church due to the charisma and eloquence of Olivetti.

“The thought of my children growing up under a lesser preacher,” he wrote in late summer 2021, “was unthinkable.” He continued: “That eloquence and charisma has brought a great deal of suffering back on me and others.”

Olivetti is going on trial by his denomination. This should be interesting.

The religious charges against Olivetti were accepted by the commission late last year, but the decision to place him on leave wasn’t announced until Thursday. As of Jan. 2, Olivetti was still preaching at Immanuel.

…Olivetti’s leave was announced to the denomination Thursday afternoon in a letter from the Synod Judicial Commission, a copy of which was obtained by IndyStar. The Synod, which is the national governing body in the Reformed Presbyterian denomination, is currently overseeing the investigation into Olivetti and his fellow elders.

…In accordance with the denomination’s Book of Discipline, Olivetti is required to “refrain from the exercise of office of teaching elder until the judicial process is complete,” the commission announced Thursday.

“By imposing this requirement,” the letter says, “the SJC in no way pre-judges the case, but acknowledges the gravity of the accusations against Mr. Olivetti.”

I’ll leave you with this. It’s Olivetti telling a pastor of another church that the information was not going to be sent up the chain of leadership. I am no fan of biblical counseling, but this guy did the right thing by releasing the recording. (Again from the Indy Star.)

Joshua Greiner, a pastor at Faith Church West who that spring was providing biblical counseling to one of the Immanuel victim families, first learned of Olivetti’s connection to the perpetrator in late July 2020, around the time he began to encourage the family to return to their home church for ongoing care.

Following that disclosure by the family, he was counseling, Greiner and Olivetti met to discuss how to move forward.

IndyStar has obtained and reviewed Greiner’s recording of their nearly 90-minute conversation. It was during that meeting that Olivetti said the Presbytery wouldn’t immediately intervene, that only some session members were fully aware of the situation, and they would be keeping off-book notes regarding the investigation.

This makes me so darn angry. Please join me in praying for the girls and their families. I am so saddened by this. Another church pastor hurts children by allegedly covering up, and another church leadership helped him do so (allegedly.) Another group of kids was harmed, and that is not alleged.

See if you would trust this “charismatic and eloquent” Pastor Olivetti…Here is a link to 109 synonyms for scumbag.