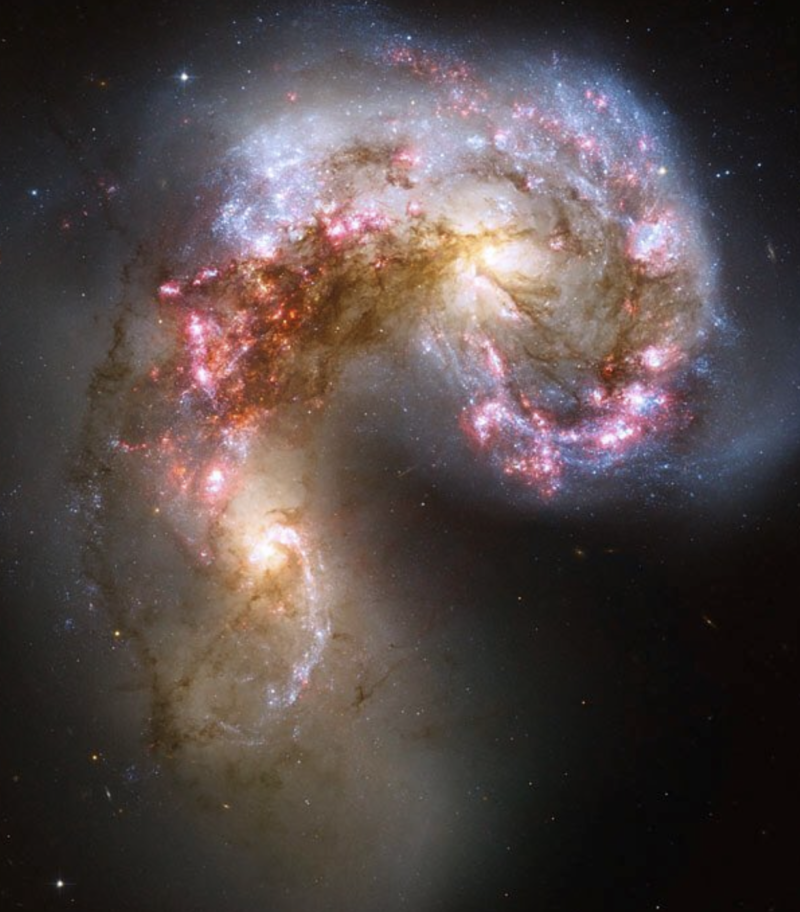 These “celestial fireworks” are actually the Antennae Galaxies. NASA

“A friend is someone who knows all about you and still loves you.” ― Elbert Hubbard

The NYT posted: First They Fought About Masks. Then Over the Soul of the City. Subtitle In Enid, Okla., pandemic politics prompted a fundamental question: What does it mean to be an American? Whose version of the country will prevail?

If you read the story in its entirety, you will learn about Wade.

A prominent supporter of the recall effort was Ms. Crabtree’s pastor, Wade Burleson, whose church, Emmanuel Enid, is the largest in town. Enid has a substantial upper middle class, with large homes and a gated community near a country club and a golf course, and many of those families are part of the church’s 3,000-strong congregation.

Mr. Burleson, 59, served two terms as president of the Southern Baptists of Oklahoma, the largest evangelical denomination in the state. He was considered a moderate in the Southern Baptist tradition, calling for greater leadership roles for women and speaking out for victims of sexual abuse, including asking church leaders to create a database to track predators, an unpopular stance.

But in the early months of the pandemic, he started speaking against mask mandates. He promoted the work of Dr. Vladimir Zelenko, a Ukrainian-born doctor turned right-wing media star, who claimed to have a novel treatment for the coronavirus. Mr. Burleson used apocalyptic language, invoking Nazi doctors as a specter of where mask and vaccine mandates could end up. Mandates, he argues, are the first steps toward complete government control, and he feels called to warn people.

Here is where I want to stop and explain my friendship with Wade. First, it should be noted that I have been a strong advocate of the vaccine and boosters, taking an early stand on the matter. I have always followed the mask mandates for the area that I am in at any one time. I have also strongly opposed the efforts of anti-vaxxers and my writing will show that.

Shortly after I started blogging, I became concerned about the vehemence of the Mark Driscoll bros, receiving emails that were pretty disgusting. I was shocked at what I learned about Sovereign Grace and CJ Mahaney. As I spoke out, I received threats and derogatory comments from The Gospel Coalition Bros like Joe Carter who accused me of libel. Although a friend was helping to write during that time, the weight of the blog fell on my shoulders.

There was a time when I began to feel that I might quit blogging, especially as I discovered more and more stories of churches and sexual abuse, especially in the SBC. I also began to realize that women were not held in high esteem by many of the complementarian folks. I began to call the hard-core Calvinists “Calvinistas” since it seemed their beliefs were weaponized against all who might disagree with their obviously superior stance on the faith. I felt alone and discouraged.

Then I got a call from Wade Burleson who asked me to come out to Enid to spend the weekend with Rachelle and him. They encouraged me and we found common ground on the sex abuse issue as well as the role of women in the church. Without them, I may have left blogging behind.

Wade is not an authoritarian. He does not demand that his friends follow him in lockstep. He tips towards Calvinism; I do not. He is open to young-earth creationism; I am a theistic evolutionist. He loves the SBC. He knows I am now Lutheran. He was supportive of me as I wandered in the post-evangelical wilderness, looking for a church home. He was the only pastor who came to the dessert for the women of the For Such a Time as This rally. The only one… He called women on his staff “pastors” which probably caused the SBC to look the other way.

It was due to the support of Wade and (Dr.) Rachelle that I continued to blog. Wade will always be my friend, even when we disagree. I am saddened by those who claim I must drop a friend because he disagrees with me. That isn’t going to happen.

In the meantime,  I have decided to feature talks and sermons by a number of Christian pastors, leaders, and teachers in EChurch@Wartburg. There is a lot out there and I think it will be fun and challenging.

So what did they forget? What do you think the most dramatic story is of 2021?