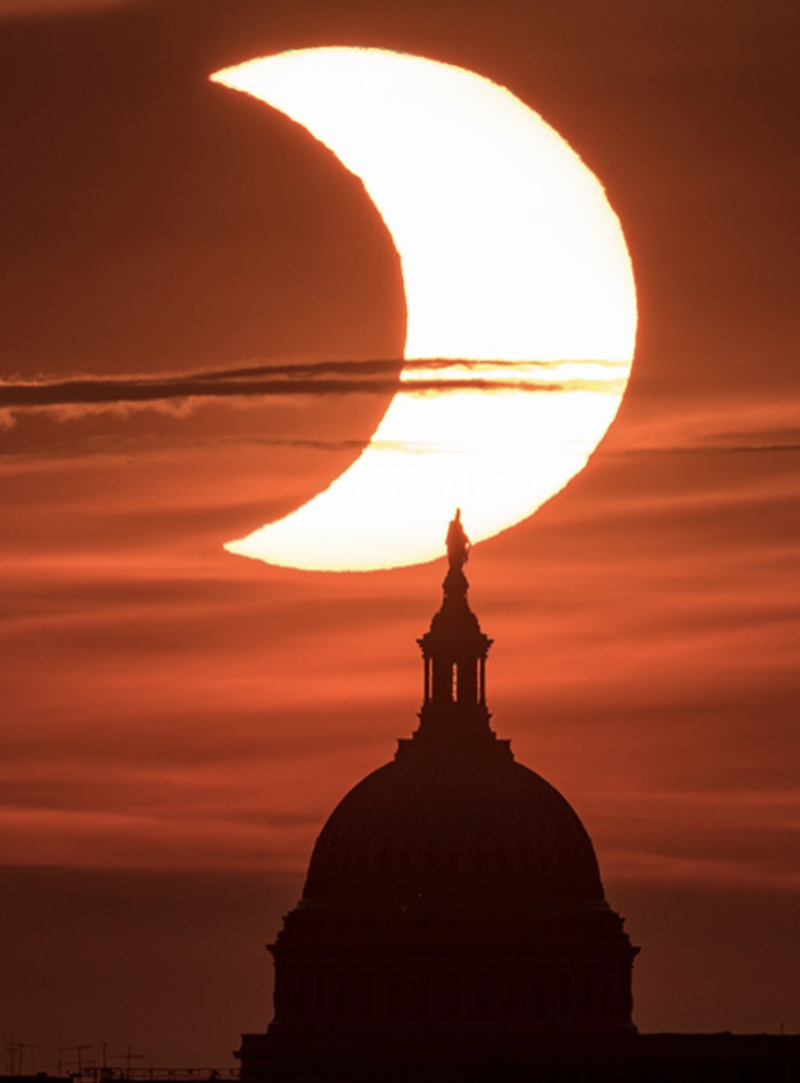 partial solar eclipse as the Sun peeks behind the United States Capitol Building and from the Delaware Breakwater Lighthouse, on June 10, 2021. NASA

“Goodness is about character – integrity, honesty, kindness, generosity, moral courage, and the like. More than anything else, it is about how we treat other people.” Dennis Prager

Christmas week! This is a busy one for me. My family is coming for the holidays. My son has been exposed to Covid from a close friend who was vaccinated. My mother is still in rehab and I am breaking her out any day. My dishwasher sprang a leak all over our floor and will need a major part (under warranty) but the part is not readily available due to “supply chain issues. So, no dishwasher for the holiday.

I have my new pug, Holly Berry, who is a sweet dog but very underweight. The first full day here, she crawled up my chest to give me a slurpy lick. She is keeping me focused on the meaning of Christmas. Just like Holly, we all like sheep have gone astray. Our Savior reached out and saved us as well.

Schedule for the week…Two short posts with interesting information on Monday and Wednesday. A repeat post on my reflection on Christmas on Friday. E church will be posted on Sunday.

I love you all and am humbled you would take your precious time to comment here. Merry Christmas!

I plan several posts around this topic so hang in there.

John Piper is still the “man” at Bethlehem College and Seminary

Let’s get this dealt with upfront. I know there are some who claim that John Piper really has nothing to do with Bethlehem Baptist Church since he retired from the pastorate. However, he still lingers on as founder and teacher of desiringGod.org and chancellor of Bethlehem College & Seminary.

John Piper is founder and teacher of desiringGod.org and chancellor of Bethlehem College & Seminary. For over 30 years, he served as senior pastor at Bethlehem Baptist Church, Minneapolis, Minnesota

It is my understanding that some of the school is housed in the church. His DNA is all over this church, college, seminary, and website. To say otherwise is silly. I have written post after post regarding Piper’s seemingly bizarre prognostication. Here are a few.

There’s more but I’ve had enough and I suspect that you have as well.

The ongoing mess at Bethlehem Church

There is an ongoing mess at Bethlehem Church and Seminary. I’ve written one post regarding the problems. The Day God Didn’t Kiss Bethlehem Baptist Church. 4 Pastors Have Resigned, Including the Lead Pastor, and There’s Even More. However, more and more information is becoming available.

Yes, but not in the way Kenny means.

Julie Roys wrote about it. Bethlehem Baptist Church Pastor Accuses The Roys Report of ‘Threatening’ Him: Our Response As most readers know, I have a rule. Play in the public eye; pay in the public eye. John Piper and the church burst onto the public scene. Piper brags about the number of his published books and his website which he wants as many people as possible to access. I don’t care what he did with his money. I do care that he has influenced an entire generation of authority-driven young men who seem to have little use for women in their ministries. Piper and lower-level pastors loved the attention of the masses so long as it was praising them. They don’t get to ignore the critique which is warranted under the circumstances.

Kenny Stokes, who is the next big cheese at Bethlehem Church, got all bent out of shape because Julie Roys contacted him, saying she was writing a story about all of the goings-on at the church. Roys committed the ultimate sin in Piper’s eyes. I have no doubt that Kenny Stokes felt his authority was being threatened.

Under pressure for elders’ alleged abuse of power, Bethlehem Baptist Church (BBC) elder and recently-appointed Pastor for Preaching and Vision Downtown Kenny Stokes accused The Roys Report of “threatening” him.

Now we get to see how the boys respond when a strong woman presses them for an answer. You can hear a recording on her site. He said:

And she contacted me and others and threatened me—you know, ‘Talk to me, or I’m going to say you’re a flip flopper.’ And I decided right there. I’m not talking to her. And I mentioned it to one of the reputable reporters. And she said, ‘She gives us a bad name.’

You will get to know another authority-driven male in this story, Andy Naselli, a BBC elder, and Bethlehem College and Seminary professor. Naselli has been accused of having an abusive personality with the students at the seminary. Why am I not surprised by this? No one, but no one, disagrees with the big cheeses who have the blessings, of Pope Piper himself. I will be discussing this in the next post.

So, Roys investigated these charges. Was she rude, tearing the authority away from these gospelly, thin-skinned men? Here is what she said she sent to Stokes.

I’m working on an article concerning recent events at BBC. I would like to speak with you about those. Specifically, it’s my understanding that you called for an internal investigation into allegations concerning Andy Naselli at a March 11 meeting with Downtown elders. However, you later voted to dismiss the allegations without an investigation. Would you be willing to explain that apparent about-face to me?

Stokes did not respond to two emails. However, when Roys heard about the “threatening” charges, Stokes appears horribly upset and starts using words like “defamatory” which means that if he could sue her. He would but he can’t because she wasn’t. So he attacks her personally, at least in my eye.

In an email the same day, Stokes apologized for his “flippancy” and “inaccuracy” when he alleged I had called him a “flip-flopper”—a term I never used. But he appeared to double-down on his accusation that I had threatened him (Stokes’ full email and our entire thread is published at the end of this article.):

You said that I had done an ‘apparent about face’, first calling for ‘an internal investigation’ and then voting to ‘dismiss the allegations without an investigation.’ At that time, with the threat of your publication pending, and your inaccurate presentation of my own thoughts and intentions and actions as ‘an about face’, I felt that you were putting pressure on me to talk to you. Given that pressure, and your defamatory portrayal, I felt I had no reason to trust you to accurately portray my perspective. To the contrary, we did speak to the reporters from CT, World and our own local StarTribune in part because they approached us without pressure and without a predetermined narrative.

Here is part of that note which Julie posted in its entirety. I want you to pay close attention to his sign-off.

For the glory of Christ and the joy of all peoples.

Yep, Kenny, as one of the “all peoples,” I got no joy from his response.

Julie Roys denies threatening Stokes. My feeling is that the only thing that got threatened is Stokes’ feeling of authority. Bless his heart.

Stokes claimed that Roys has no accountability.

We decided we would talk to reputable reporters who have, who are at organizations that have editorial boards, people who are accountable. And um, we did not see Julie Roys as that.

Julie took that complaint seriously and described the accountability that she has with her editorial board. However, I believe that Stokes played her. He had absolutely no intention of replying to her and used this opportunity to denigrate an uppity woman. Do I need to write about all the ministries that had “accountability” and garbage happened anyway? Oooh- I’ve got a good one involving Bethlehem Baptist Church. Piper and friends were (and are?) quite supportive of CJ Mahaney who supposedly had “accountability.”

So here’s the question open for debate. Does accountability ensure godly behavior? Full disclosure: TWW does not have an editorial or accountability board. Does being “in the public eye” function as a means of accountability?

Kenny Stokes, who brings me no joy, is one reason why I will ever attend Bethlehem Baptist Church