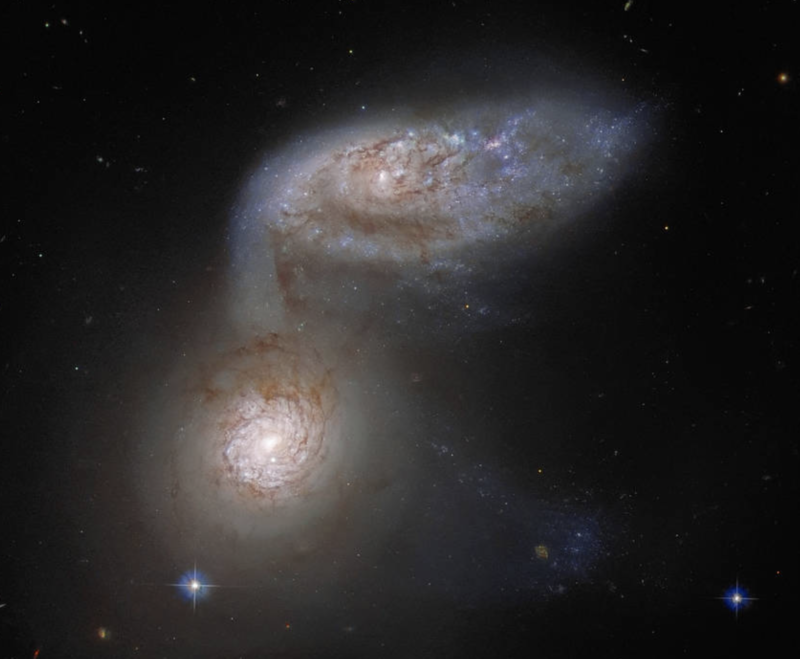 A Dangerous Dance: This NASA/ESA Hubble Space Telescope image features two interacting galaxies that are so intertwined, they have a collective name – Arp 91. NASA/Hubble

“I was a disembodied, wandering viewpoint.” — Olaf Stapledon

I hate it when I waste my time reading the nonsense that some women post who are writing for groups like The Gospel Coalition or Desiring God. It is obvious that such women have husbands who have received their education at Southern Seminary, and are now pastors of Baptist churches which push “biblical counseling.” Such women push nonsense that women who are not “one of us” are doing nothing to help their disembodied souls by their internet presence.

This tweet from Desiring God made the rounds a couple of weeks ago. At first, I thought it was a joke. Truly. I couldn’t believe that anyone would write such an ill-conceived tweet as this one. 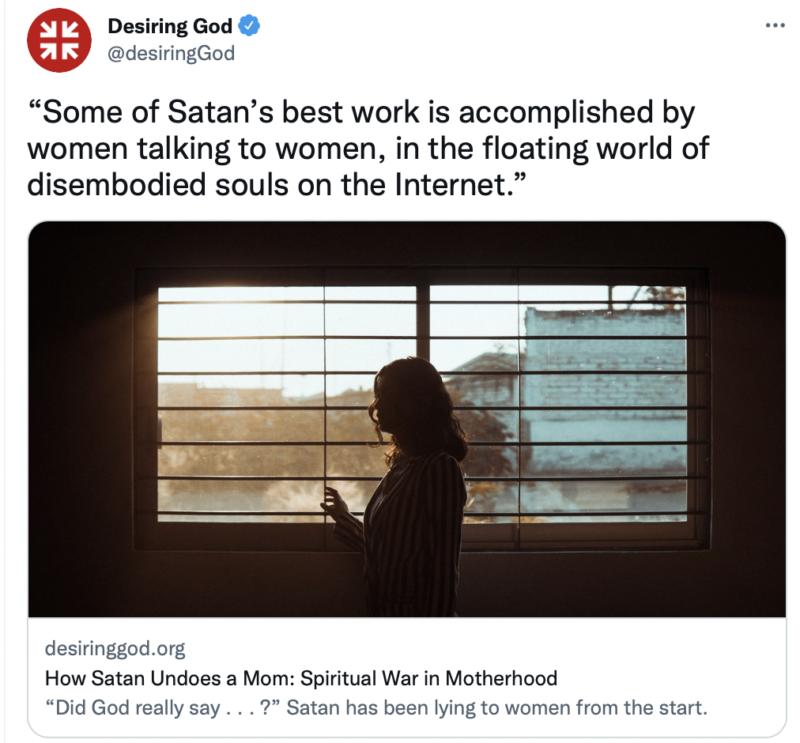 It was so stupid that I thought it must have been written by John Piper. Imagine my surprise when I discovered that it was written by a woman, Tilly Dillehay, writing for Desiring God. Here is a link to her post entitled How Satan Undoes a Mom: Spiritual War in Motherhood. I have read other posts by Tilly but found they were filled with the typical ultra-hard complementarian stuff that attracts The Gospel Coalition and Desiring God. Where have I heard Tilly’s name before?

Tilly Dillehay and using the rod on little children.

In this post, I quoted extensively from her deeply concerning post which was featured by The Gospel Coalition in 2020. How the Rod Can Point Children to God. Here are some quotes from that post.

…But what I want to argue for here is a simple and fairly uncontroversial statement: the Proverbs commend the use of the rod. They assume that the principle of the rod is an essential part of loving our kids.

…Finding out how to communicate that authority without the physical rod will require great wisdom. It’s another reason why we need to be willing to humbly ask for input from experienced parents who’ve walked a similar road. And for the parents whose children don’t fit into these narrow exceptional cases, exceptions shouldn’t be used as an excuse to ignore Scripture’s call.

…(I wrote) Tilly goes on and on about out-of-control children and teens. She mentions one boy who said to his parent, “Shut up and drive.” She then came to the conclusion that the only way to prevent such absurd behavior is to use the rod because the Bible obviously says so.

Here is where it gets dangerous. The rod can be used on babies.

…I wrote: Tilly obviously has no trouble with someone who recommends using the rod to punish a baby. She got downright excited that Ted Tripp has a *full chapter on the use of the rod.*

…She wrote: And Tedd Tripp has a full chapter on the rod in Shepherding a Child’s Heart.

…I wrote this: So I must assume that she believes in using the rod on an eight-month-old baby!

In that post, I also noted that the biblical counseling group, ACBC, recommends Ted Tripp’s book as well.  Her husband is a pastor at this church, Grace Baptist Church of Hartsville, TN, which is a proud supporter of ACBC.

So what did Tilly do now? Dee, once again, is a victim of Stan.

Tilly’s tweet spread through the Twitterverse right quickly. Needless to say, it was roundly laughed at and censured. Let’s look at the quote on its own.

Some of Satan’s best work is accomplished by women talking to women, in the floating world of disembodied souls on the internet.

Tilly, living in the middle woods of Tennessee, is obviously well protected from icky topics like sex abuse in the church. Surely, if she were not so isolated, she would be aware of what many women who talk to women on the internet have done to expose and fight sexual abuse in the wider church.  Except, you see, Tilly is making use of the internet to send her disembodied podcasts onto the web to speak to women about such important subjects things as marital submission and hobbies in the home on Home Fires. She also blogs with her husband, Justin, at While We Wait. Apparently, since she is fearful that Satan might come and get her, I assume that she never, ever speaks to anyone on the internet unless she can see them in their full-bodied state. Except, she does allow one to leave a comment which appears not to be a hot commodity over there.

In fact, it seems like Tilly is out there drumming up business for her site more than I am. Podcasts, interviews, blog posts, etc. Let’s look at some of her thinking in the Desiring God post.

Satan’s warfare on woman and her seed is not a side project. It is a major part of his strategy. To Satan, mothers represent the unrelenting multiplication of hated human images of the hated God-man who is coming soon to end his evil reign. Mothers are stewards of the home, superintendents of the precious time called childhood, where Satan hopes to do his worst work — and often sees worse defeat.

Except, Satan does not target moms anymore so than other humans in other occupations. I took a look at the internet. Here are more groups that some think Satan targets.

Ok, that’s enough wasting my time. It boils down to this. Everyone on this planet is a target for Satan. Satan is known as the accuser and it is something that all of us as Christians struggle with from time to time. However, it seems to me that Tilly is a bit insecure with her role as a mother. It appears that this is an easy way to build up her security as a mother by claiming that Satan is especially targeting her. “I’m really important because Satan is targeting me.” Let’s look at what she said one more time.

Some of Satan’s best work is accomplished by women talking to women, in the floating world of disembodied souls on the Internet. So every Christian woman who would grow in wisdom actively pursues sound doctrine (Titus 2:1), letting the word of Christ dwell in her richly (Colossians 3:16), regularly meditating on what is true, honorable, just, pure, lovely, and commendable (Philippians 4:8).

I have used my disembodied time on the Internet routing out sexual, physical, emotional, and spiritual abuse on the internet. In so doing, I have become friends with those who are doing similar disembodied work. Without us Ravi Zacarias would have died as a great leader, Bill Hybels would still be leading Willow Creek, and James MacDonald would still be in charge at Harvest, Jules Woodson’s abuser, Andy Savage, would still be leading a megachurch. Southern Seminary’s president, Al Mohler, would still be best buddies with CJ Mahaney and friends.

I almost forgot about the non-disembodied accusations of abuse at John Piper’s Bethlehem Seminary and Church. Desiring God, who published this post, is linked to all of that as well. It seems like Satan has done a pretty good job targetting all of that.)

If anyone wants to see the effects of Satan’s work, spend some time getting to know the victims of Sovereign Grace Ministries, now known as Sovereign Grace Churches. (Those SGC people get really bent out of shape when I call them SGM. It’s a pain to write the whole thing out but I want them to feel “comfortable….”)

So, back to my embodied state since I have to make dinner. However, never forget that the Daughters of Stan (sic) and the men’s auxiliary. Sons of Stan, are doing great work on the internet. Maybe Tilly could drop by, in her disembodied state, and see what God is doing.