“The infallible rule of interpretation of Scripture is the Scripture itself: and therefore, when there is a question about the true and full sense of any Scripture (which is not manifold, but one), it must be searched and known by other places that speak more clearly.”
The Westminster Confession of Faith, I.IX

“I suppose it is tempting, if the only tool you have is a hammer, to treat everything as if it were a nail.”
Abraham Maslow, “The Psychology of Science: A Reconnaissance”

Jonathan Leeman is the editorial director for 9Marks. He is highly educated, has written several books, is an adjunct professor at several seminaries, and the BFF of Mark Dever. He recently blocked me from his Twitter account, likely because of my response to his Tweet below.

As most of you likely know, there are work-arounds that enable you to continue to view the Tweets of those who have blocked you.

I like to keep an eye on Jon Leeman because he is a big-shot in the 9Marx para-church group. I believe that future generations of Christians will view 9Marx in the same negative light as they now view the Shepherding Movement, popular in the 1970-1980s. Both movements have, in my opinion, caused great harm to many disciples of Christ.

Yesterday I came across a few Tweets published by Jon Leeman. Since I can no longer reply directly to his Tweets, I thought they were important enough to bring to the attention of those outside of the 9Marx echo chamber.

First, let me say that of the 9 marks of a healthy church Mark Dever has chosen to put into a book, only two receive prominence. Those two are church membership and church discipline. Not many could name the other seven because they don’t get near the attention from Dever and Leeman.

The other item that receives a fair amount of attention among the 9Marxists is their odd take on baptism. I have written a few articles about it, the latest can be found here. With few exceptions they don’t believe anyone should be baptized until they reach the age of legal adulthood and are living on their own, having had time to prove the validity of their rebirth. Adults should also be closely monitored to ensure they are authentic Christians prior to baptizing them. Spontaneous baptisms, such as found throughout the book of Acts, are frowned upon.

I guess if any individual can rightly judge the heart of man, Mark Dever and his disciples should be the guys who could do so.

But not so fast.

Dever has had a few well known failures on his judgment of a man’s heart. Most notably would be Anthony Moore. Moore was a graduate of Dever’s 6-month internship program and was being pushed to prominence in the 9Marx conference world. Moore was also the lead pastor of the Fort Worth Campus of Matt Chandler’s Village Church.  Moore was fired from that job when his assistant pastor revealed to Village Church leadership that Moore had filmed him numerous times in the shower at Moore’s residence. Moore was then hired by his BFF, Thomas White to work at Cedarville University. Eventually, Moore’s past was revealed and White also had to fire Moore to save his own bacon. It was revealed that while attending Dever’s intern class, Moore – a married man, had written at least one email expressing his feelings to the guy he later voyeuristically filmed in his shower! 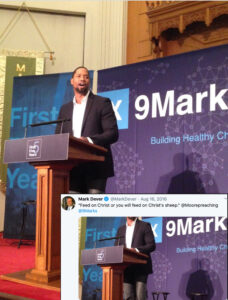 One would think if Dever had failed so terribly in his judgment of the heart of Anthony Moore, a man who had spent many hours with while Moore was an intern at his church, he might want to reconsider his baptism policy. You would be wrong.

Now on to the Tweets I saw yesterday.

I admit I got a laugh out of this response to my Tweet:

I guess Jon Leeman has a study guide coming to market soon (a common and effective ploy by Christian publishers to increase revenue) for the book he and Collin Hansen authored titled, “Rediscover Church.”

Ah, now that is a good question. I don’t know if this questioner is referring to Baptist Churches, but she very well may be. After all, there are literally hundreds of Baptist churches where abusive and wicked pastors abused children and they were never disciplined. Many shuffled off to other Baptist churches and nothing was even said!

I think we should let Mark Dever answer this one. Perhaps he can start by answering why he allowed CJ Mahaney to flee church discipline at Covenant Life Church and attend Capitol Hill Baptist prior to taking his dog and pony show to Louisville to “plant a church.” Maybe at the same time Dever could answer us why he co-signed a statement with Ligon Duncan and Al Mohler supporting their friend, CJ Mahaney in the midst of the sexual abuse of children scandal within the Sovereign Grace denomination. (A statement Dever and Duncan have never retracted.)

It seems to me that the churches where pastors stress church discipline the most never get around to applying it to themselves. I think it would be very unloving (and unwise) to encourage someone to attend such a church, much less sign a membership contract!