“You are not the darkness you endured. You are the light that refused to surrender.” ― John Mark Green

What is meant by a third-party, independent investigation?

Maybe I’m a bit naive. I was first introduced to the idea of a third-party, independent investigation shortly after Boz Tchividjian founded GRACE in 2004. After watching a former church perform a non-independent, really friendly with the pastors, kind of investigation, I knew something was terribly wrong. I had been a member of this church in which the head pastor told me that his elders had disagreed with him only two times in 28 years. So why was an elder helping with the investigation since they almost always agreed with the church leadership? I had little hope that a non-influential member’s report would be taken seriously. I believe that I was right. Such an investigation was a slam dunk for the pastors. I knew that there had to be something far better than what I experienced.

What does the term “third-party” mean? According to the Legal Dictionary:

A generic legal term for any individual who does not have a direct connection with a legal transaction but who might be affected by it.

What does the term *independent” mean? The Legal Dictionary states:

2. Free from the influence, guidance, or control of another or others; self-reliant: an independent mind.
3. Not determined or influenced by someone or something else; not contingent: a decision independent of the outcomeof the study.

So, continuing to use my former church as an example, the investigation team was made up of 4 folks, 3 of whom were members of the church. The 4th seemed not to be involved but let’s ignore that for the moment. They were heavily influenced by their pastors in the church which is to be expected. However, such a relationship should not be expected of those who are attempting an honest investigation.

I started a blog, attempting to understand the rules of the game of *how does one get a truly honest* church investigation. As all of us know, it must happen with groups whose investigators are not members of that particular church or parachurch organization. Through the past years, I have respected GRACE for its independent investigations.

Who are the ones who have been forgotten in the past?

Internal investigations often forget about the least of these. They live to protect the powerful and wealthy. The victim is usually powerless and is also dealing with the pain and suffering which has been afflicted upon them by the abuser and by the powerful church leaders who want to cover up the problem. Many would say it was to *protect the church.* But, in my opinion, it was usually to protect the leaders who have messed up.

On GRACE’s page, they describe their mission as:

The Heart of God for Children and the Vulnerable

That organization also says this about their values:

Jesus repeatedly spoke up on behalf of the weak, marginalized, and wounded.

In other words, they lookout for the little guys in these investigations while seeking the truth.

I was encouraged when Rachel Denhollader endorsed this group to look into the Lorrits situation. However, when Lorrits was totally exonerated by the process, I was concerned. I had written about Lorrits in 2016. I was shocked when Greear hired him to be a pastor at The Summit. I couldn’t understand how this could have happened. Why did Guideposts exonerate The Summit and Loritts?

Julie Roys wrote a post that may answer my question. Red Flags Surface About Firm Hired to Investigate SBC’s Handling of Abuse. As usual, Roys has facts and questions as does Wade Mullen.

The Southern Baptist Convention (SBC) is taking bold new steps to address its alleged mishandling of abuse, and yesterday voted to set up a task force to deal with the issue. At the same time, a leading abuse advocate is raising serious concerns about the firm the SBC Executive Committee has hired to investigate abuse issues—Guidepost Solutions.

In a series of recent tweets, author and seminary professor, Wade Mullen revealed several instances where Guidepost Solutions has not represented the best interests of victims, but instead has protected powerful clients. And as Mullen warned, if an investigation isn’t conducted properly, the result can be worse than the initial situation.

Is Guideposts really an organization that seeks to protect their clients who pay their not insignificant charges?

Let’s take a look at some of the concerns that Wade Mullenriased on Twitter. 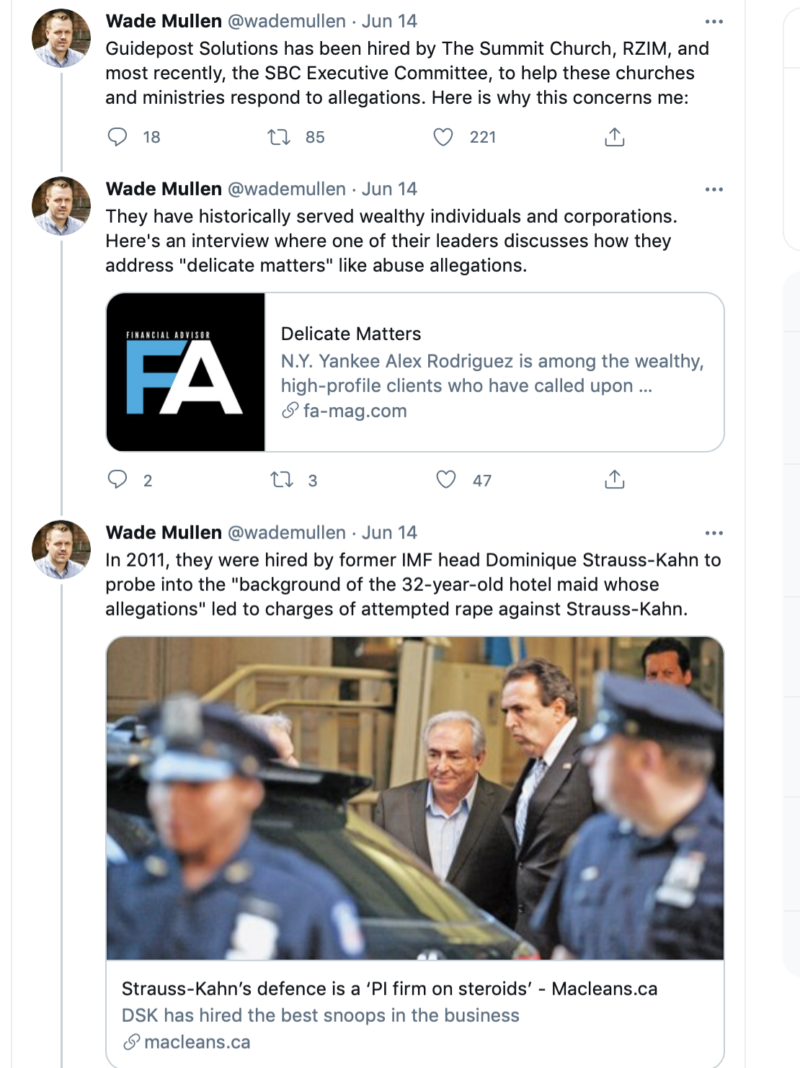 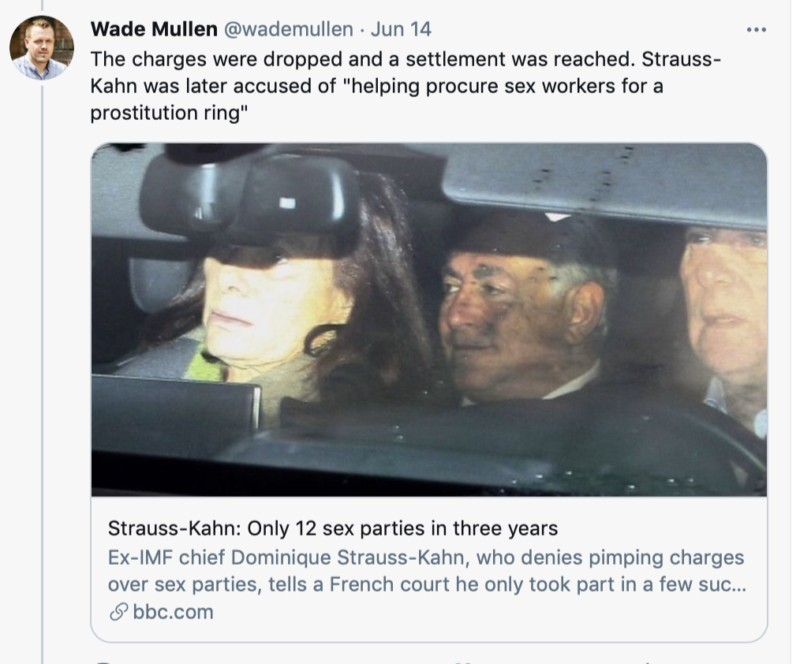 Dee is somewhat dumbfounded! I followed the Strauss-Kahn case and was disturbed that he was not convicted of molesting the housemaid of the hotel. I had no idea that the above investigations were run by a group that would be called in to do independent, third-party investigations in the SBC or The Summit.

Delicate Matters is their thing!

Prince: What services does your company provide for the wealthy?

We work on a lot of different concerns. For example, a serious trend we’re seeing are cases involving extortionate threats and demands against high-profile and high-net-worth executives, celebrities, athletes, entertainers and politicians. Basically, these people are money targets. Each of these cases is very sensitive and complex in nature, requiring the utmost in precision and discretion.

…Prince: Can you go into a little more detail?
O’Connell: Often, we’re hired by the attorneys or other advisors of those being extorted with matters ranging from inappropriate relationships to allegations of abuse to undesirable photos held as ransom. When we meet with these clients, they’re already in crisis mode and they just want their problem to go away.

We troubleshoot the issue and provide the best options based on the evidence we gather and the information revealed during our investigations. Because we’re former federal and state prosecutors and law enforcement officials, we have vast domestic and international resources. We know if and when to get law enforcement involved.

It’s lawful and ethical to purchase documents, photographs and recordings, and oftentimes clients don’t want to involve law enforcement. They just want the problem to go away. We’re very good at making the problems go away with the least amount of repercussions for the client.

Wait a minute….this is who is investigating sex abuse allegations in the SBC? Is the SBC one of its wealthy clients? Was The Summit Church one of their wealthy clients? This is the group that investigated ARod’s indiscretions as well? Harvey Weinstein has been associated with them. them?

Then again, there is that *birds of a feather *quote. What in the world is going on?

Here is what Julie Roys had to say.

In addition, a victim of Loritts’ brother-in-law and Greg Selby, a former insider at Fellowship Memphis, told Guidepost that Loritts and other pastors engaged in a cover-up.

Yet in its report, Guidepost Solutions effectively exonerated Loritts, stating, “Through our interviews, reviews of documents and reviews of communications, we found no convincing evidence that Loritts was involved in a cover up.”

Julie talked with those who said that this exoneration was a foregone conclusion.

When Guidepost’s report published, Selby told The Roys Report that he believed Guidepost found only what they were looking for.

They had a very narrow scope of what they were interested in,” Selby said of the investigators he spoke with. “I don’t think they were trying.”

There was no mention of the infamous cell phone which had pictures on it which *disappeared.” Lorrits just doesn’t know what happened and few people except for Roys, Mullen, and myself seem to care.

Well so far, we’ve heard nothing.

I wonder if RZIM is one of those wealthy clients that has some *Delicate Matters?”

I think Boz is getting onto something here.

Sounds like a good idea. I would also add that it might be good to listen to the victims of Rick Trotter, brother-in-law of Bryan Loritts, to see if they’re doing well.