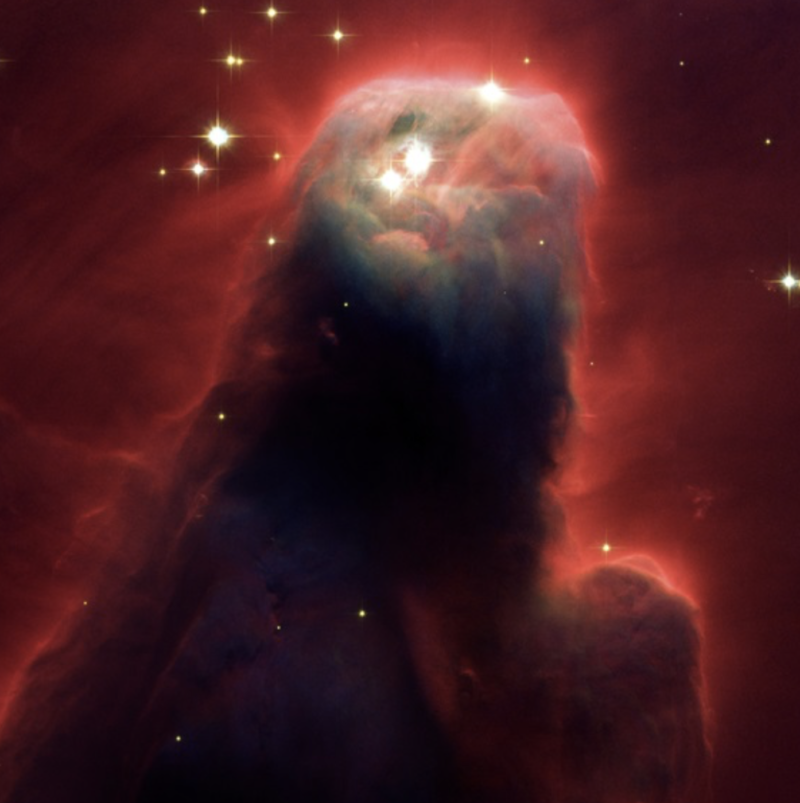 The path of the cruciform life does not, in fact, “work” if we judge it by the standards of success that have enveloped us since birth. . . . In the short-run, eye-for-an-eye Darwinism produces much better results than Sermon-on-the-Mount Christianity. Russell Moore

A couple of weeks ago, I wrote Russell Moore Resigns From the ERLC and Moves to Christianity Today While Media Registration for the SBC Convention Is Carefully Controlled
At the end of the portion on Moore, I asked the following questions.

Due to the excellent reporting by Julie Roys and Religion News Services, we have some interesting answers to a few of those questions. The Roys Report posted the Leaked Letter: Russell Moore Says He Left SBC Over Sex Abuse & Race Issues, Not Trump The letter is an eyeopener. So what did he tell the ERLC trustees a little over a year before his resignation?

Was it about politics surrounding Donald Trump? No.

(Please do not let this devolve into a political debate because it would miss the very real concerns expressed by Moore.)

At the above link, you can read the entire letter that Moore wrote to the ERLC trustees in February 2020. It was posted originally by Religion News Services. The first answer to one of my questions was surprising. His concerns had nothing to do with the controversy surrounding the former President.

But in his letter to the trustees, Moore claimed most Trump supporters he met had “been nothing but kind and encouraging to me.”

Was it about sex abuse in the SBC? Yes!

According to this letter:

Instead, he argued, “the presenting issue here is that, first and foremost, of sexual abuse.”

As we know, Moore was a huge supporter of JD Greear’s wish to investigate the ten churches named by the Houston Chronicle. The SBC Executive Committee only chose to look at three of them and then broadly exonerated the others.

According to Moore’s letter:

“This Executive Committee, through their bylaws workgroup, ‘exonerated’ churches, in a spur-of-the-moment meeting, from serious charges of sexual abuse cover-up,” Moore complained in his letter.

As an aside in the Roys Report was this comment about Loritts and JD Greear.

While he called for investigation into other SBC churches’ sexual abuse cover-up, Greear hired Bryan Loritts as executive pastor at Summit Church despite allegations related to a previous church where Loritts had been on staff. An investigation commissioned by Summit found “no convincing evidence” Loritts covered up sex crimes, but failed to resolve significant discrepancies and questions.

When The SBC Executive Committee appeared to channel the Godfather.

Now it gets interesting. Apparently, Rachel Denhollander criticized the EC during the dumpster fire known as Caring Well. In an interview with Moore:

Denhollander criticized the Executive Committee for how it had reported on the case of Jennifer Lyell, who had accused a Southern Baptist seminary professor of abuse.

Uh oh! Are these guys threatening Moore? Sounds like it to me.

After the conference, Moore said in the letter, he had received a veiled threat from Executive Committee trustees, characterizing it as being delivered with Mafia-like menace: “You’ve got a nice little Commission there; would be a shame if something happened to it.”

Was it also about racial reconciliation? Yes!

According to the letter:

“At the same time,” he wrote, “the other absolutely draining and unrelenting issue has been that of racial reconciliation.”

He said there was concern about critical race theory.

On race issues, Moore claimed in the letter that SBC leaders had been concerned about the ERLC promoting critical race theory,

However, it went deeper than that when an SBC leader expressed concern that most black *girls* are egalitarian. This is not my wording but the wording of some stupid SBC leader. Good night!!!

‘I was really just concerned about that black girl, whether she’s an egalitarian,’” referring to the hire of Trillia Newbell to the ERLC and questioning her commitment to the SBC’s complementarian gender theology.

During the 2019 SBC annual meeting in Birmingham, Alabama, Trillia Newbell offers a lamenting prayer for the sexual abuse that’s occurred in the church. (RNS photo by Butch Dill)
“When I asked what possibly could lead him to think that a woman who has written complementarian articles for complementarian websites was an ‘egalitarian,’ he responded: ‘A lot of those black girls are,’” Moore recalled in the letter.

Mike Stone was on the Executive Committee and caused Moore *psychological terror.*

I believe that this sort of thing could be quite true.

Their objections, Moore charged in colorful terms he disavowed, were that he was “‘not playing enough to the Bubbas and the rednecks; they pay the bills.’”

…While Stone has said in the past he was not seeking Moore’s resignation, Moore in his letter said this was part of a strategy to keep him “in psychological terror, so that I will not say what the Southern Baptist Convention has assigned me to say, much less to reveal what I know about what goes on behind the scenes.”

Years ago, I read Wade Burleson’s book: Hardball Religion: Feeling the Fury of Fundamentalism. He documented his time on the IMB. I think that he would agree that if one runs afoul of these *good old boys,* one can expect a hardball response. There was the *knife* incident which I will never forget. So, I find Moore’s “psychological terror” quite believable.

So, Russell Moore did what hundreds of thousands of us have done: he *done quit* the SBC.

Digression: I have always wondered about that * in-residence* thing. I suspect it is one way for the church to call someone “super dee dooper” special.” I wonder if I should begin an *in residence* program for TWW. For a small, yet somehow significant love offering, I will begin taking applications for the positions. In the meantime, I now pronounce myself as *blogger in residence.*  End digression.

Immanuel Nashville is a conservative evangelical congregation that is affiliated with the Acts 29 church planting network. It is not a Southern Baptist congregation,

I have written several blog posts about the tendency of church leaders in this *network* to be heavily authoritarian, despite what they may say about being autonomous, diverse, and all that other nice-sounding stuff. However, I don’t think Moore has to worry about being church disinclined. He will be a *celebrity in residence.*  In fact, I have found that the Acts 29 DNA doesn’t stray far at all from its celebrity leader, Matt Chandler. But maybe I shall be proven wrong. I would really, really like that to happen.

Digression Alert: So, I was scrolling through the leadership of Immanuel Nashville, and look what I found. Another celebrity, actually a  child of a celebrity, who is an assistant pastor. 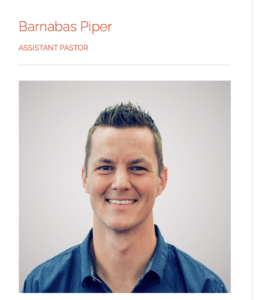 Here is his blurb. It leaves out the fact that he has a wife. End digression alert.

So many people have left and are leaving the SBC. Many folks like Moore and myself have faced some significant blowback within the SBC. His was from a much at a higher level of SBC leaders. Mine was from a bunch of local SBC church leaders.  However, being treated poorly and threatened sure helps one to be grateful for a new beginning.

Moore’s new *pastor to pastors, Ray Ortlund, seems to be an outspoken supporter of CJ Mahaney and reportedly just spoke at a Sovereign Grace Church 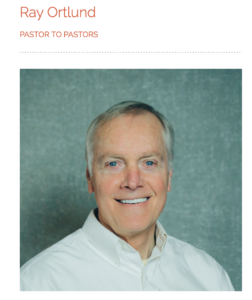 Maybe we will learn more about Moore as he sheds the shackles of the SBC.