While it has been evident for several years to anyone with a pulse that Mark Prater’s statement from 2014 is a brazen lie, one cannot be faulted for wondering if Prater is familiar with the OSS psychological profile of Hitler and has applied it to the case of covering up the sexual abuse of children in Sovereign Grace churches. Hitler’s profile “described his use of the big lie: never admit a fault or wrong; never concede that there may be some good in your enemy; never leave room for alternatives; never accept blame; concentrate on one enemy at a time and blame him for everything that goes wrong; people will believe a big lie sooner than a little one, and if you repeat it frequently enough people will sooner or later believe it.” (Source).

Listen to Prater extol the “expressions of humility,” so evident to all, of Sovereign Grace Pastors!

Next, listen to a short excerpt of Mark Prater from his State of the Union Address at the December 2020 Pastor’s Conference. Prater attempts to rally his ragtag band of graduates from Sovereign Grace’s 10-month “Pastor’s College” to shed their shame of being identified as a part of their beleaguered denomination and instead “celebrate our gospel culture.”  That’s right – turn that frown upside down! I’m not really sure what kind of “gospel culture” Prater is peddling, but when you continue to put forth the big lie highlighted in Prater’s statement above, I don’t believe you will have many buyers.

Brent Detwiler has written an excellent article titled, “The Conspiracy to Cover Up the Sexual Abuse of Children Under C.J. Mahaney Grows as Shannon Truesdale Comes Forward to Tell Story of Abuse by Her Father & Sister.” Below are some quotes from the article.

Jeff Truesdale, the father of Shannon Truesdale, was a prominent member of Covenant Life Church in Gaithersburg, MD from its beginning in 1977 until he left 37 years later in 2014.  He knew senior pastor C.J. Mahaney extremely well and was good friends with all the pastors on staff.

I met Truesdale in 1982 when he attended a year-long Leadership Training School I conducted for Covenant Life Church (CLC).  We were not close friends but I knew him over the years.  After I sent out The Documents in July 2011, he was one of my sources at CLC.  He was deeply offended (along with hundreds of other members) when C.J. Mahaney fled CLC in August 2011 and escaped to Mark Dever’s Capitol Hill Baptist Church in Washington D.C. when issues of sin were being addressed in his life.

Truesdale was an esteemed member of the church but in reality, he lived a double life of lying, drinking, getting stoned, and sexually abusing his oldest daughter, Suzanne for approximately eight years.  Suzanne, in turn, sexually abused her younger sister, Shannon for seven years.  Shannon is the one who has come forward to tell her story.

In like fashion, Shannon was told by her mother not to tell a soul about Suzanne’s abuse of her.  As a result, she suffered greatly and received no professional help until she sought it at age 21.

In addition, Suzanne was present on two occasions when John Loftness, Gary Ricucci (Mahaney’s brother in law) and Steve Griney acted together in committing crimes against her, Heather Thompson-Bryant, and Jessica Roberts-Thomas. [See Second Amended Complaint.]

The conspiracy to commit and cover up the sexual abuse of children under Mahaney is a matter of fact, not fiction!  This is another account of incomprehensible evil.

BRENT: I respect what you are doing Shannon so very much.  Yes.  I really, really do.  So when the abuse became known in your family between your Dad and Suzanne [1996], did they go to the pastors and talk about it?  Did they tell anybody else about it?

SHANNON: So I believe that Care Group leaders were involved and then pastors.  I know that John Loftness knew.  John Loftness was our pastor for many years.  Many, many years.  Okay.  Then we were handled off to a new pastor [in 2006] which I cannot remember his name [Eric Sheffer].  I keep seeing his head in my brain but I cannot tell you what his name was.  He was from the Pastors College.  He graduated and he was part of our church for a very short time when I was a part of it.  But he was also aware.  Adam Malcolm was aware of it.  Joshua Harris, they all were aware and helping us through this whole process.  Only my parents were going to the pastors for counseling [in 1996] because Suzanne moved out and that is what gave her the strength to tell my Mom what had happened.  So she wasn’t even living at home when they were kind of starting all of the whole process.

Brent Detwiler forwarded his article to Joshua Harris. You will recall that Joshua Harris was mentored by C.J. Mahaney and then took over as Senior Pastor at Covenant Life Church, leaving Mahaney more time to pursue speaking at conferences and distributing books that ghostwriters authored for him.

Harris resigned from his position at Covenant Life Church in 2015 and moved to Vancouver, B.C. to attend seminary at Regent. In July 2019 Harris took to Instagram to renounce his Christian faith and also announced he was separating from Shannon. 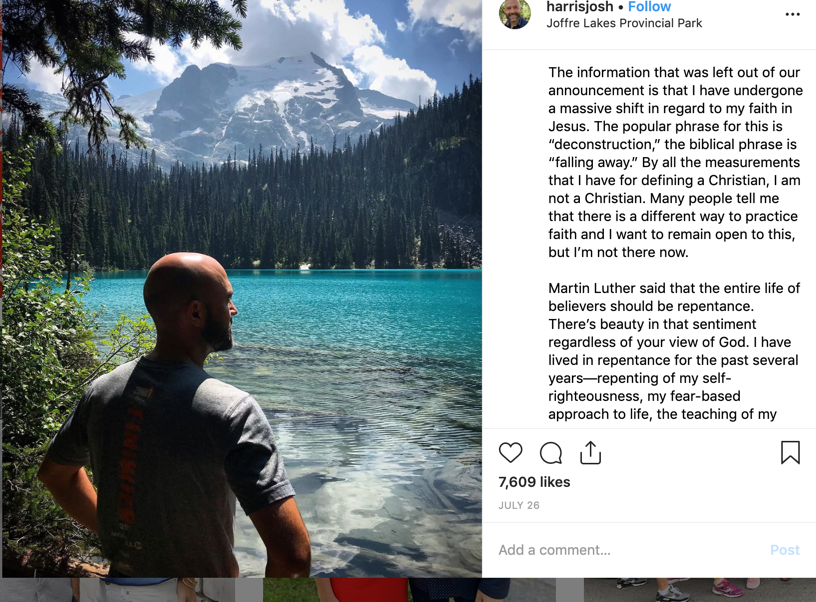 I was shocked to see the Facebook post (screenshot below) by Joshua Harris dated May 5th (link). He has done what no Sovereign Grace Pastor has, that is, he spoke truthfully and admitted his failure as a leader played a part in the pain Shannon Clark (Truesdale) has experienced.  Harris linked to Detwiler’s article – the article I quoted in part above – the article that named names. Names of some pastors who took part in the sexual abuse of young girls and still remain as pastors and leaders in the Sovereign Grace denomination!

Remember the story Jesus told of the Good Samaritan?  He asked, “Now which of these three would you say was a neighbor to the man who was attacked by bandits?”
“The man replied, “The one who showed him mercy.”
Then Jesus said, “Yes, now go and do the same.”

In a similar fashion, I ask which of these would you say was a neighbor to Shannon? The religious leaders in Sovereign Grace, or the man who renounced Christianity? 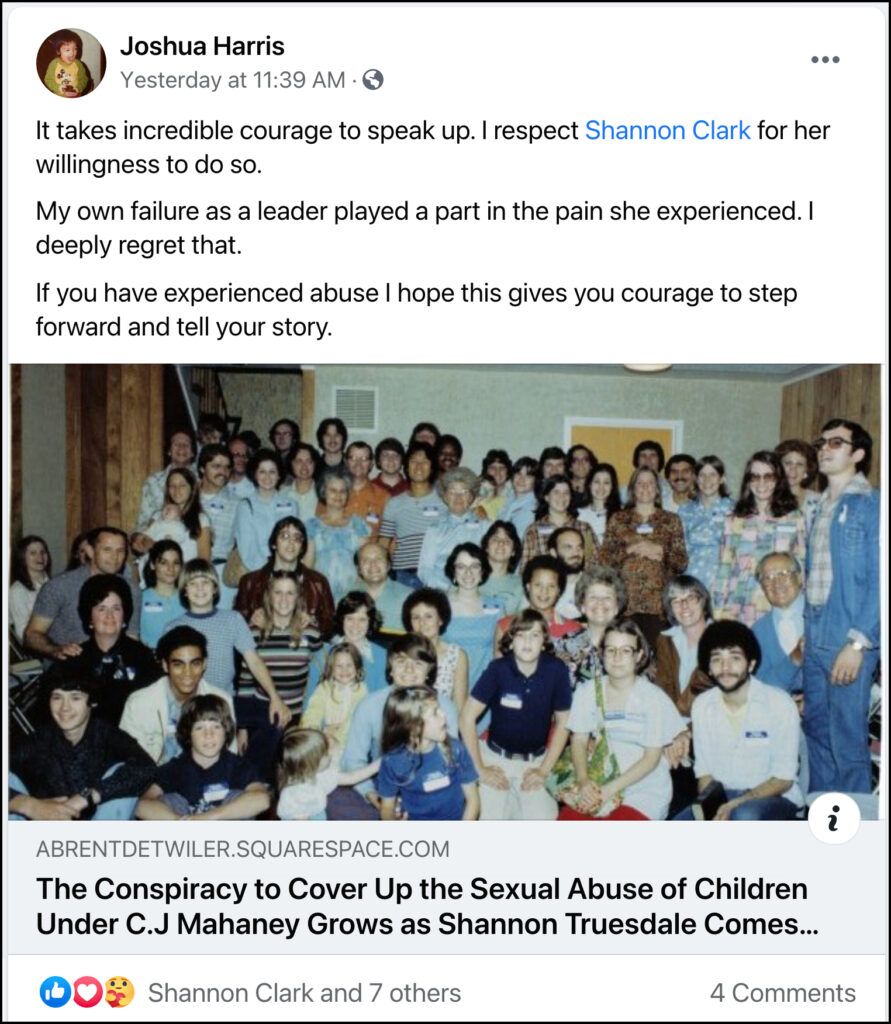