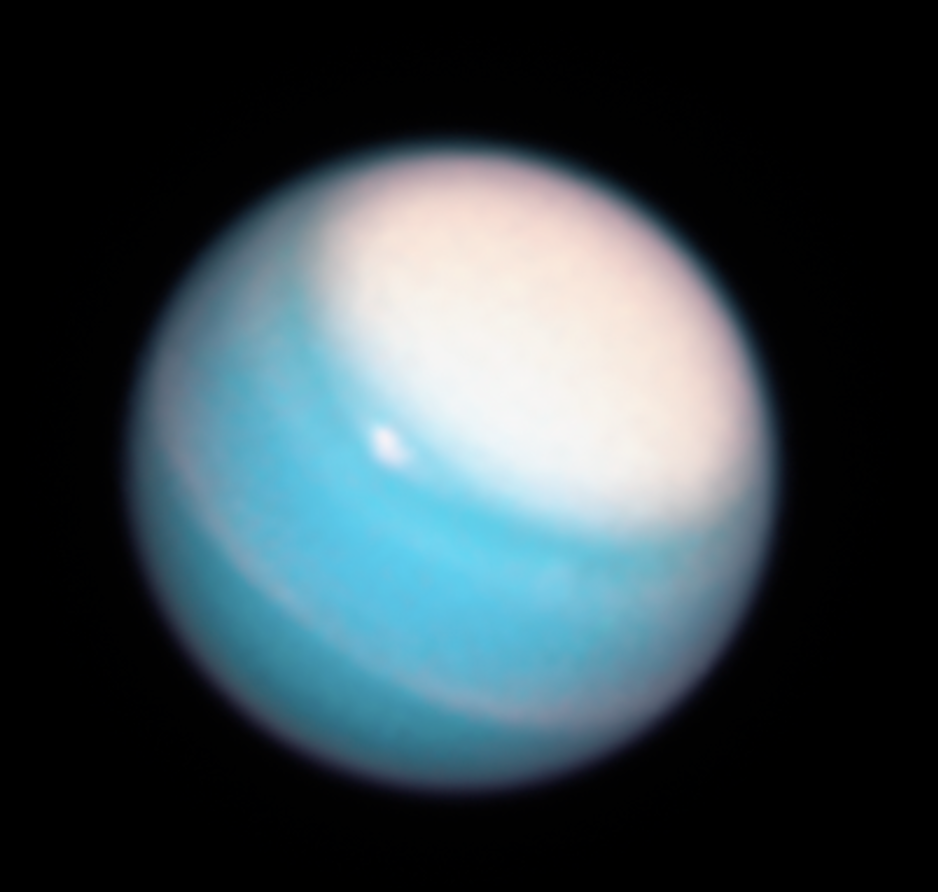 A long-lived storm circling around the north polar region on Uranus. NASA

“The Bible tells us to love our neighbors, and also to love our enemies; probably because generally they are the same people.” ― G.K. Chesterton

This post is subtitled” CJ Mahaney’s church is still affirming the Baptist Faith and Message. How long, Lord, how long?

Last week, my daughter, Abby, visited home to discuss some wedding plans. The guest numbers are up in the air due to COVID restrictions on the size of groups. Even a shower can be limited and she is exploring ideas with bridesmaids for maybe one virtual shower. She has friends all over the cotton-picking place, including Norway! As we were talking, she suddenly changed the subject and asked “Why did you bring us to our former SBC church?” I turned around and said “Oh. no. you. don’t. You three kids got to caterwauling that you wanted to be with your new-found friends (we had just moved back to the area) and demanded we go there.” And just like that, we became Southern Baptist.

Little did I know that this choice would lead to a major change in my life. As I watched this church mishandle (in my opinion)a terrible abuse situation involving many boys and an SEBTS student, I was sadly introduced to abuse in the SBC. Abuse in the SBC would become a focus of a future blog known as TWW. Little did I know that I was getting a first-hand view of the problem.

I will be referring back and forth to this Christianity Today. (CT) is playing along with the game: Southern Baptists Expel Two More Churches Over Abuse. Spend some time looking at this title. It fails to headline the other two churches which were expelled. We’ll get back to it.

While the denomination has seen growth outside its Bible Belt strongholds, including new church plants led by non-Anglo pastors, its membership decline continues to accelerate.

But overall, the denomination’s Annual Church Profile—released today by LifeWay Christian Resources and capturing 2019 statistics—shows a trajectory of serious decline and a sharp challenge for leaders concerned about evangelism and retention.

I don’t believe the following numbers. Insiders know they are a lot lower since most churches do not remove people from their membership rolls and some people can be counted many times as they move from SBC church to SBC church. I think the number could even be half the number stated -@8 million. This is the worst kept secret in the SBC.

All three of my adult kids fit into this next category: the kids don’t stay in the SBC.

Last year, researcher and statistician Ryan Burge—analyzing other survey data about Southern Baptist identity for CT—foundthat fewer children who were raised in the SBC remain in the denomination as adults, suggesting that the bigger factor behind the SBC’s decline isn’t the struggle to gain new converts; it’s keeping their own.

And if you don’t like the outcome, question the process (which I believe could yield much lower numbers.)

This year, Executive Committee chair Ronnie Floyd—who leads the body in charge of denominational business outside of the SBC Annual Meeting—also called the process into question. For the first time, one state convention didn’t provide membership numbers at all: Oklahoma. The profile used estimates based on previous data to calculate the number of Southern Baptists in the Sooner State.

So what about those 2 churches that were excluded? You mean there were four?

It wasn’t two, it was 4 but they would rather not talk about the other two. See the NYT’s headline: Southern Baptists Expel 2 Churches Over Sex Abuse and 2 for L.G.B.T.Q. Inclusion
Subtitled: In a fiery speech, the denomination’s president decried “fissures and failures and fleshly idolatries.”

Do you see the difference between CT and NYT headlines? That’s right. It appears that CT was covering for the SBC by burying the real count at the bottom of the article. I believe that churches should have the right to decide who can and cannot be members. However, I believe they need to be honest about their processes. I have seen this stuff buried on church websites as well. If a church or denomination does not believe that LGBT people have a place in the membership of the church, say so upfront. Be brave. Take the hits. Don’t they believe that Jesus will protect them?

The committee “disfellowshipped” Towne View Baptist Church in Kennesaw, Ga., and St. Matthews Baptist Church in Louisville, Ky., for church policies deemed accepting of homosexuality, in violation of the denomination’s statement of faith.

Towne View’s conversations about becoming an “affirming” congregation, and its decision to accept two gay couples as members in 2019, cost the church at least 30 percent of its membership, Jim Conrad, the pastor, said

Compare the NYT headline with the one from the CT article: Southern Baptists Expel Two More Churches Over Abuse

To be fair they mentioned it later in this article but it was short and sweet, hidden between two other issues. C”mon, folks, report it upfront and take the hits.

This disfellowshipping thing is not having the effect it once had. These churches can join the Cooperative Baptist Fellowship, become independent, or join a growing number of other new denominations. This threat is not the sting it once was.

Two churches were disfellowshipped due to having sex offenders in the pulpit. CJ Mahaney’s church is still a cooperating member.

At least Baptist Press mentions 4 churches in SBC Executive Committee disfellowships four churches. Hee are the other two churches that got disfellowshipped over having convicted molesters in the pulpit.

Antioch Baptist employs as its pastor John Randy Leming Jr., who pleaded guilty to two counts of statutory rape for oral sex with a 16-year-old congregant when he pastored Shiloh Baptist Church in Sevier County. He pleaded guilty in 1998 to the offenses that occurred in May and June of 1994, when he was 31, and lost his appeal of the concurrent 18-month sentences he deemed harsh.  Leming has served at Antioch since March 2014,

West Side Pastor David Pearson is listed on the National Sex Offender registry for his 1993 conviction of aggravated criminal sexual assault of a child in Denton, Texas. Contacted by Baptist Press regarding the EC’s action, Pearson said he had no comment.

West Side Baptist Church was previously disfellowshipped by the Baptist Resource Network of Pennsylvania/South Jersey, but continued to affiliate with the SBC.

I would hardly brag about this action. It was a slam dunk. Can you imagine this denomination has ignored these churches for so long? Shame on them. This was more virtue signaling. Going after the easy pickings. This committee is studiously ignoring the large number of churches mentioned in the Houston Chronicle exposé. Those churches are too large and too influential, unlike the dinky little churches with molesters in the pulpit they easily threw out of the SBC (and even they didn’t care.)

I bet that was well received.

According to the NYT article, Greear seems to be quite concerned over the expressed concerns of critical race theory.

“Do we want to be a Gospel people or a Southern culture people?” Mr. Greear asked in his speech on Monday night. “Which is the more important part of our name, ‘Southern’ or ‘Baptist’?”

But an increasingly influential conservative wing of the denomination accuses those leaders of prioritizing “social justice” over biblical truth. They denounce the encroachment of “critical race theory” — an academic framework intended to capture the deep influence of racism — and accuse the S.B.C.’s national leadership of being out of step with the rank and file.

The public hostility to critical race theory, which some call frank and necessary discussions of racism, prompted several high-profile Black pastors to leave the denomination in December.

Let me outline the basic problem for the SBC As we have said on this blog, it is so easy to dump an SBC affiliation and become nondenominational. Removing the ability of a church to seat messengers and vote at the huge SBC convention is not viewed as the privilege it once was.

Add to that the problem with:

It is so easy to walk out. Few care that they can’t vote at the SBC convention. I predict that the next few years will be quite difficult, with or without demons.