“Nothing is as important as the truth.”
Ravi Zacharias
(The Real Face of Atheism, page 105)

In an article published by Julie Roys on December 23, titled “Interim Report Finds Ravi Zacharias “Engaged in Sexual Misconduct Over Many Years,” Roys included an interim report by Miller & Martin, PLLC which was published on December 22, 2020. Miller & Martin is the law firm hired by Ravi Zacharias International Ministries (RZIM) to investigate numerous allegations of sexual misconduct committed by the now-deceased Ravi Zacharias. The interim report states in part:

As to methodology, we contracted with a well-regarded private investigations firm to assist in this matter. Over the past several weeks, our investigation team has interviewed dozens of witnesses (whose identities will remain known only to the Miller & Martin investigation team, as agreed to by the RZIM Board of Directors), including many massage therapists who treated Mr. Zacharias. Some of the therapists with whom we spoke worked at the Touch of Eden and Jivan Wellness spas mentioned in the September 29, 2020 Christianity Today article, and others provided treatments to Mr. Zacharias at different points in time. In addition to witness interviews, we have reviewed numerous documents and electronic devices used by Mr. Zacharias over the years…

While some of the massage therapists we have tried to interview are not willing to share their experiences with us, many have spoken candidly and with great detail. Combining those interviews with our review of documents and electronic data, we have found significant, credible evidence that Mr. Zacharias engaged in sexual misconduct over the course of many years. Some of that misconduct is consistent with and corroborative of that which is reported in the news recently, and some of the conduct we have uncovered is more serious. Our investigation is ongoing, and we continue to pursue leads.

The Wartburg Watch published an article on September 9, 2020, titled Ravi Zacharias – Working the Kinks Out While Earning Extra Cash for Spreading the Gospel!” This article included a video published by “The Friendly Banjo Atheist” on September 8, 2020. The video contained “far and away the most troubling thing about Mr. Zacharias ever to come to light.”  Steve Baughman, The Friendly Banjo Atheist, proceeded to inform us that Ravi Zacharias had a side business – he had owned two health spas/massage clinics. One clinic was called “Touch of Eden” and was located in Alpharetta, GA, the home of RZIM, the other, Jivan Wellness, was located in Johns Creek, GA. 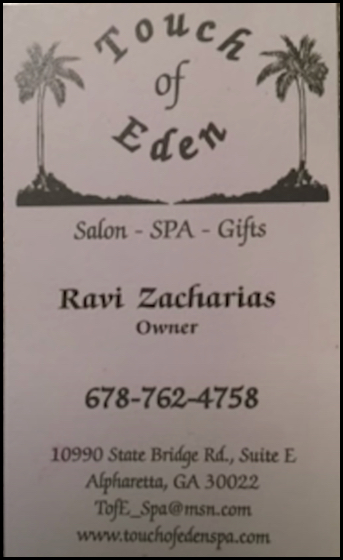 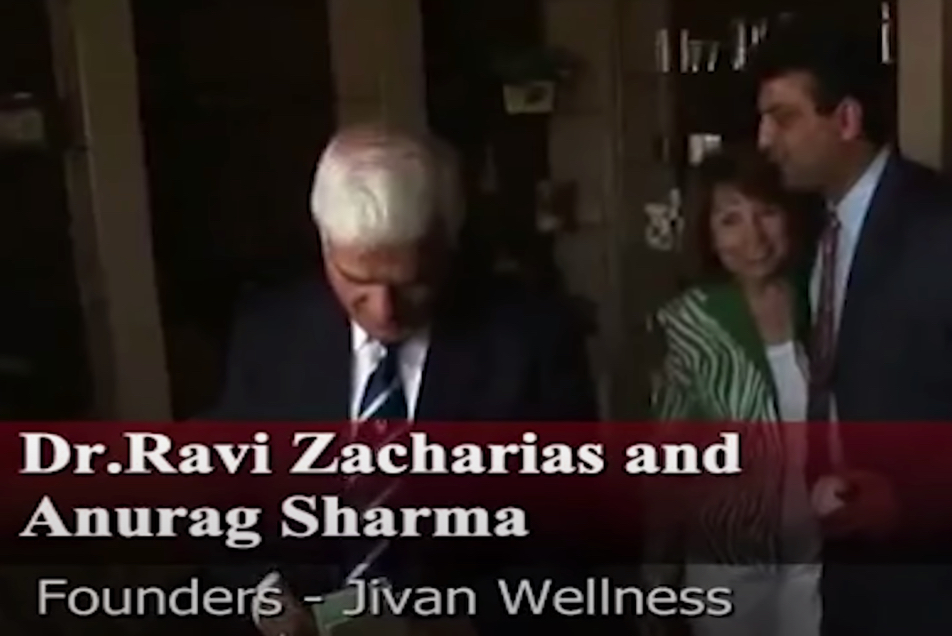 Mr. Baughman spoke with Ravi’s partner, Anurag Sharma, and two women who were employees at this clinic and they alleged that Ravi Zacharias was getting more than massages at the clinics.  One female employee stated, “I had a close relationship with Ravi. He was a sexual pervert. I know of many women he molested.” Baughman asked Sharma “What was it like to see Ravi preach against sexual immorality while he was being immoral with the therapists?” Sharma responded, “That is probably the reason I killed Jivan.”

I happen to know that Steve Baughman has been the recipient of much abuse from “Christians” for publishing the results of his careful investigations. Check out some of the comments on the video to get a taste of what Baughman has put up with. His work has now been shown to be accurate. In my opinion, there are many “Christians” who owe an apology to Baughman.

I now will highlight an aspect of this scandalous story concerning Ravi Zacharias’ sexual misconduct that has gone largely unnoticed. Specifically, I wish to examine the role played by Johnny Hunt, one of the top luminaries in the echelon of SBC leaders.

Who is Johnny Hunt? This from Wikipedia:

In June 1996, Hunt was named the President of SBC Pastor’s Conference. On March 11, 1997, the Johnny Hunt Chair of Biblical Preaching was established at the Southeastern Baptist Theological Seminary. In June 2008, Hunt succeeded Frank Page as president of the Southern Baptist Convention, and served in that capacity for 2 years. He was succeeded by Bryant Wright.

In November 2016, His church celebrated his 40 years in ministry and serving as senior pastor at First Baptist Woodstock Church for 30 years.

In August 2018, Johnny, alongside his wife Janet, announced to FBC-Woodstock that he would be transitioning out of his full-time pastoral position to fulfill a Senior VP ministry for the North American Mission Board. 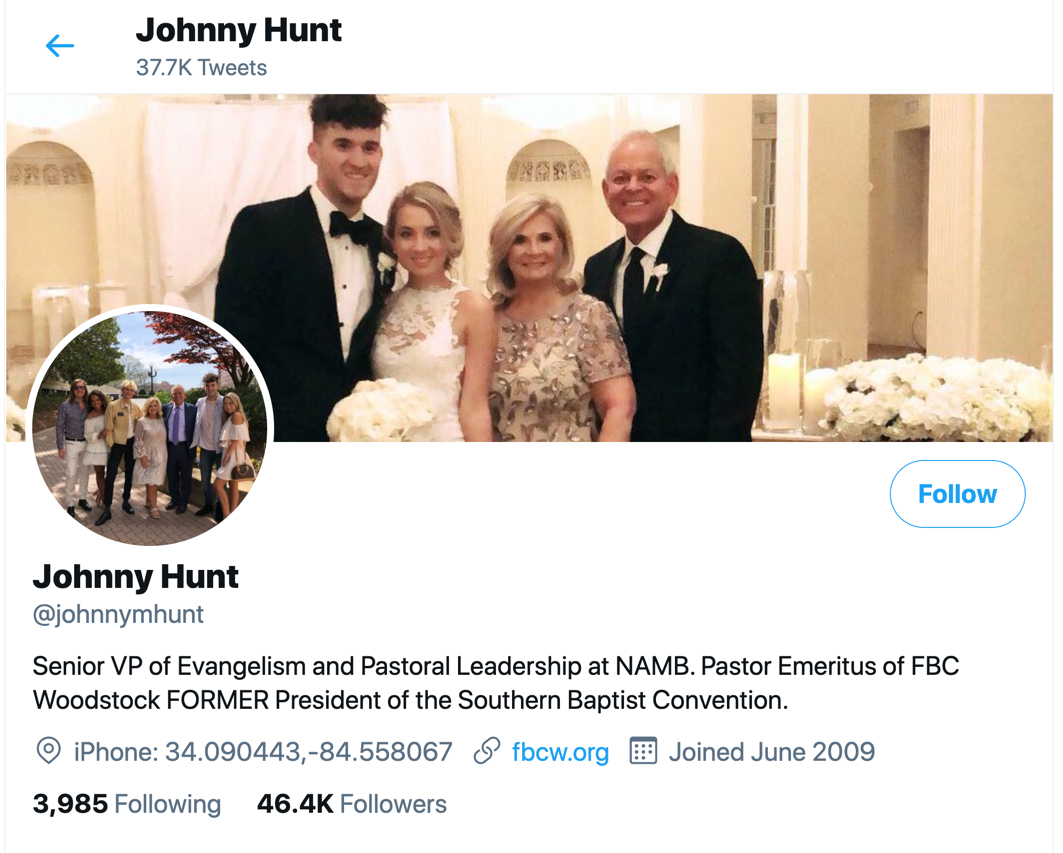 One does not rise to the rank of President of the SBC without having many friends in high places within the SBC. Such is the case with Johnny Hunt.

As is so often the case in the SBC, the “Good Ole Boy” network was alive and well in the appointment of Johnny Hunt. NAMB President, Kevin Ezell may have hired Johnny Hunt to what is undoubtedly a financially lucrative job as part of a quid pro quo transaction wherein Hunt gave the Timothy+Barnabas Ministry to NAMB. “Reform NAMB” raised some questions about the whole deal, citing concerns about a reportedly closed-door meeting between NAMB leaders and Johnny Hunt. 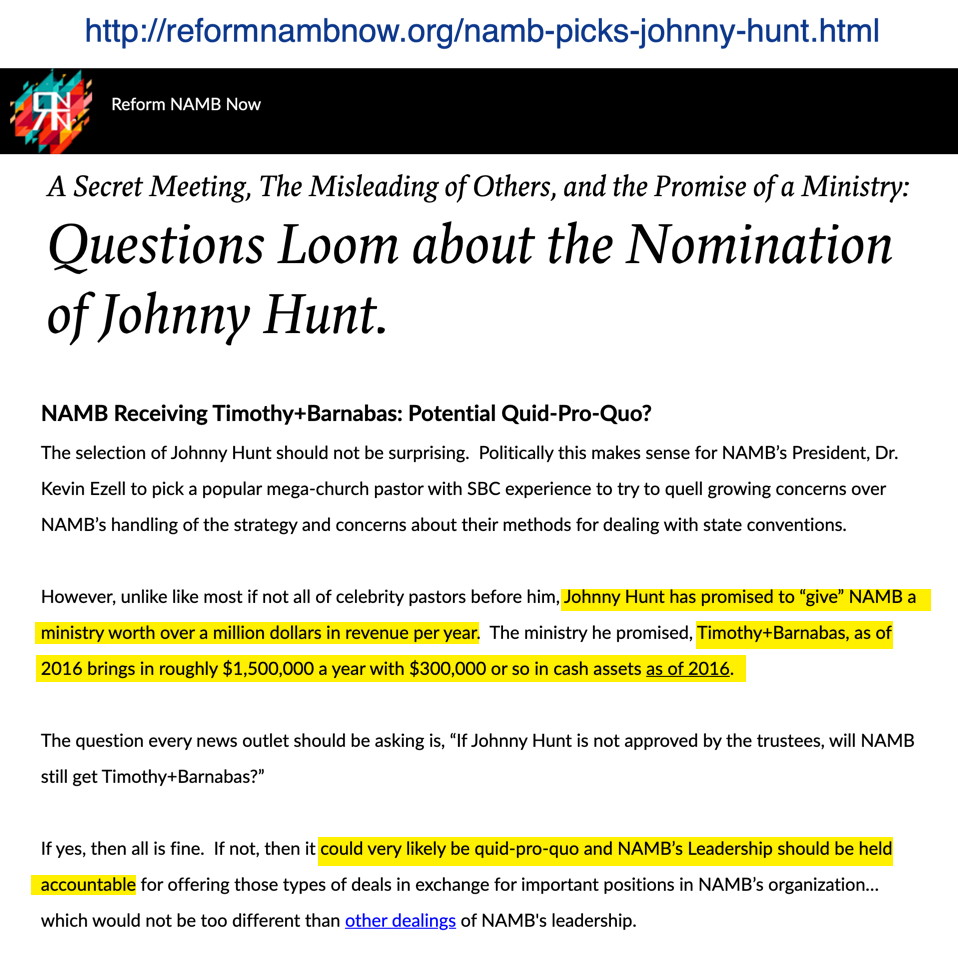 Additionally, in what appears to perhaps have been a “package deal,” Jim Law was hired by NAMB as Executive Director of NAMB’s  Evangelism and Leadership Group. Law is a long-time friend of Johnny Hunt, having served under Hunt when Hunt was the SBC President in 2008-2009. It would be interesting to know the salaries of Hunt and Law, salaries paid through the generous donations of SBC church members. 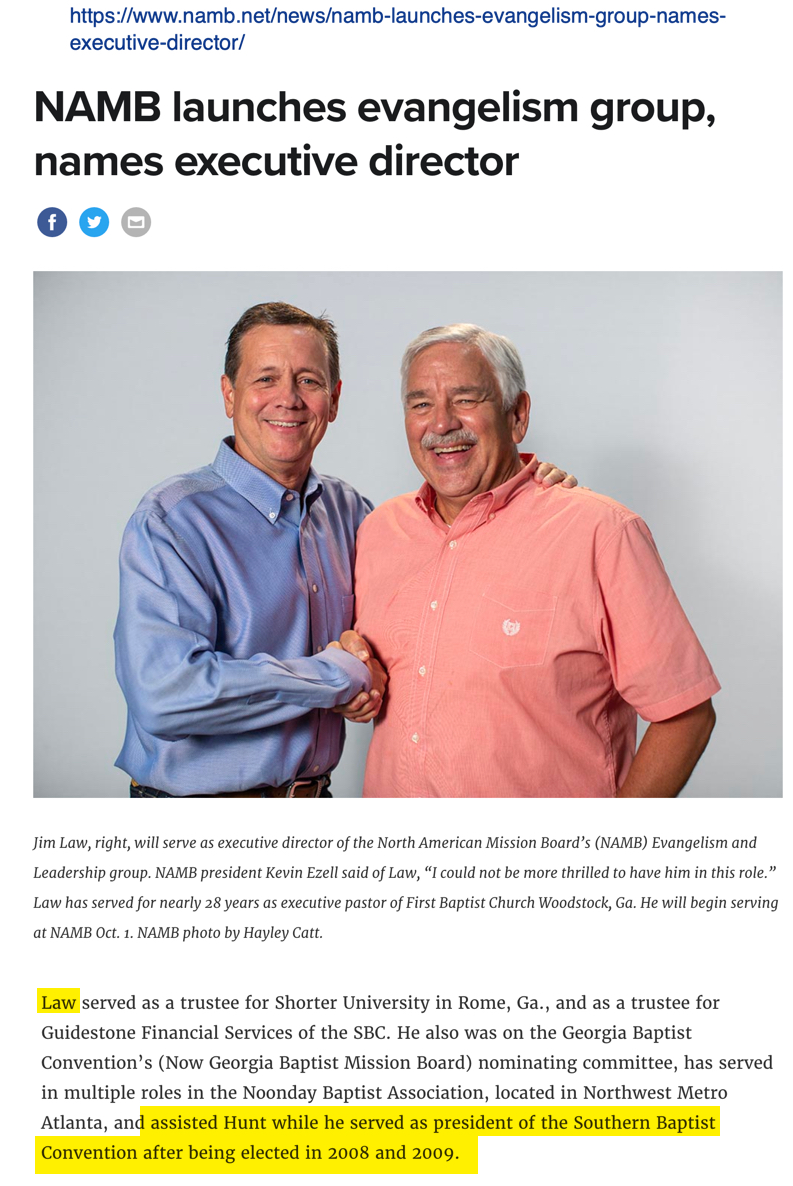 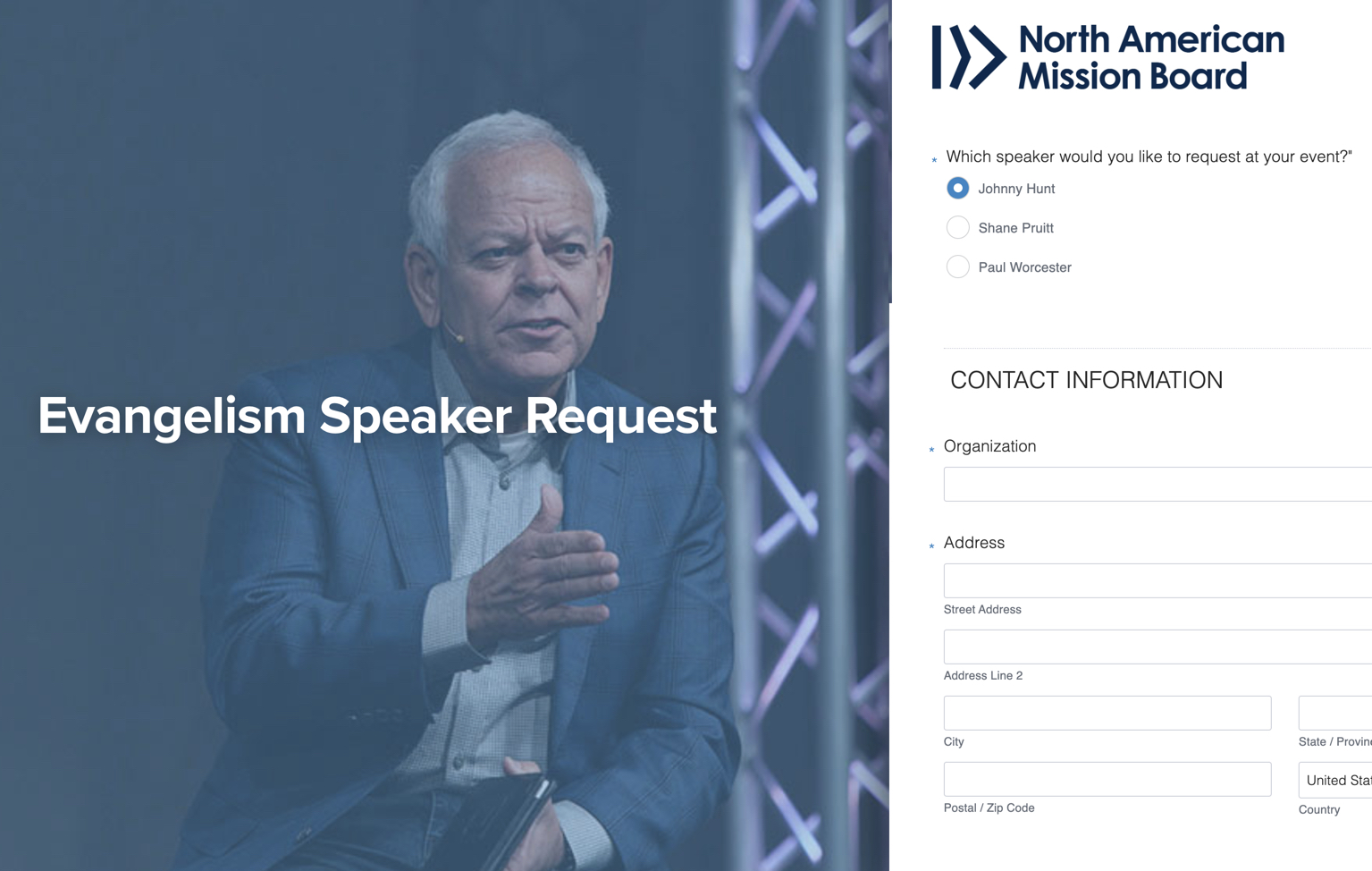 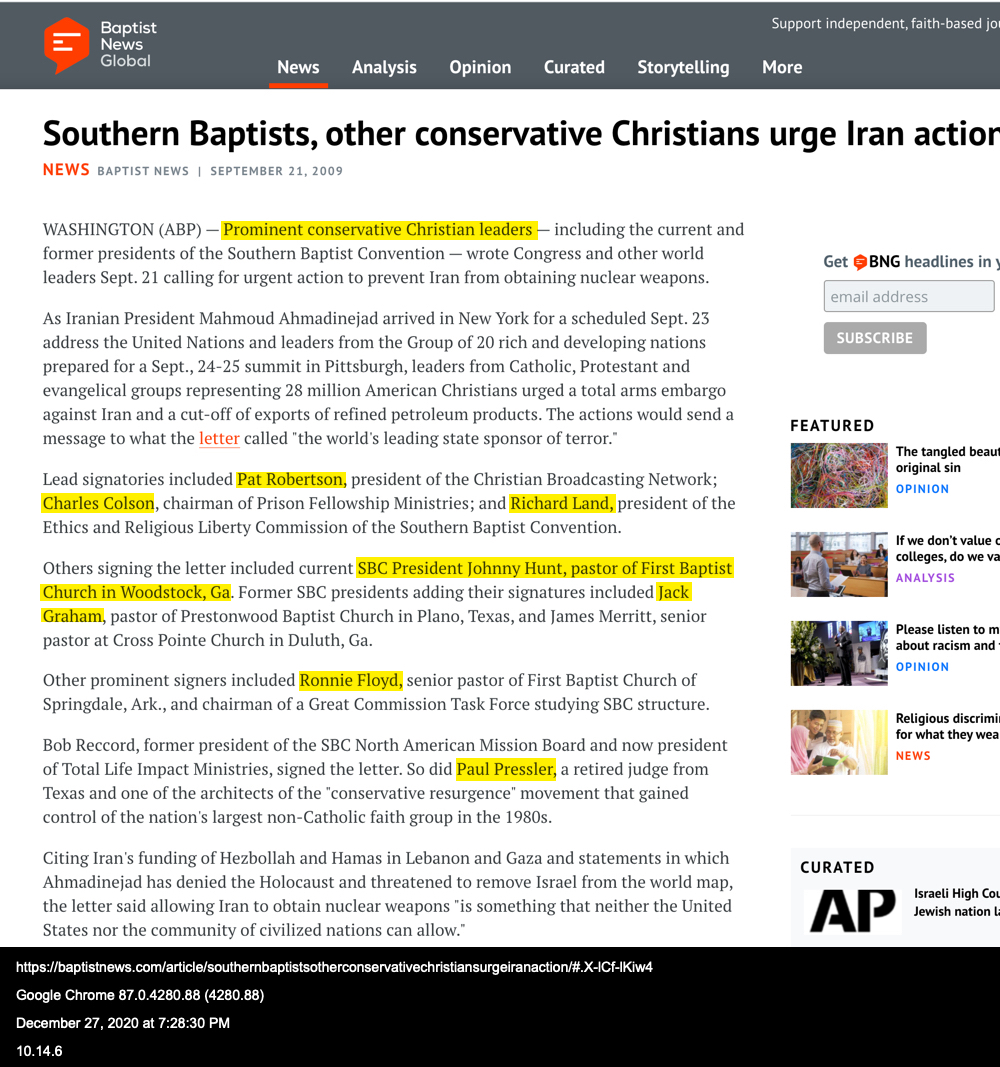 (Note from editor: it was brought to my attention that the preceding line is incorrect.) As the article below indicates, Hunt clearly identified with the old guard, including Patterson, Pressler, Rogers and Vines. 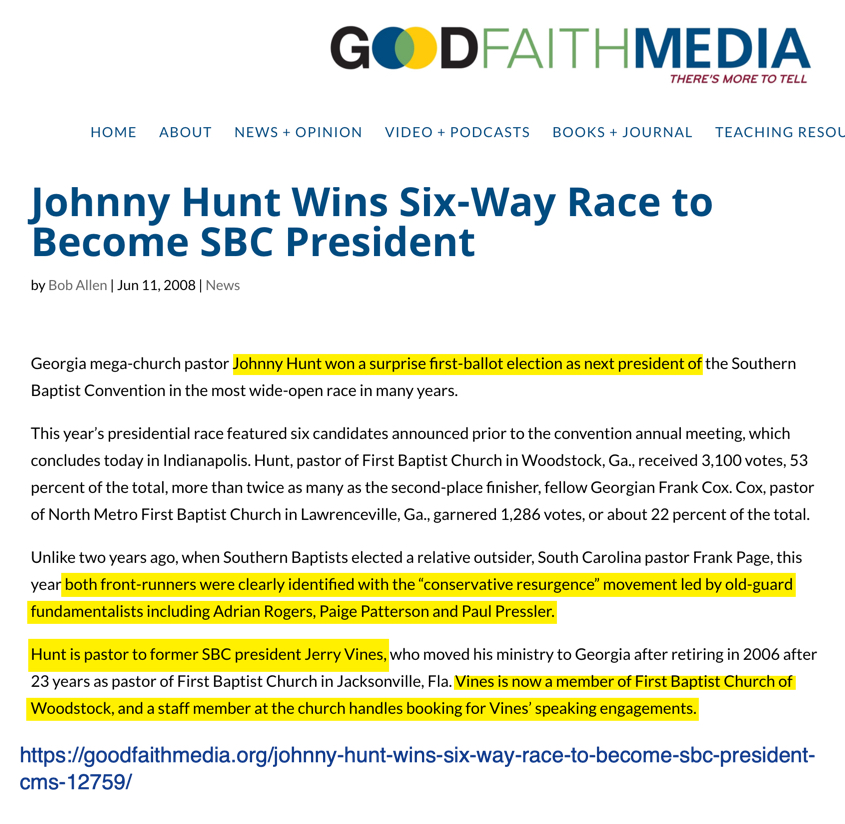 Here is a Tweet by Hunt supporting Patterson who was under fire for his mishandling of a rape case and general mistreatment of women. The document referred to is no longer on the Southwestern Seminary website, but can be viewed here. 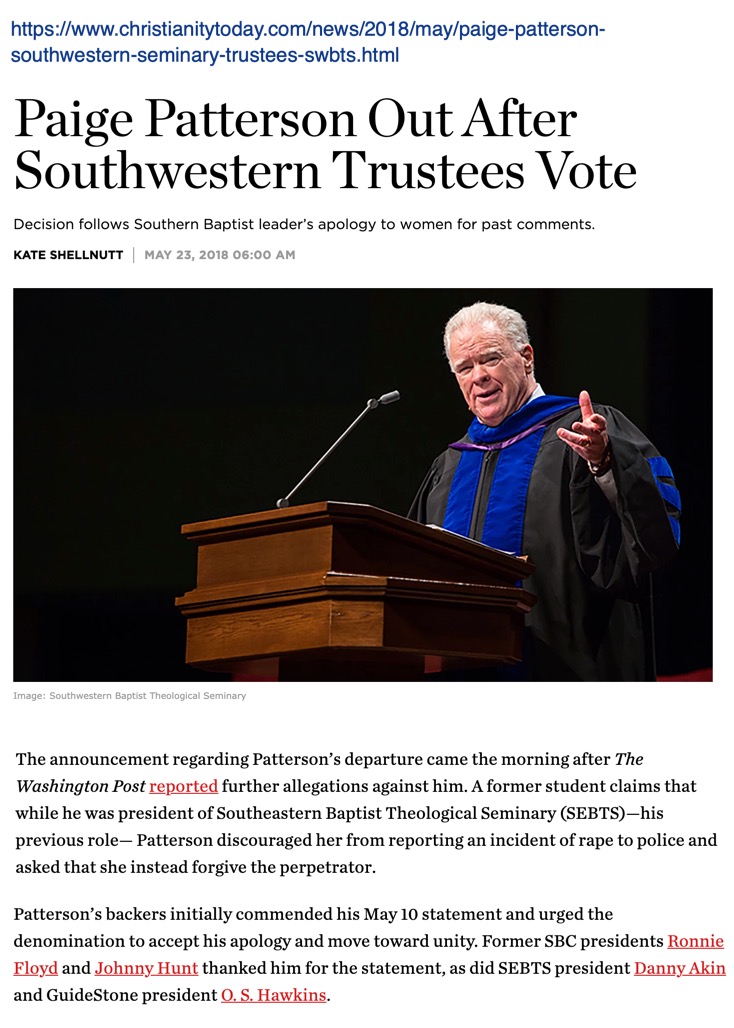 Patterson and former Judge Pressler, a man who, along with Paige Patterson, was renowned for restoring conservatism to the SBC, also frequented the same group of associates as Hunt. Pressler is now infamous for his alleged long-time attraction to young men.

As questionable as the actions of Paige Patterson and Paul Pressler (former SBC leaders) were, I cannot imagine them thinking that speaking at the grand opening of a health spa/massage clinic would ever be a good idea. Yet, Johnny Hunt did exactly that!

Below is a clip from Baughman’s video which exposed the utter corruption of Ravi Zacharias. While recording the video Baughman was interrupted by a phone call from Senior VP for Evangelism and Pastoral Leadership at NAMB and Pastor Emeritus of FBC Woodstock, Johnny Hunt.

Unbelievably, Hunt informs Baughman that Ravi Zacharias “would fly women in from India to do the treatments” for his back pain. (I guess there is not a single competent masseuse to be found in the Atlanta area, or for that matter, anywhere in the United States.) With what we now know, I suggest what Ravi Zacharias was involved in may be classified as sex-trafficking.

But the always verbose Hunt was not finished. He informed Baughman that Ravi Zacharias’ plan was to”make the gospel known through the profits of the company.” Alrighty then, gospelly-centered sex trafficking. Sounds O.K. to me – said nobody ever. ( RZIM “took in $32 million in donations in 2019, according to reports filed with the Evangelical Council for Financial Accountability.” Just how much money does an organization need to “make the gospel known?”)

Johnny boy was still not finished. When Baughman asked him about the sex charges Hunt replied he had “absolutely never heard such a charge and I was a regular customer.” Really? Do tell more, Johnny. Why were you frequenting the establishment? And please define “regular.”

I would suggest some SBC officials commission an investigation of their own, post-haste. Maybe they could show Johnny’s picture to some of the women whom Ravi Zacharias pulled a “Jeffrey Epstein” on and see if Johnny received similar, ahem, “treatments.”

I had never heard of Johnny Hunt prior to viewing Steve Baughman’s video. Being a naturally curious guy, I decided to view a few of Johnny Hunt’s sermons I found on-line. I have some clips below.

Ouch! I wonder if Johnny tripped because the log in his eye made it difficult to see that step?

Wow, Johnny is a world traveler, not unlike the greatest Christian apologist of the 21st century.

Can’t disagree with the Emeritus Pastor there.

Now this is interesting. Was Johnny’s book, “Demolishing Strongholds” really a number one bestseller? I can’t say for sure, but based on the stats I found on Amazon I would say it is doubtful. 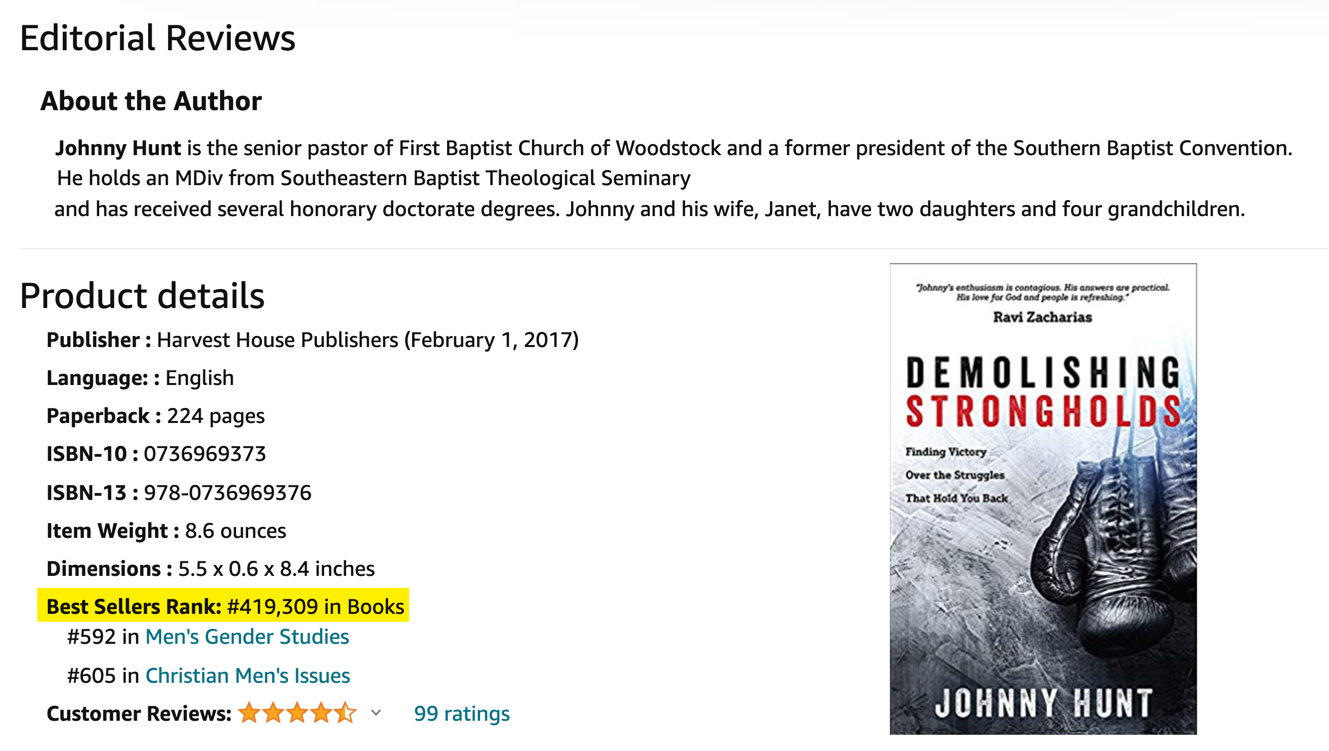 Here is another book authored by Johnny Hunt. Notice who endorsed it? Yep, Ravi.  BFFs? Maybe that is why Johnny defended Ravi. 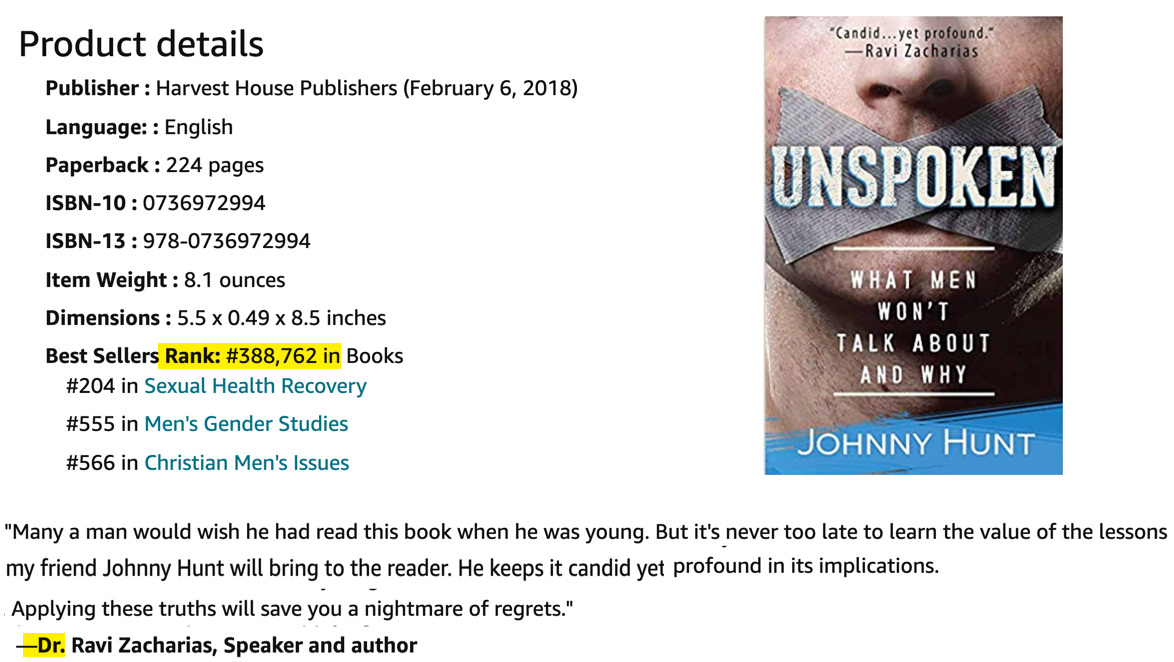 Below are all the endorsements. Notice all the SBC luminaries? 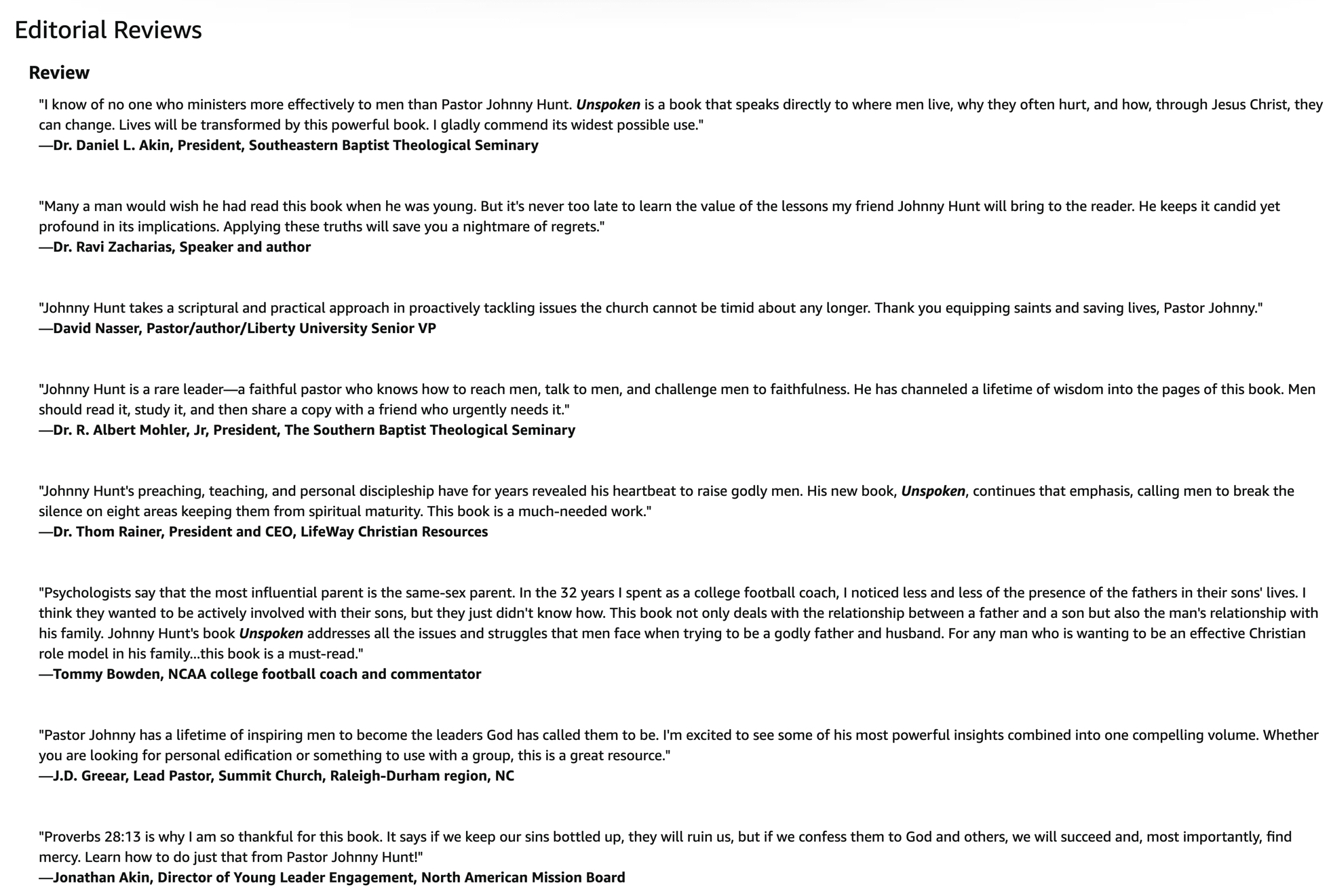 A Catastrophic Betrayal: The “Greatest Apologist” was the Greatest Fraud 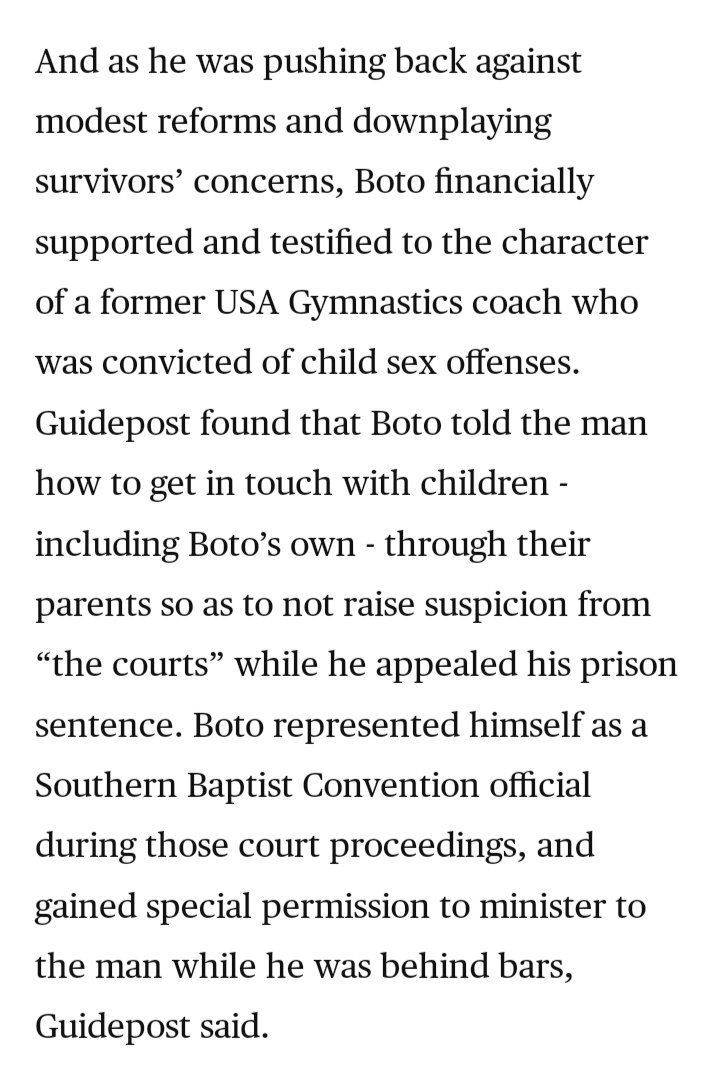 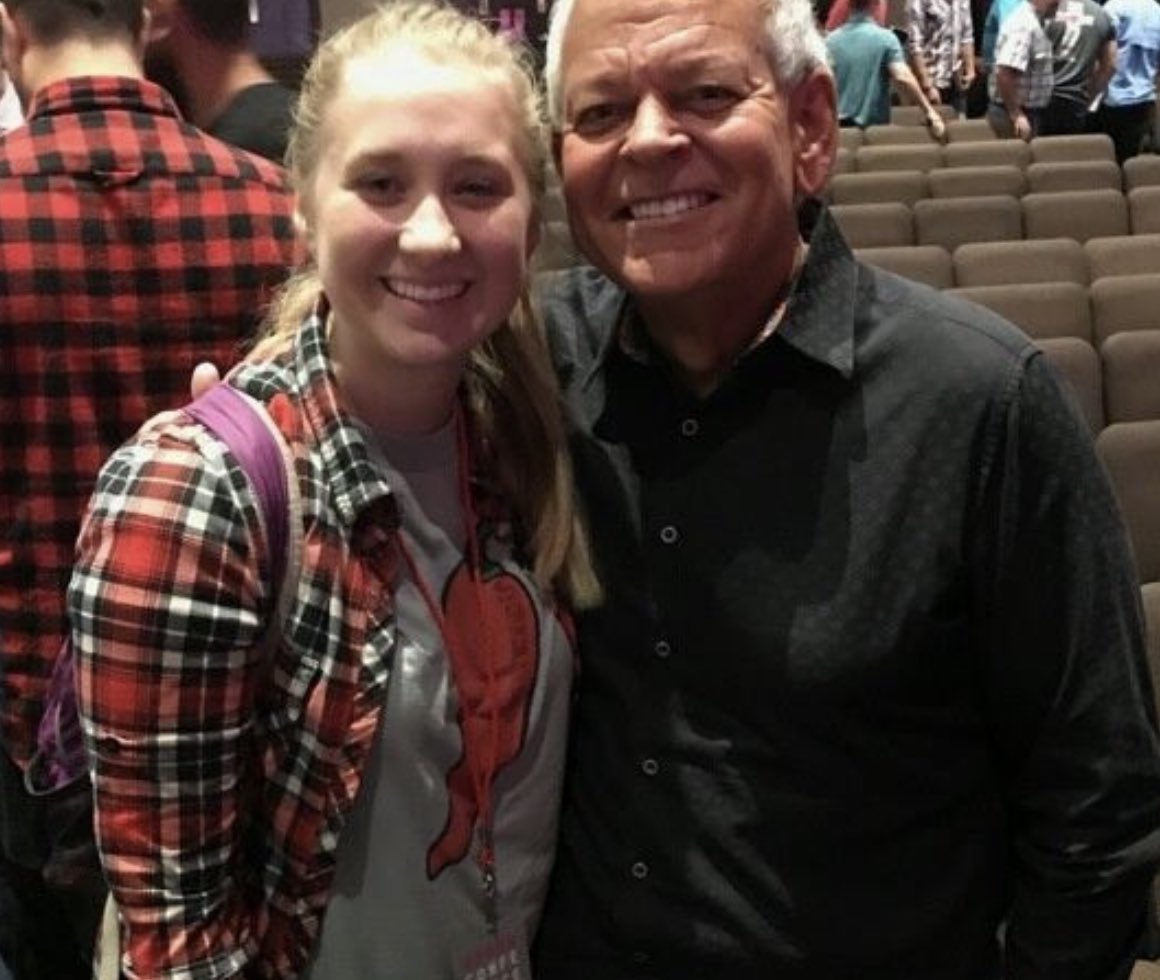