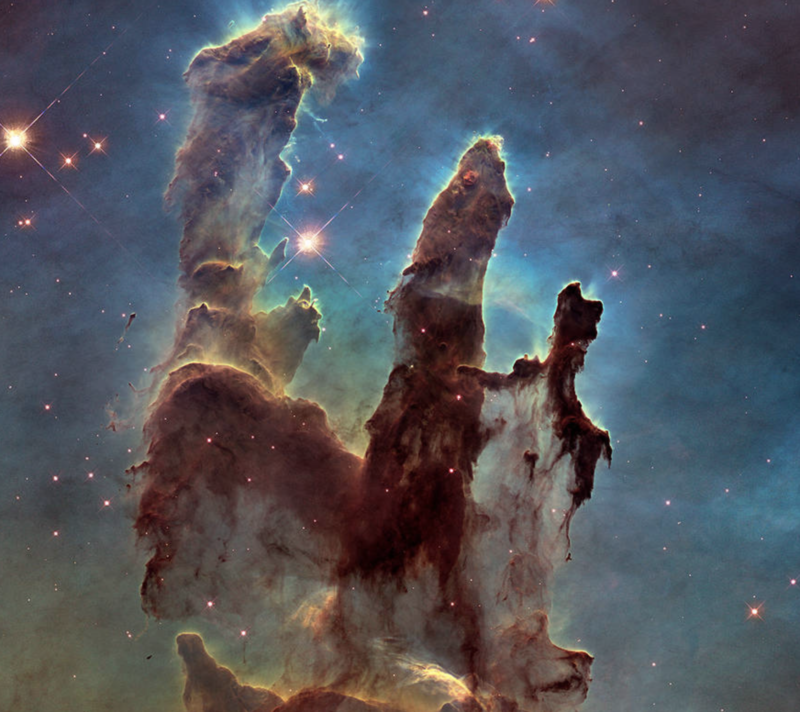 “A celebrity is any well-known TV or movie star who looks like he spends more than two hours working on his hair.” Steve Martin

I am not a fan of Hillsong. It appears that Brian Houston was aware that his father, Frank, who started Hillsong sexually abused children in the church. It is alleged that Brian Houston, now the leader of Hillsong, covered up this sexual abuse. Here is a quick review of what occurred from Wikipedia.

In 2015, the royal commission examined allegations that accused Brian Houston of concealing his father’s crimes and censured him for failing to report his father to the police.[79][78]:12:30 In November 2018, 60 Minutes aired a segment revisiting the sexual abuse scandal, because newly revealed documentation allegedly reveals that Brian Houston was deeply involved in a cover-up and that Frank Houston’s abusive behaviour was worse than initially thought.[78] Brian Houston allegedly used his position within the Assemblies of God in Australia denomination to conceal his father’s serial child sexual abuse.[78] The matter was referred to the New South Wales Police Force, which confirmed that Brian Houston was under criminal investigation for failing to report a serious crime.[75][78]:14:01 Following the 60 Minutes story, Hillsong released a statement in response to the allegations.[76]

Houston and Hillsong deny these allegations. However, in 2019, Houston was not allowed at a White House dinner when he accompanied the Australian Prime Minister to the US. Why Was Brian Houston, Hillsong, Allegedly Not Allowed at White House Dinner Given for the Aussie Prime Minister Scott Morrison? Abuse Coverup Maybe? In my post, I have included a video of a member of Parliament excoriating Houston.

There have been a number of other allegations aimed at Hillsong which you can read about in the linked Wikipedia article.

Carl Lentz: Hypepriest to the stars

Today, I want to focus on the fact that Brian Houston fired Carl Lentz who was the pastor of the celebrity-studded Hillsong New York since it was founded a decade ago. Christianity Today posted  Fired Hillsong NYC Pastor Carl Lentz Apologizes for Infidelity

Lentz, 41, was one of a number of pastors GQ Magazine has described as “hypepriests” who lead churches frequented by celebrities. Friends and congregants include Justin Bieber and his wife, Hailey Baldwin Bieber, as well as the Jenner sisters.

In fact, the following should cause all Christians to take a pause. This is the article in GQ: Hypepriests: The Grail-Wearing Pastors Who Dress Like Justin Bieber

…Justin Bieber and his favorite pastors have all started wearing the same mega-hyped clothes. What happens when a church becomes a streetwear brand?

…Lentz runs Hillsong, the “cool church” made famous by its famous millennial parishioners including Bieber, Lucky Blue Smith, the Jenner sisters, Hailey Baldwin, and more. When Bieber tagged along with the crew earlier this month at the church’s annual conference in Australia, and as he appeared with Lentz at various clubs, stores, and restaurants over the past weeks, it was nearly impossible not to notice something: if Bieber is taking increasing guidance from his spiritual leaders, he’s taking sartorial lessons from them, too. Or they’re learning from your boy Biebs.

…Either way, Justin Bieber and his pastors are dressing identically. They are having a ball glorying in god. They want to be “better at 70,” which, if I’m being honest, feels like a pretty low bar to clear. (Just be better now! Or at 40!) But what they really want, it seems, is to dress like pop stars on vacation.

…Carl Lentz, styled-up pastor to the stars, wears pieces from the highly coveted Louis Vuitton-Supreme collaboration. He wears what appear to be Kanye affiliate Don C’s customized basketball shorts. He wears those skinny sweatpants with drawstrings so long that I’m not sure how one would avoid peeing on them.

…It appears as if the hipster pastor has evolved. It’s no longer enough to no-comment gay marriage while wearing a biker jacket. Instead, you need to do it while wearing skater socks. Aggressive glasses. Very long drawstrings. Bieber merch. The hipster pastor is dead, and into the void strides someone new. He’s a man god-fearing and Fear of God-wearing in equal measure. Call him The Hypepriest.

…But being a Hypepriest is about more than just looking cool. It is also about marketing. The fact that these guys minister to celebrities—themselves under an increasingly sharp fashion microscope, thanks to paparazzi photographers, gossip outlets, and a host of Instagram-based outfit trackers—

… And if what’s trending is the freedom to wear your own logo across your chest (and down your sleeves, and across the hem of your shorts, and up the sides of your socks), it also follows that the Hypepriest marks an evolutionary high point in branding.

Let’s take a look at the *style* of Lentz. In 2017, this picture was making the rounds on Twitter.  Stock News calls him the World’s Sexiest Preacher. Here he is walking with his former BFF Justin Bieber. I can’t seem to find out why Bieber dumped Lentz but it happened before the current crisis.

11/9/20: I have decided that the photo is so gross that I have removed it. Follow the above link to Stock News. You’ll see what I mean.

Carl Lentz had an affair and got fired, for now…

At first, Brian Houston did not say what Lentz had done. Of course, social media, including People magazine, breathlessly reported his firing. Here is a link to Brian Houston’s email that was sent to the church.

Today Hillsong Church East Coast advised our congregation that we have terminated the employment of Pastor Carl Lentz.

…This action has been taken following ongoing discussions in relation to leadership issues and breaches of trust, plus a recent revelation of moral failures.

…It would not be appropriate for us to go into detail about the events that led to this decision. Our focus at this time is to honor God and pastorally care for our East Coast church community as well as the Lentz family.

In his initial statement, Houston went with the typical *no gossip*  rule. It did not appear he was going to tell the world about the sins of Lentz.

Please understand that it would not be appropriate for us to go into detail about the events that led to this decision. However you can be assured that this decision was made in order to honor God and pastorally care for you, our East Coast family, Pastor Carl and his family.”

Then, Carl Lentz admitted to an affair on Instagram. 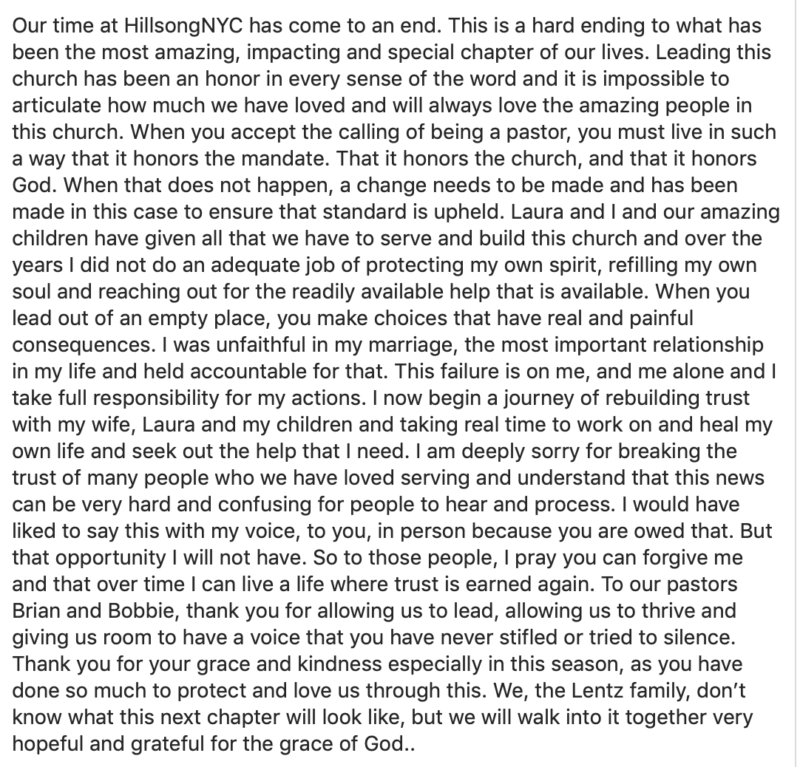 The Daily Mail UK reported that he had an affair with an unidentified podcaster.

Lentz will be back. He’s got the celebrity vote.

Lecrae, responding to the announcement on Christian Post, said:

This means, of course, this is no biggie to Lecrae and friends.  Lentz is a far bigger celebrity and dresses so well. than Lecrae and homage must be paid to our betters in the Christian celebrity world.

Brian Houston had this to say. I think he was hinting that they already know what will happen.

“We thank Pastors Carl and Laura for the way they have served faithfully and sacrificially since the start of Hillsong NYC and for contributing so significantly to the countless lives that have been transformed for Jesus Christ through this ministry,” he added. “They have a heart for people and we are confident that after a time of rest and restoration, God will use Carl in another way outside of Hillsong church. In terminating his tenure, we in no way want to diminish the good work he did here.”