During a November 1, 2020 church service “Catch The Fire Raleigh” church co-pastors Murray and Ash Smith revealed to their congregation that Daniel Chalmers and his wife, Shara, had tendered their resignations on October 27, 2020, and were no longer on staff. Murray Smith seemed a bit “pissed” that the Chalmers had not seen fit to inform church leaders that Daniel was the pastor who had been taken into custody and charged with urinating on Alicia Beverly, a fellow passenger on a Delta Airlines red-eye flight from Las Vegas to Detroit. The flight arrived in Detroit on October 13th. Two weeks later, knowing that the story was going to break and Daniel Chalmers would be named as the “Peeing Pastor” the Chalmers sent an email to the Smiths!

Pastor Murray Smith stated that “They’re (the Chalmers) planning to take a prolonged season of healing, of restoration, of coming out of any ministry. They’re seeking to do that under the leadership of one of their close mentors and we as a church support that decision.”

Really?  The church, by which I gather Smith means the church leadership because he was in the middle of announcing this to the church, supports the decision?  I assume the “restoration” of the Chalmers means that at some point they will be back in their preaching and prophesying “ministry.” One wonders what a guy must do in order to be permanently disqualified for “ministry.”  But hey, this is the world of crazy Charismatics, where it seems anything goes.

A few points concerning the above video. Murray Smith commits the classic sin-leveling maneuver by trotting out the story of the woman caught in adultery from John 8. We all have sin in our hearts, right? So don’t judge or gossip or listen to rumors. But there really aren’t any rumors in this urination incident, are there? Daniel Chalmers was caught with his pants down, so to speak. He admitted to urinating on Alicia Beverly, his blood alcohol was at .175 several hours after the incident, he was charged with a crime and a lawsuit has been filed against him. I think any adult of sound mind can make a judgment that based on these facts, Daniel Chalmers should be permanently disqualified from ministry

“What sorrow awaits you teachers of religious law and you Pharisees. Hypocrites! For you are like whitewashed tombs—beautiful on the outside but filled on the inside with dead people’s bones and all sorts of impurity.” -Matthew 23:27 NLT

Daniel Chalmers is a member of the hypocritical religious class that Christ railed against.

You may have noticed that Pastor Murray Smith failed to mention that Daniel Chalmers was totally “pissed,” as the Brits would say. He was totally plastered, drunk, inebriated. Several hours after Chalmers urinated on Alicia Beverly he was tested for blood-alcohol-content and his test showed a .175! This is more than twice the legally drunk level of .08. Pastor Smith does mention that Chalmers was not on church business, but conveniently fails to mention that Chalmers was on a flight from Las Vegas. I guess what happens in Vegas, stays in Vegas, right Pastor Smith?  You don’t want to be gossiping.

Another item Pastor Smith failed to mention is Chalmers allegedly touched Alicia Beverly in a sexual manner without permission.  Whatever! Minor details, the “church” supports restoration.

And then, of course, note how church leadership attempts to do damage control. They suggest the healthy way to handle this scandal is for those who have questions to go directly to God with them, or church leadership, but to avoid talking to other people.  I suggest the healthy thing to do would be to run from that church as fast as you can! I have seen this act before and it doesn’t end well.

Below is a screenshot of the original statement published by Catch the Fire church. They were quick to mention the perp was a non-Pastor employee, but failed to mention Chalmers by name. I guess maybe that would be gossip?  You will notice I included a comment on the Facebook post by none other than Dee of the Wartburg Watch. There were not many comments expressing any concern for Alicia Beverly. It would appear that the Smiths did take note of what Dee said because when they spoke to their congregation they did a good job of expressing concern and praying for Alicia Beverly. 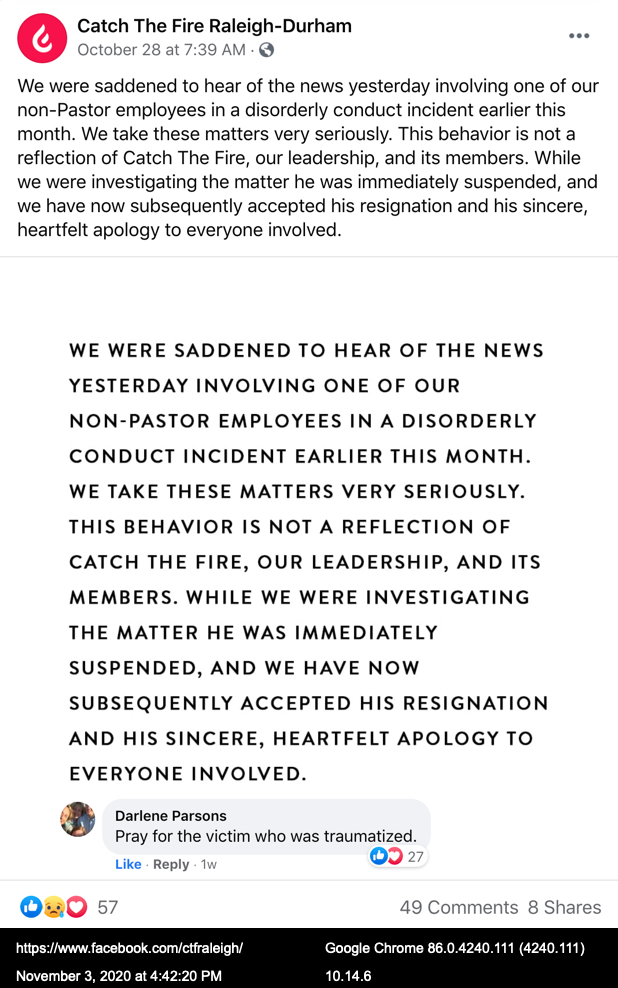 While I don’t question the fact that the Chalmers were not hired as part of the pastoral team at Catch the Fire Church, there is no question that they were involved in some teaching while on staff.  (See the post above.) They also were “preaching and prophesying” at the church prior to being employed. 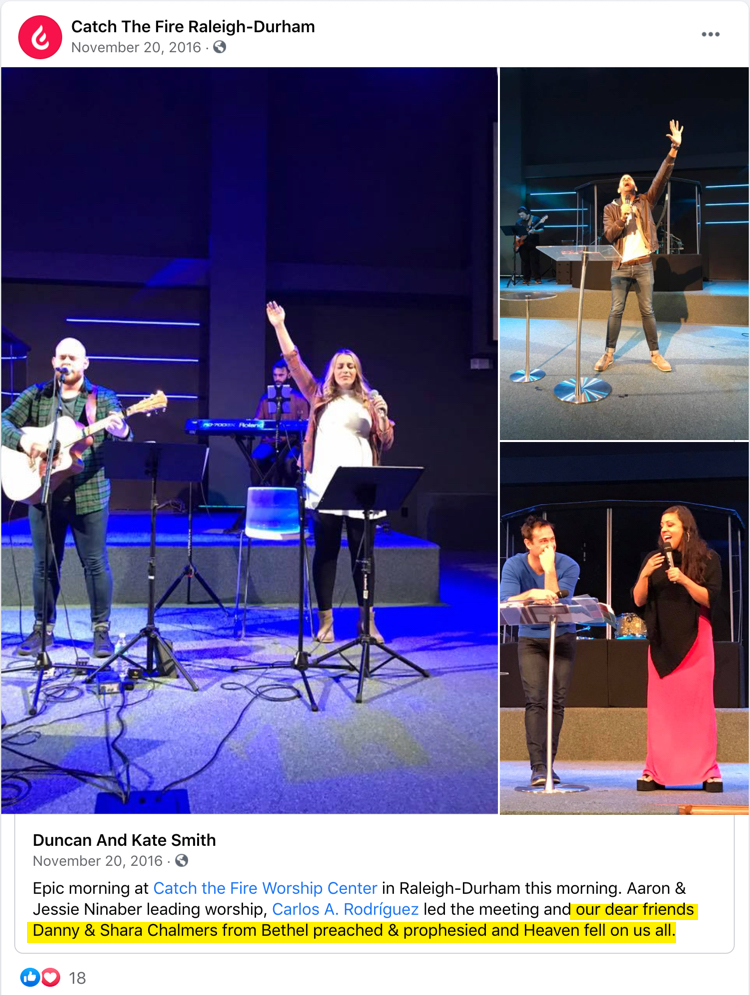 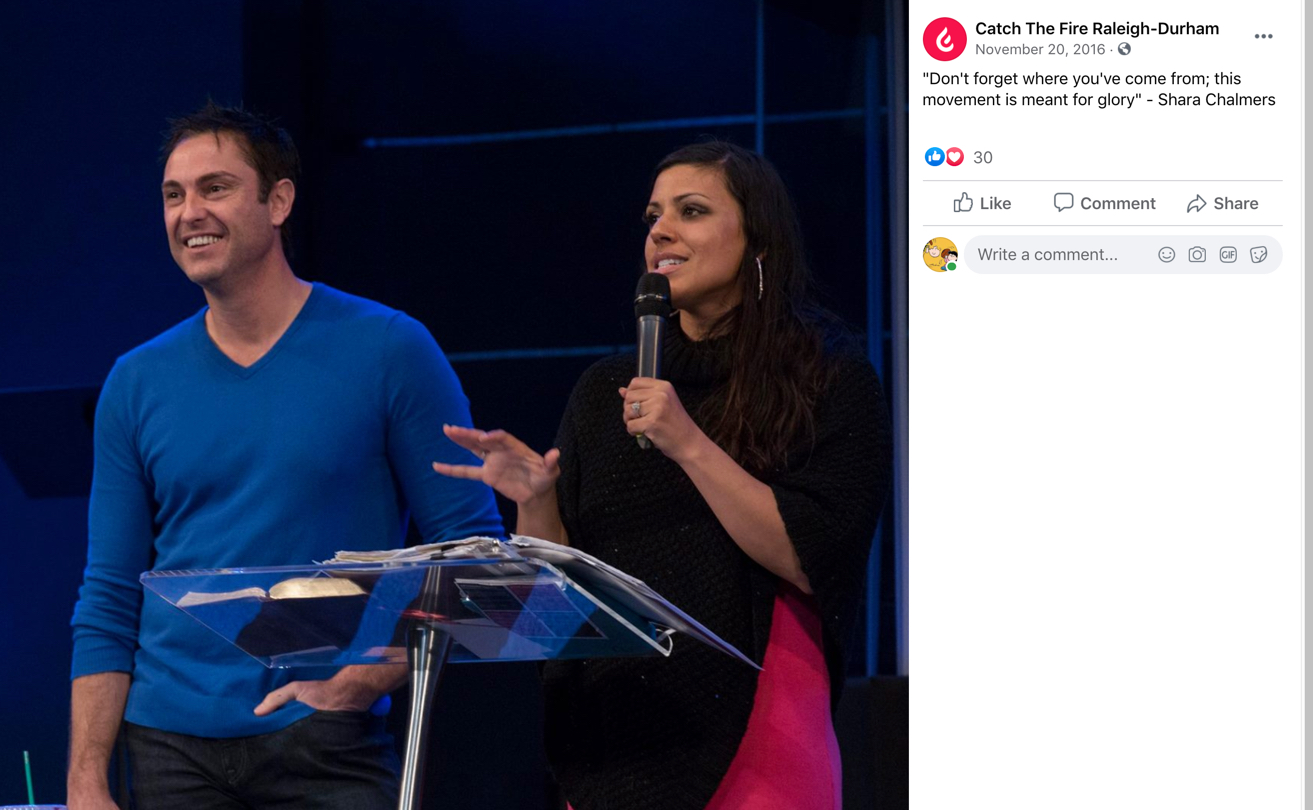 One has to wonder what happened to the spiritual covering the Chalmers had over them. This is an all-star lineup in the crazy Charismatic world. 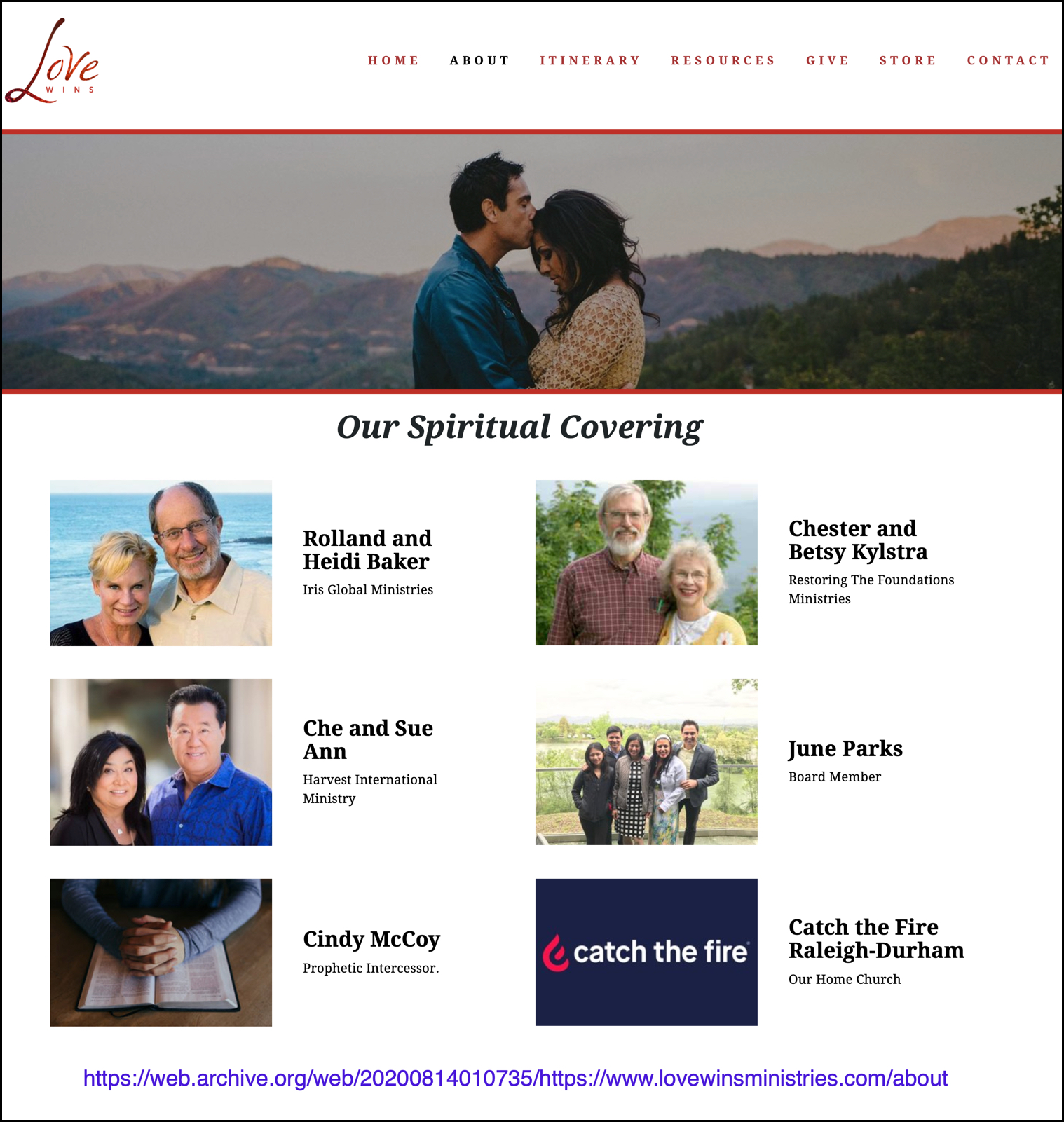 Ever heard of the 7 mountains of society? Me either. I have been out of the Charismatic world since the late ’70’s so I’m not up on all their lingo.  But I think the Chalmers may have participated in some resume padding with the information below. I obtained it from their website “Love Wins” prior to them password protecting it.  Did they actually prophesy over leaders in the White House?   Daniel would probably do a good job acting as the star of Shara’s film, I think his life has been one long act. 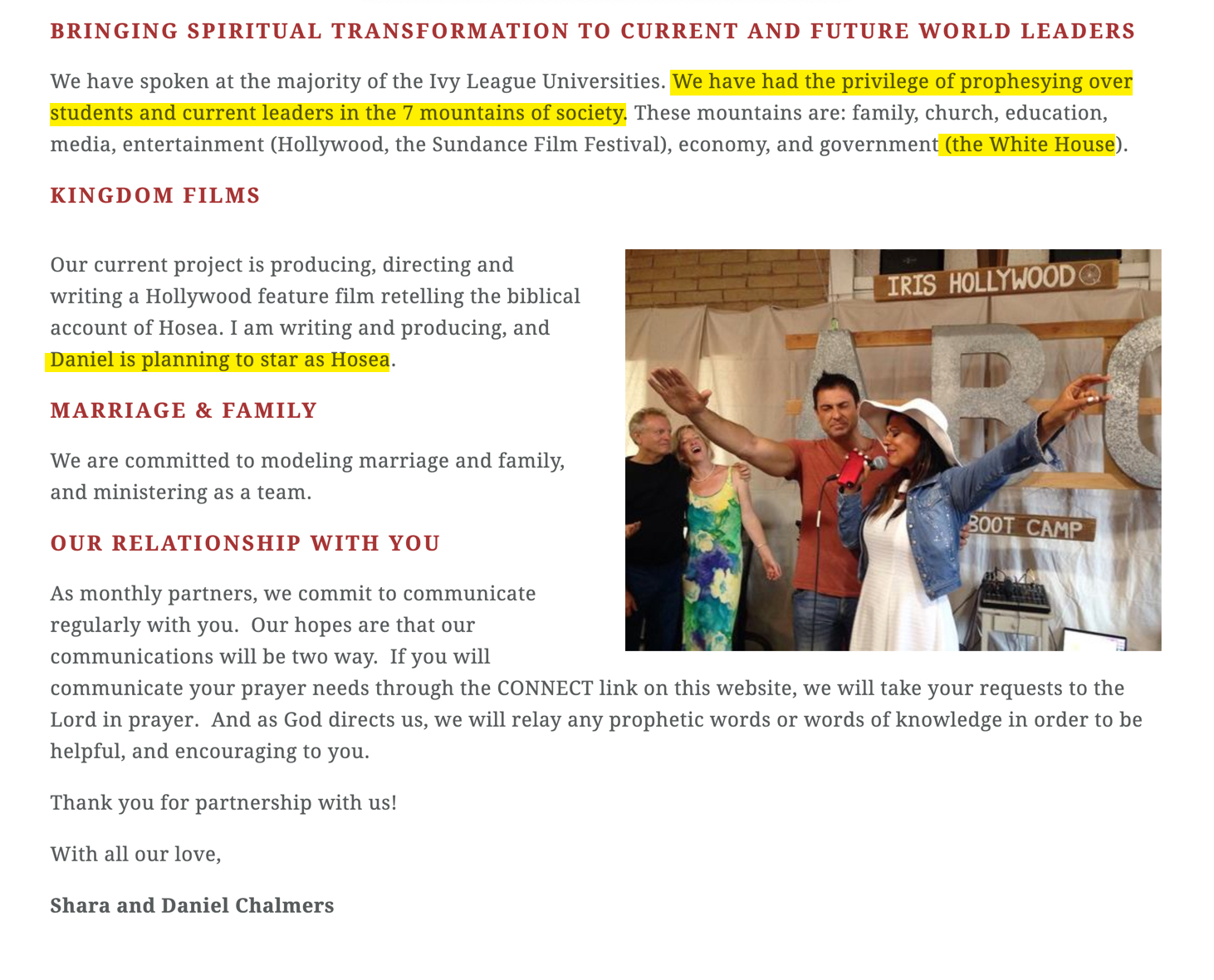 Below is a clip from the Chalmers’ exciting announcement that they would be moving to Catch the Fire Church. This was from the summer of 2018. I clipped a bunch of material out. Have any of you honored your house? Must be another Charismatic thing.

In another expression that I must admit I have never heard, Pastor Ash Smith refers to Jesus Christ as “the oily one!” That is not a typo. I listened to the video and that is what she said. I am unsure whether that is a Charismatic expression or a British thing, but when I hear of “oily” in a religious setting my mind thinks of snake-oil-salesman, which would likely be appropriate for some of these pastors. 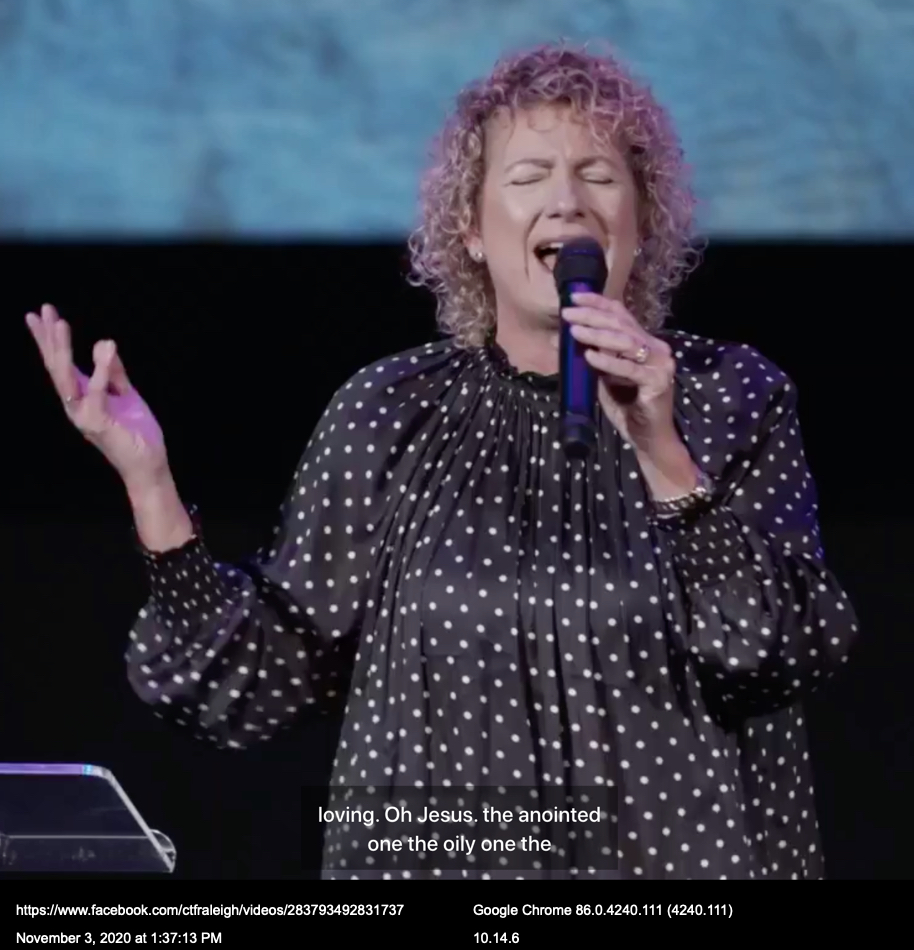 Though I have much more material I could share, I fear I may be losing my readers by now. So just one more thing. Below you will see Pastor Murray Smith declaring/praying/speaking to  Hurricane Dorian not to do any damage in the Bahamas and turn east and move out into the ocean, not touching the USA. I guess his faith was weak because his prayer was a total failure. The Bahamas were ravaged and then the storm moved west and up the coast of the USA. Does anyone in this church dare question the pastors, or would that be gossip?

Note from the editor: A reader questioned where the information came from which stated that Daniel Chalmers touched Alicia Beverly in a sexual manner. I referred the commenter to the screenshot in this article from Fox 2 News. I have now found the actual lawsuit filed and below is a screenshot of the pertinent page. The document can be viewed in its entirety here. 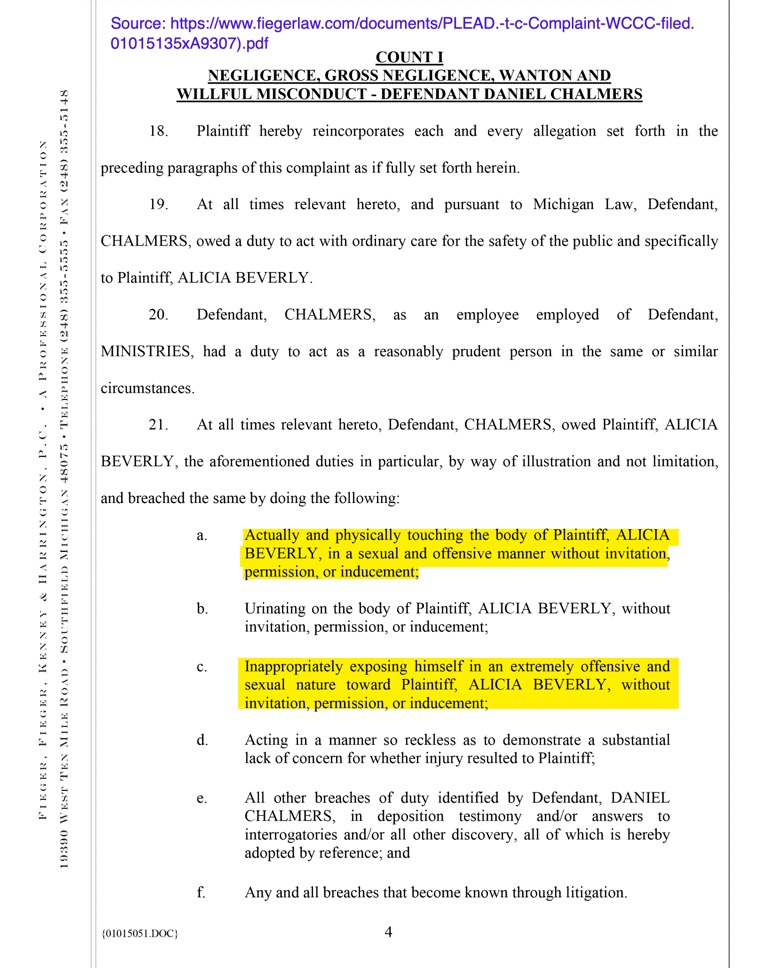