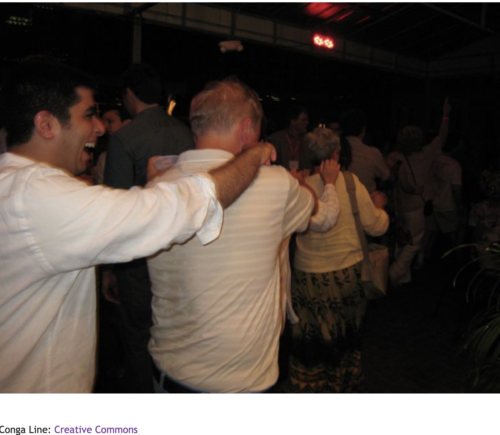 My Conga people will find me anywhere I go.-Gloria Estefan

Andy Savage, Jules Woodson’s confessed molester, is doing what every fallen pastor does when they are removed or have resigned from one church… They start another church. They are excellent examples of the problems inherent in the nondenominational system. I have been a member of a couple of wonderful nondenominational churches(Bent Tree Church is one) that carefully set up their system to reflect typical standards. Those good nondenominational churches are NOT the subject of this post.

Most of these churches are started and led by those we might call *fallen pastors.* These fallen pastors join what I call the *conga line of fallen pastors*…laughing and dancing their way to fame and fortune.

Today, I had a good conversation with Jules Woodson. We discussed the fact that both Conlee and Savage are starting churches in Memphis…* in your face* startups. These actions are quite painful for Jules as well as for many others who supported her during that terrible time. Why couldn’t they have started their churches in another locale? Don’t say they have friends and family there. They could have easily started a church in surrounding areas and still have seen their family. My guess is that they contacted some of their former church members who will return, checkbooks, or Venmo, at the ready. My guess is that the pastors would want Venmo since it is a quick transaction and these boys need money pronto.

Andy Savage’s new church started in October 2019, just before COVID. I’m guessing that he is cash hungry at the moment.

Here is the initial story that would eventually lead to Savage and Conlee stepping down as pastors of the Highpoint Church. In October 2019, I posted Andy Savage, Who Molested Jules Woodson, Is Starting a New Church. The Church Doesn’t Need Him. #churchtoo #metoo

I believe that Savage is disqualified from preaching. When Jules came forward, Highpoint Church was a member of the SBC. They quickly removed themselves from the SBC.

In my post, I shared a link to a sermon that Savage gave at a gathering for those interested in joining his new church. That link is now broken but here are some of my thoughts on that sermon.

Here are some things that I heard.

In this sermon, he showed, once again, why he should not be a pastor.

Savage doesn’t discuss the fact that most youth pastors have never assaulted teens in youth programs.(Although, I’ve recently wonder just how high those stats are.) In fact, few of us have ever assaulted anyone. So don’t try to sin level your molestation onto the backs of the rest of us, Savage.

If one is hoping to find lots of Benjamins in the plate, Collierville is a good choice because it’s a well off community. Here is a description from Wikipedia.

Looks like he’s found a good place to encourage tithing. However, the COVID thing has prevented his church from meeting. If you go to the church website you will find precious little about the church. It appears you have to fill out a contact form to get the lowdown.

If anyone has filled in the contact form and has received material from the church, I would greatly appreciate it if you would share any information with me. Also, we had planned to have a protest outside of the church one Sunday during the meeting time. That plan is still in the works but we will wait until it is safe to do so.

Do not forget that Chris knew of Andy’s molestation of Jules when they started Highpoint together. This means that he has a significant problem with judgment, in my opinion. I wrote a number of posts on Conlee’s interaction with the International House of Prayer. He received prophecies that he was going to do something amazing. I wrote about it in The International House of Prayer: Will Highpoint Church Jump Out of the Frying Pan Into the Fire?

He then claimed that he has been led to start a 24/7 prayer room leading me to wonder if he is going to have his church’s prayer ministry become associated with IHOP Memphis.

Then, after he stepped down from Highpoint, he became an executive pastor of Bethel, Cleveland. Chris Conlee, formerly a co-pastor with Andy Savage, is now an Executive Pastor at Bethel Cleveland which has some fascinating beliefs. Bethel has some rather bizarre beliefs which are outlined in my post. How did Conlee, who helped start HIghpoint which was a member of the SBC and The Gospel Coalition, make such an abrupt turn and join some highly questionable, charismatic groups on steroids, is hard for me to fathom. At one point he claimed he was going to start a leadership coaching business which, given the mess at Highpoint, elicited guffaws from a number of wags on TWW and Twitter.

He has a big, fat GIVE button on his website in case you wish to support his *ministry.* Conlee calls himself a *Visionary Leader* and plans to get busy solving the problem of racism. Since he never spent much time on this in the past, will he do so in his new church? Or is this simply another pastor jumping on the bandwagon until the next *important thing* arises.

Chris’s entrepreneurial spirit enabled him to start the Highpoint Leadership Institute, the LeadershipWorks Conference, and the Healing Wounded History Conference. Every vision is ultimately a solution to a problem. One of the problems Chris is most passionate about solving is racism and all of its related injustices; that’s one of the primary reasons Chris was one of the founding members of the Memphis Christian Pastors Network. Chris also enjoys serving as a Trustee for Lead Like Jesus and teaching for Convene and their Christian CEO Peer Advisory Groups.

He also considers himself a gifted communicator. He likes to present such topics as *overcoming adversity* and  *leadership.* I often wonder about people who have such high views of themselves. I’m wondering if I should call myself *an adorable blogger* as well as a known *daughter of Stan.*(sic)

Oddly, I could not find Conlee’s name mentioned on the Convene website but he is listed at Lead Like Jesus with no affiliations after his name. 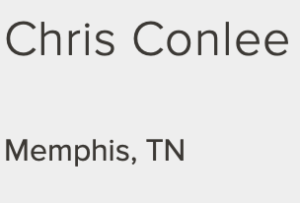 His wife breathlessly published *A Letter to Memphis.* I guess she thinks that the entire city of Memphis has been waiting for this letter.

She wants you to know that Satan is going to be spreading half-truths, etc. I assume she means about Chris.

I do have a little apprehension. I think of the way Satan likes to work. Silence, half-truths and division are three of his favorite weapons. 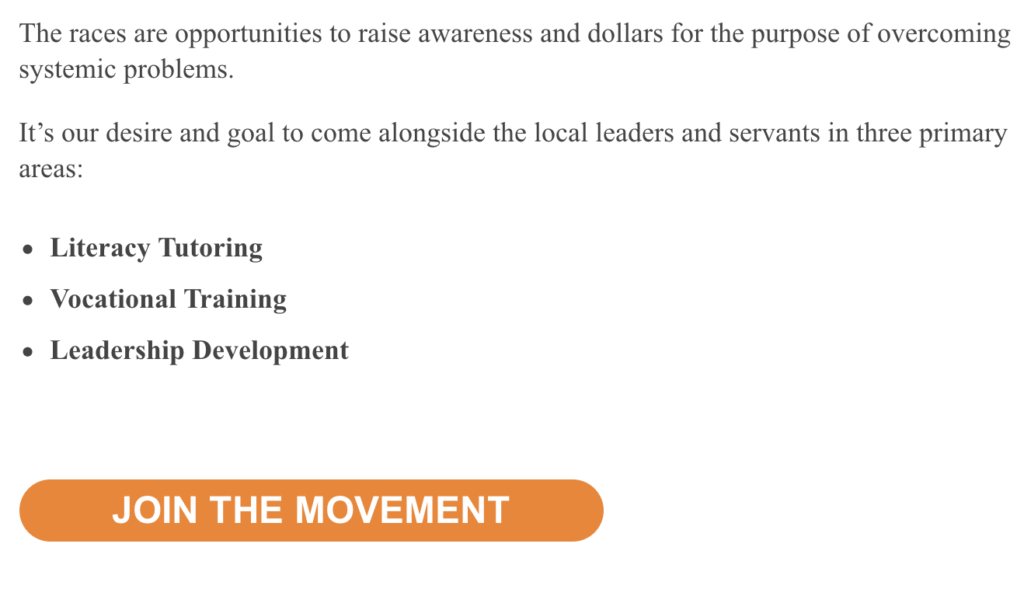 Notice that Conlee is attempting to raise dollars for his new *reconciliation* ministry. He can collect an income from the proceeds of this not-for-profit. As for One City Church, this is next to no information. You must fill out a form to get updates on the church. Once again, I would ask that folks send me any information that they receive.

Cheap grace means grace sold on the market like cheapjacks’ wares. The sacraments, the forgiveness of sin, and the consolations of religion are thrown away at cut prices. Grace is represented as the Church’s inexhaustible treasury, from which she showers blessings with generous hands, without asking questions or fixing limits. Grace without price; grace without cost! The essence of grace, we suppose, is that the account has been paid in advance; and, because it has been paid, everything can be had for nothing. Since the cost was infinite, the possibilities of using and spending it are infinite. What would grace be if it were not cheap?…

Costly grace is the treasure hidden in the field; for the sake of it a man will go and sell all that he has. It is the pearl of great price to buy which the merchant will sell all his goods. It is the kingly rule of Christ, for whose sake a man will pluck out the eye which causes him to stumble; it is the call of Jesus Christ at which the disciple leaves his nets and follows him.

Costly grace is the gospel which must be sought again and again, the gift which must be asked for, the door at which a man must knock.

Dedicated to all of those *conga* dudebros.