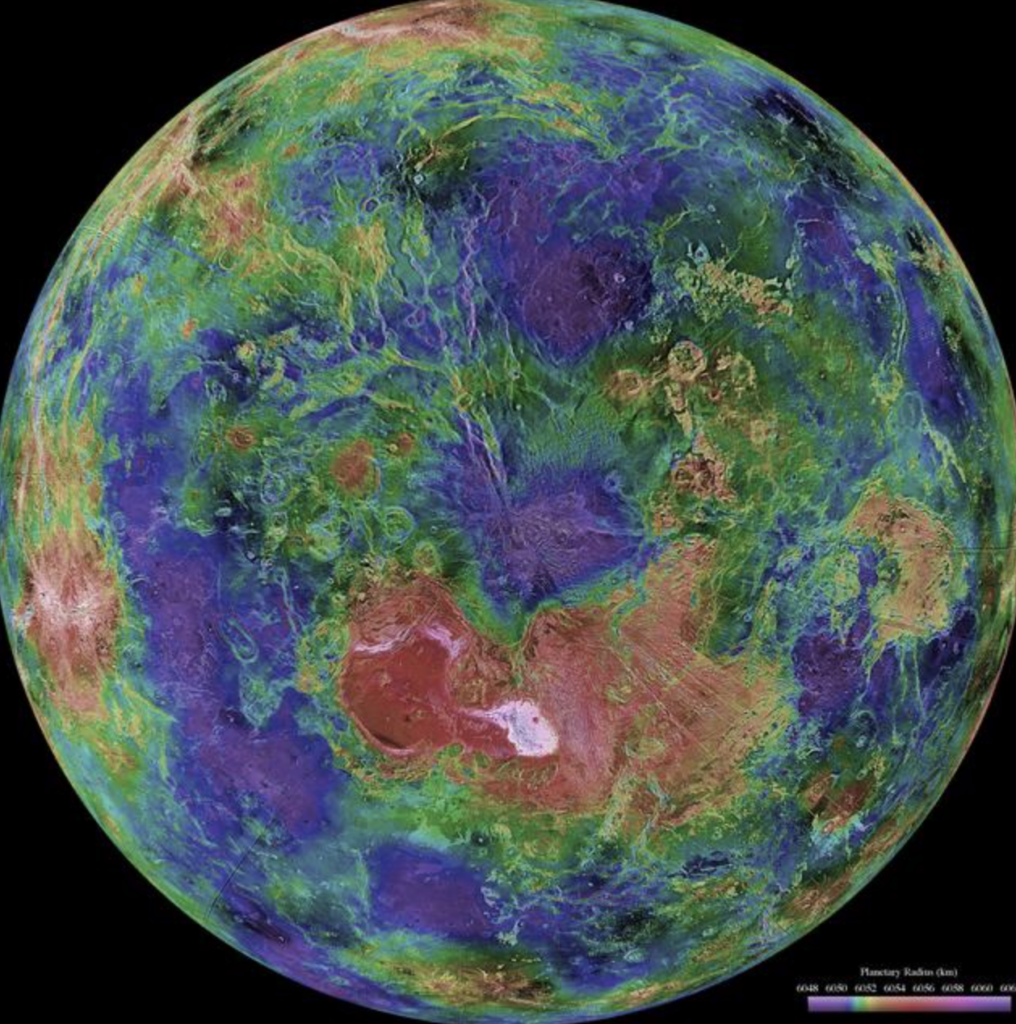 Hemispheric View of Venus Centered at the North Pole

If you tell the truth, you don’t have to remember anything. Mark Twain

Today, I spoke with a former professor of Cedarville University who told me that Dr Tom White is a widely disliked university president. I will say more about that discussion in another post. However, one thing is apparent. Dr White has told many stories about how he came to hire Dr Moore. Some of the narrative about what happened appears to change or become more confusing at each retelling.

I believe that this story is developing hour by hour and I’m having trouble keeping up. This blog post is a *catch up* post. I believe that Dr White’s job is in jeopardy and well it should be.

Todd has taken to making sure some documents land on WayBack just in case individuals start cleaning up their websites.

Read this carefully. It is startling to me, a nurse, that a university president could confuse a paraphilia such as voyeurism with a simple sin (cussing at the guy who cut you off in traffic-you remember traffic, don’t you?)

For those of you university presidents or just plain simple folks like the rest of us who don’t understand that a paraphilia is a profound psychiatric disorder, here is a link to an article by the NIH: Paraphilias: definition, diagnosis and treatment.

Take a look at this chart. Notice that voyeurism  and pedophilia are both on this chart. This means that the person who is afflicted with voyeurism like Moore has a problem that needs expert professional intervention. On other words, folks, a once a week meeting with a pastor is not going to treat the problem. However, Dr White is into the biblical counseling movement which tends to believe everything is curable with prayer and a listening ear. Dr White, along with Paige Patterson, The Village Church and Matt Chandler failed Dr Moore in my opinion., 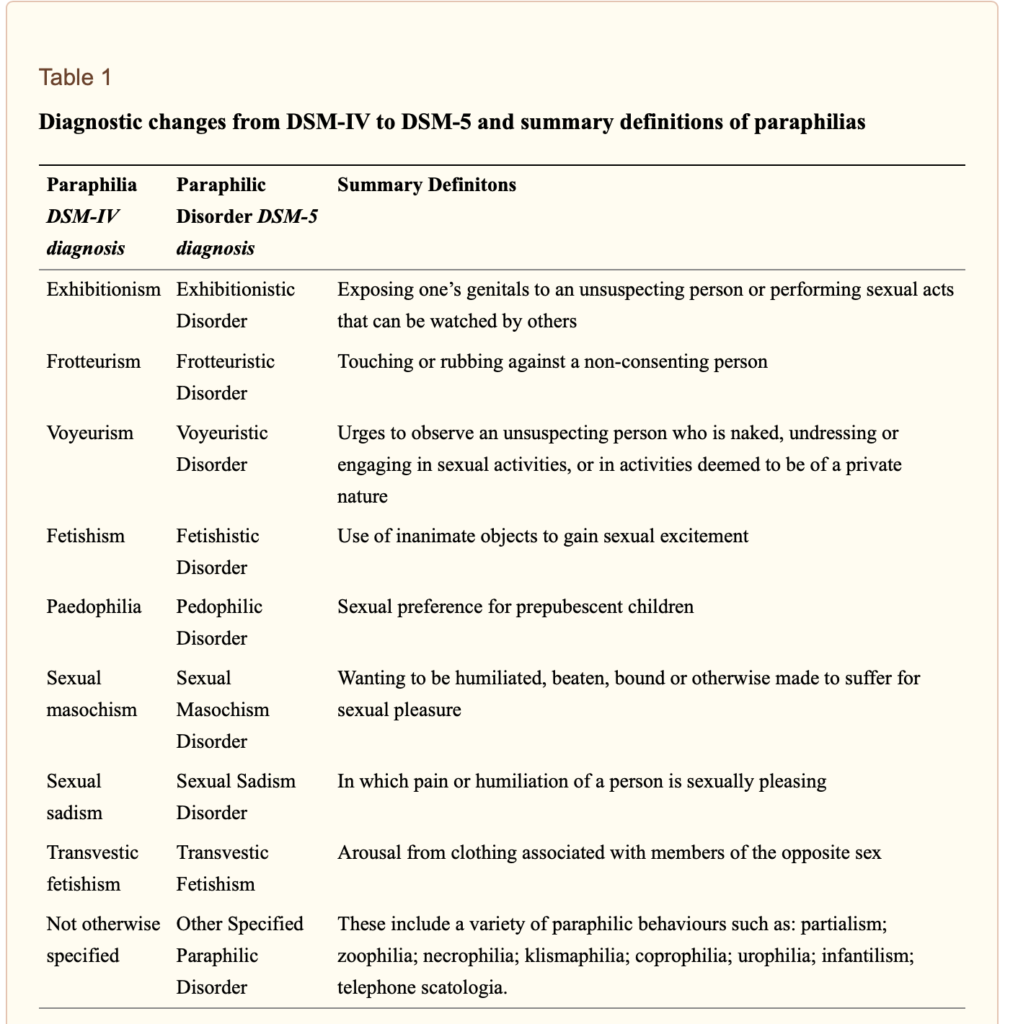 I believe that the actions of these men are an outgrowth of the worrisome *biblical counseling movement.* There will be more on this in another post. I beg people to seek professional help when they are afflicted with one of these paraphilias. A weekly meeting with your pastor will NOT cut it. Here is a post I wrote that lists other posts at TWW on the failure of biblical counseling: Another Reason to Avoid Biblical Counseling: Confidentiality Is Not Guaranteed When Sin™ Is Involved

In the meantime, Dr White outlined his *actions* in his 4/24 post and it has come back to haunt him.

This an an excellent post in which Todd asks some important questions.

Thomas White, in his statement of April 24, 2020 stated: “On April 22, 2020, I learned that I did not have all the information about the original incident. Instead of at most two videos, I heard there were at least five videos. Instead of this being over a short period of time, I heard that these were taken over a period of at least five months.” Whether White knew of two videos or five videos is irrelevant. One video should have been enough to prevent White from hiring his friend, Anthony Moore.

Additionally, Julie Roys, in her article published on April 24, 2020, said: “The elders at TVC Fort Worth said in a statement to me this week that they “thoroughly informed Dr. White and Cedarville University about the details of Anthony’s dismissal and our belief that Anthony was not fit for ministry of any kind.”

Quoting again from White’s April 24, 2020 statement, he said:  “I also heard details of an unhealthy friendship. I confirmed that the two people who counseled with Anthony at Cedarville did not know this information either. If I had known these items at the beginning, I would not have attempted the plan for restoration.”

So, again, White is asking us to believe that if he had known Anthony Moore had taken five secret videos of his good friend and subordinate while he was nude in the shower instead of two secret videos he would not have hired Moore. What if it had been three videos, Dr. White? What if it had been four videos, Dr. White? I’m simply attempting to discern what White’s acceptable level of videos of a nude man in the shower is. I mean, we obviously know two videos or fewer places you within the acceptable level for White to hire you as a reclamation project, while five videos of a nude man in the shower would disqualify you as a Thomas White reclamation project, so I just need to know if a man who has recorded three or four videos is salvageable. 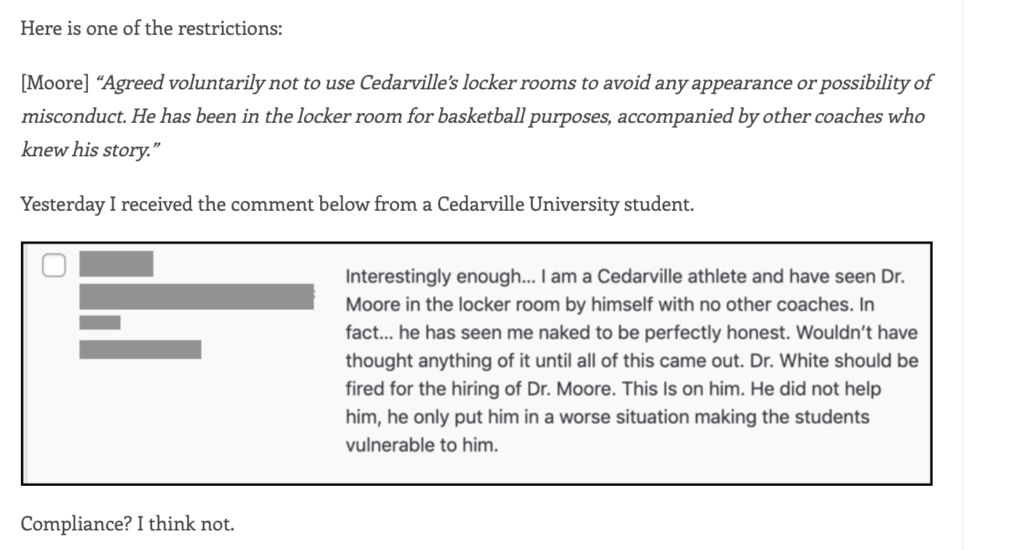 You really need to read the entirety of Todd’s post. There is enough there to get you mad.

Instead of telling the trustees that Moore had been fired from The Village Church for secretly making multiple videos of a youth pastor taking showers, White said Moore “acted in perversion technologically with another person.”

White also said in a recent blog post that according to the five-year restoration plan Cedarville gave Moore, Moore would not teach students during his first year at Cedarville. Yet that’s not what White communicated in the 2017 email to trustees.

Instead, White wrote that Moore would begin teaching online classes during his second semester and “perhaps co-teaching with Jason Lee,” dean of the School of Biblical and Theological Studies.

…White describes Moore in the email as a friend both he and Dr. Lee know “well” from their time at Southwestern Seminary. White served as vice president of communications and student life at Southwestern from 2006—2013 and Lee served as chair of the church history department. Moore got his PhD from Southwestern and Lee was Moore’s PhD supervisor. (Ed Note: White worked for Paige Patterson and this will come back in the near future in a post I plan to write about a student during that time)

I find this following quote from Julie’s post fascinating…Why won’t either party, The Village Church or White, release the letter?

However, the elders at The Village Church Fort Worth last week told me that they “thoroughly informed Dr. White and Cedarville University about the details of Anthony’s dismissal and our belief that Anthony was not fit for ministry of any kind.”

Is there more going on here? Is there a tie between The Village Church/Matt Chandler and Cedarville? Todd will deal with that tonight! I bet you know the answer to those questions.