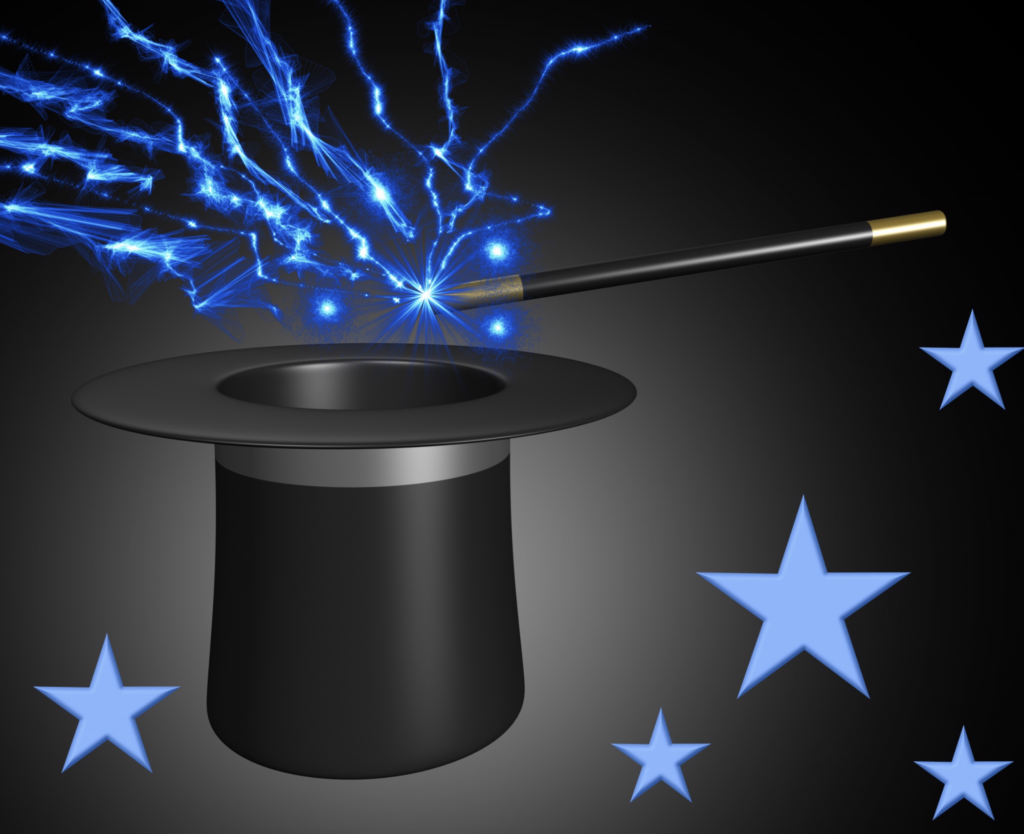 Magic or an Illusion.

“How does he do that?…Pan the camera 45 degrees.”  David Copperfield

I recently told my family that I would like, just once before I die, to find out that a really cool conspiracy theory was true. For example, once and for all, I would love to know that there really was an encounter with an alien space ship even if it couldn’t be explained.

Much of life is actually explainable. I am driven nuts by people who use their Facebook to pitch stories that police are warning about “thieves lie in wait under victims’ cars, then render their victims helpless by slashing their ankles.” Except, it they took half a minute to check the story out, they would find it isn’t true.

This morning, I reviewed the news as I usually do and came across two stories that made me shake my head.

The unfounded claims about 5G spreading across social media appear to be contributing to real-world attacks on cellphone towers in the United Kingdom.

Four of Vodaphone’s towers were attacked in this past weekend, according to the multinational telecommunications company. This comes after several cell towers across Britain recently were set on fire. They weren’t necessarily delivering 5G.

In fact, a woman gave some workmen a hard time, saying that 5G is killing people.

This is the consequence of those bonkers Facebook conspiracy theories about 5G. Key workers getting harassed on the street. pic.twitter.com/5z35r6sabp

No, it just isn’t in the UK. Apparently there are Christians in the US who are buying into this nonsense as well. 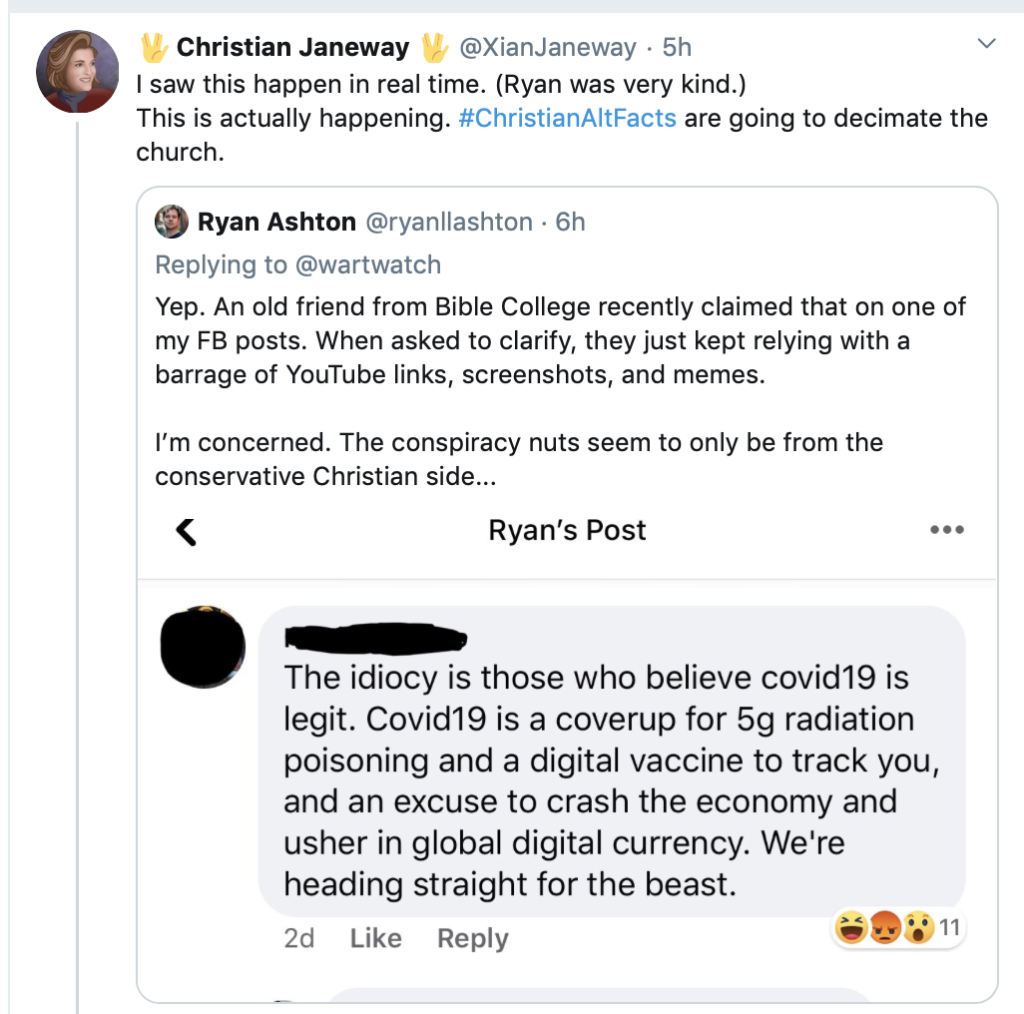 No one was injured and the ship, sent to bolster the health care system during the coronavirus outbreak, was not damaged. The man told the authorities he had suspicions about the ship’s reason for docking.

Those unfounded suspicions bubbled over on Tuesday when Mr. Moreno, at the end of his shift, sent a train off its tracks at full speed and crashed it some 250 yards away from the Mercy,

Some reports said that he believed the ship was part of a conspiracy to spread the coronavirus in order to takeover the government.

Tutorial on Magic for Naive Christians: It’s Just an Illusion!

Four years ago I wrote the following posts. I have updated a few links so you can watch the magic if you wish.

This is when it is fun to have a blog. I get to indulge myself a bit. Ever since I was a little girl, I have enjoyed magic tricks and illusionists. I used to buy those little kits to “amaze my friends” with card tricks and disappearing quarters.

He also made the Statue of Liberty “disappear.”

At this moment, (2016) I am enjoying a young man on America’s Got Talent who does simple tricks in a unique manner.

There is another illusionist on that program who I will get to in a moment.

Back in the pre-computer days, one had to buy books and magazines to figure out how illusionists accomplished their feats. Today, it is quite simple-go to You Tube. I used to assume that everyone, except small children, understood that the so-called magic acts, as seen in shows, are simply illusions performed by talented artists. But not so, especially in the gullible sectors of the Christian community.

Many Christians are downright credulous.  They hear the word “magic” and immediately think of the “powers of darkness.” If I hear about the witch of Endor one more time, I will scream.  How many of you remember Mike Warnke? I am dating myself here. In the 1970s, Warnke claimed to be a high priest of Satan who converted to Christianity. He soon was making bank, appearing at churches and conferences. The Christian community made such a celebrity of him that he appeared on ABC’s 20/20. Wikipedia gives a good overview of Warnke here.

In 1973, Warnke’s book The Satan Seller was released. Written by Warnke, with help from Balsiger and Les Jones, the book tells of Warnke being orphaned as a child and his introduction into Satanism. Further detailed is Warnke’s participation in sexual orgies, alcoholism, and drug dealing; his rise in the ranks of Satanism to the level of “high priest”; presiding over Satanic rituals including magical spells, summoning demons, ritual sex including a ritual kidnap and rape; the attempt on his life — a heroin overdose — that left him angry and disillusioned; his heroism in Vietnam; and how he found Jesus and came home as an evangelist. The story ends with Warnke living happily in California with wife Sue Studer. In fewer than three months after the release, The Satan Seller had become a religious best-seller.

Cornerstone magazine did an investigation and revealed him to be a fraud in the 1990s. Amazingly, he is still invited to speak by some Christian groups who just can’t let go. He sure can spin a tale. He apparently is now also billed as a Christian comedian.

Proctor and Gamble “worships the devil.”

How many of you remember this scandal?  Proctor and Gamble was forced to initiate lawsuits to counter this claim that ran rampant in the Christian community. Here is one infamous recording that was submitted to the courts, allegedly made by an Amway distributor. Amway is deeply embedded in today’s churches. This rumor spread throughout the United States, causing Proctor and Gamble no end of headaches.

The President of Procter & Gamble appeared on the Phil Donahue Show on March 1, 1994. He announced that due to the openness of our society, he was coming out of the closet about his association with the church of Satan. He stated that a large portion of his profits from Procter & Gamble Products goes to support this satanic church. When asked by Donahue if stating this on t.v. would hurt his business, he replied, “THERE ARE NOT ENOUGH CHRISTIANS IN THE UNITED STATES TO MAKE A DIFFERENCE.”

In March 2007, Procter & Gamble was awarded $19 million in its lawsuit against four Amway distributors for disseminating rumors tying the company to Satanism.

I attended a woman’s Bible study in which a woman claimed that the Proctor and Gamble president had made the above claim. I couldn’t take it. I asked her point blank if she had seen the show. She claimed “a friend” did. I told her that her friend was not telling the truth. To top it off, a pastor in that church sent an email out claiming the same thing. I told him he better retract it or get ready to spend lots of time in a court since P&G was actively suing people who were spreading those rumors after they had asked them to stop doing so.

A simple (but clever) magic trick cause a Christian Post writer to claim that this was a a paranormal event that could possibly cause you to go to hell for simply enjoying the illusion.

Some years ago, a local church had a Christian illusionist provide an evening of entertainment for its members. There was an uproar as some members proclaimed that the church was allowing witchcraft to be practiced. This was the first time I had heard of Christians who got upset over simple illusions. Apparently, these poor souls believed that these were not mere tricks. Sadly, some still do.

Today,(2016) I read an op ed piece on The Christian Post that made my jaw drop. The Illusion That Seduces and Bewitches Magicians was written by Dan Delzell who is listed as a CP exclusive columnist.

He commented on a trick that I had already seen and knew how it was accomplished. But he said:

I had never heard of the magician, Dynamo, until I read about how he floated alongside a double-decker bus in London recently. I watched the video. Personally, I think it was legit. I believe this was a paranormal event and an authentic example of levitation. But it’s not like this sort of thing is completely unheard of today.

So, this columnist makes the claim that this was a paranormal event! He calls it “legit.” He then ends a lengthy tirade against the supposed dark arts and suggests that you will not go to heaven for “floating next to a bus.” You cannot make this stuff up!

It turns out much better when you trust in Jesus than when you live life obsessed with magic. So don’t fall for the illusion. Don’t be seduced by the power, even though the power is very real and alluring. If those evil spirits could levitate your soul to heaven for eternity, they would be worshipping the Creator rather than tempting people to dabble with the counterfeit practices of the occult.

So would you rather float next to a big bus for a few minutes, or live in paradise forever? Both of them require supernatural power. But only one of them will bring perfect contentment to your soul and rapturous joy to your entire being throughout eternity. Hmm. Let’s see. That’s a tough one. Temporary bus floater, or eternal resident of heaven? Is this a trick question?

Let’s take a look at the video in question.

So, is Dynamo on a fast track to hell because he practices the dark arts? Oh good night! When a friend sent me the original video, I simply did a You Tube search for an explanation and found one just below the original video.The question is “Why didn’t Delzell do the same?”

So, did Delzell apologize for his histrionics? He wrote another post Christian Illusionists Have a Spirit Within Them. The answer is “no.” He sides steps his original post and commends “Christian” magicians while never acknowledging his epic fail in the discernment arena. Delzell should fall on his sword.

Christians have no excuse for passing on rumors and lies. We are blessed to have resources at our finger tips. They are called Google, Snopes, You Tube and many others. The next time something sounds bit fantastic, do some research.

The Christian Post link, perhaps responding to pushback on Delzell’s paranormal prognostication, published a story explaining how the trick was done. They should have apologized for the original post. Why do Christians, who screw up in public life, have such a hard time saying they ware wrong? Here is the closest they got.

However, it now appears as though the method behind the levitating magic trick has been revealed.

I leave you with a trick that was recently performed on America’s Got Talent. Note how the performer, Special Head, sucks you into some sort of Far Eastern mysticism shtick to get you to buy into his illusion.

Here is the explanation on You Tube

C’mon guys. It’s all simply an illusion. Before spouting off conspiracy theories and discussing the *dark arts*  (Good night!) do your research. It’s easy to do. When you don’t, you come off sounding stupid and looking lazy. Perhaps you are looking for a way to control your environment. It isn’t a sudden virus; it’s a government conspiracy and we can manage that by exposing it. It is far harder to make a real virus go away. Look to the Father for the source of your peace and to magicians to make you smile. Conspiracy theories always let you down in the end.