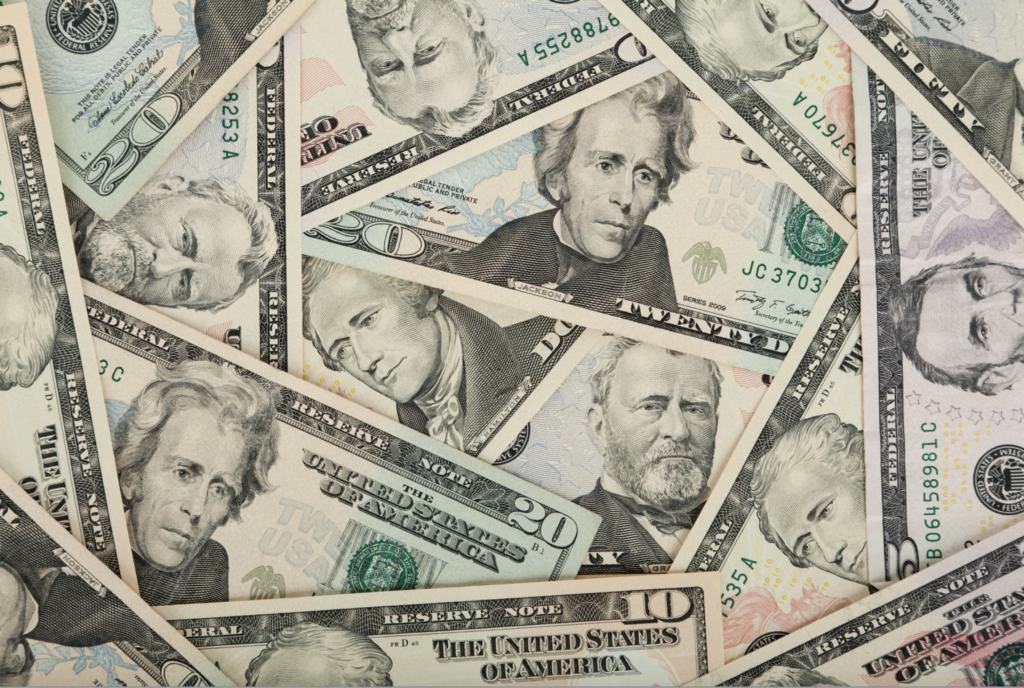 Todd Wilhelm, Thou Art the Man, was the one who found out all of the information found in this post. TWW has often commented that there is lots of money in the conference circuit. Todd has given us the beginning of an insight into a lucrative business that is T4G. While reading, keep the following in mind.

Todd first wrote “T4G – When Will the Evangelical Leaders Cancel Their Gospelly Conference?”

“I fully expect the T4G Gospelly boys to announce they are cancelling their conference any day now, but it’s rather shameful that the Governor of Kentucky may have to threaten the leaders with house arrest if they refuse to do so!”  This morning Mark Dever and Matt Schmucker published a statement and a video in which Dever said, “Government officials have informed us that we can no longer gather for the Together for the Gospel Conference.” Schmucker, not quite as forthright in his written explanation as Dever was in the video, stated: “our love for neighbor and submission to authority overrides even our desire to gather, hear good preaching, sing, and collect books.”  Call me skeptical, but if one realizes that above all, these guys are peddlers of the Gospel their actions become much clearer.

Todd then predicted the following:

Two days ago I also stated: “Watch for them to ask those who have paid the $300 conference fee to donate it to T4G.  And watch their “partners in the gospel” do it!” Again, I am a rather simple-minded man, but a child of three could have figured this out. If you have followed T4G over the years you know that the crowd queuing up to plunk their hard-earned cash down for a seat in the KFC Yum! Center in Louisville is comprised of overwhelmingly winsome white men in their 20-30s. They idolize preachers like John MacArthur and C.J. Mahaney (neither were scheduled to speak this year), talks about church discipline, church membership contracts, and all things Calvin.

John MacArthur at the 2016 T4G conference, surrounded by his worshippers.

So what happened when the conference was finally cancelled out of *love for our neighbor?* (Somehow, I have a feeling it had nothing to do with love for neighbor and e everything to do with government guidelines.) The leader dudes applied the pressure and said that T4G would not be able to survive without the conferees letting T4G to keep their money. (They sure as heck wouldn’t be able to pay Schmucker $200,000+)

Todd wrote Wilberforce Weekend Demonstrates it Doesn’t Have to be All About the Money!and explored what happened. 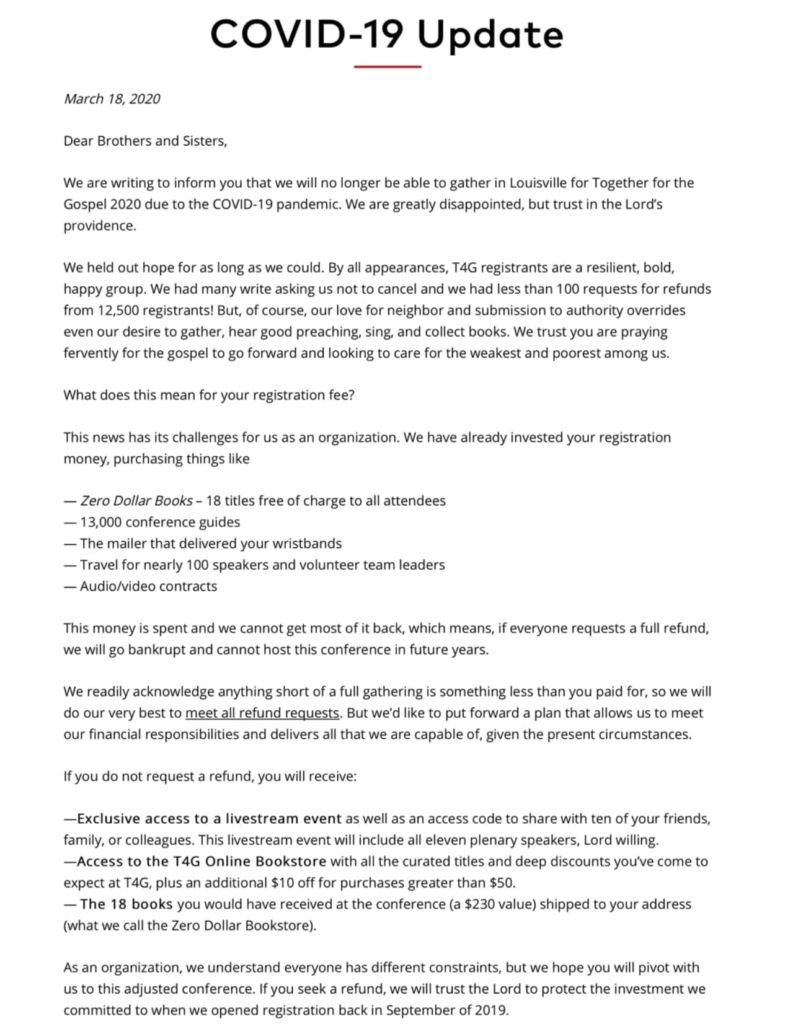 Todd observed that the money sent in for registration was already spent, not invested.

You can go to his post and listen to Dever and Schmucker tap dance in trying to explain why they are broke unless you let them keep your money.

“We’ve taken your money that you have given us since September and have already invested it… So we’ve invested all this money, in one sense we don’t have it anymore, and the expenses still remain and we are completely relying on the registration money and our sponsor money. So the remaining expenses have to be paid, about ninety percent of it, from the registration money.”  -Matt Schmucker

Not exactly Matt. The definition of invest is “to use your money with the goal of making a profit from it, for example by buying property or buying stock in a company,” I’m no business expert, but it appears to me that what you, according to Mark Dever’s quote below, have been engaging in for several years, is a sketchy business practice. As the President and Executive Director of “Gospel Projects” (the umbrella non-profit group for T4G, Cross For the Nations, and The Front Porch), Conference-goers are paying your yearly salary of $250,000, while Mark Dever, a Vice President of “Gospel Projects” receives $25,000 per year for his 2 hours per week he spends working for the non-profit. (That works out to $240 per hour if Dever works 52 weeks in the year. Not bad money if you can get it!)

Maybe Dever is right. Common sense tells me otherwise, but I would like to hear what an individual with a Masters in Business Administration has to say. Dever is a sharp guy, but I believe his specialty is theology, not business. Schmucker’s and Dever’s plans worked in normal times, but in the history of the world, times are not normal indefinitely. Pandemics happen. Natural disasters happen. War happens. Economic collapse happens.

What concerns me is that all of the money was spent prior to the conference. This means that there was not money to continue to support Schmucker’s T4G salary which is rather decent: $250,000 . How many people paying to this conference make that much money? Maybe that’s why some people call if T$G. So, now they are hoping to get the conferees to not ask for their refund back.

Did you know that one of the main reasons for the conference is to give out those 18 books?

“That’s one of the main reasons we have this conference, to get out those books! That’s the main thing, honestly, we do with your money.” -Mark Dever

But, sending out those books costs money and once again, they are reduced to begging for money.

Todd has a suggestion:

Really? Then I have a suggestion. Why don’t you stop holding conferences and set up a massive book club? You could work with publishers to feature one book per month at an unbeatable price.

I think Schmucker’s plan to mail the books that were going to be given away to all Conference attenders is a generous offer, but perhaps not a wise business decision. If they were to mail out 12,000 boxes of books at $20 per box, total cost, they would spend $240,000. That is nearly equal to Schmucker’s yearly salary!  “Gospel Projects” is desperately attempting to stave off bankruptcy by convincing people not to demand a refund and then they turn around and promise to send books to everyone.  They have stated the postage for this will be $12.50-$17.00, but all those books will need to be packaged and addressed. I can’t imagine what the cost of that will be. At any rate, it will really cut into their profit margin.  I have seen that on the T4G Twitter account they are really encouraging people to donate money to them to cover the shipping expense, and as you can see below, one winsome man encouraged everyone to donate $20.

T$G is functioning under the umbrella of an organization called Gospel Projects.

As I have already stated, T4G is an entity operating under an umbrella 501(c)3 non-profit organization called “Gospel Projects.” There are two other entities also operating under Gospel Projects – “Cross for the Nations” and “The Front Porch.” I believe Cross for the Nations is spearheaded by David Platt and John Piper. They have an annual conference held around New Years Day. They make emotional pleas to college students to live “Radical” lives by becoming missionaries.

The Front Porch is a group that appeals mainly to African Americans and is headed by Thabiti Anyabwile. 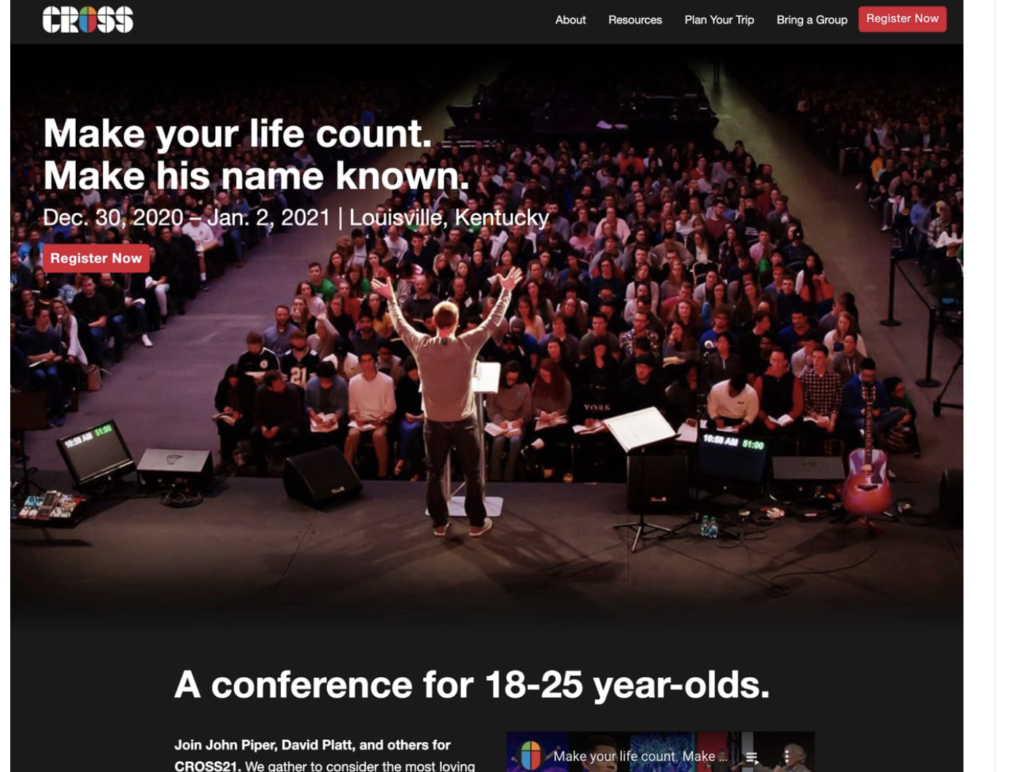 Below is a screenshot from the 2016 tax return of the Gospel Project. Highlighted in yellow are the three entities I mentioned above. It is interesting to read their stats.

This Gospel Project board is quite involved with one another and appear to approve all sorts of money to their BFFs. Remember, folks, they are using your money to pay for the conference and to give each other some $$$. Hence the moniker T$G.

Here is their Form 990 which shows the money earned by Dever and Schmucker. 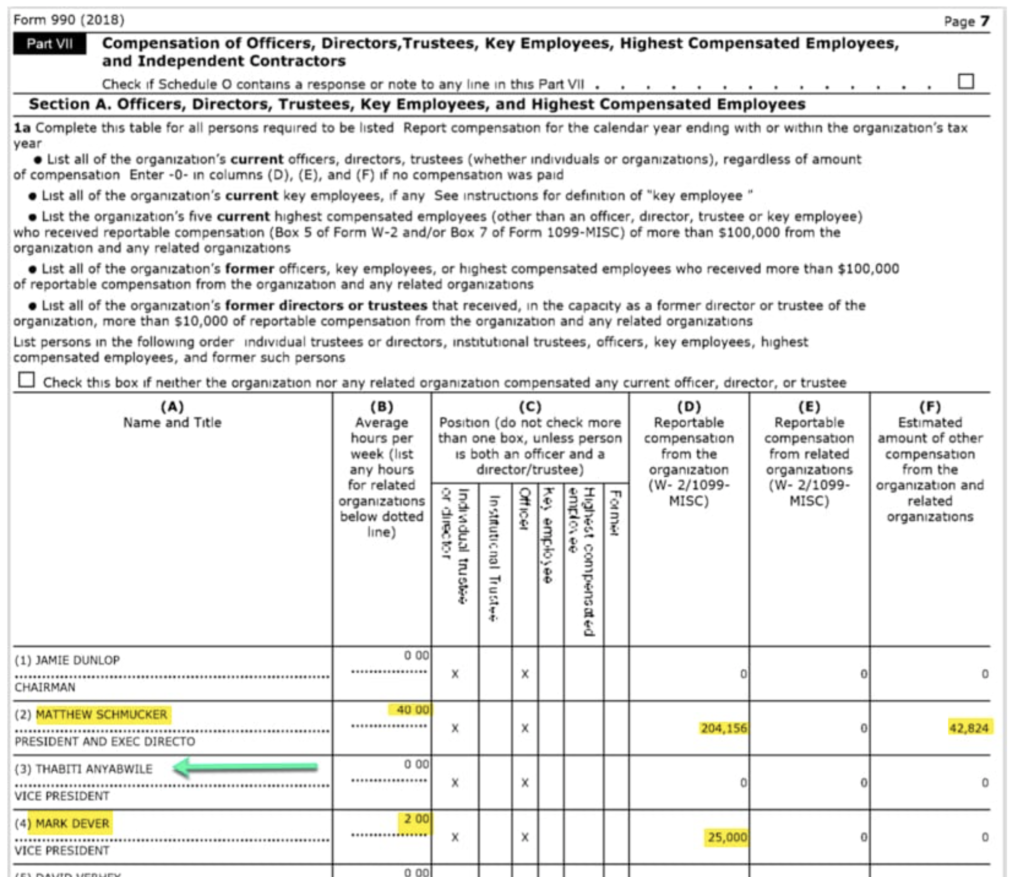 Who serves on the board besides Schmucker, Anyabwile, and Dever?

Jamie Dunlop is an associate pastor at Capitol Hill Baptist Church and is the Chairman of the Gospel Project.

David Verhey is the Secretary. Verhey is a prominent attorney in the Washington, D.C. area and has been an elder at Capitol Hill Baptist Church and then Del Rey Baptist Church in Alexandria, VA.

Finally the Treasurer is Matthew Freeman. He’s an investment advisor and is a member of Mark Dever’s Capitol Hill Baptist Church.

This board appears tight and tied up and of course they approved giving $62,000 to Anyabwile’s church.

Is there are conflict of interest on this board?

Seems so to me but what do I know…

How much money are they paying the conference speakers who are all friends off The Gospel Project.

Below is a copy of the 2018 IRS 990 tax return filed by Gospel Projects.  If you find it hard to view you can click on the link and read the document at the Scribd website. What I was unable to determine, and would really like to know is how much money the Celebrity Christian speakers who appear at the T4G conference receive. If anyone has that information I would love to hear from them.

Here is their tax return from 2018 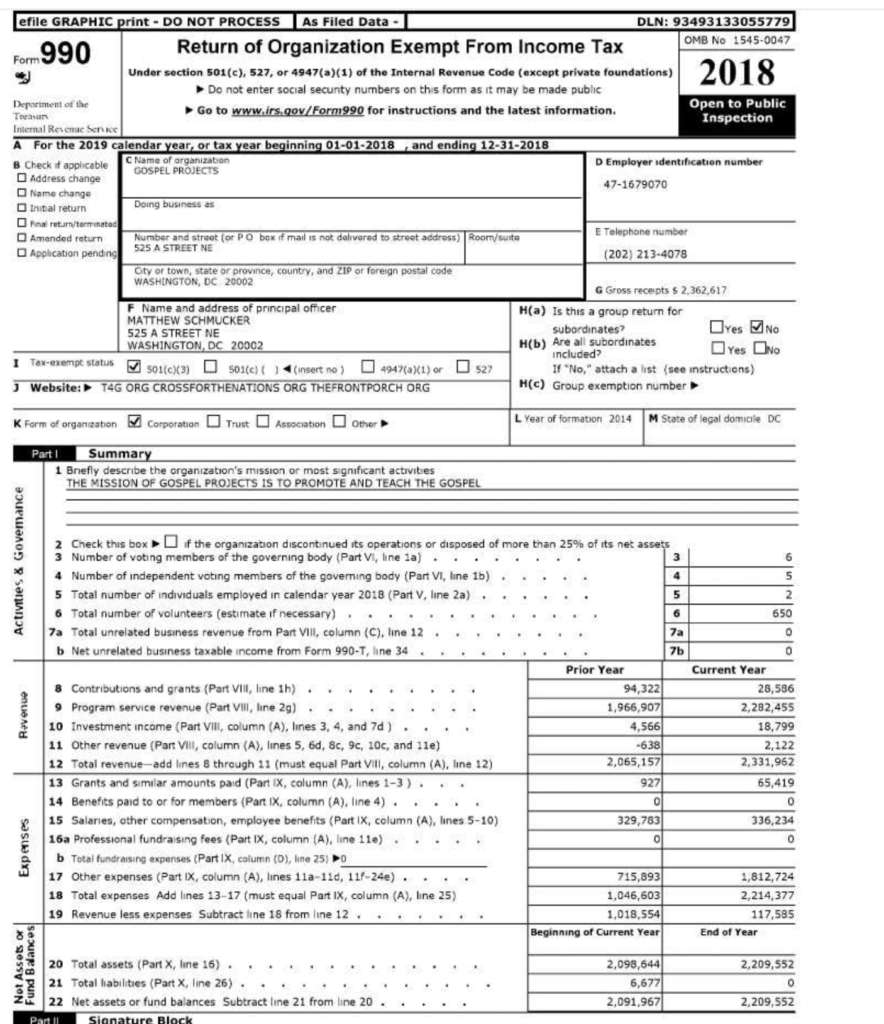 If you have trouble viewing it, here is the link to it on SCRIB: 2018 IRS990 Tax Return by … by Todd Wilhelm on Scribd

In the meantime, the Wilberforce Weekend is not about the money like T$G. 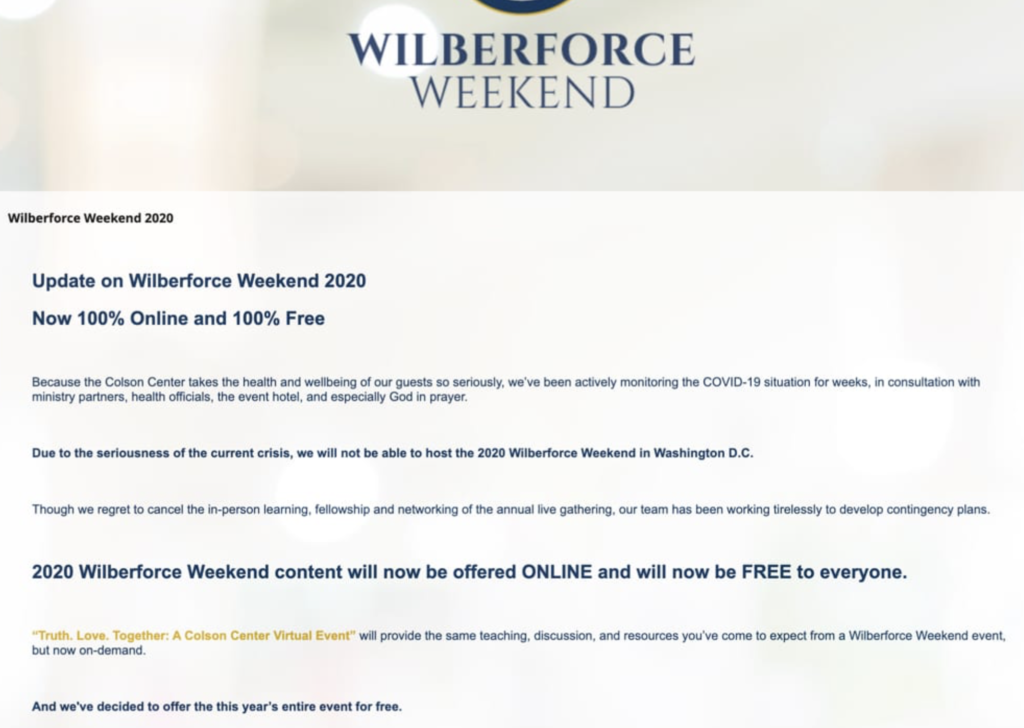 So I have questions.

Putting on conferences appears to be a way for pastors and their buddies to extract money from the masses while rewarding some members of the inner circles. But maybe I’m wrong. Perhaps all of us should make sure we know where our money is going. I wonder if some lowly pastor from a small congregation would like his money going to support the comfortable lifestyle of the Board of T4G?