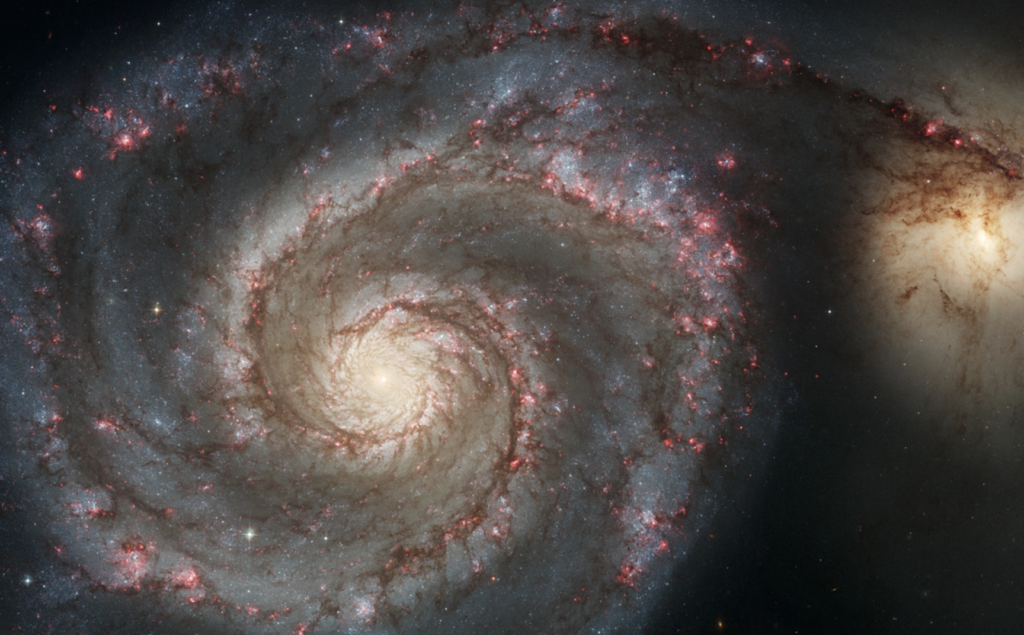 Out of this whirl: The Whirlpool Galaxy (M51) and companion galaxy. ESA Hubble

“Faithless is he that says farewell when the road darkens.” — Gimli, The Fellowship of the Ring

I have long been aware of Wade’s views on women and the church. I have been waiting for him to make the first move regarding his thoughts and his practices at Emmanuel Enid. There is no question that he will be challenged by some in the SBC. In fact, it has already happened and I will be posting on that as well.

Years ago, Wade gave me permission to reprint any of his posts from his website. I am grateful for his views on women and his willingness to move this issue forward within the SBC. His viewpoint expressed here is not new for him. He has been consistent in his belief that women, as well as men, who are gifted can serve on the Leadership Council and also preach on Sundays.

(ed. note) I have not reprinted the entire post since I want to direct your attention to how Emmanuel Enid, an SBC Church, deals directly with the oft discussed gender roles. 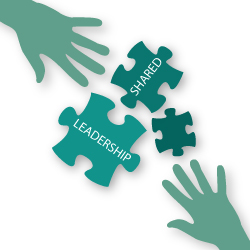 …In this post, I wish to show you how an evangelical church affiliated with the SBC thrives under gifted shared servant/leadership of both males and females.

Jesus taught His disciples that they were not to ask questions about “who is in charge.” We are to inquire “how may I serve.” For nearly a quarter of a century, I have been cautioning Southern Baptists that the major issue in our Convention revolves around “authority”– men have it, especially men in “the office of the authority of pastor” and women don’t.

The great crisis in American evangelicalism today is male infatuation with authoritarianism in the home and church.

Back in 1998, the Baptist Messenger, our state Baptist paper, published the following letter from me: 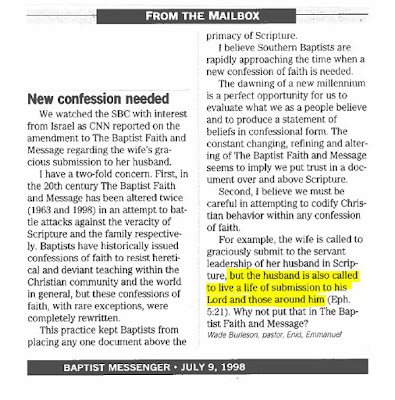 As you can clearly read, Dr. Nettles has misrepresented my position, most likely unintentionally.  Maybe Tom can’t imagine how a male Christian can have a submissive spirit toward a female, be it his wife, or a gifted servant/leader in Christ’s Kingdom, including the local church?

Time To Be Constructive, Not Critical

I’ve been pastor of the same church for the last 28 years. I served two terms as President of the Baptist General Convention of Oklahoma (2002-2004). I’ve also served two terms as Vice-President of the BGCO, and served many years on their Board of Directors. I have also served as a trustee of the International Mission Board of the Southern Baptist Convention, and in 1995, I served as Chairman of the Denominational Calendar Committee of the SBC during the sesquicentennial celebration.

The Director of Missions for the local Cherokee Strip Baptist Association is a member of the church where I serve. Our church has given well over $3,000,000 dollars to the Cooperative Program since 1992. In addition, our church has directly funded local and global mission efforts, spending millions of additional dollars on projects like the following:

1. A community planning center for the largest ethnic minority group in Enid.
2. A soon-to-be-opened women’s shelter for abused and abandoned women.
3. A men’s prison transitional housing center (the men come to Emmanuel Enid on Sunday).
4. A kitchen and shelter for the homeless in our community.
5. A hospital, orphanage, and community planning ministry in Niger, Africa.
6. Water well drilling equipment and training for over 100 water wells in Africa.
7. Direct mission support to missions in New York City, Guatemala, and a host of other mission points.

I share the above facts to only point out Emmanuel Enid is heavily invested in missions locally and globally. We love cooperating with churches from all different regions, churches who do things different from us. Yet, some have called for Emmanuel Enid to be removed from the Southern Baptist Convention because we have women in leadership roles at our church (I Timothy 3:8-12).

How Emmanuel Enid Does It

Unlike many typical Southern Baptist churches, we believe servant leadership in the local church and the home is never based on gender.

At Emmanuel Enid, we have a Leadership Team composed of 12 people, six men and six women. The 12 include the Chairpersons of our seven standing church committees (Finance, Personnel, Missions, Building and Grounds, Special Events, Emmanuel Christian School, and Deacon Service Committee), plus five trustees. The Deacon Service Committee has 30 servants on it, fifteen men and fifteen women, all of whom all meet the character descriptions found in I Timothy 3:8-13, just like Phoebe met the character qualifications of being a deacon (Romans 16:1).

Pastors at Emmanuel are servants. Nobody has authority over anyone. We serve according to our gifts. To us, a pastor is a “verb of service,” not “a noun of status.”

If you wish to read an official “white paper” on how Christ is the Head of His church and men and women serve as gifted, then I would urge you to download The Bible and Authority in the Church, a paper written by my father and me, print it off and regularly read it.

If a man or woman in our church has the gift of teaching, they teach. Christians from both genders who have the gift of prophesying preach. We don’t have rules about “mixed company” and we don’t restrict women from teaching in mixed company because we don’t see any universal restrictions against women in Scripture.

“In the last days, God says, I will pour out my Spirit on all people. Your sons and daughters will prophesy” (Acts 2:17).

Women preach at Emmanuel Enid on Sunday. When that happens, it is no different than a man preaching. “Sons and daughters will prophesy” is the Scriptural teaching.

Some Christian men seek to restrict females from serving as they are gifted by Christ because of the awful and unbiblical doctrine called “the inherent male authority over women.” Many years ago, I wrote a forward for Jon Zens’ book, What’s With Paul and Women:

“The viper known as ‘the doctrine of male authority’ has bitten the church. The toxin emitted by this errant teaching affects the females within our assemblies. It debilitates their God-given gifts, denigrates their Spirit-led ministry, and downplays their role as new Covenant priests. Those of us who have seen the church bitten need assistance, and help has arrived. This book will help you suck out the venom of male-only authority within the church. It will do so by helping you be able to articulate Jesus’ view of the equality of women and then revealing for you how Paul’s words in 1 Timothy 2 are consistent with Jesus’ own teaching and ministry. You will be able to point out to others how the modern institutional church has misconstrued and misinterpreted Paul’s writings on the subject, while at the same time ignoring Jesus’ words and life on the same subject.”

Some who read my writings on shared leadership object to what they read and point to three or four verses that at first glance seem to teach that women should be silent and men should lead.

Let’s be clear. I am saying the Bible teaches just the opposite of what those objectors say it teaches. I see the Scriptures to clearly declare that Jesus Christ and His early followers taught us that servant leadership is based on gifting, not gender; character, not control; and a spirit of service, not a position of power.

If I’m right, then I must respond to those few verses that seem to say something different than what I see the Bible to clearly teach.
.
For example, what about I Timothy 2:9-15? (see Artemis and the End of Us: Evangelical Errors Regarding Women).

What about I Corinthians 14:34-36? (see A Free Speech Ekklesia for All Brothers and Sisters).

What about Hebrews 13 and “obey those who rule over you”? (listen to this message).

The Bible clearly teaches that both men and women are to minister and lead in Christ’s Kingdom and in our Southern Baptist churches.

The problem in the SBC is men acting like “Gentiles” (Jesus’ words) and seeking to exert power, authority, and control over people. Power. Authority. Control.

When Jesus is the only authority over His people, then His people – His people means every brother and every sister in Christ – are empowered to serve as Christ gifts and commissions us.