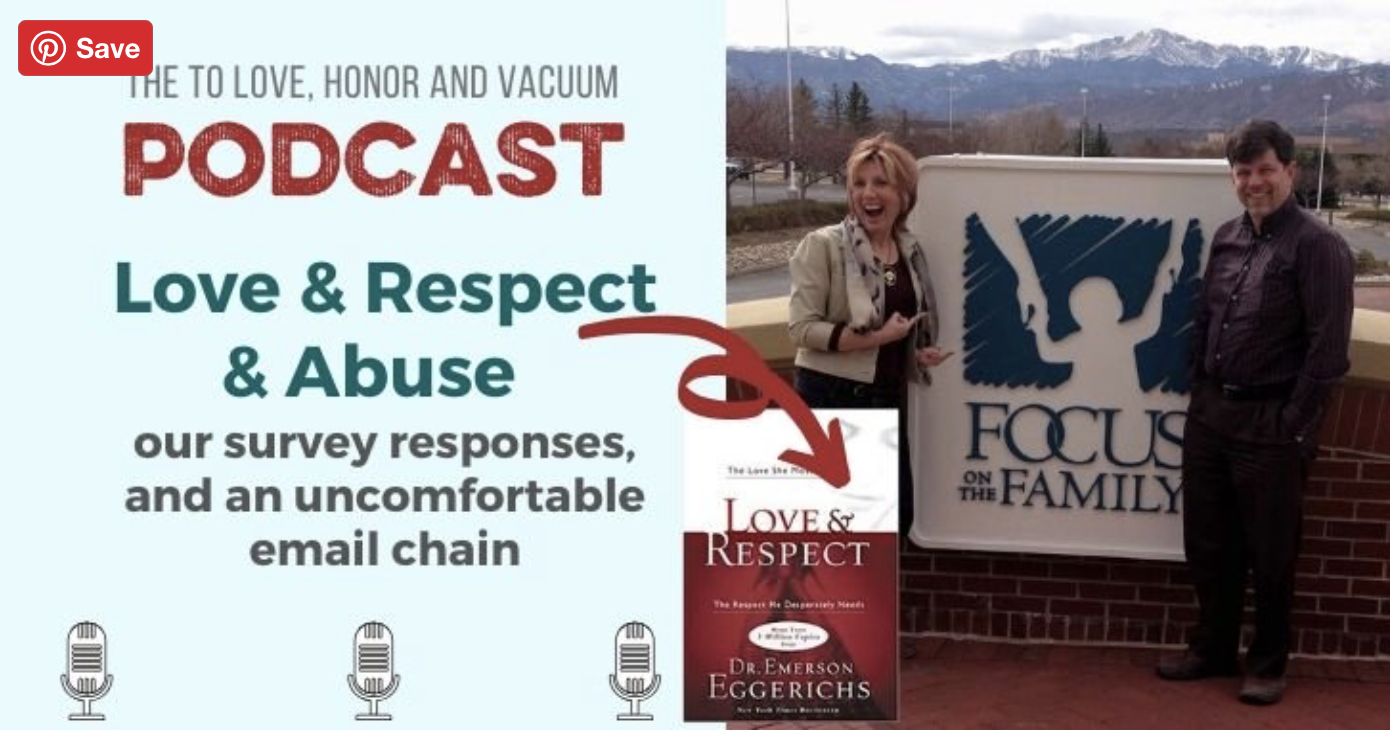 “There are far too many silent sufferers. Not because they don’t yearn to reach out, but because they’ve tried and found no one who cares.”  Richelle E. Goodrich

Focus on the Family is a huge supporter of Emerson Eggerich and and the contents of his book Love & Respect: The Love She Most Desires; The Respect He Desperately Needs. This organization regularly features Eggerich on their broadcasts and recommends his book.

Sheila Wray Gregoire blogs at Love, Honor and Vacuum. She is well known for her writings on marriage and sex.

I have long been aware of Emerson Eggerich and his book, Love and Respect. However, I disagree with the trajectory of what he has to say, finding that his binary approach to emotional needs and gender to be simplistic. I am even more alarmed how his views could contribute to further abuse in marriage. He appears to lay the blame on women for the problems that crop up in a marriage while the husband is viewed as being honorable and misunderstood.

I believe Focus on the Family is caught in a 40 year old time warp in which abuse in a marriage is viewed as the fault of the woman who did not give the man enough sex and respect. Thankfully, the world is changing and I suggest that Focus on the Family play catch up. For example, I fed the phrase *child sex abuse* into their search engine and found virtually no material on the matter. The same goes for sex abuse in churches or clergy sex abuse. Perhaps I’m mistaken and there are many articles. if so, get me the links.

Without further ado, here is the exchange between Sheila and Focus on the Family

Sheila has appeared on Focus in on the Family programs so she has an understanding of the format and belief systems.

Her letter is lengthy and well documented. In other words, she backs up her concerns with evidence. Here is her opening statement.

I have just finished a massive, comprehensive survey of more than 22,000 Christian women, asking over 150 questions about their marital and sexual satisfaction. In that survey, I left open-ended questions where people could name resources that helped their marriages and those which harmed their marriages. I did not list any resources; people volunteered them on their own.

Love & Respect was the most frequently mentioned resource that harmed marriages. For every 10 women who said Love & Respect helped their marriage, 15 volunteered that it harmed them. Two women even reported that the book nearly killed them–one said, “without exaggeration” and one “almost literally”. This book has hurt people, and that matters, because they matter.

I am going to present some of her points. I would urge you to read the letter in its entirety to see the links, quotes, etc.

Sheila ends her letter calling out Focus on the Family.

I’m afraid it will do the same to you here. In that same survey where Love & Respect was the most commonly mentioned hurtful resource, many also called out Focus on the Family as being harmful (and you were the fifth most mentioned harmful resource). For every eighteen people who said that you helped them, another 10 said that you hurt them. By not distancing yourself from harmful teaching, you are hurting your listeners.

Since it appears that this letter is on the FOF website, I don’t think I can copy here. So, I will print the first part of the letter and add a direct link to finish reading this.

A note from Dee: I noticed that they refer to Sheila as *a former Focus on the Family Broadcast guest.* Is that their way of saying good-bye?

Readers pay attention to the language employed by FOF which appears to paint Sheila as a person who is engaged in a one woman campaign against FOF/Eggerich at the beginning of their letter. They then give us a clue about the monetary ties to Eggerich.

Sheila Wray Gregoire, a popular blogger and former Focus on the Family Broadcast guest, has orchestrated a concerted campaign against the book Love & Respect by Dr. Emerson Eggerichs (originally published through Focus on the Family).

It appears that FOF is going to war since they are the ones responsible for introducing this material to the Christian world. It is my opinion that there will be no apologies forthcoming. Their motives are clearly mixed in this business enterprise.

(PS-I’ve never been on FOF and after this, I most assuredly will not be…😬)

Pay close attention to the final sentence on this site before you link over to FOF. It’s a technique called “covering your bases.” Being an outside observer, I believe this is a possible admission that they’ve heard the ugly rumors but it’s the fault of the reader, not the author or FOF.

For the past year, Sheila Wray Gregoire, a popular blogger and former Focus on the Family Broadcast guest, has orchestrated a concerted campaign against the book Love & Respect by Dr. Emerson Eggerichs (originally published through Focus on the Family). The crux of Mrs. Gregoire’s numerous criticisms of Love & Respect is that its central message—that husbands have a fundamental need for respect while wives have a fundamental need for love—promotes unhealthy behaviors in marriage, including inequality in male/female dynamics and emotional, physical, or sexual abuse.

As a ministry with more than 40 years of history invested in helping marriages thrive and equipping both husbands and wives to embrace the gift of marriage as God designed it, Focus carefully reviews every resource we offer. We hear daily from women who have endured rejection and abuse even within the context of Christian marriage and would categorically reject any book that would justify or perpetuate such behavior.

The fact of the matter is that we believe Mrs. Gregoire has seriously misread and misjudged various aspects of Love & Respect, and we further maintain that its central message aligns both with Scripture and with the common-sense principles of healthy relationships. Even 16 years after its release, Focus continues to hear from numerous couples who enthusiastically testify to the positive transformation Love & Respect has brought to their marriages.

Of course, any book can be misinterpreted, misapplied, and quoted out of context...link to continue

Part Three: Sheila responds to Focus on the Family’s statement. She sent this directly to me today.

I have highlighted a few sections in the letter. This is merely for the clarity of the reader. I also want to draw attention to Point 2 in this response. As readers of this blog know, I believe in carefully linking to sources, etc. to prove my point. Nothing irritates me more than to get an email from a critic, accusing me of *this and such* with absolutely no links to any of my writing. I believe that Sheila’s response if correct.

On January 17, Focus on the Family issued a statement concerning their interactions with me that was problematic in several ways.

1. They impugned my motives and gave factually inaccurate information.
They said, “Despite attempts to clarify this with Mrs. Gregoire via email, she has continued to mischaracterize and selectively excerpt Focus on the Family’s replies to her and her supporters…”
I have sent five emails to Focus on the Family:
I then republished my October 6 email, with some minor edits to include new information, on January 15 on the blog as an Open Letter to Focus on the Family and their Employees.
Of those five emails, Focus on the Family only ever cursorily answered the email on October 2.
That hardly constitutes “attempts to clarify this with Mrs. Gregoire via email.”
In addition, they accuse me of “selectively excerpting” their replies. On the contrary, I have published them in full in .pdf, with screen shots and with text since the screen shots were hard to read, and I linked to those emails in my open letter. Publishing something in full is not “selectively excerpting”.

2. They do not link to any of my articles, but critique them anyway.

It is proper internet etiquette to link to that which you are critiquing. The fact that Focus on the Family refrains from linking to me shows that they are concerned that if people read what I have said, I may persuade them.

3. They continue to disregard the many critiques I brought up in my Open Letter,
focusing instead on two minutiae, which I have since corrected.

4. They are still framing this as a doctrinal issue, rather than addressing what has always been my primary concern: this book is hurting women.

They say that every book hurts women if it is misconstrued, but this is simply not the case. In my survey of 22,000 Christian women, many resources were mentioned with very bad harm/help ratios (meaning that large numbers of women said the resources harmed them, in comparison to the numbers who said they helped), including Love & Respect, Every Man’s Battle, I Kissed Dating Good-Bye, Created To Be His Helpmeet, and Focus on the Family. Many resources, however, had virtually perfect help/harm ratios (with many saying that they helped, but virtually no one saying they hurt), including resources like the Boundaries books, Leslie Vernick’s books, or John Gottman’s books and research. Social science research clearly shows that some points of view, if believed, are more likely to lead to negative marital outcomes, so it is hardly surprising that some books do far more harm than others.

Jesus left the 99 to go after the 1. He cares when people are hurting. He calls us to compassion. I see none of that in Focus on the Family’s statement.

I would remind them that Jesus is not impressed with people who willingly blind themselves to the harm being done to others. As Jesus said, many such people will say at the judgment, “‘Lord, when did we see you hungry or thirsty or a stranger or needing clothes or sick or in prison, and did not help you?’“He will reply, ‘Truly I tell you, whatever you did not do for one of the least of these, you did not do for me.’”

I encourage Focus on the Family to care for those who are harmed by this book. Listen to their voices (and many are in the comments in my open letter). Your inaction is showing where your priorities lie, and showing that you are not a safe resource for women or marriage..

It is my opinion that Focus on the Family is mired in decades old memes that don’t address the increasing recognition of abuse in Christian church and marriages.

I believe that that Focus on the Family needs to acknowledge the longstanding criticism of Love and Respect by Emerson Eggerich. In this day of #metoo #churchtoo it’s time to recognize the scourge of abuse in today’s Christian churches, denominations and parachurch ministries. The church needs far more than simplistic buzzwords of love(females) and respect(males) that have been around for decades. Such teaching has done little to address the rising reports of abuse Christian families. Focus on the Family appears to be hiding behind the comfortable paradigms of decades past.
It’s time for them to begin to address the serious problems of sexual abuse (child and adult) and domestic violence but it may mean taking a closer look at some of their sacred cows.