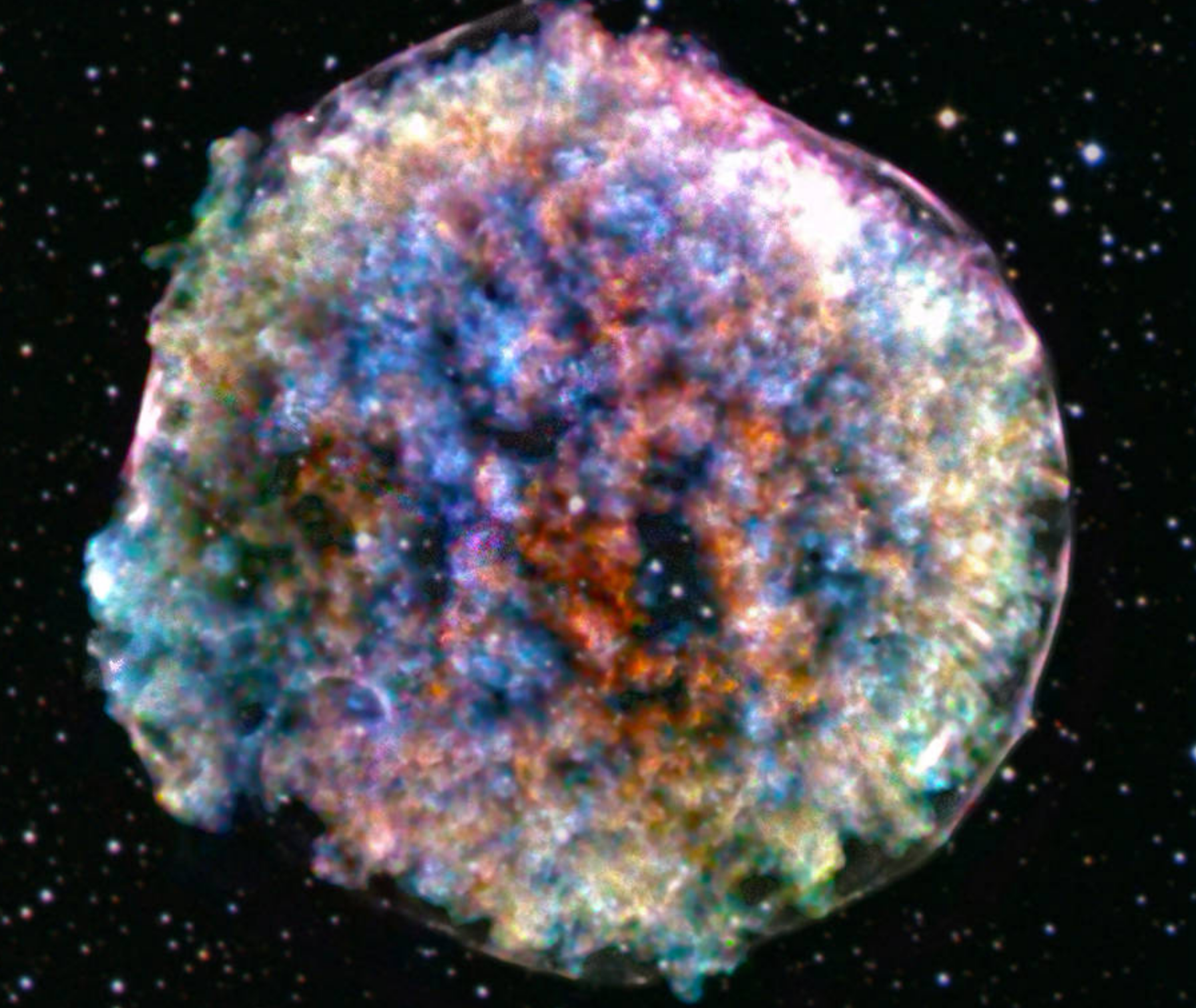 The Tycho Supernova: Death of a Star

A number of people on Twitter have been concerned about a person who appears to be obsessed with utilizing Scripture to make derogatory comments about me. This person, who is most likely a man, has two accounts and maybe even three.

Here is a link to who said that

Note that he is following two people and has only two followers since 9/19. Note that those two people follow me as well and also follow one another.

Here is a link to Victim Princess. 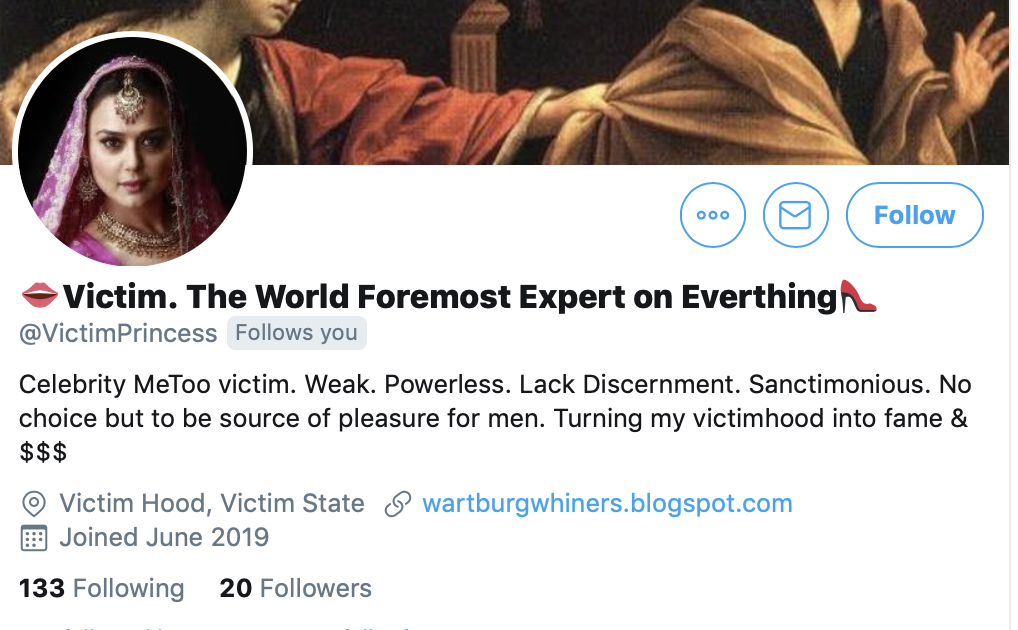 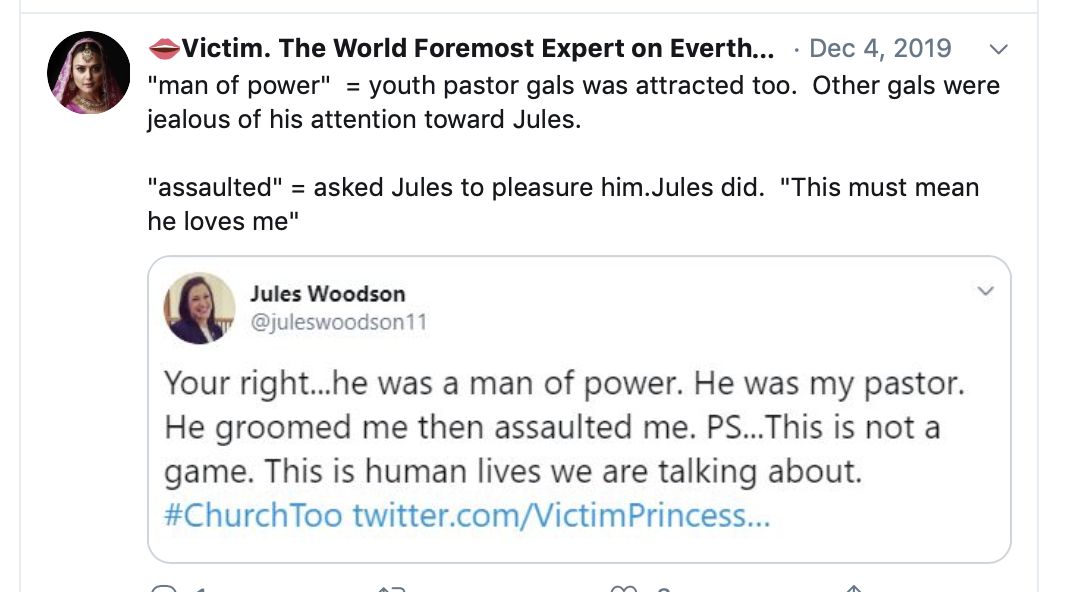 It appears that Victim Princess goes after victims written about at TWW. Now look at this link in his about me box:

This is a website start by a man who goes by Seneca Griggs whose real name is Jimmy Brown. He has been thrown off more blogs than just about anyone I know. He does not appear to like victims, sometimes claiming that they are to blame when they are molested. He has upset so many people here that he was told to go away and return when he wanted to play nice. Rumor has it that he is some sort of counselor but I have a hard time believing it.

His website gets no traffic. Consider visiting without commenting because it will only encourage him. However, I am not convinced this Twitter account belongs to Jimmy.

Here is a link to Raquel Jones 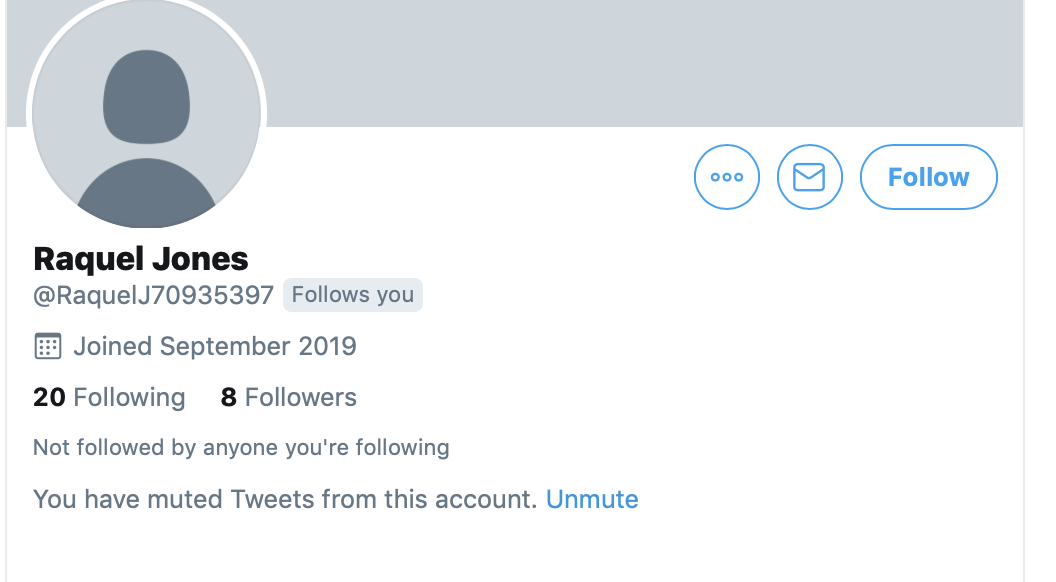 I recognized the writing style of some of the tweets. I believe that this is a male who has been stalking me for a few years. I recognize his writing style. I have muted all of these accounts so I don’t have to see this nonsense. However, these accounts tag some of those who follow me who then try to tweet sense into this person with no results, just further insults. And yes, I believe it is one person or maybe two if Jimmy has decided to team up with the ringleader.

Yesterday, some folks became up set and have reported one of two of these accounts to Twitter, asking that that they be blocked. Since most of them do not understand the history I have with this person, I promised I would do an historical review of what has been going on.

Regular readers suffered through this a couple of years ago.You may want to take a break and keep following The Crown on Netflix. Current events lead me to believe that this series could be with us for quite awhile.

The events surrounding Tom Chantry and Iain Campbell showed up around the same time.

This man was well known Reformed theologian and was  revered in a number of those circles. He lived on the Isle of Lewis in Scotland where he was a pastor. He wrote a number of theological books and was invited to speak all over the world. He refused to leave his home. He committed suicide when it was discovered that he had had an incredible number of affairs with the women on the Isle.

I became incensed when I saw that women in the church and on the Isle were blaming his lovely wife for his antics. So, I wrote a post. Suddenly, I received some insider information, including emails that he sent to his women. This caused a ruckus because the church leaders appeared to be planning on covering up this nastiness. My posts on the matter prevented that from happening. However, I was aware that some leaders were not happy with me. Here is one of my posts.

Blindsided: The True Story of the Circumstances Surrounding the Death of Iain Campbell

PS:I will never tell anyone who gave me the information. This has caused some gnashing of teeth.

As most of us know, Chantry will be spending many years as a guest of the State of Arizona, having been convicted of a number of instances of abuse against children. These were felony conviction. I began to follow Tom Chantry when I read some media accounts of his arrest. I followed this accounts until Todd Wilhelm moved tom to Arizona from Dubai and took over following this story.

I was accused by some Reformed folks of prejudging the outcome of Chantry’ situation. In fact, I was told I had formed a holy mob to go after Chantry! All I said was I believed the victims. Here is a post that I wrote about this.

Turk used to blog with Phil Johnson (John MacArthur’s right hand man) at Pyromaniacs. Frank decided to accuse me, along with a couple of other folks of slander. However, he did it in a most unusual way. He decided to accuse me of necrophilia on Twitter. (Yes, you read that right.) He was trying to prove a point. He claimed that I was guilty of slander by believing the victims of Ton Chantry. I explained how he didn’t seem to understand the definition of slander.  So he thought he was being cute when he accused me and others of necrophilia.

I held my breath and said that he was about to become an example of true slander which might result in a civil settlement. I asked him if John MacArthur knew he was saying stuff like this. Within short order, Frank Turk left social media for good.  Here is a link to the story.

The infamous letter sent to Dee’s church, community groups, my husband’s employer at Duke, and a host of other entities.

Here is the post with a copy of the letter and my response. To this day, I am grateful for my pastors and the Lutheran church for their support.

If you read this letter, you will see that two names come up: Iain Campbell and Tom Chantry. I believe that the writer’s real concern was Chantry. You can also see that this person’ writing style is not particularly compelling: mostly anger and poor pagination.

TWW began to receive comments that were angry and somewhat threatening.

These comments were usually caught by our spam filter and held. However, the style of writing was remarkably like the letter:poorly written and threatening. These comments have been saved to a file. We cannot track him down because he uses a proxy server.

We have a staggering number of these. Do you see a similarity to those on Twitter? I sure do.

I believe that he is someone related to one of the people mentioned in this post.

Since he has been effectively blocked, I believe he has come to Twitter to see if he can cause some trouble.

That is why I have muted these accounts. I will continue to do so since there seems to be some sort of obsession with attempting to get through to me.

So thankful for the advent of spam filters and mute capabilities.