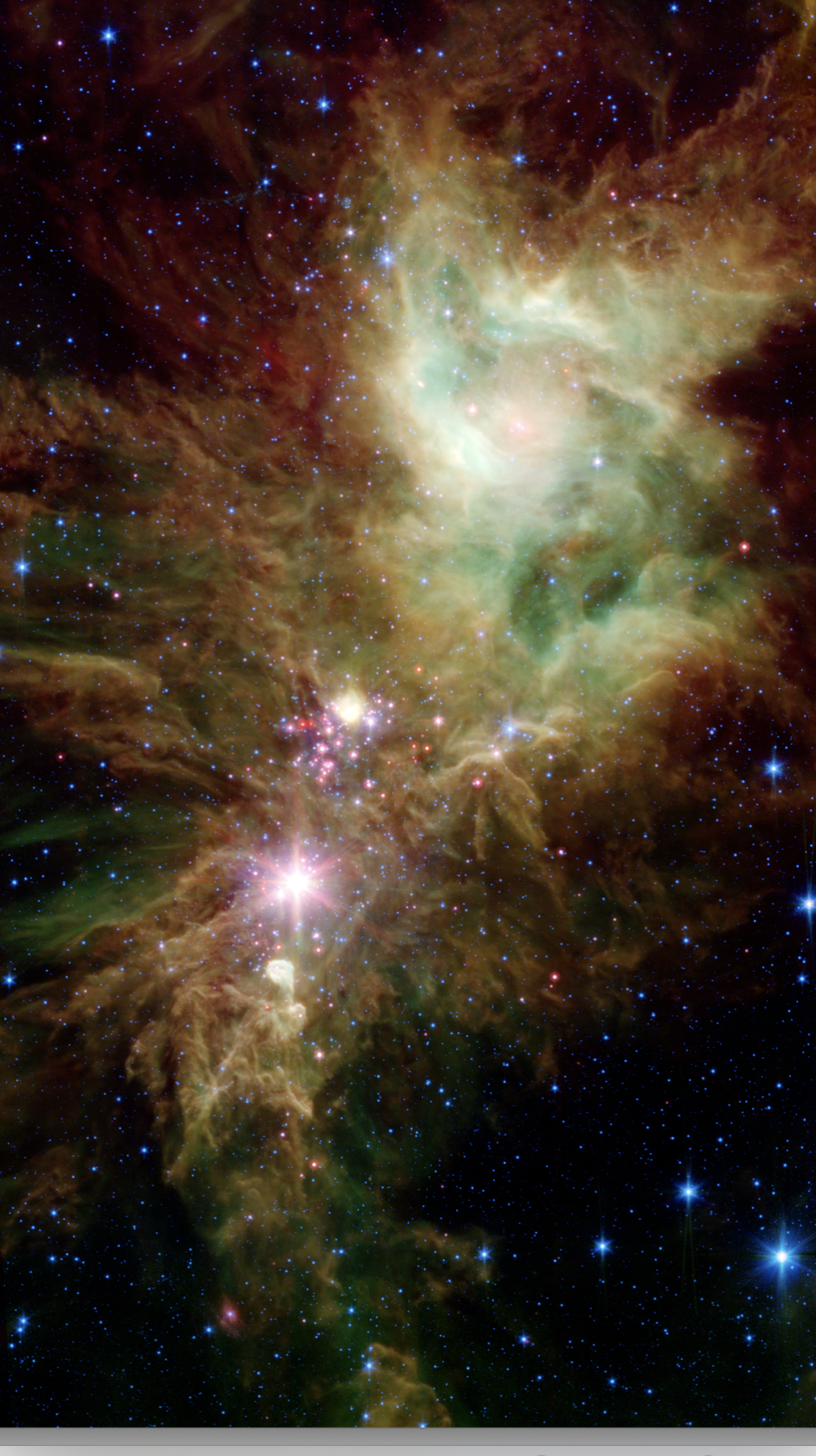 Stellar Snowflake Cluster: The newly revealed infant stars appear as pink and red specks toward the center and appear to have formed in regularly spaced intervals along linear structures.

“Child abuse casts a shadow the length of a lifetime.”  Herbert Ward

The newly revealed infant stars appear as pink and red specks toward the center and appear to have formed in regularly spaced intervals along linear structures.

As the numbers of ARBCA churches continues to decline, another molester in an ARBCA church is arrested and charged. Todd wrote this post at his website: Thou Art the Man and has given me permission to reprint it at TWW. 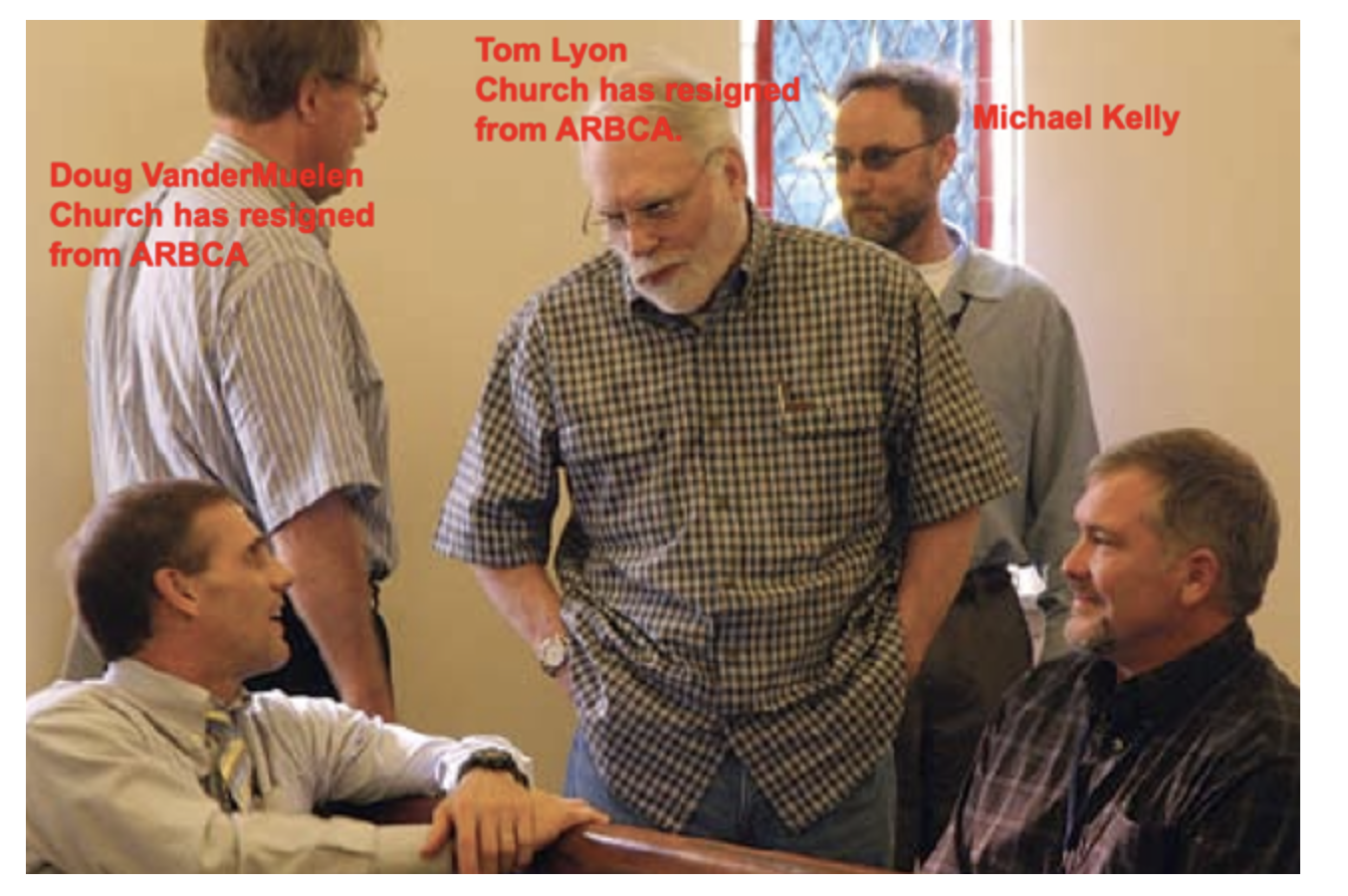 A damning statement by the judge in the Tom Chantry trial.

Basically, although ARBCA was not on trial during the Tom Chantry hearing, it is apparent to observers that ARBCA leadership did what they could to keep Tom Chantry from being found out. 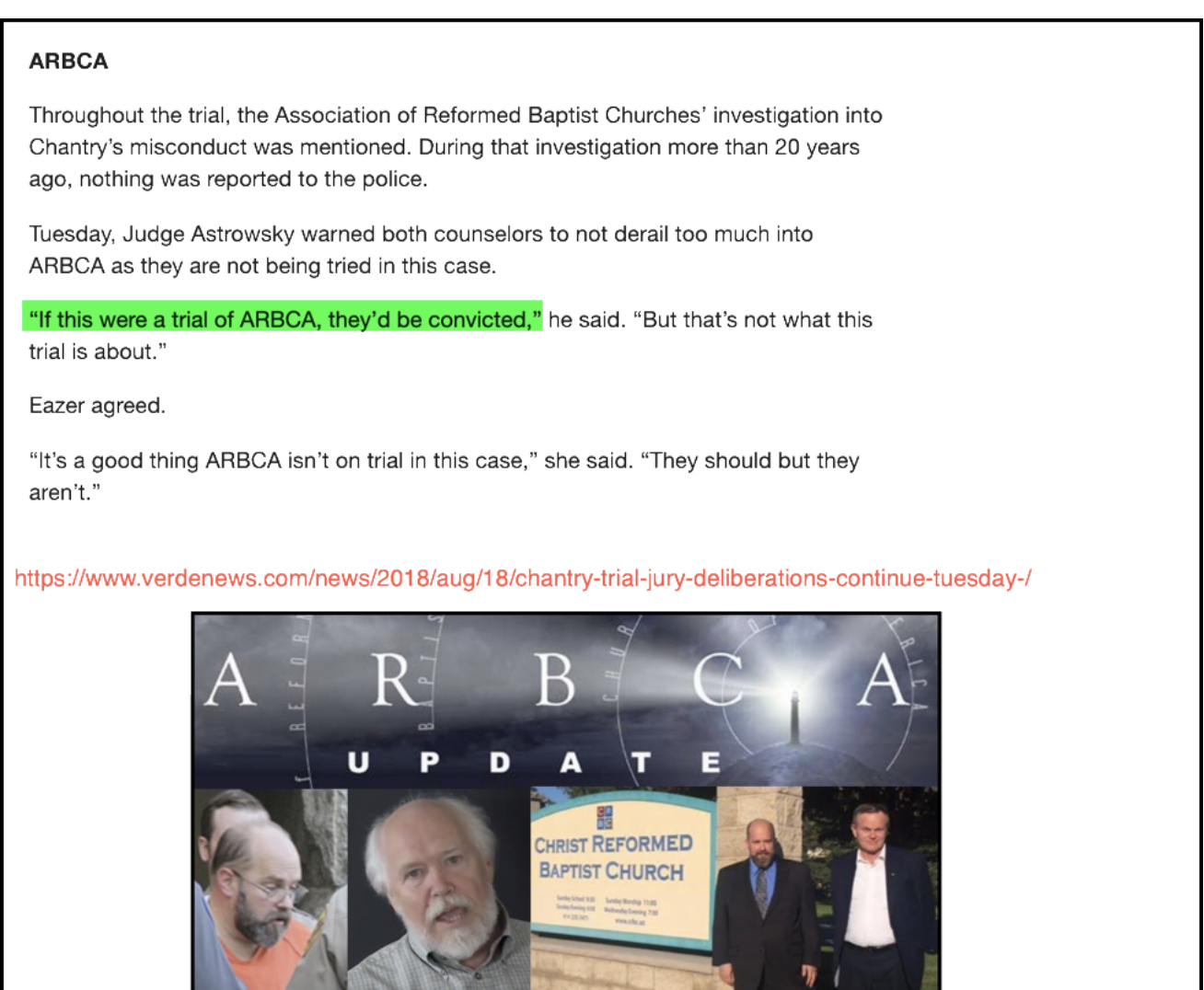 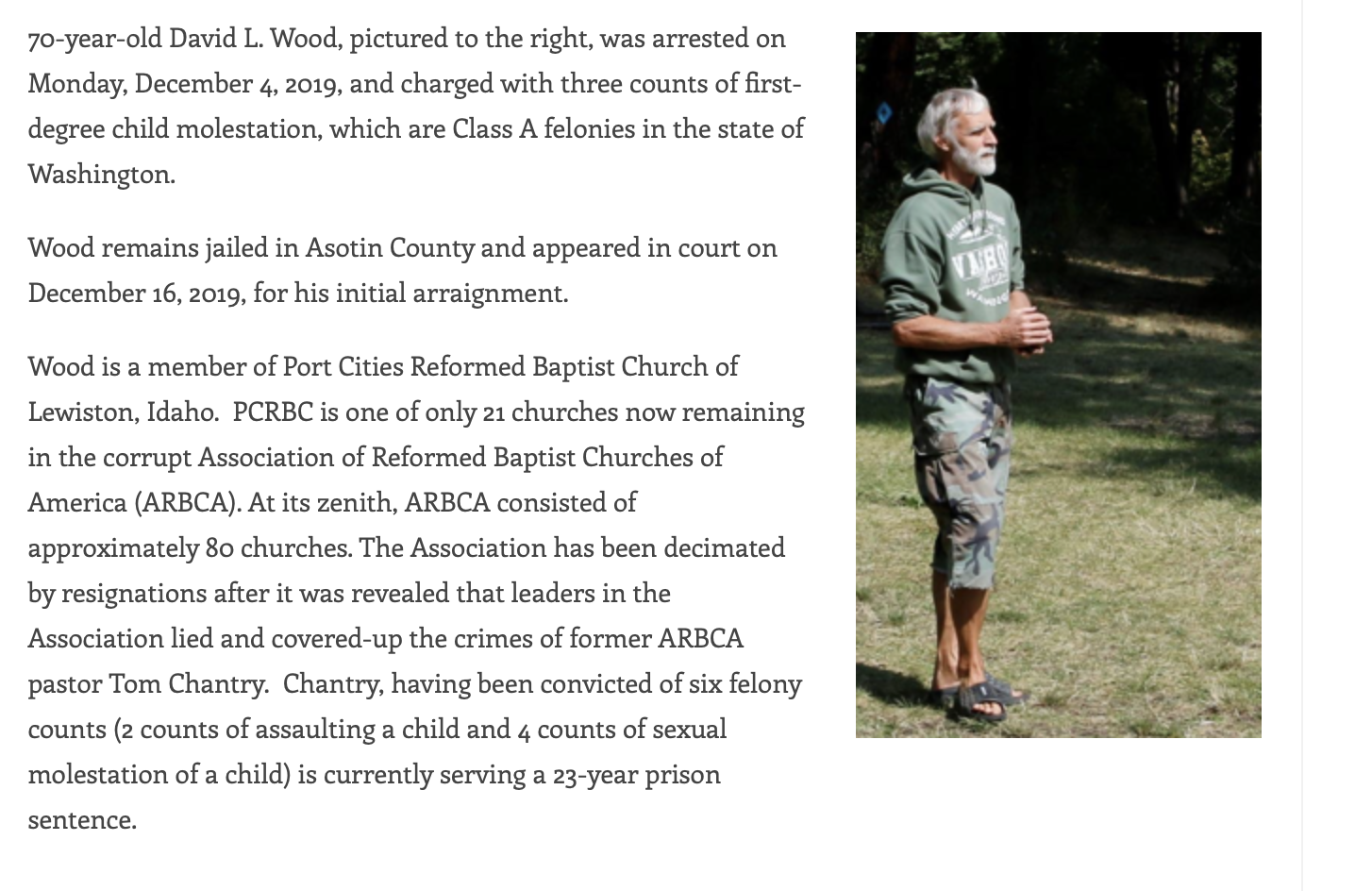 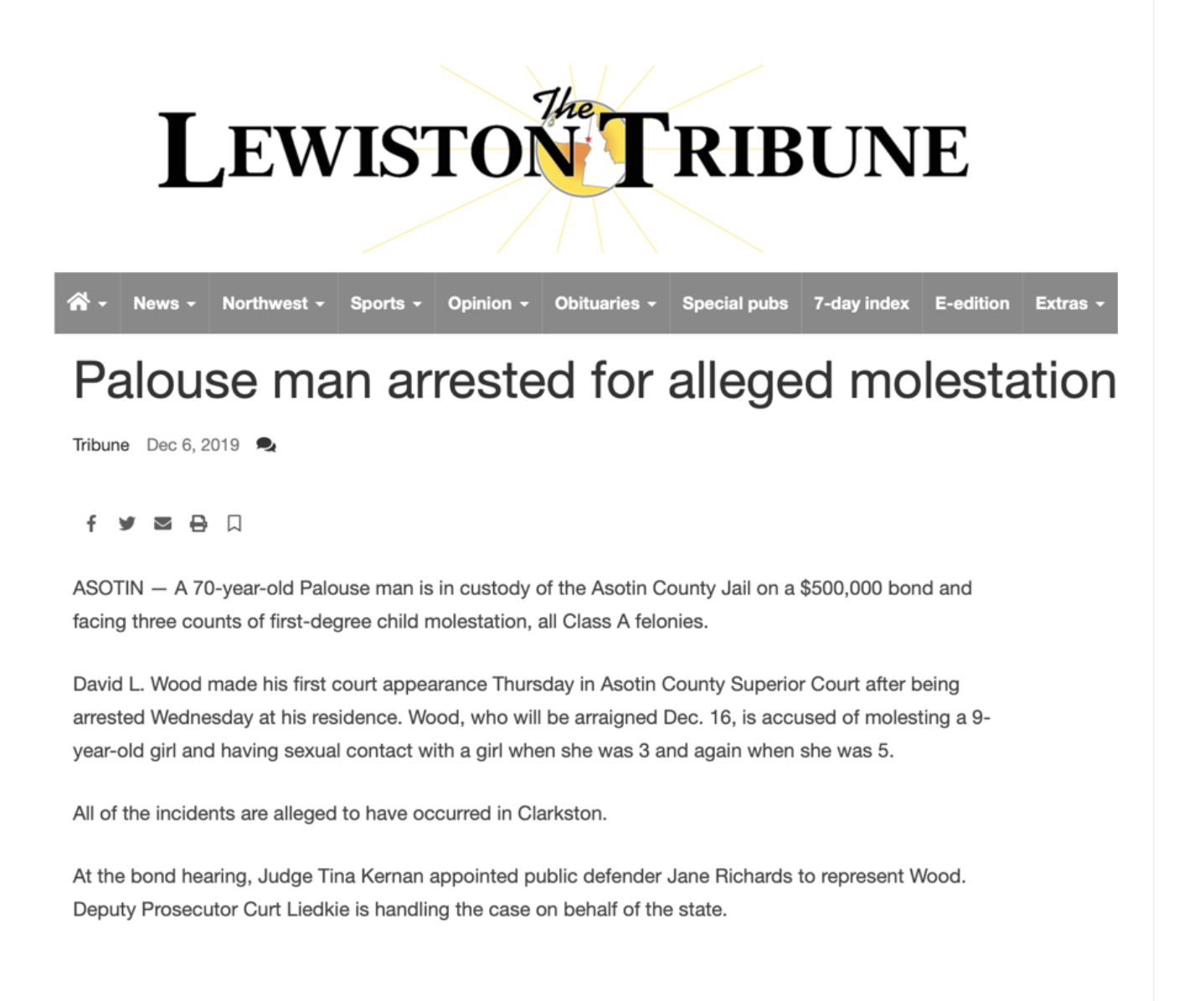 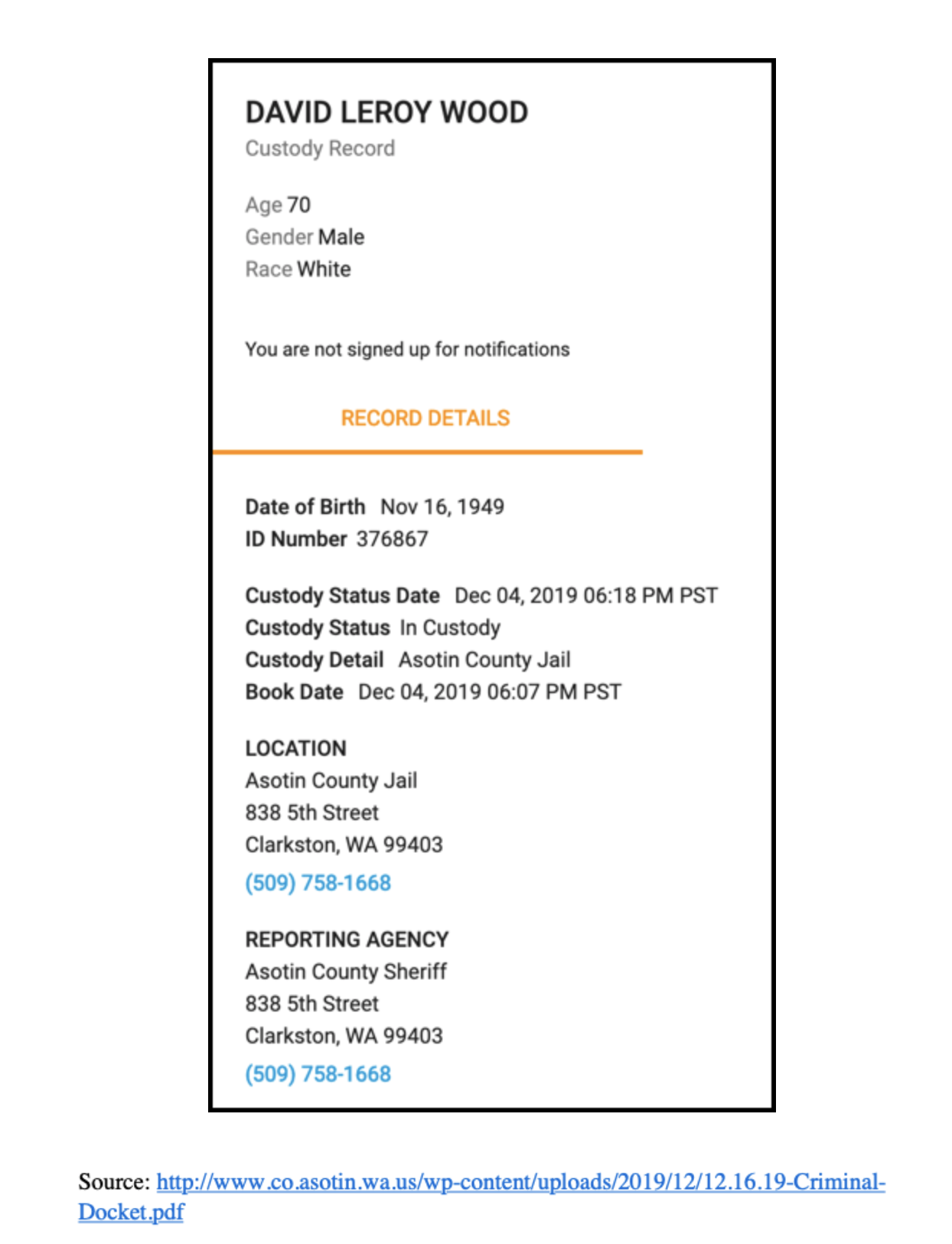 Todd’s research into this matter also turned the fact that Woods had been arrested in the past for indecent liberties in the state of Washington.

In my research of David Wood, I discovered, not surprisingly, that his recent arrest for sexual crimes was not his first.  Below you will see documentation that Wood was sentenced in 1993 on two cases of “Indecent Liberties” in Washington state. I am not aware of what type of sentence Wood received, but I am guessing he did not receive any prison time.  Wood lived in Yakima, WA from 1992-2008 and a source told me while living in Yakima he frequently drove over Snoqualmie pass to attend church in the Seattle area. 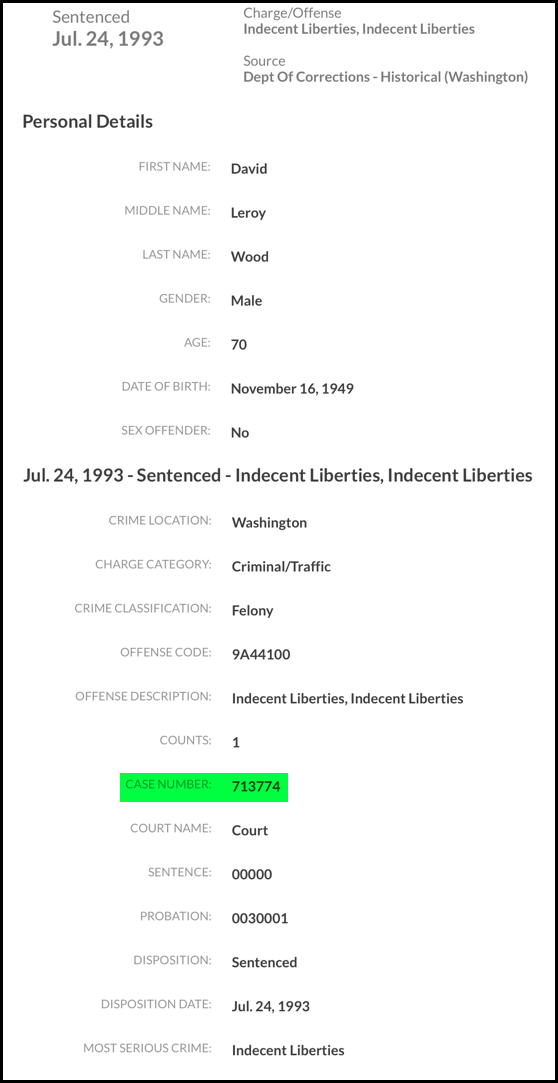 Here is the information I found when researching what the felony crime of “Indecent Liberties” consists of:

Indecent Liberties Under Washington Law There are two elements to the crime of indecent liberties. These are:

The definition of “sexual contact” is any touching of the sexual or other intimate parts of a person done for the purpose of gratifying the sexual desire of either party or a third party. The definition of “forcible compulsion” is the same as used for rape. Indecent liberties is a Class A felony punishable by up to life in prison, and/or a $50,000 fine.

Mandatory Sex Offender Registration In addition to the above penalties, a defendant guilty of either rape or indecent liberties must register in the Sex Offender Registry. Sex offenders that intentionally do not register, or that provide false information when registering, face even more penalties. These can include additional prison time.

Port Cities Reformed Baptist Church is a small church that was formed in 1995. Nearly 25 years later they still do not own any property but meet in the Lewiston Community Center.

Hodgins is no longer in the ministry, having resigned from Trinity Reformed Baptist Church in La Mirada, CA. (Trinity has also recently resigned from ARBCA.) He has returned to the Seattle area.

According to sources, prior to Hodgins leaving Lewiston, he managed to get Michael Kelly voted in as an elder. Not all church members were enamored with this move; nasty emails were exchanged and all church members CC’ed.  Hodgins and Kelly managed to oust a few of the troublemakers from the church and many others left of their own volition. Michael Kelly was then ordained to the ministry in what can only be described as an unusual, private ceremony with Arden Hodgins and Tom Lyon present.

Soon after, Hodgins moved to California to assume his new job ad pastor of Trinity Reformed Baptist Church. Kelly called a church meeting and said he would be preaching and wanted the church to set his pay for this. Kelly left the room while church members discussed what he would be paid. They all assumed he was an interim pastor at that point therefore they also discussed setting up a search committee.

Kelly returned to the meeting and he was told that the church was going to set up a pastoral search committee.  Kelly immediately nixed the idea of a search committee and said he would query ARBCA to get possible candidates to come. This caused more people to leave the church. Membership had dwindled from around 50 people prior to Hodgins’ departure down to 15.
No candidates were ever presented to the small remnant of members left at Port Cities Reformed Baptist Church. The result has been that Michael Kelly has been the pastor from 2005 until the present day.
Here is a photo from a past General Assembly meeting of ARBCA. Michael Kelly is seen rubbing elbows with ARBCA heavyweights Tom Lyon and Doug VanderMuelen. Both of their churches have recently resigned from ARBCA.  Michael Kelly’s church remains. I can only surmise that Kelly hopes to be named as ARBCA Coordinator or perhaps Administrator of the Administrative Council. I am quite certain he will obtain one of those positions once his church remains as the last church in ARBCA! 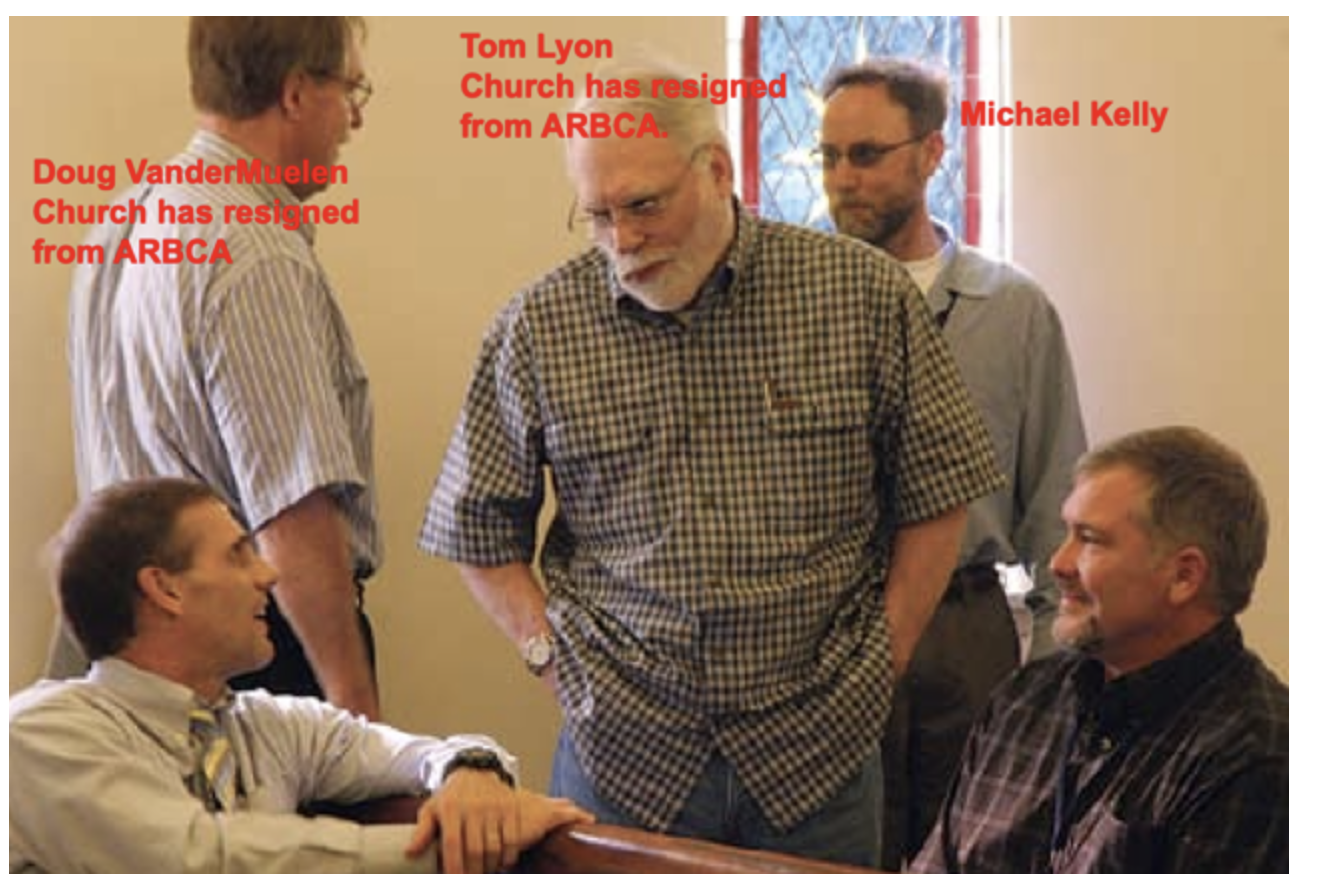 Here are two photos of the Administrative Council of ARBCA. Notice Al Huber’s obvious affection for Kelly? Huber is the father-in-law and financial underwriter of convicted felon Tom Chantry, the pedophile. A finer judge of character would be hard to find! 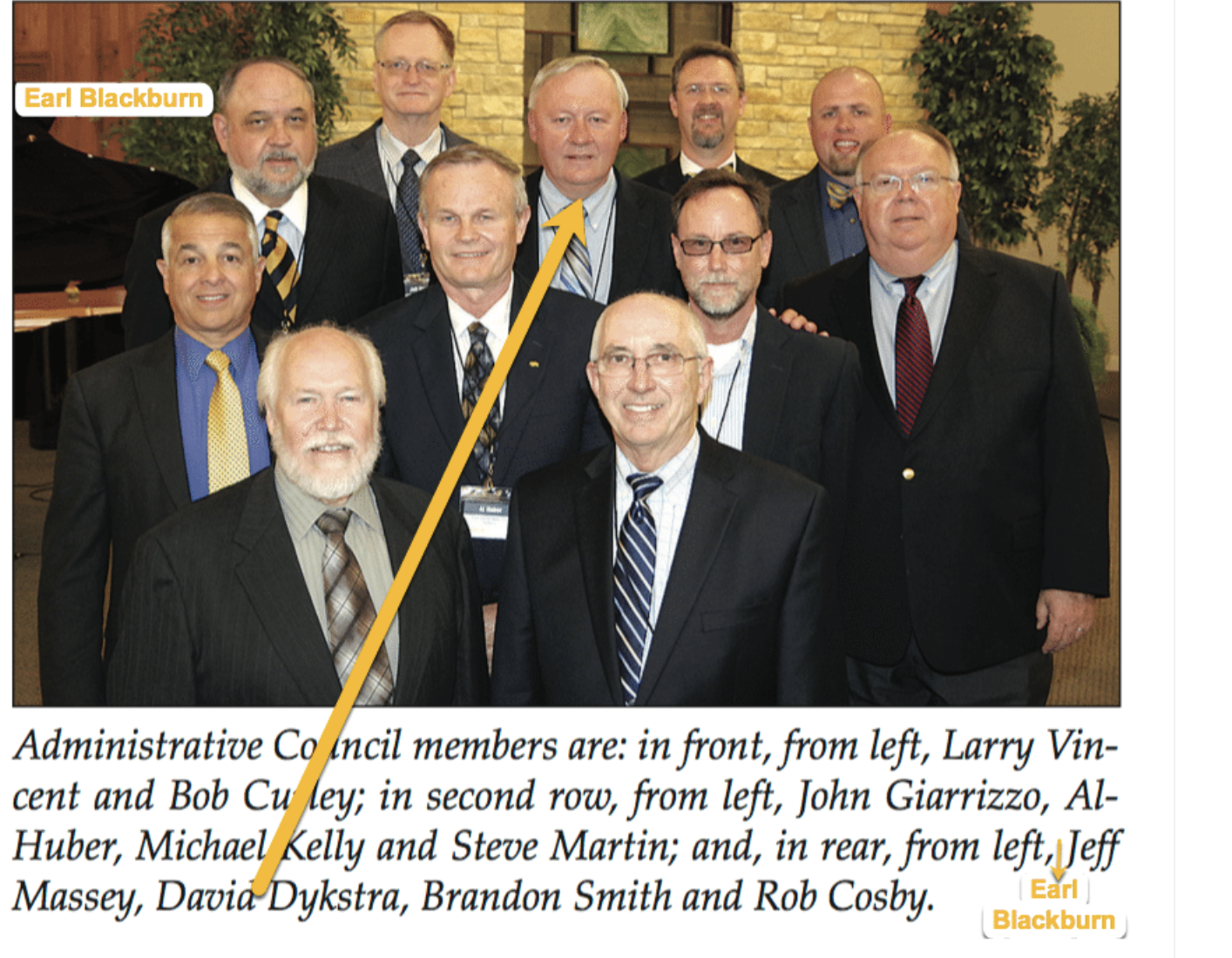 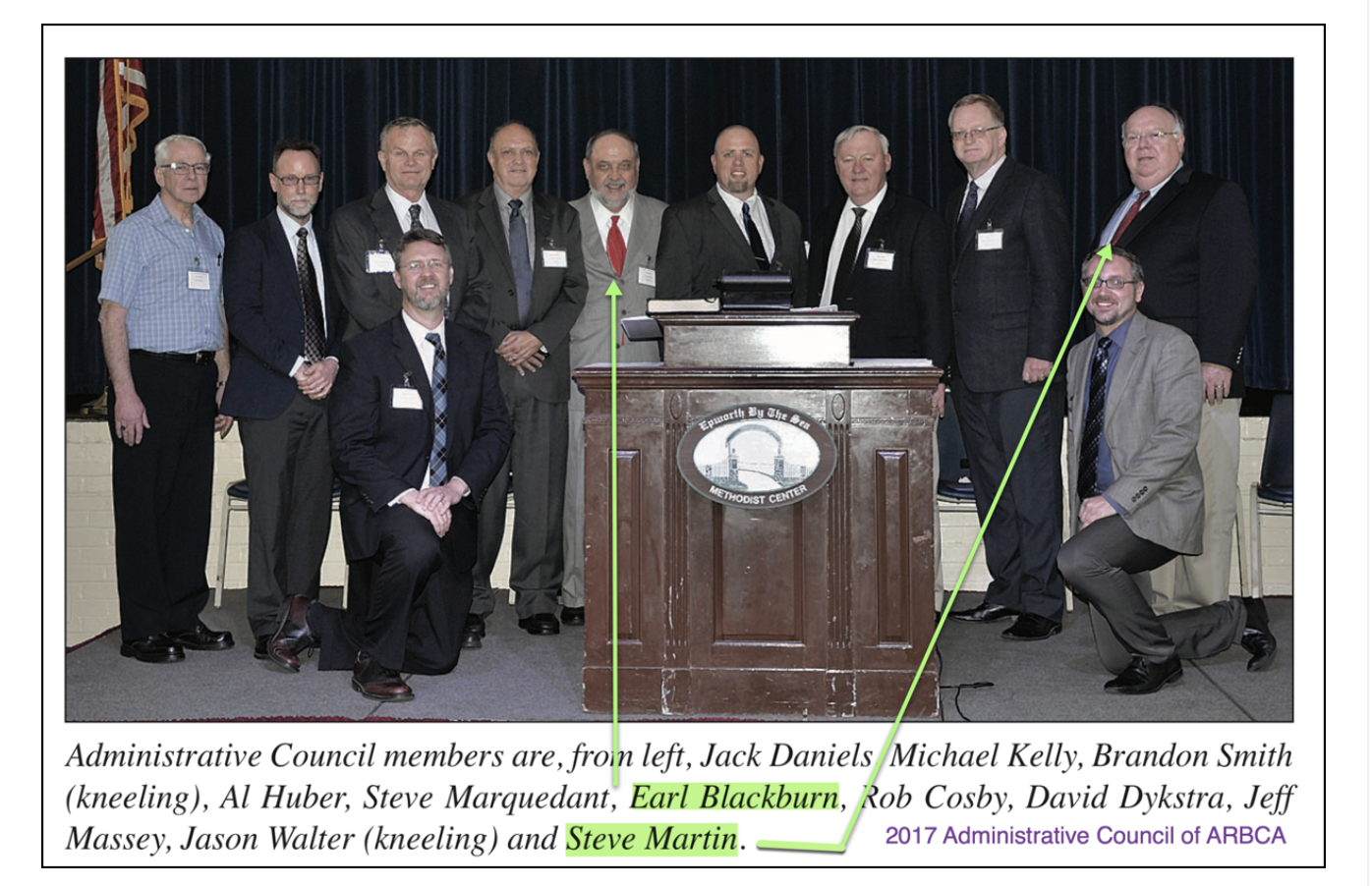 On December 16th I placed a call to Michael Kelly.  I hoped to ask him a few questions about David Wood, a member of his church – you know, one of those souls for whom Kelly must give account to God. (“Have confidence in your leaders and submit to their authority, because they keep watch over you as those who must give an account.” Hebrews 13:17 NIV)

I  began our conversation by identifying myself, informing Kelly of my name and the fact that I write a blog called “Thou Art the Man.” I said I wanted to ask him a few questions about David Wood.

Kelly replied he was not interested in speaking about David Wood with me.

Why not, I asked?

He replied, “Because the matter is in the hands of the authorities and I don’t want it all over “the blogs.”

Kellly then abruptly hung up!  As you can see, the entire conversation lasted 46 seconds 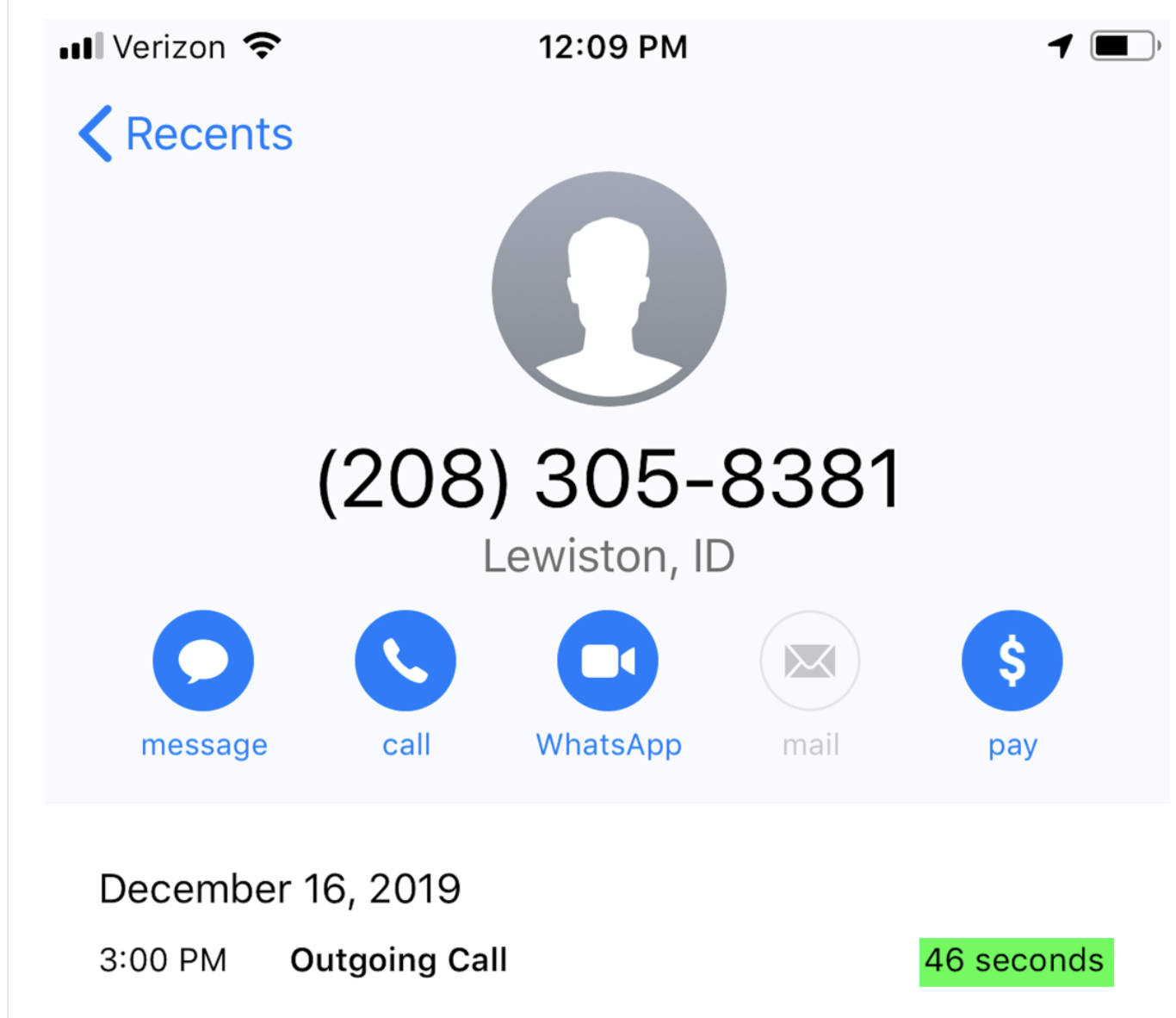 Had ARBCA Pastor Michael Kelly had the courage to speak with me I would have liked to ask him if, in his role of keeping watch over David Wood’s soul, he was aware of Wood’s prior felony convictions in 1993 for “Indecent Liberties.” I would have asked him what type of support, if any, he and his church were providing for the abused. I would have asked him if he knew what church Wood was attending in the Seattle area when he made the weekly trek from Yakima to Seattle.

But alas, ARBCA Pastor Michael Kelly didn’t speak to me because he didn’t want the story on the blogs. Sorry, Michael. Stories of abuse of children in ARBCA churches have a way of getting out. Providential, I guess.

I support the victims.

I hope the members of Port Cities Reformed Baptist Church do as well.

I also hope they have the good sense to prevail upon their pastor to resign from ARBCA. If not, I suggest they find a new church. In my opinion, their pastor is hopelessly deceived. Perhaps it’s time for him to find a new line of work. 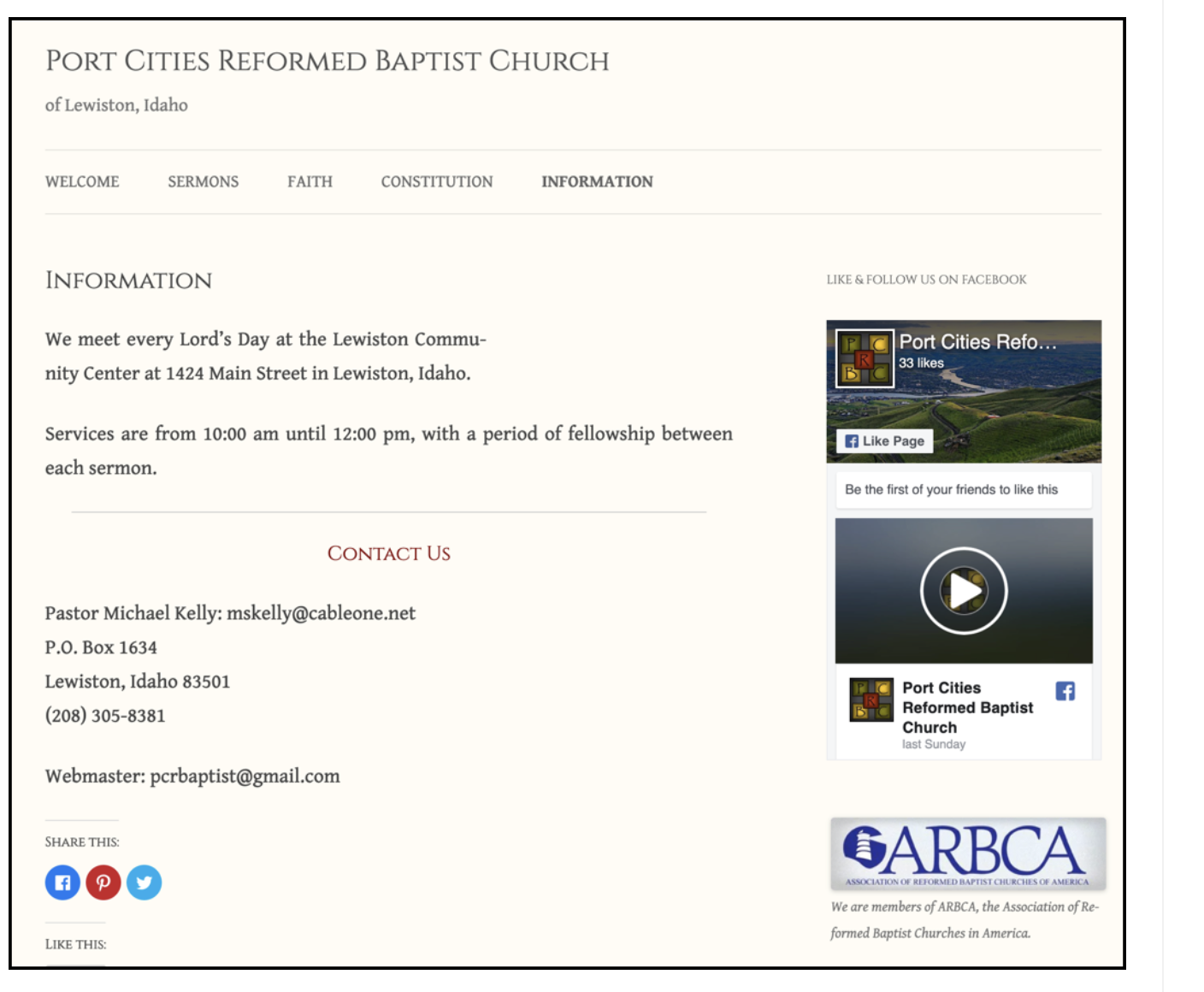