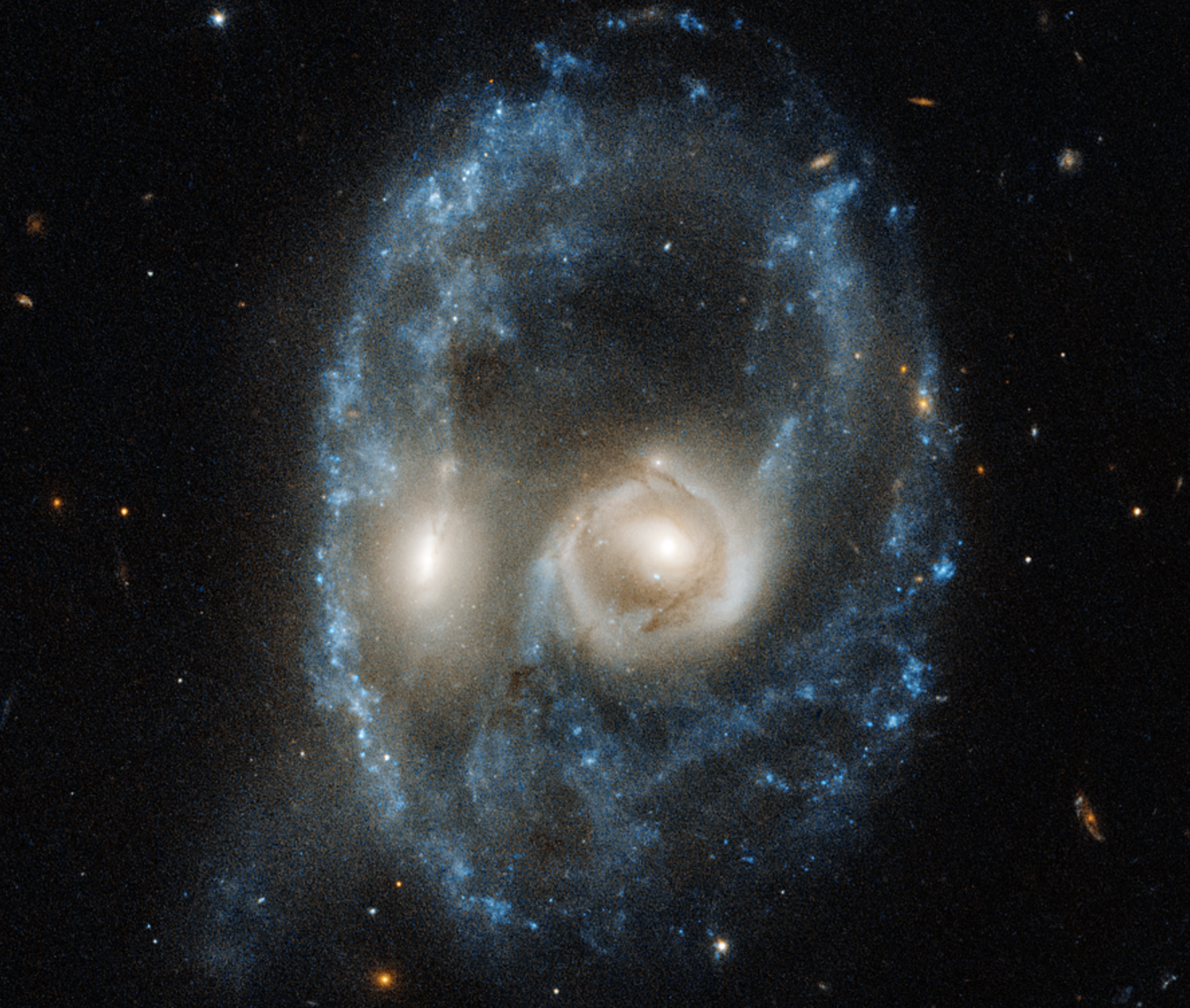 “Never hide things from hardcore thinkers. They get more aggravated, more provoked by confusion than the most painful truths.” ― Criss Jami

Update: It looks like the comments were not checked again. I apologize. It’s supposed veto be automatic.

This post is based on a real conversation I had with some folks who belong to a particular church in North Carolina. I brought up this exchange on Twitter and a huge discussion ensued, with people finding out that they are members of a SBC church not a nondenominational church. I am not going to name the church but will discuss it in vague terms.

We are not Baptists and the thought of the upsets me.

I was at a gathering with a group of Christians I’ve known for a long time.

Person A::”You will be pleased. Our church is setting up a program to help those who have been sexually abused. It’s a really good program which involves outside counselors who are helping us to set up a supportive program.

Me: “That’s wonderful! Are you using the Caring Well materials that the SBC is giving out to churches?”

Person B: “Why would we use Baptist material? Our church isn’t Baptist.

Me (now confused): Your church is a Southern Baptist Church.

Person B: “My brother works there and the church is definitely not Baptist.”

Person A: “I think they don’t talk about it because it’s not important. It’s just in the background”

At this point, I realized that I had stepped into an explosive situation. I know their church is a member of the SBC. Yet, I could tell that they were becoming quite upset so I decided to end the conversation.

I was left with the question: Why did they become upset? Nothing changed. Their church was still the same church. Yet, something changed in the conversation. Tension was present.

So, I introduced the situation on Twitter. I suggested that people check the SBC church directory and see if their *nondenominational* church is listed. A few people responded. They were shocked to discover their nice nondenominational church was really a member of the SBC.

Here is how to check if your church is a member of the SBC,

My concern has nothing to do with Baptist churches removing the word *Baptist” from their name.

For years, I have been writing about churches removing the word *Baptist* from their name. Here is just one post from 2014.

It is sad to realize that the word *Baptist* does not sell well in the north and west. Even in the South, millennials are rejecting traditionally named SBC churches. So, I get why they are doing this.These churches are desperately trying to get people in the door where they should get a positive impression.

I am concerned about something else.

A number of SBC churches are deliberately hiding or deemphasizing their association with the SBC from their members.

In the below video, JD Greear announced to his clueless church members that The Summit is really a member of the SBC. He claimed that their church doesn’t like everything that goes on in the SBC. He was running for SBC President (which he now is.) Greear became pastor in 2002. The church was, and is, a member of the SBC. Yet, there were long time Summit members who had absolutely no idea of the church’s affiliation with the SBC. Why?

I have talked with at least 10 members of his church who had no idea their church was an SBC church. All of them became agitated when I said that The Summit was a member of the SBC. Why?

However, the video clearly demonstrates that JD Greear and The Summit Church staff actively sought to downplay any affiliation with the SBC since he had to explain it them. Sadly, it appears that he understood that a number of the faithful didn’t know they were actually Baptists.. 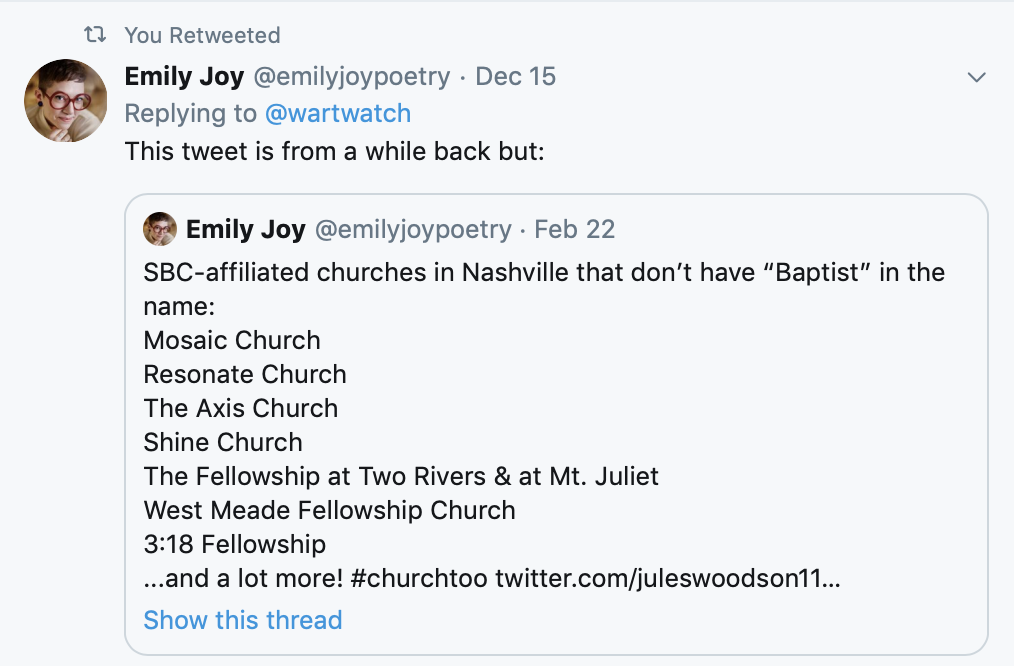 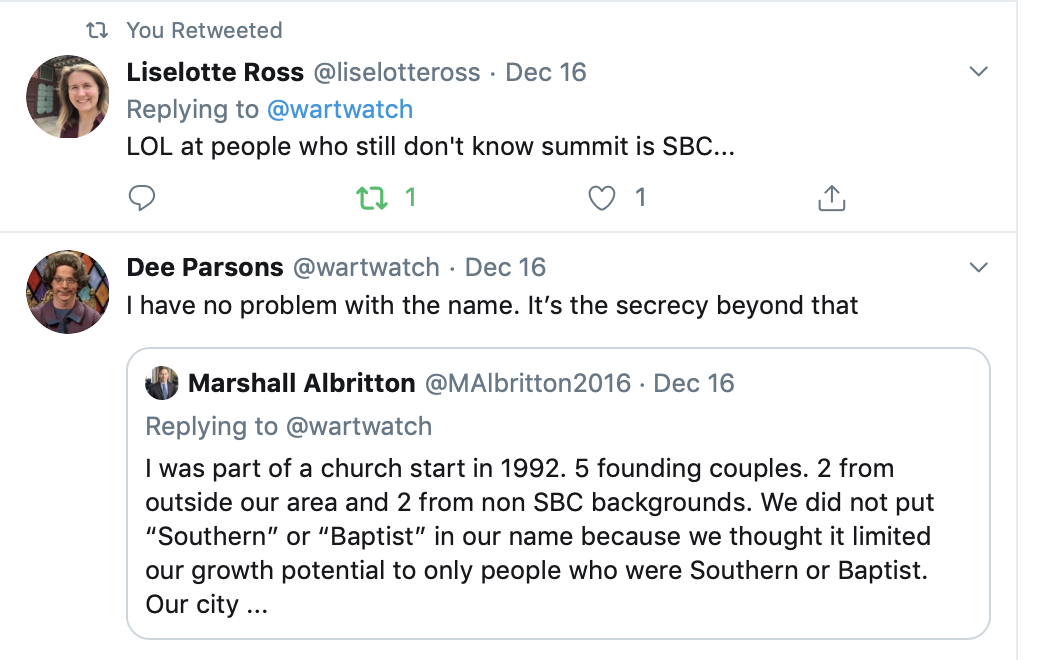 Some SBC churches appear to purposely conspire to keep their members in the dark.

As the day progressed, more people on Twitter checked the name of their church which they thought to be nondenominational and discovered that their church was actually a member of the SBC. I would love for readers at TWW to do the same.

Why do people appear angry when they discover that their church is covertly a member of the SBC?

Here are some possible thoughts.

I believe that the SBC has made a serious mistake. Taking the word *Baptist* out of the name of the church is not problematic. However, they should stop treating members of your churches like little babies who cannot handle the big boy and big girl truth that their church is a Baptist church. Frankly, there is far too much of “Trust us, we’re the leaders” going on in the SBC.

SBC-treat your members like big boys and big girls. Don’t play games. The fact that JD Greear needed to tell his congregation that they were actually members of the SBC is downright ridiculous. They should have known about this at the time they joined the church. And, if a church is afraid to tell people that their church is a member of the SBC, why in the world are they members of the SBC.