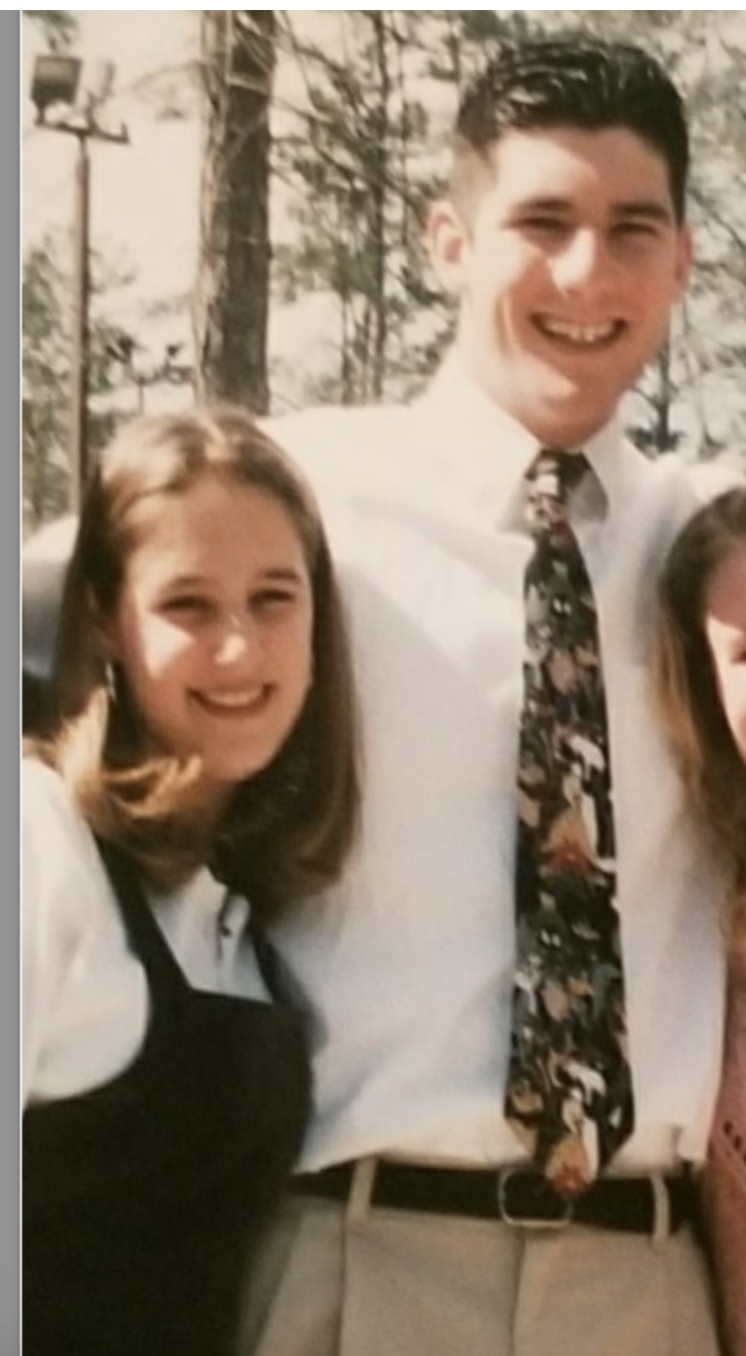 The conga line of disgraced pastors who think that God needs them to counsel the emotionally impoverished evangelical population has now grown longer. Andy Savage has joined the dances, giggling along with the likes of Tullian Tchividjian and Pete Wilson.

In January 2018, I wrote Jules Woodson’s story along with Amy Smith.I was disturbed and angry by what transpired at the hands of Andy Savage and the leaders and members of her former church. During that time, I wrote as a new acquaintance of Jules. Today, I write this as her dear friend. So, if Andy Savage is reading this, he needs to know that not only do I believe her, but I will stand on her side.

As many of you know, Amy Smith, Kenny Stubblefield, Brooks Hanson and I were involved in the initial conversations with Jules. Amy Smith and I both wrote posts on her molestation by Savage which attracted international attention. Then, Savage’s former church vaulted this story further into the public eye when they gave Savage a standing ovation after he admitted that he had a sexual experience with Jules….Well, he actually called it a *mutual organic experience*  but most people called it what it was: nonconsensual molestation. (The only thing organic that a youth pastor should share with a student is a salad.)

Andy Savage is disqualified from the pastorate for a number of reasons. He molested Jules Woodson, moved on, forgot about her, and then ignored her 20 years later.

How does one judge another’s character? Perhaps this quote sums it up:

“The true test of a man’s character is what he does when no one is watching.”― John Wooden

I think Savage was hoping that if he ignored her, everyone else would. Now let’s fill in some blanks.

Amy Smith broke the story that Andy Savage is starting a new church in Memphis! 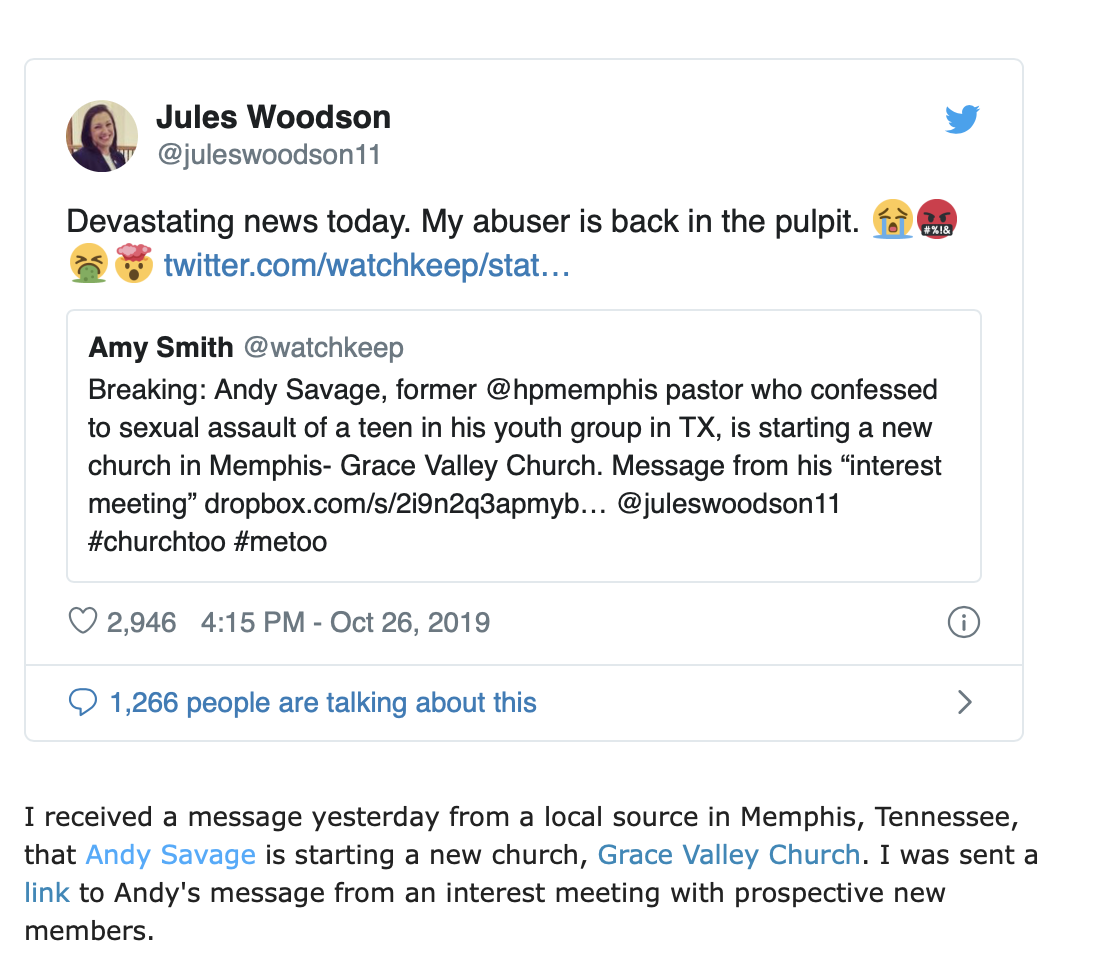 Here is the link to his sermon.

Here are some things that I heard.

In this sermon, he showed, once again, why he should not be a pastor.

Savage doesn’t discuss the fact that most youth pastors have never assaulted teens in youth programs.(Although, I’ve recently wonder just how high those stats are.) In fact, few of us have ever assaulted anyone. So don’t try to sin level your molestation onto the backs of the rest of us, Savage.

This story is getting around. I hope Andy Savage is ready *not to care* what the media writes about him. This thing could get big, once again.

In the recording he says, “It’s not hard to find out what I’ve done wrong. Just Google my name, it’s out there. It’s not hard to figure it out. And here’s the thing, we all have our story. Mine just got national news coverage.”

Reached by phone, Savage did not want to comment.

A website being shared for Grace Valley Church contains a form asking for contact information, family details, prayer requests, comments and questions. According to Google Forms, the form was created inside andysavage.com, Savage’s website.

Woodson said that it almost sounds like Savage makes light of her sexual assault in the audio recording — treating it like a “story” that everyone has.

“Not everybody sexually assaulted a minor under their care,” Woodson said. “Had Andy taught me science instead of religion, he would be in jail and he would never be allowed back in that workplace.”

…The case became an example of the #metoo and #churchtoo movements.

Now, Woodson says that she’s not denying Savage a normal life — nor is she denying him forgiveness and God’s grace.

“Devastating news today. My abuser is back in the pulpit,” Savage’s victim Jules Woodson announced in a tweet Saturday. Her message also shared a tweet from Amy Smith, a sexual abuse survivor advocate, which included a recording of a recent sermon from Savage preaching at his new Grace Valley Church in Memphis, Tennessee. The website for the church is now just collecting information from potential members through a Google form.

“Jules, I can’t imagine how devastating that must be. I am so sorry,” Moore tweeted at Woodson’s announcement.

“Thank you Beth. I am heartbroken and angry. Jesus weeps,” Savage’s victim replied. Moore responded: “Yes, He does, Darling.” 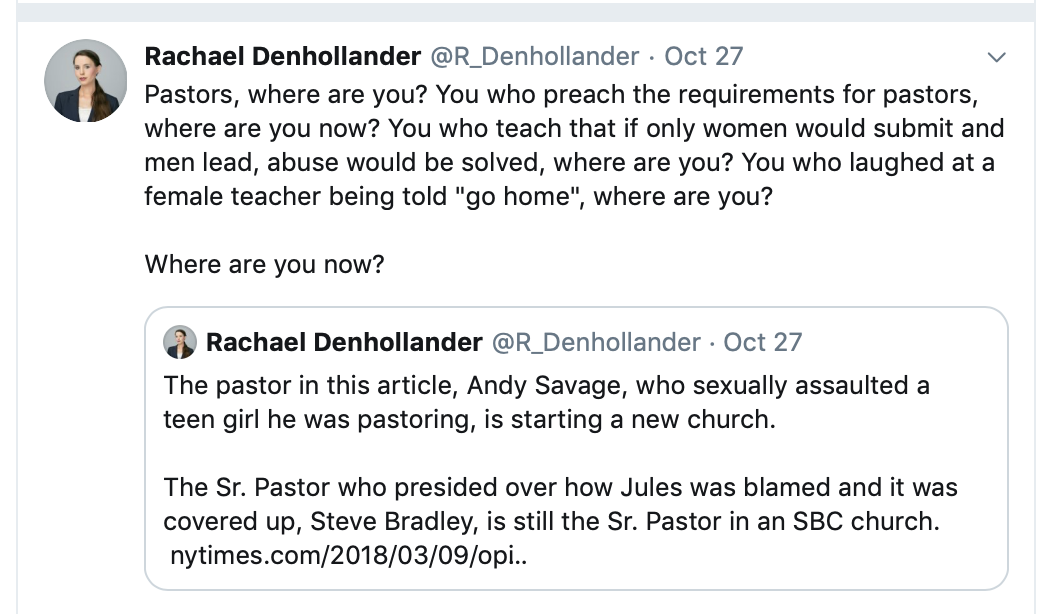 Pastor Andy Savage, Who Assaulted a Teen Girl, Is Starting a New Church

I am a Lutheran and I believe in grace. I also believe that we are all sinners. Luther said it well: “Simul justus et peccator.” Christians are simultaneously sinners and righteous. As another pastor said: We are positionally holy but we are functionally sinners.”

Folks, this means that sins have consequences. Some sins are also crimes. I hear lots of Christians claiming that we should show grace to Savage but few of these same people would ignore the thief who broke into their home and trashed it. They would be in court, asking for the maximum sentence, while claiming they are praying for the thief’s salvation.

What does restoration mean?

Poorly educated Christians who listen to light sermons, like those I think Savage preaches, think it means someone like Andy is forgiven and can jump right back into teaching because he “knows he is a teacher.” No consequences…except, there are always consequences. There are actions that we take in life that will permanently disqualify us from our positions. Counselors:having sex with patients…Teachers: Having sex with students…EMTs: having sex with those they are called in to help.

But far too many people believe Savage should get a pass for molesting Jules. Why? It makes no sense. What does restoration really mean? It means you can now return to church and be a church member. A former pastor doesn’t get to jump from sin to the pastorate. A real pastor who gets this would not try to do so. Grace is costly, not cheap. You must lose something. God can redeem it in a new work. For example, why not become a prison chaplain?

Why in the world would Andy Savage choose Memphis to start his new church?

I don’t know if this info is true but I heard from 3 sources that Savage may have approached his former church about a job. Could someone confirm or negate this?

If Savage was an example of a true slave of the Christian body, one who willingly humbles himself, he should go somewhere else. I wonder why he claims he is  *called to teach* in Memphis as opposed to Niger, the world’s most impoverish country. Why is he returning to the place in which he lost his church? Why is he returning for people to dredge up all the old memories? But, like he says in that sermon, he doesn’t really care what anyone thinks except for maybe *Bob on a bike.* (But if Bob doesn’t play ball, Bob may get pushed off his bike.)

I think he says that he believes he’s a teacher in a rich community because:

The evil Savage savages are already starting their attacks on Jules with nary a word from Andy or *Bob on a bike.*

Today, I became incensed when a man on Twitter began going after Jules, making claims that she was a party girl when she was a teen. I told him his Jezebel routine was abusive and decided to report his tweet to Twitter. I encouraged others to do so. It appears it worked. His tweet is no longer available. Here is a link to the thread of others who reported it. 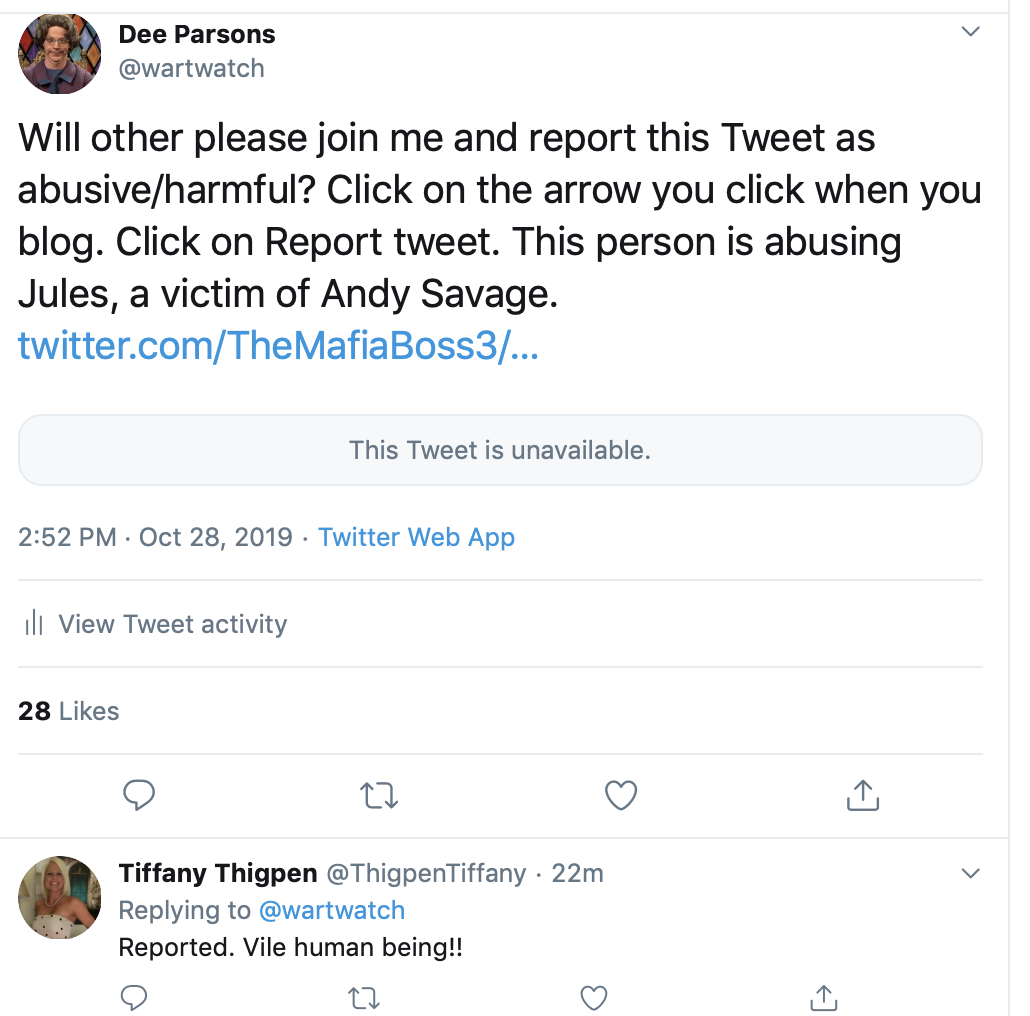 Finally, this time around I will watch for each and every cry of slander, King David was forgiven, cheap grace and cheap repentance. These poor people exhibit to me what rotten Bible teachers there are out there. Perhaps one of those rotten teachers is the guy who claims he is *a teacher.*

Andy Savage, go to the poor and be a slave instead of dancing the conga with the rest of the discredited men.

For those of you who are interested in learning about what one Pastor had to say about Tullian Tchividjian and cheap forgiveness, here is a link to Great Stuff – Gottesdienst – Real Sin. Real Forgiveness. Real Faith. Real Fruits of Repentance.

(PS I have some pictures and bios of *Bob on the bike.* I may give him a call before I post them.)