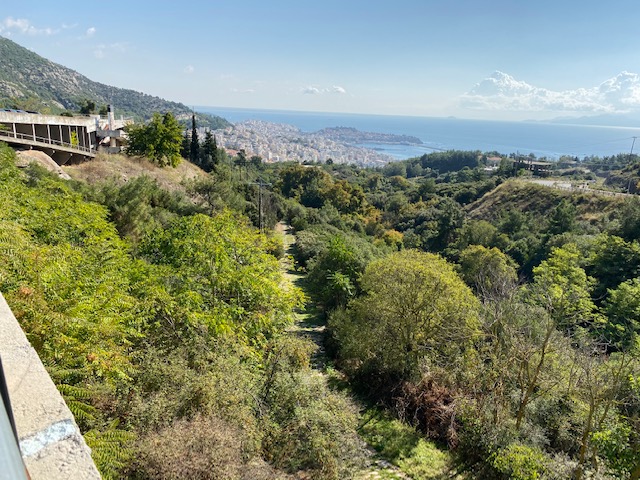 The Via Egnatia with the port of Neapolis in the background:

“It’s a dangerous business, Frodo, going out your door. You step onto the road, and if you don’t keep your feet, there’s no knowing where you might be swept off to.” JRR Tolkien: Lord of the Rings.

The road to Philippi

In the coming weeks, I am going to try to throw in some scenes from my trip to Greece “In the Footsteps of Paul.” This was another inspirational trip as our tour followed the journeys of Paul. We spent just a few hours at each stop, unlike Paul who spent months and years in some locations. Throughout the course of out trip, I felt I was doing a walk through the Bible. We visited Thessalonikki (think Thessalonians) which is the second biggest city in Greece (well, actually Macedonia which is part of Greece.) Athens, also one of our stops, is the largest. We visited Corinth, Philippi, Berea (Veria), Ephesus, Mars Hill in Athens and the Isle of Patmos along with a bunch of other places.

I was surprised by the number of Christian groups from all over the world, who seemed to be stopping at the same places we visited. It’s’ actually quite fascinating to hear priests, pastors and Greek tour guides explaining the sites in every conceivable language. I particularly liked meeting people who considered themselves on a pilgrimage of sorts. All races, countries and ethnicities were present. In some respects, this was the most affirming part of our journey. I had the same reaction when I toured Israel in January. Yes, I know that all languages and people make up the body but it is somehow moving to actually experience it

It is not necessary to take a tour like this to be a deeply committed Christian. However, I’m grateful for the experience. I can now picture these places in my mind a bit more clearly. I guess the thing that impressed me the most is how important these cities were in the days of Paul. Somehow, they seemed bigger to me after I saw them. This area is beautiful. The Aegean Sea is a stunning blue color that is different than the blue of the Atlantic or Pacific Ocean-at least in the coastal areas of the US. The weather is nice and the area produces all kinds of fruits and vegetable as well as an abundance of fish.

The picture at the top of the post was most meaningful to me. In the background, you can see the port at Neapolis. It is thought that Paul landed here to begin his journey to Philippi which was about 10 miles away.

It was the seaport of Philippi, and was the first point in Europe at which Paul and his companions landed; from Troas they had sailed direct to Samothrace, and on the next day reached Neapolis (Acts 16:11). Paul probably passed through the town again on his second visit to Macedonia (Acts 20:1), and he certainly must have embarked there on his last journey from Philippi to Troas, which occupied 5 days (Acts 20:6).

If you look carefully in the middle of the picture you will see a path. If you are present in the area, you can look down on the overgrown path and see some ancient stones that were part of the road system. This path is known as the Via Egnatia.This road was constructed by the Romans in the 2nd century BC. Little did the Romans know that their impressive roads would one day be used to spread the Gospel.

The road was used by the Apostle Paul on his second missionary journey as he traveled from Philippi to Thessalonica (Acts 16-17). It also played a vital role in several key moments in Roman history: the armies of Julius Caesar and Pompey marched along the Via Egnatia during Caesar’s civil war, and during the Liberators’ civil war Mark Antony and Octavian pursued Cassius and Brutus along the Via Egnatia to their fateful meeting at the Battle of Philippi.

There was something about this view that captured my attention. I pictured Paul, slinging his sack over his shoulder. (I wonder if he brought along one of his tents?) and beginning the trek to Philippi. It’s hard to imagine what went through his head. While standing there, I was surrounded by Christians. Yet, he was going to introduce the Gospel for the first time to a culture that was deeply steeped in the Greek and Roman gods.

We packed up the bus and headed to Philippi in a more expeditious manner than Paul. That is a story for another day.

For the rest of the trip, my mind kept returning to this place. Even now, I still get somewhat emotional as I think about Paul on this once busy road, ready to bring this faith to a culture who knew little to nothing about it.

It is articles like this one, as well as those by Todd Benkert, that continue to give me hope that viewpoints in the SBC are changing. I know one might say “Well, Dee, don’t you think the Caring Well conference showed that?” My answer is, “No.” One thing I learned in my years in the SBC is that Baptist leaders are really good at the showy stuff and not so good at the hard work that’s involved in making sure that changes can be made.  Add to that history, the fact that the leaders for the Caring Wall conference seemingly ignored some victims whose stories are very well known or who have been fighting abuse in the SBC for years. Two examples are Christa Brown and Tiffany Thigpen. It is truly beyond imagining why this happened.

Add to that the reality that the SBC isn’t really a denomination since every church is independent from the Mothership and I worry about just how far changes can be implemented.This point was brought up in the discussion section under the post. The commenter makes a good point about the realities of the situation. That is one reason that I find myself in the Lutheran church which has denominational control.

SBC Voices has been giving voice to those who have been forgotten as well as defining issues that have not been discussed.

It’s when I suspect that the people in the rank and file are paying attention that I develop hope for the long term. I have been so impressed by some of the folks posting at SBC Voices. They are saying things that make me realize that change is happening inside. So, as I get discouraged by the leadership in the SBC and the foot dragging by the EC, I realize that things are changing in the ranks and that is a good sign.

Read the post by Todd Benkert that I wrote just before I left on vacation. Tiffany Thigpen called me to let me know how grateful she was for that post. She said that she felt she had been forgotten and how those of us who have been mentioning her situation have given her so much hope. I let Todd know that she was grateful for his post. Since that time, he has been continuing his support for those who had been forgotten, something that did not happen with Caring Well.

William Thornton continues to surprise me with his insights on some of the matters important to me and the readers at TWW. It is particularly touching to me because I wasn’t so sure how those who write for SBC Voices viewed what I had been saying over the past number  of years.

So, here are some insights in this post: Not gone unnoticed: The complementarianismness mess, CaringWell/abuse, hanging around past your shelf life…and bacon, brethren.

He asks a bold question: “Is the word complementarianism the hill the SBC wants to die on?”

The definitive, succinct, 319 word piece that declared “complementarianism” not to be worth diddly-squat any more. Southern Baptists love adjectives and thus will flood the comp market with them: hard, soft, broad, narrow, traditional, etc

He recognizes that the of us who advocate for abuse victims do not do so to gain financially from our work.

I know I’m making an assumption that he includes me in this group!

I’m satisfied as to the righteous motives of the most visible and active of the loose confederation of victims of abuse, and their advocates, in SBC churches and related institutions.

He recognizes that some are proposing that the SBC provide resources to those who have victimized in SBC church. He even used the word *reparations.* (Please read the entire post.)

Part of the proposal by professors Whitfield and Yarnell is that “the Southern Baptist Convention, through the Executive Committee, should develop a fund to help when the resources of a church are not sufficient or when a church fails to provide reasonable support to a survivor.” This is a serious proposal. I have not seen our current leadership address anything like this

In this point, Thornton is referring to this post in the Biblical Recorder: Addressing abuse in the SBC: A proposal written by Malcolm Yarnell and Keith Whitfield, professors at SEBTS.

For far too long, too many among us have demonstrated negligence when dealing with the horror of abuse. Rather than shaming the little ones whom God calls his own, we must now welcome and encourage these victims, these survivors, to speak. And we must prepare our hearts to listen to every word, to grieve over every wound, and to repent of every wicked deed. If we refuse to follow the way of Christ, we may no longer claim to be the people of Christ.

Recently, Whitfield outlined five systemic factors behind the cultural practices that foster acts of abuse. These systemic factors painfully confirm to our consciences that we have not yet honored “the full dignity of every human being.” Our family of churches must address these factors in part by creating significant mechanisms to help prevent abuse within our churches and denominational entities.

Here is this groundbreaking proposal. Please be sure to read their entire proposal.

Local churches and state conventions should be strongly encouraged, and Southern Baptist entities should be required to have measures in place to cover legal fees and counseling expenses for anyone abused by a leader or a volunteer in their ministry.

In addition to these funds, the Southern Baptist Convention, through the Executive Committee, should develop a fund to help when the resources of a church are not sufficient or when a church fails to provide reasonable support to a survivor.

Finally, Thornton gives his opinion of the John MacArthur dustup which made me smile.

Speaking of shelf life. It’s not good to hang around after your shelf life has obviously ended. Two words here: John MacArthur. Ride your Harley, bro, and enjoy life.

I know that I can speak fro some of the victims by thanking William Thornton for his great post. I have been writing for over 10 years. Two years ago, I would not have predicted this response from rank and file pastors in the SBC. Awesome!