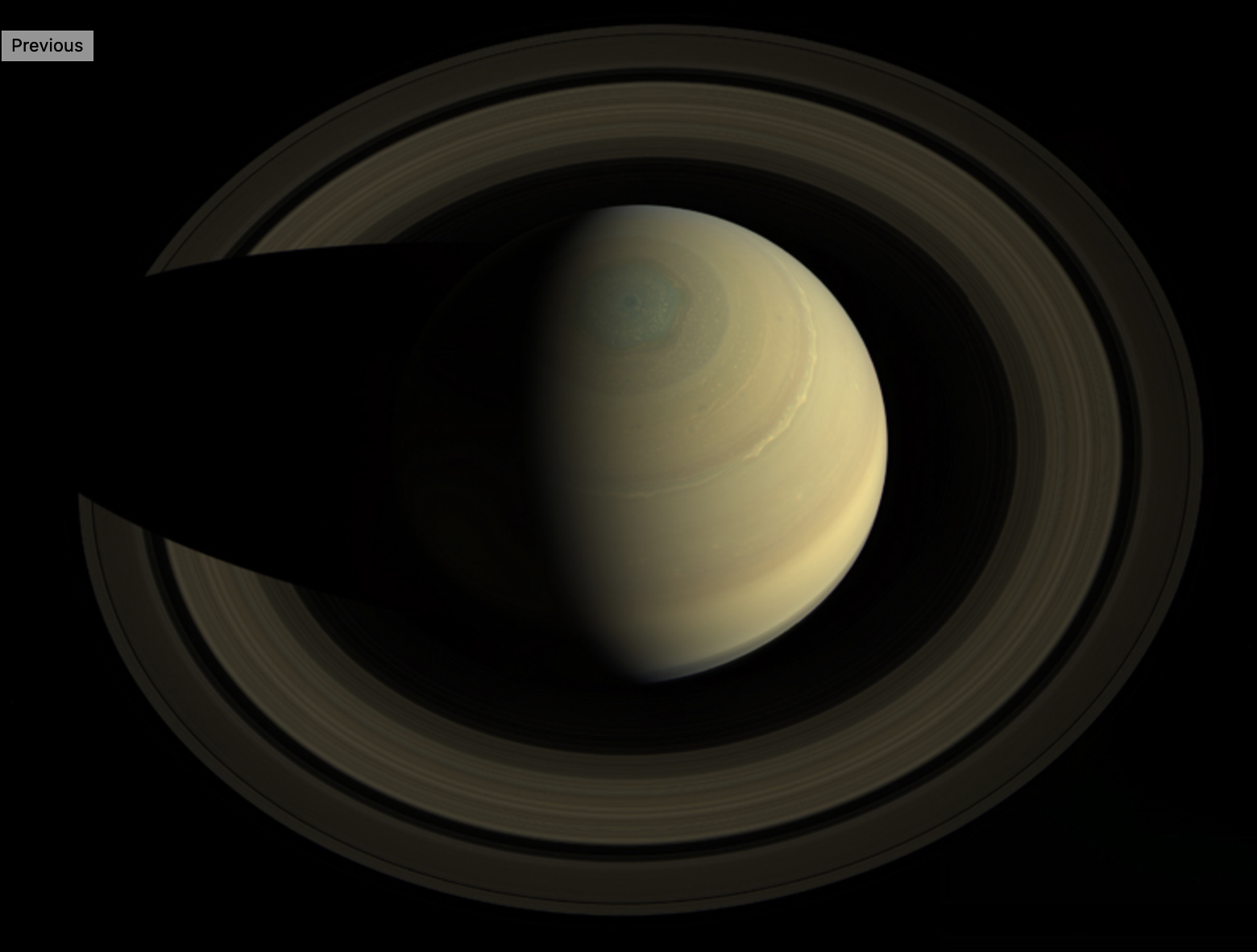 Jewel of the Solar System NASA

“You and I, Sam, are still stuck in the worst places of the story, and it is all too likely that some will say at this point: ‘Shut the book now, Dad; we don’t want to read any more.” JRR Tolkien: Lord of the Rongs

When we last left Dustin Boles, he had resigned from Mosaic Church and was attempting to buy a house in the same neighborhood of the woman who said he had been stalking her. He had decided to start a website called True Skeptic and started working for a laboratory company. There was also some talk about helping him undergo *restoration*(whatever that means) in another church.

Here is a link to his Facebook video announcement.

Here is a link to Vintage Church on Facebook.

Here is a screen shot of his announcement on Facebook. 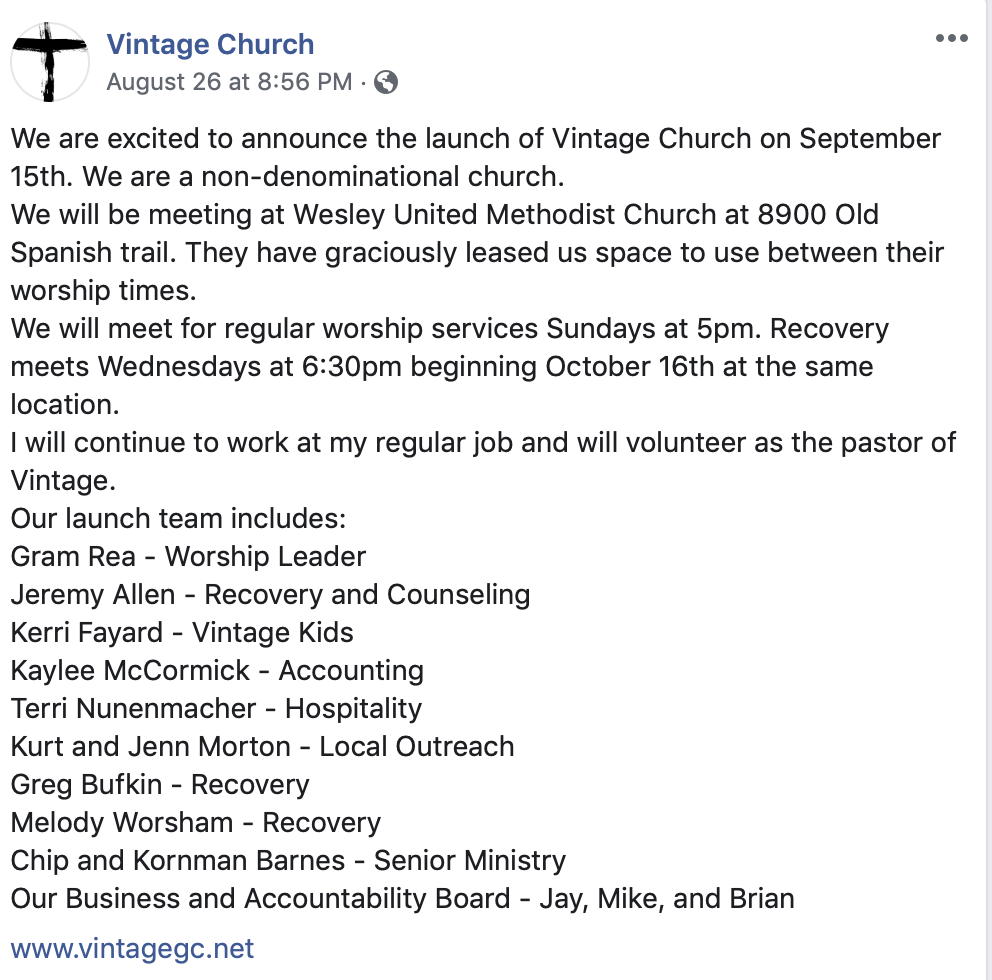 This is his explanation why he is starting this church.

Why am I so worried about this?

Here is how he describes himself on the new Vintage Church website.

There appears to be no mention of his stellar fall from the pastorate a few years back. There is no mention about why he decided that now was the time to lead a new church. There is no mention that he has received any sort of real counseling. There is now discussion of how things worked out with the lady who made a police report. It looks to me like he is simply *going on.*

Something doesn’t smell right here. I will report when I learn more.

A review of the backstory of Dustin Boles in 2016.

The Allegations Against Dustin Boles Former Pastor of the Acts 29 Affiliated Mosaic Church.

In this post, I cover Boles’ resignation from the Acts 29 Mosaic Church. A church members allegedly witnessed inappropriate behavior on the part of Boles with other women. He resigned from his position and began working for Avix Labs. Both Boles and his wife made comments on the Facebook page of one of the women who was allegedly hurt by Boles. Boles accused her of assaulting him in an Uber car while he denies assaulting anyone.

In this post, you will see a letter sent from Boles to the the church staff. In this letter, he claims to be a deist and also says he had no plans to return to church ministry. He says he had started a website called True Skeptic.

Spiritually I have struggled and felt mostly mostly like a deist (believe in God just not His involvement in creation – Thomas Jefferson, Thomas Paine, Voltaire, Etc.) I am not a deist but have felt like one. I am working through it all but I am even more skeptical of faith than I was before.

I have absolutely no plans to ever return to church ministry. That could change one day but I seriously doubt it. I will likely do some type of teaching ministry way down the road that mainly is web based. My opening series will be called “Epic Fail”. Ha. I have been offered the opportunity to go through a “restoration” process with ARC and Oasis church beginning in January but I may or may not do it since it is geared toward church ministry and that is just not my interest. I am also starting a skeptics web site called True Skeptic

In this post, you can also read the resignation letter from Boles and the church leadership in which the accusations against Boles were confirmed by the leadership.

Sorrowfully, we need to share with you some very disheartening news. In recent days, serious allegations of pastoral misconduct arose against Pastor Dustin Boles and were quickly confirmed by our elders. This required that the elders begin a formal process of thorough investigation. The findings of this investigation and further confession from Pastor Dustin has led us to the heart-breaking decision to accept Pastor Dustin’s resignation from office at Mosaic Church and president of Mosaic Ministries effective immediately. We did not arrive at this decision lightly but rather agonizingly, with deep consternation for our brother, praying diligently together and seeking scripture for guidance.

The initial and now confirmed accusations violated the high standard of personal conduct for elders and pastors of the church. (I Timothy 3:2). Please understand that we are not withholding details to protect Dustin. We are protecting those who were hurt by his sin.

have struggled with sin all my life and have won the battle many times. But, now I have lost in significant ways that have hurt some families and innocent people. I have also hurt Natalie and my family. My sins are in direct violation of scripture and the covenant I made with Natalie in marriage. I have no excuse for what I have done. Each sin was selfish, prideful and cannot be justified.

I ask for your forgiveness and that you would pray for Nat and me and the whole Mosaic Family.  I will be in an indefinite period of repentance and healing as God works on my heart and mind. I will always feel that being your pastor has been one of the great privileges of my life. Our elders have been gracious and kind to me and will make the right decisions along the way and for the good of the church, the good of those I have hurt, and for the good of me and my family.

Why Is Dustin Boles Moving Into a House Near His Alleged Victim?

This is rather odd, especially since it seems Boles’ son would be in the same school as some of his victims.

It has come to our attention that Dustin Boles and his wife are allegedly moving a couple of doors down  several houses (correction)away  from one of his victims. His child will switch schools and be in the same school as a couple of Boles’ alleged victims’ children. Here is what he said to the Mosaic Church in the letter posted yesterday.

(Boles wrote:)We are currently selling our house and getting tons of interest. We are hoping to sell it soon at full asking price. We already have a house locked in to lease just a half mile away in the Promenade neighborhood in OS. Half the price of our mortgage and a lot bigger house! (By the way, if you ever plan on failing epically like I did make sure you have your FPU crap together first. It really helps.

Note that he does not mention the proximity to one of his victims. TWW finds this behavior on the part of both Boles and his wife disconcerting. This appears to demonstrate an utter lack of concern for the alleged victim as well as his own family.

Here is one part of the report. You can see the whole thing on the original post. 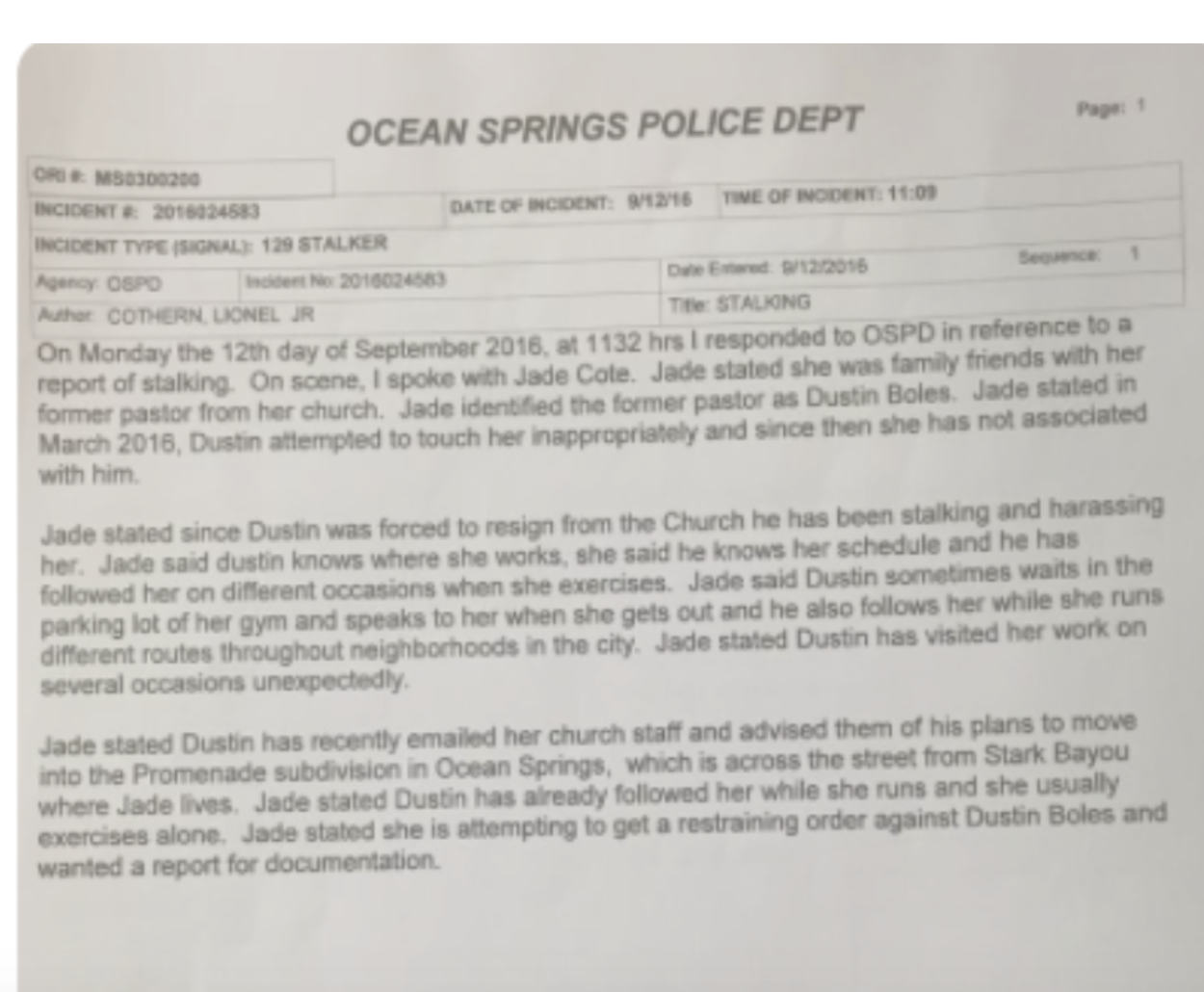 This post covered Boles’ website TrueSkeptic.com which no longer exists. However, it got some great screen shots so we can see what he was thinking about back then. The following is from that post.

1. A new website called True Skeptic was set up and it allegedly belongs to Dustin Boles.

As people allegedly began to contact Dustin Boles about this website, it was removed. However, if one searches Google this entry comes up, even though the link no longer works. 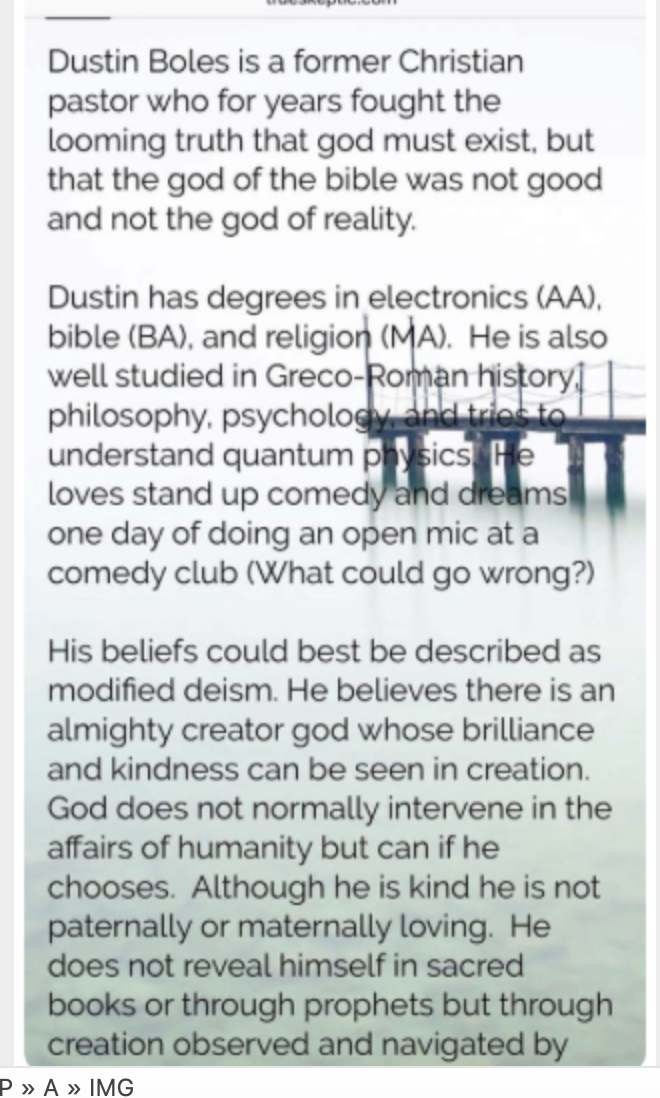 3. Dustin Boles seems to be setting up a skeptic speaking and debating *ministry.*

4. His coming book blurb appears to claim god is a deadbeat dad. 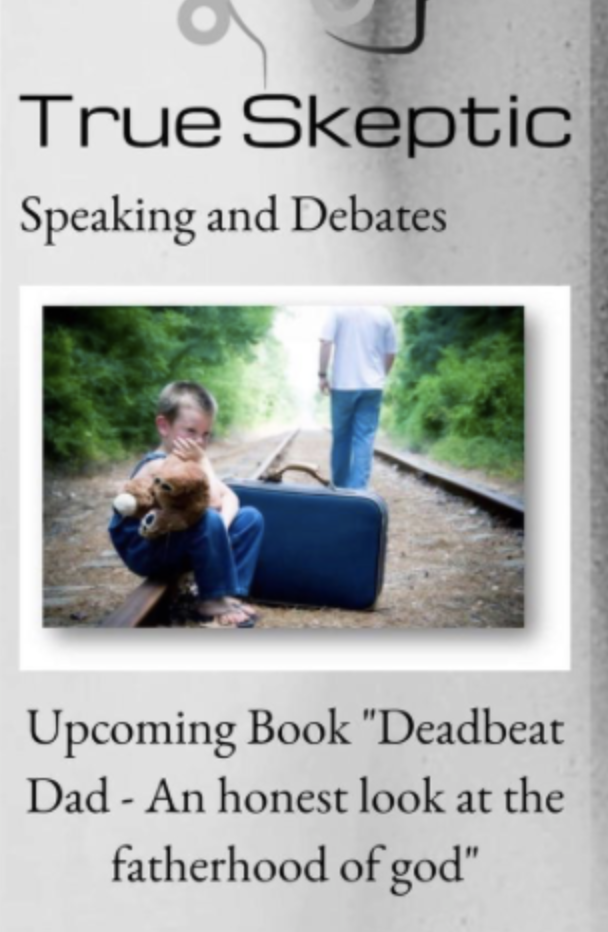 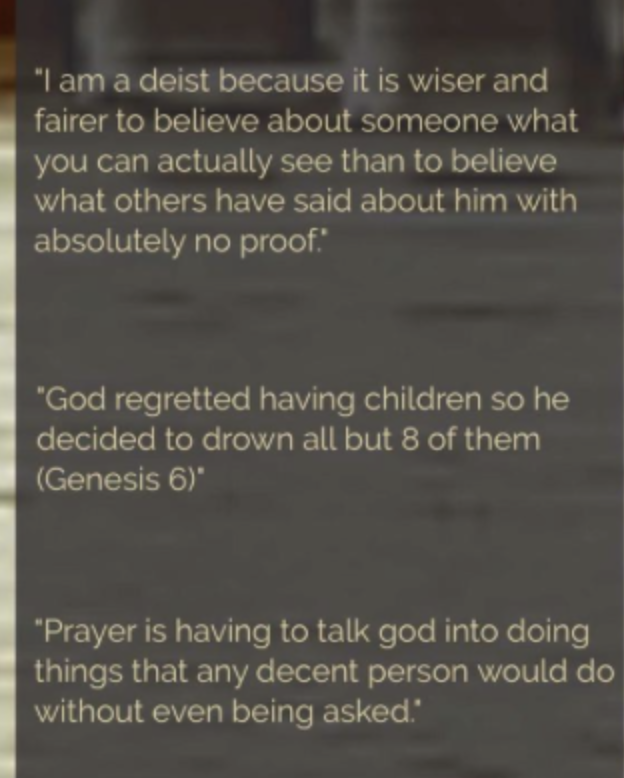 5. He seems to have some serious issues regarding God’s relationship with mankind.

In discussing Boles and his former position as pastor with a member, I was told that he never expressed anything like this in any venue while pastor. Apparently, a number of people have contacted Boles about all of the above. He denied it was him but the website was promptly deleted. However, people who are in a position to know, claim that the website has been checked it out and it is registered to Dustin Boles.

Where does that leave me?

Someone needs to explain to me how a guy with this much baggage ends up starting a church 3 years later. Also, I’m starting to get really annoyed with Christians who blithely use the word *restoration.* It appears to imply that it is just fine for a guy who used his pulpit to have some weird *relationships* with women, including accusations of stalking, followed by a time as a resident skeptic, should get his pulpit back.

Let me state this loud and clear, restoration means restored to the body of Christ. In other words, he did something wrong, he needs to repent and then maybe he can become a communing member of a church fellowship again. Since when does restoration mean he gets to skip all of that stuff and go straight away into the pastorate. From what I can tell, Boles hasn’t repented in any visible way. And yes, his repentance needs to be visible since he hit rock bottom in a most visible way. He loved the public eye back then. He still does but he doesn’t want the public looking. to closely at his lifestyle.

Prediction: Hang on tight, Vintage Church. You are in for a ride. Whoops- almost forgot. His new church is in Ocean Springs, MS, where Mosaic Church is located. Kind of in your face, isn’t it?