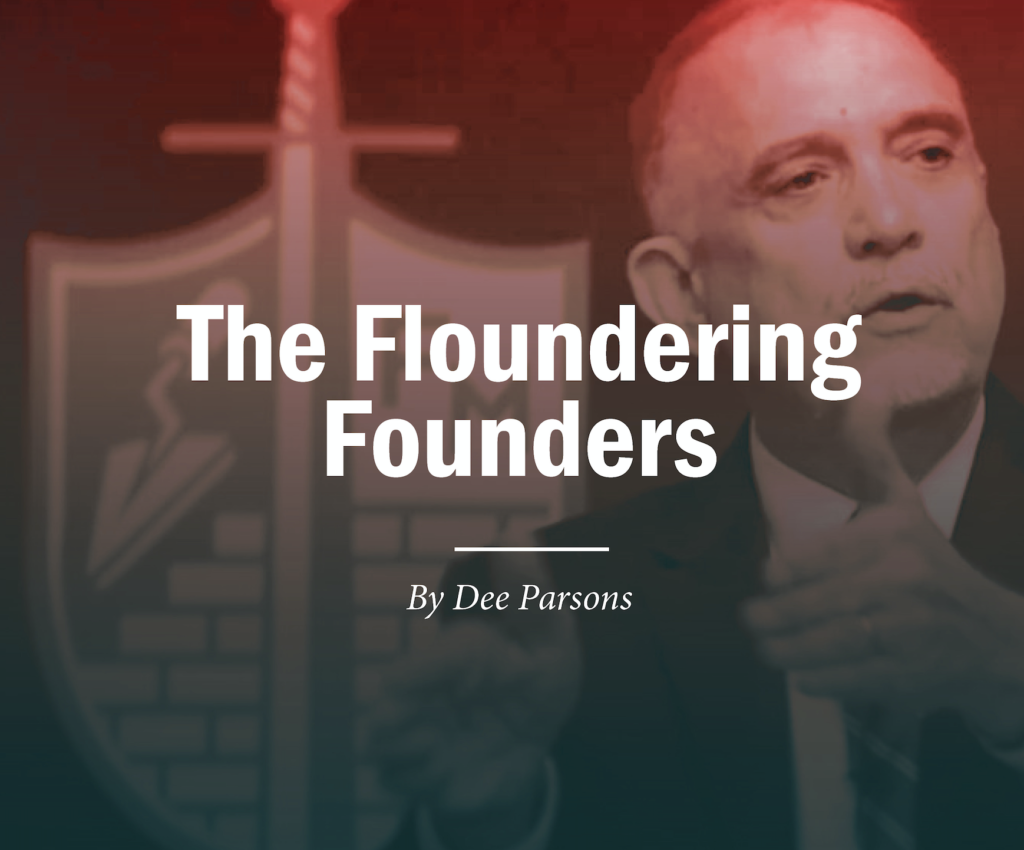 Who are the Founders?

I am going to tell you who I think they are. However, I will provide links so you can decide who you think they are. The Founders are a group of rabid Calvinists who have long hidden in the shadowlands of the SBC They have presented themselves as just good ole Calvinists who are simply Baptists in practice.They believe that all good Christians thought history have been Calvinists. Did you know that even Augustine was a kind of Calvinist?

The Founders describe themselves thusly.

Founders Ministries is committed to encouraging the recovery of the gospel and the biblical reformation of local churches. We believe that the biblical faith is inherently doctrinal, and we are therefore confessional in our convictions. We recognize the time-tested Second London Baptist Confession of Faith (1689) as a faithful summary of important biblical teachings and the abstract of that confession known as the Abstract of Principles.

Let me summarize what they think about those Christians who do not believe as the Founders believe.

They believe that they need to teach churches to see the full™ authority of God’s word and, up until this past week, it appears that the Calvinist Baptist boys arranged play dates.

In 1982, a group of men committed to the doctrines of grace met in Euless, Texas to think about, pray for and plan efforts to encourage church leaders not only to see the full authority of God’s Word but also to affirm its sufficiency in all matters of faith and practice. After spending the morning in prayer, plans for a conference were developed and the first Founders Conference was held in Memphis, Tennessee the next year. The conference met annually there for the first 8 years, moved to Birmingham, Alabama from 1991 to 2004, and was hosted by churches from in following years. Past speakers have included John MacArthur, J. I. Packer, Iain Murray, Al Mohler and John Piper. Themes have included missions, evangelism, revival, preaching, pastoral ministry, sanctification, the doctrines of grace, law and gospel and the church.

What do they mean by church reform?

The Founders and Southern Baptist Theological Seminary have long touted Andy Davis, FBC Durham, as the best case of church reform that they know.

By church reform they mean to remake the church in their image of Calvinism, no matter what it takes. This story is personal for me because I have two friends who were called *wicked* and *unregenerate* by Davis. He did not level with the church before he was hired and afterwards he *made it into his own image* of a Calvinist church. Andy Davis and First Baptist Durham: I Wonder If Wormwood Grinned?

Tis story is touted on Southern Seminary’s website as an example of exemplary church reform which to me mean *do whatever it takes to slip in the door and then lower the boom.* PS: It had nothing to do with expositional preaching and everything to do with *going to war.*

The Founder’s played games at SBC 2019

The Founders began filming and asked bizarre questions of several of the participants such as how they viewed women preachers and LGBT issues. Since these folks were there to discuss sex abuse in the SBC, these questions seemed out of place. I viewed them from a distance, recognizing Tom Ascol. I am seriously upset that they didn’t come to speak to me…

Rod D Martin, newest member of the SBC Executive Com, appears to make an appearance in the trailer from The Founders.

This was followed up by another Founders’ bot who attacked us on Twitter SBC Executive Committee Member Rod D. Martin Goes on the Attack on Twitter, Defending the Founders, Causing Concern Amongst Abuse Survivors.claiming we were only upset because we said some thing and they caught us saying them.

Here is an image from his Twitter account. Look at it closely. I believe you will see him again in the following Founders Trailer (3:00 minute mark) 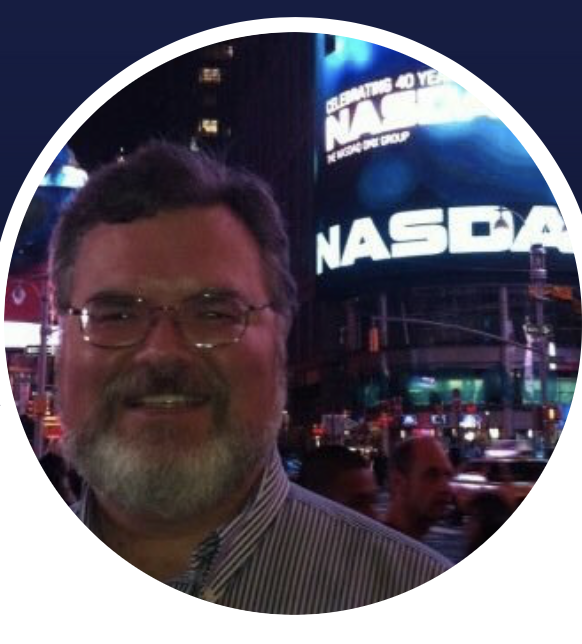 Which leads me to questions.

The Founders trailer gleefully kicked over a hornets nest.

There is no way to embed this video so here is the link to view the trailer. Before you begin, remember. They ticked off Papa Bear Mohler and friends and many, many others. 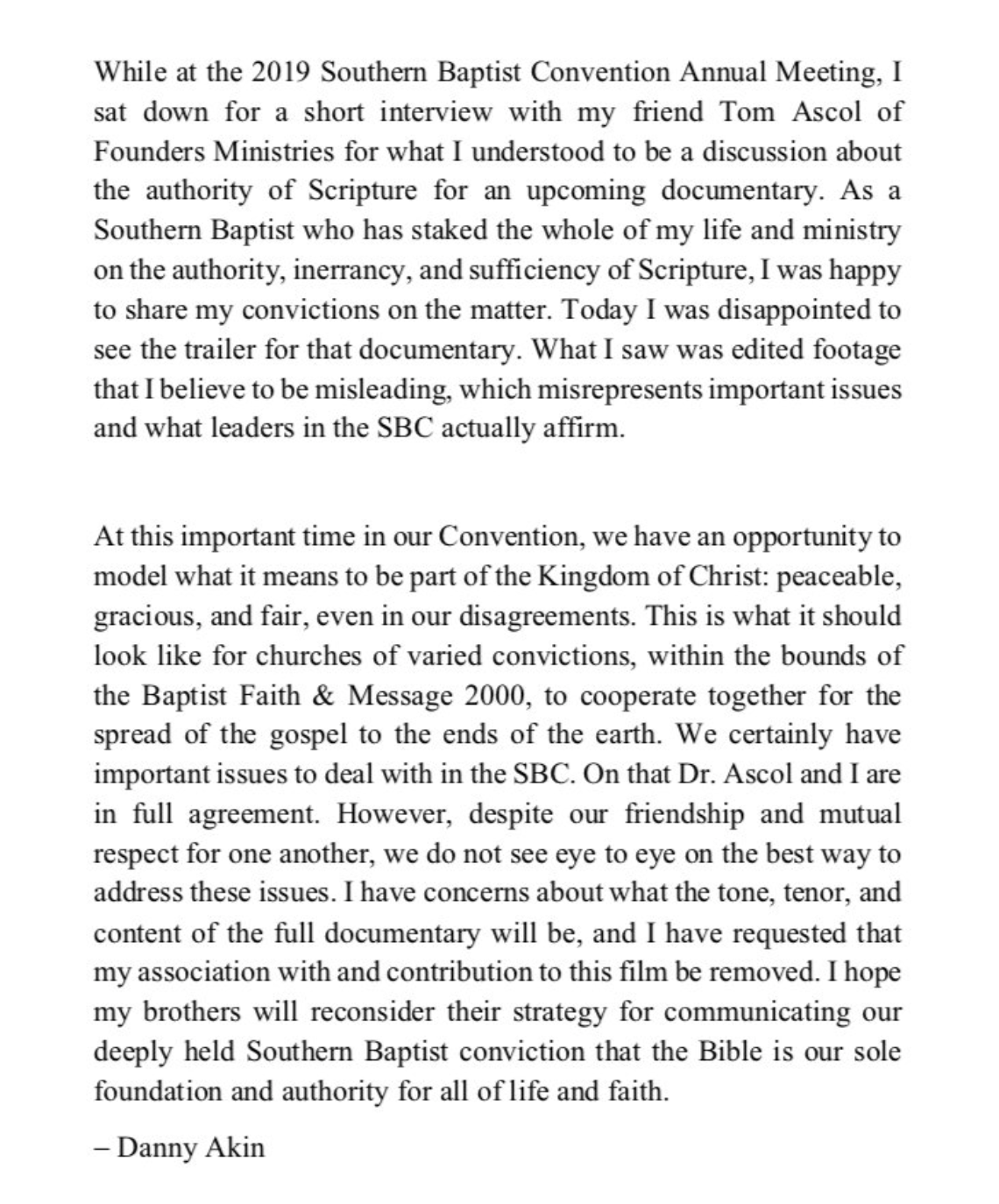 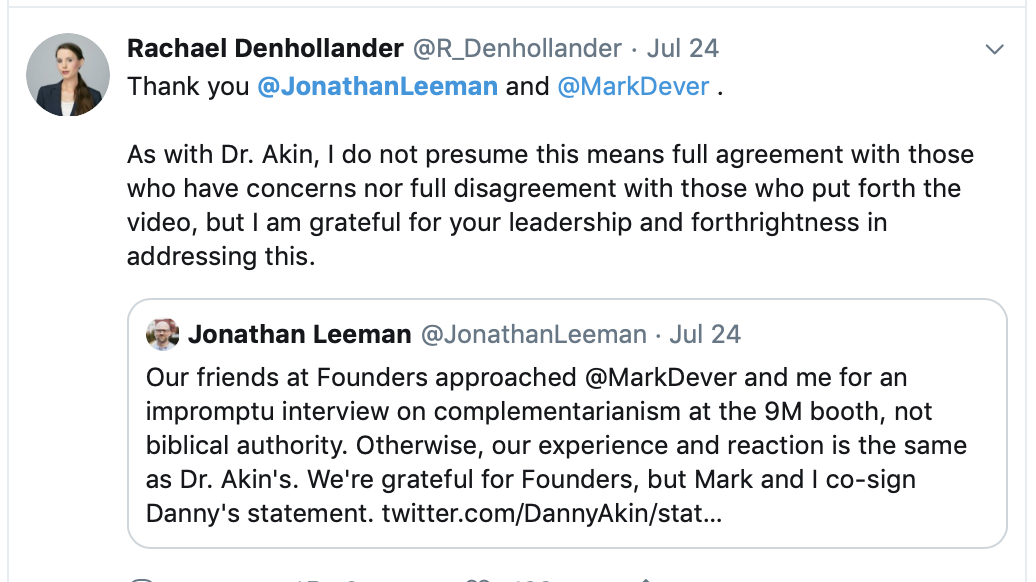 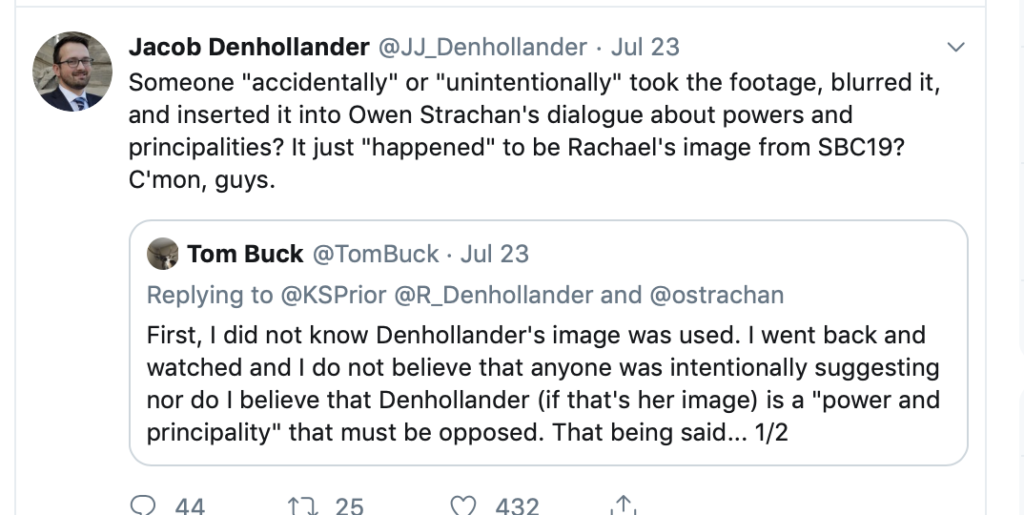 Doug Wilson who, of course, endorsed the film 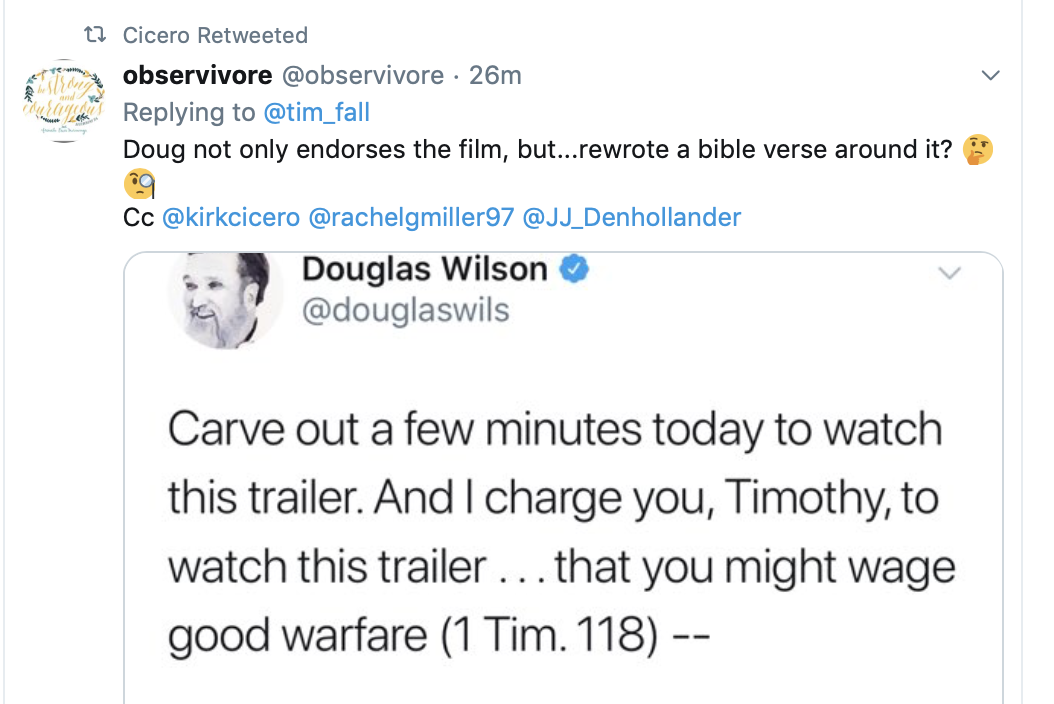 SBC Voices: The supreme irony of the year: Tom Ascol calls on the SBC for “deep seated repentance”

We’ve had the Rabid Cals for years, Ascol was a pretty decent spokesman for that segment of SBC life. Now, hopefully, the Rabid Cals have self-immolated.

The documentary, according to the Founders Ministries website, addresses “many unbiblical agendas … being advanced under the guise of honoring and protecting women, promoting racial reconciliation, and showing love and compassion to people experiencing sexual dysphoria.”

Twenty-five years after the Conservative Resurgence returned the SBC to “its historic commitments on the inerrancy and infallibility of Scripture,” the website states that “it seems like evangelicals, including Southern Baptists, are in danger of loosening their commitments to those basic, Christian commitments.”

A number of the clips highlighted in the video come from sessions and events that took place during the Southern Baptists’ annual meeting in June. They include part of a discussion on race in the church, featuring James Merritt, a Georgia megachurch pastor and former SBC president; a discussion about abuse; and a discussion of whether women can preach.

At several points, as leaders such as Merritt and megachurch pastor Matt Chandler are speaking, the video seems to glitch out, whereupon Ascol appears to give his warnings that their comments represent the infiltration of the church by social justice elements.

One such freeze occurs as Merritt, along with current SBC President J.D. Greear, urges Southern Baptists to listen to black evangelicals and Christians from other ethnic groups. Ascol responds: “This understanding is what causes so many who are moving in these circles, advocating these ideologies, to tell people in the hegemony that what they must do is sit down and be quiet and listen.”

Leave it to religious conservatives to see discussions about racism, abuse, and feminism taking place within their movement and act like the sky is falling.

The conversations angered Calvinists — the ones who believe in total depravity — so much that they issued a statement on how the “liberal” concept of social justice is apparently a threat to their beliefs.

Texas Baptist pastor Dwight McKissic, who has argued that women should be allowed to preach, is also featured in the video as is an image of Lutheran pastor and author Nadia Bolz-Weber.

He took to Twitter to criticize the video as well.

“Totally blindsided by this,” he tweeted. “Really disapprove of the message being sent here. Very divisive, unnecessary & unfortunate. I plan to ignore it from this point though. Kingdom work must take precedence over this bizarre attempt to sow discord among the brethren.”

The Founders ask if sex abuse or the Bible’s teaching about manhood is the more important issue.

They just can’t help themselves…Which is the most pressing issue in the SBC today? Sexual abuse or the Bible’s teaching about manhood?

First, true biblical manhood is part of the solution to sexual abuse

…Second, Feminism has been trying to leverage the sexual abuse of women to advance its unbiblical agenda.

….I am very thankful for the emphasis on sexual abuse at SBC 2019. In those matters where the prevailing cultural ethic agrees with the biblical ethic, Christians must never fail to proclaim and live in accordance with the teaching of the Bible, or else the world will rightly see us as hypocrites. But the harder thing to do is to speak to those biblical and ethical truths that the culture abhors, such as the Bible’s teaching on manhood and womanhood. The church can and must do both.

It looks like The Founders got one of their own appointed to the SBC Executive Committee. If this is the direction of the SBC, I would say that sex abuse will take a back seat to railing against social justice issues. They will also push of strict gender roles with women taking a back seat. Just look at how many women are featured on The Founders website. 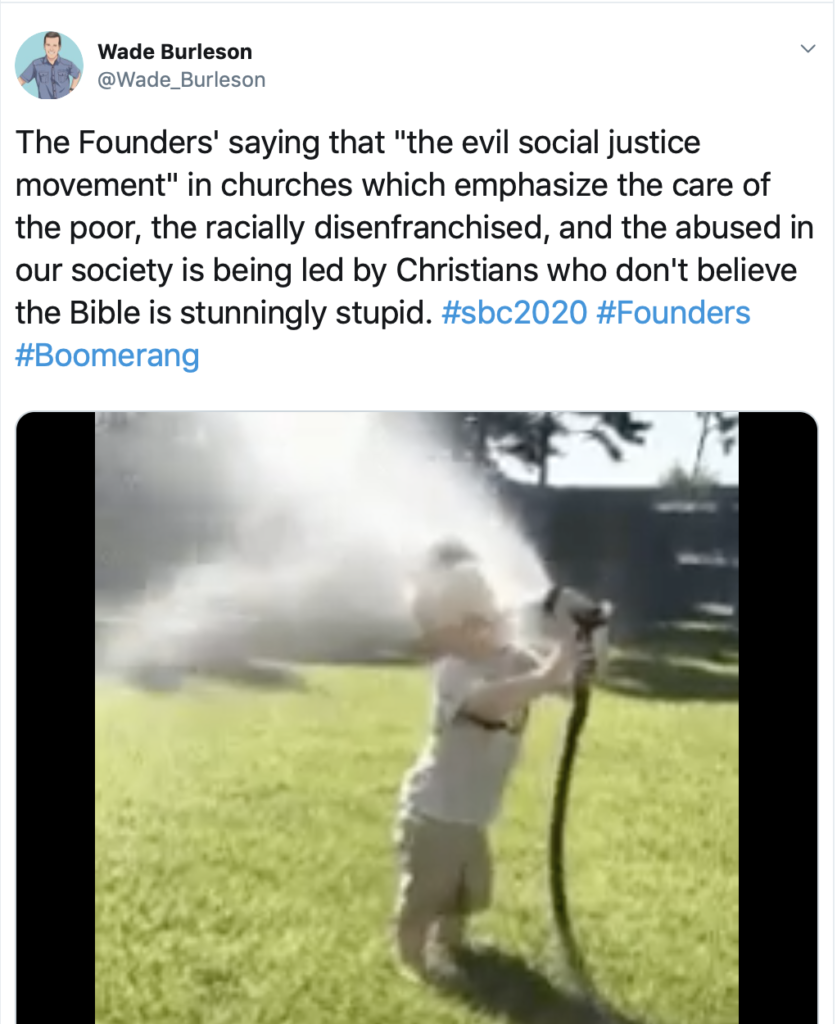 The Founders are doing what I predicted would happen years ago when I first started blogging. They will start to devour their own after they took are of what they would perceive to be liberals. Wormwood continues to grin and the feasting begins.