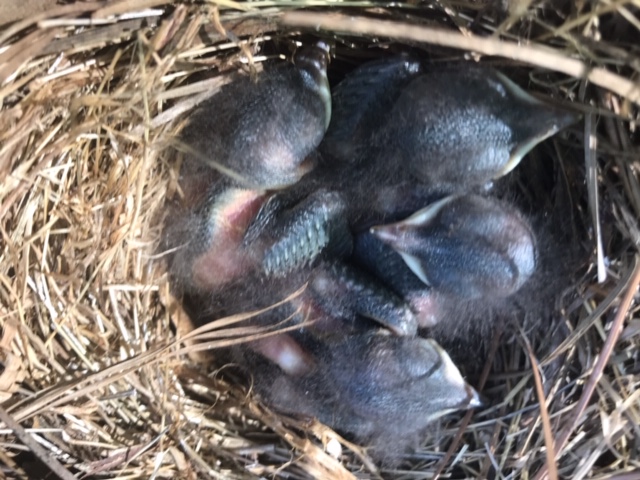 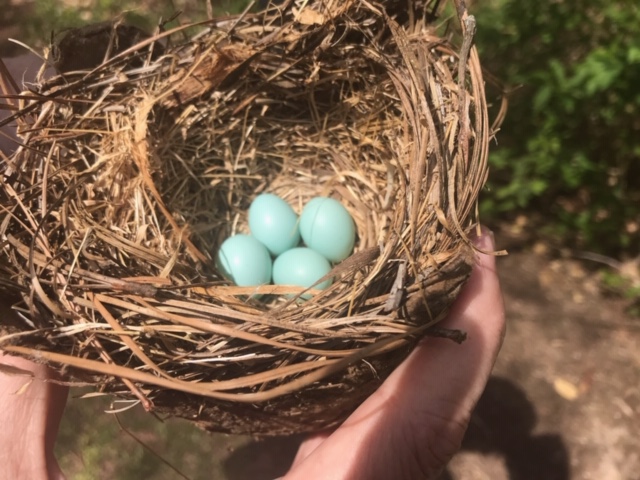 The bluebird babies are here and look healthy.

“Good Friday and Easter free us to think about other things far beyond our own personal fate, about the ultimate meaning of all life, suffering, and events; and we lay hold of a great hope.”   Dietrich Bonhoeffer

I will not be posting tomorrow. Beginning tonight, I shall attend Maundy Thursday service in which the altar is stripped bare until Easter. Tomorrow morning, I will participate in a live enactment of the Stations of the Cross at Duke Chapel. Tomorrow night there is a Good Friday service and then a Saturday Night Vigil at my Lutheran Church followed by Easter.

Years ago, my former SBC church did not observe any of these traditions except for Easter.  I volunteered to put together a Good Friday service for the church but it was nixed because my pastor said he was too tired to do that, A couple of years ago, I asked my Lutheran pastor if he was weary due to all of the various services the church provides during Holy Week. He said that it was his most favorite week of the year and he looked forward to it every year.

Blessings to all of you in the coming days.

I’ve been covering CJ Mahaney and his band of look alike churches and pastors for 10 years. TWW documented all of the allegations of the cover up of child sex abuse within those churches. Additionally, we’ve written a number of articles dealing with their rather odd theology and bizarre practices.

Mahaney and his boys were all the rage at one time, virtual mini-gods to groups such as The Gospel Coalition and followed by Al Mohler, Mark Dever, Ligon Duncan, JD Greear and many others too numerous to mention. Your adorable blog queen was treated rather poorly  by these dudebros, who claimed she was pathologically dishonest (Joe Carter) and others who called for divine retribution in the form of earthly lawsuits. I soldiered on and more and more folk began to realize the problems inherent in this system.

Then, the unthinkable happened. Papa Bear Al Mohler apologized for his shenanigans and ignorance when it came to this groups, claiming he could have sworn that Mahaney said there had been an independent, third party investigation. He was shocked™ when he found out that wasn’t true. Remember, Mohler is the smartest man on the planet according to CJ Mahaney. Or was Mahaney the smart one, successfully pulling the wool over the eyes of those who enjoyed his antics and donations?

Papa Bear apparently dumped Mahaney like a hot potato Ain the wake of the Houston Chronicle SBC expose.He said that SGC should do a third party investigation. Moher’s baby bears have stayed uncharacteristically quiet, caught between a rock and hard place. It is my opinion that all of these *real men* should give up their Pampers and apologize like big boys but I’m doubtful it will happen. Being a member of the Calvinista set means allowing Papa Bear to apologize for you.

Papa Bear threw Mahaney and his churches under the bus, finally. And it appears that the SGM/SGC crowd is not taking his advice.

Their response can be summed up succinctly by that rather crude term …they flipped the bird at the evangelical world, essentially sticking out their proverbial tongues and saying, “Make us!” Here is a quick summary of their points of view. Please read the entire article so they won’t say that Dee doesn’t want you to know what they really said.

They are terribly concerned about sex abuse…yeah, right.

It does not mean that SGC does not take allegations against it seriously, or that we are unconcerned about the details of these allegations.

They are sincere Christian who are really learning lots and lots about sex abuse..

Like all sincere Christians and churches, we have learned much about the tragedy of sexual abuse

But, they will not do an independent, third party investigation.

Their reasons are soooo reasonable, being sincere Christians and all.

Scandalous and unproven accusations are just so inappropriate

Rather, we do not think one is appropriate given the present circumstances, in which scandalous allegations have been made publicly against a limited number of parties, without providing credible evidence or based upon any substantive findings by criminal or civil authorities.

The civil authorities investigated this.

(ROFL or throwing up-I’m not sure which) They do not mention that the fact the lawsuits were not heard i because of the statute of limitations. Of course, they overlooked the Nathan Morales trial in which Mahaney brother in law admitted he never reported abuse to the police. How these guys play these games and sleep at night is beyond me.

In addition, and contrary to the impressions of some, the allegations against SGC have not gone uninvestigated; they have been investigated by civil authorities, our own years-long efforts, and the churches involved. Moreover, the ongoing allegations of covering up abuse have never been—before or since the civil lawsuit filed against us—supported by any judicial or investigative findings by law enforcement or any other party.

They are being honest and are not doing this to avoid scrutiny.

I am barely able to contain myself.

We are not denying that there is an appropriate interaction with, and submission to, external authorities for churches. For example, SGC has submitted to external audits that have demonstrated our financial integrity for 30+ years.

Reasons why they shouldn’t do an independent investigation.

It would be unjust.

Banging my head on the kitchen table and upsetting the pugs.

the demand that we subject our entire denomination to an investigation is neither just nor practically possible, nor would it meet biblical, or even civil, standards of justice.

They are still playing games- insisting that the civil authorities have been involved.They do not mention that it was dismissed due to the statute of limitations. In my opinion, they are not telling the truth.

I will not use foul language but it getting increasingly difficult.

The primary events in question relate to the allegations made in the civil lawsuit filed in 2012.

…These circumstances have been investigated by law enforcement authorities, by our own years-long efforts, and by the churches themselves.

These investigations have yielded no credible evidence of any instance of abuse or conspiracy to cover up abuse or to protect a criminal by any SGC pastor or staff member.

Moreover, there is not a single instance of a Sovereign Grace pastor or staff member ever being charged with—much less convicted of—sexual abuse or covering up abuse in our 35+ year history.

In fact, they have learned m much from the Southern Baptist Convention when it comes to dealing with things like this.

I wonder if this was a dig at Papa Bear and the SBC leadership, given their history of avoiding dealing with sex abuse. They sure taught these SGC boys how to handle things, didn’t they?

Like many denominations, our churches are independently constituted. SGC has no more authority to order a denomination-wide investigation of all of its churches than, e.g., the Southern Baptist Convention does.

Guess what? Much of this mess is due to those nasty, renegade online bloggers.

SGC has faced online accusations that are broad, generalized, and unsubstantiated. An investigation of our denomination based on such accusations would remove these issues from biblical—and even secular, civil—standards of justice.

Are such unsubstantiated allegations an appropriate basis for imposing an investigation upon an entire denomination?

Does an entire denomination have to prove its innocence, based upon a presumption of guilt, for every accusation made online, whether it has been substantiated or not?

Who would decide what “independent” means, and how would such independence be established?

And then, they pull the “It”s not biblical”™ card.

How can one biblically justify appointing an investigator to act as both judge and jury over an entire denomination (combining into one person functions that our legal system separates: investigation, presentation of evidence, and judgment)?

Beside, such an investigation needs to be able to measure, get ready folks, their faithfulness!!!!

Pat the head of those really nice pastors.  Good boys…

A just investigation should also measure faithfulness: how should the faithfulness of hundreds of pastors in scores of churches over decades be weighed and factored into a comprehensive view of SGC?

If you’ve never treated yourself to SGC word games with Scripture, you haven’t lived (or maybe you have.) Remember this is the group that brought you:

Despite SGC Leadership’s inability to order an investigation of all of its churches, SGC has a detailed, well-defined polity with clear avenues to pursue biblical justice. This includes objective and impartial means of examining and adjudicating allegations of wrongdoing, within the protections of due process. We believe this honors God and protects our members and churches with both righteousness and compassion.

Please treat yourself to this section to see how churches can interpret things to meet their current needs.

Here is a link to: A RESPONSE TO SOVEREIGN GRACE CHURCHES STATEMENT ON AN INDEPENDENT INVESTIGATION. Be sure to read the entire, well documented post. Here are a few excerpts.

I suggest a point-by-point comparison and cross-check of each statement made by SGC against the facts provided in the above statements. An answer to each of them has already been made. I am discouraged to see the same incorrect information being re-posted.

Regarding the other objections SGC raises to an independent review, these simply are not valid objections. Every institution that desires to pursue truth and accountability must sift through these questions, and numerous Christian experts are available to help properly exegete Biblical standards of justice and accountability. An independent review by a qualified firm requires higher, not lower, standards than the less-defined and basic standards set out in Scripture.

Further, I have provided multiple suggestions to SGC leaders directly that laid out a framework for pursuing an independent review. These suggestions were in light of all these supposed roadblocks and did not violate SGC’s ecclesiology

…For an in-depth theological and academic-level analysis of SGC’s communications and the image-management strategies employed, I highly recommend the doctoral work of Wade Mullen, who has studied and analyzed these dynamics thoroughly. His dissertation can be found here. Search for Sovereign Grace Ministries and Sovereign Grace Churches. https://drive.google.com/file/d/1rXrd8MYay5Vg5s7JXFx7S91hDTlm1CVX/view

I suggest the Southern Baptist Convention consider a resolution that would forbid any ongoing association of Sovereign Grace Churches with the Southern Baptist Convention. Frankly, the SBC has enough problems to deal with at this time.
This response was not at all unexpected. CJ Mahaney has fashioned a denomination (or is it a family of churches) created in his image. Nothing will change until Mahaney and his BFFs are excised from their fellowship.
And if you don’t think this was a kick in the face to Al Mohler and the SBC, you need to read this blog a bit more regularly.