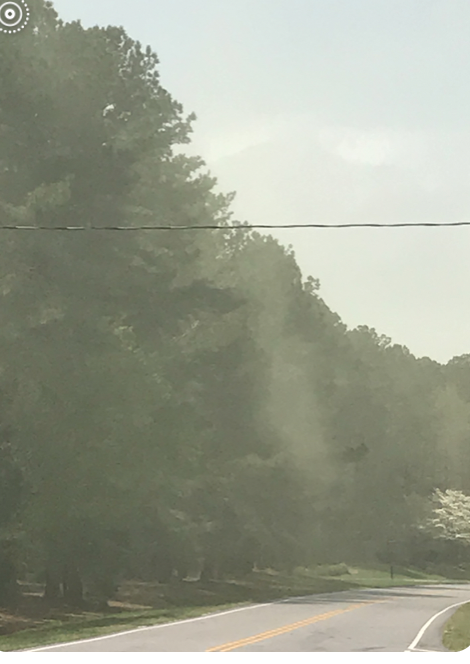 Is this picture of smoke? Early morning fog? Nope. It is the pollen circling in the air on the main road leading to my street. North Carolina allergies are raging!

“Don’t be afraid to make things up. Never fear being exposed as a fraud. Experts make things up all the time. They’re qualified to. ” Stephen Colbert

Let’s start with an answer to the burning question. Ed Stetzer’s VW Beetle cost @ $13,000. How do I know? Julie Roys dug deeper and wrote Contributing Editor for Christianity Today Faces Conflict of Interest Questions After Accepting Car From James MacDonald. She discovered so much more.

James MacDonald: Rolexes and pearls on the church dime. Was Kathy MacDonald in on the scam?

Little did I know that I would kick open a door to a warehouse when I asked about Ed Stetzer’s car and then Pastor Mohan Zachariah’s motorcycle. Roys continued the revelations:

Betsy Corning, wife of former longtime elder board chairman, Dave Corning, told me that in 2008, Harvest honored the couple for 20 years of service with a gift of a Rolex watch and pearls

…Betsy said James MacDonald’s wife, Kathy, had told her that James had bought the gifts with his own money.

The Corning’s left the church and claimed to have sold the items back to the jeweler. They donated the money to ministries outside of their own and HBC.

However, an even more shocking thing occurred when the Cornings asked to see the original purchase receipt from the jeweler. It appears that there were more Rolexes that were purchased. So, who got the other Rolexes? Let this post serve as notice to those who did get the watches that they should return them.

Betsy added that the jeweler allowed the couple to see the receipt for the original purchase. And to the Corning’s surprise, the receipt showed the purchase of four to five additional Rolex watches and named Harvest Bible Chapel as the purchaser.

Does Scott Milholland, Sharon Kostal and HBC Attorney Christopher Nudo have knowledge of these and other purchases? Church members need to demand answers.

The fact that Ed Stetzer and anyone else who got a *gift* from MacDonald could call the church and find out how much it cost and also discover what account it came out of is startling to me. This means that a small (or maybe a large) group of people were in on the game.

I believe that it is time to demand a release of a list of the gifts that MacDonald gave on the church’s dime. It is obvious the information is readily available. How else would Ed Stetzer be able to call the church and find out that the church paid for his Beetle? I hate to use the *f* word but it is appropriate in this situation. *Fraud.* There, I’ve said it. Was there monetary fraud involved in this situation? Or, even worse,…did the church leaders allow these gifts to purchased on the church dime? If so, that should be written somewhere in the bylaws. Folks, its time for a little uprising to demand answers.

I also contacted Harvest Attorney Christopher Nudo. Nudo confirmed that Walk in the Word had purchased the car for Stetzer last spring and that in March, Stetzer had reimbursed the ministry for the full amount of the car, just under $13,000. Nudo said the money for the car had come out of a Walk in the Word reserve account and added that he was 95% sure that former Harvest CFO Scott Milholland had cut the check. Nudo said two other people at Harvest almost certainly would have known about the purchase of the car with Walk in the Word funds—James MacDonald and his assistant, Sharon Kostal, who no longer works for the church.

Are there other larger *gifts* by MacDonald that may need to be explored?

For sure. Here are 4 gifts that have been reported to me by a number of members and former members of HBC. Normally, I would say that it is just so much smoke. This past week has changed my mind. I have the names of all 4 alleged recipients and will attempt to contact them in the next week. If readers have any other suggestions or thoughts, let me know

Also, given the fact that MacDonald family was very involved with HBC/HBF, I would suggest that there be a full accounting of any sort of money or gifts flowing in that direction. Hopefully, everyone will check out as pure as the driven snow.

Christianity Today never returned my call asking about their gift acceptance rules for those affiliated with CT and I am deeply upset.

I plan to write Mark Galli and some members of the Board of Directors. I’ve subscribed to Christianity Today for decades. I used to be excited when I received the magazine because the content ran the gamut from news items to discussions on theology to churches and Christian organizations. I’ve held a deep respect for the magazine, knowing that the idea was conceived by Billy Graham and some of his close associates. I clung to the fact that it didn’t promote a single strain within the broader evangelical community. In other words, I respected the magazine and respected the editors and often defended it to friends.

A couple of years ago, I was told that CT was being pressured by the Neo Calvinist (fondly called Calvinistas) community to become more proactive in presenting those doctrinal views. If they did not comply, this group would form their own magazine and encourage people to follow their tabloid instead. Some of my friends pointed to an increase in articles, etc. focused in that direction. I soundly rejected that rumor as gossip. I claimed that the Calvinistas were in the news and were garnering attention so they deserved to be written about more frequently. But now I wonder if I was wrong.

Obviously, CT does not care about their loyal subscribers or a short phone call back to me would have been made. No, I’m not cancelling my subscription. I still learn much from CT. But, I will never again feel the same way about this publication. They’ve gone the route of sucking up to the establishment and the little guy subscriber is not on their radar.

The other reason I’m upset by CT: Mark Galli and his inappropriate defense of the Stetzer’s acceptance of a car. Ethics in the Christian journalistic community seems a bit lacking.The so called *liberal press* has far better ethics.

Mark Galli was called a *prick* by James MacDonald on the audio posted on this website. Galli, as well as his BFF, Ed Stetzer, were had by MacDonald. Sadly Galli refuses to see how his own ethics have gotten all in a muddle.

Back to Julie Roys article.

Galli claimed there’s just *no story there* in regards to Stetzer acceptance of the car.

Galli wanted to have a private, off the record meeting with Roys and Stetzer.

Roys reported that it would have to be on the record. So the meeting didn’t take place. Now, what would be said in that meeting that could not be said in an open meeting?

Galli claimed that Stetzer doesn’t get money from CT so the car was fine. But, isn’t that a bit of double talk?

Galli seemed to overlook the fact that Ed Stetzer helped grease the wheels for MacDonald’s ridiculous OP Ed on why he should sue.

I was shocked when I read that OP Ed. How could this magazine cater to such nonsense unless… the rumors are true?

Stetzer’s close relationship with MacDonald played a role in CT’s recent coverage of the Harvest debacle. Galli told me about a month ago that Stetzer had arranged the October 31st conversation between MacDonald and CT deputy managing editor Jeremy Weber. That conversation resulted in CT publishing MacDonald’s article defending his lawsuit against me and four other defendants, entitled, “Why Suing is Sometimes the Biblical Choice.”

Galli only admitted Stetzer’s role in brining that piece to CT after Roys reminded him that she knew about the audio.

Galli admitted Stetzer’s role after I told him about a recording I had heard of MacDonald and Weber’s conversation.

Galli inappropriately contacted Roys the day after the audio came out, offering to serve as some sort of reconciler.

It sounds so Christian of him,,. doesn’t it? At that point Roys (and TED and wives) were still being sued by HBC/MacDonald. Galli reached out to the defendants on behalf of the plaintiff. Good night! What was he thinking? No lawyer in his right mind would ever let Roys and the others participate in something like that unless it came through their attorneys.

Where does the leave me?

Finally, I have a suggestion for the next campus that MacDonald takes over. Make no mistake about it, it will happen one day. Build one of these. This way, the new leaders can keep track of the cars being doled out. I bet you could add a Rolexes and pearls sections. Now, a house? Maybe not.