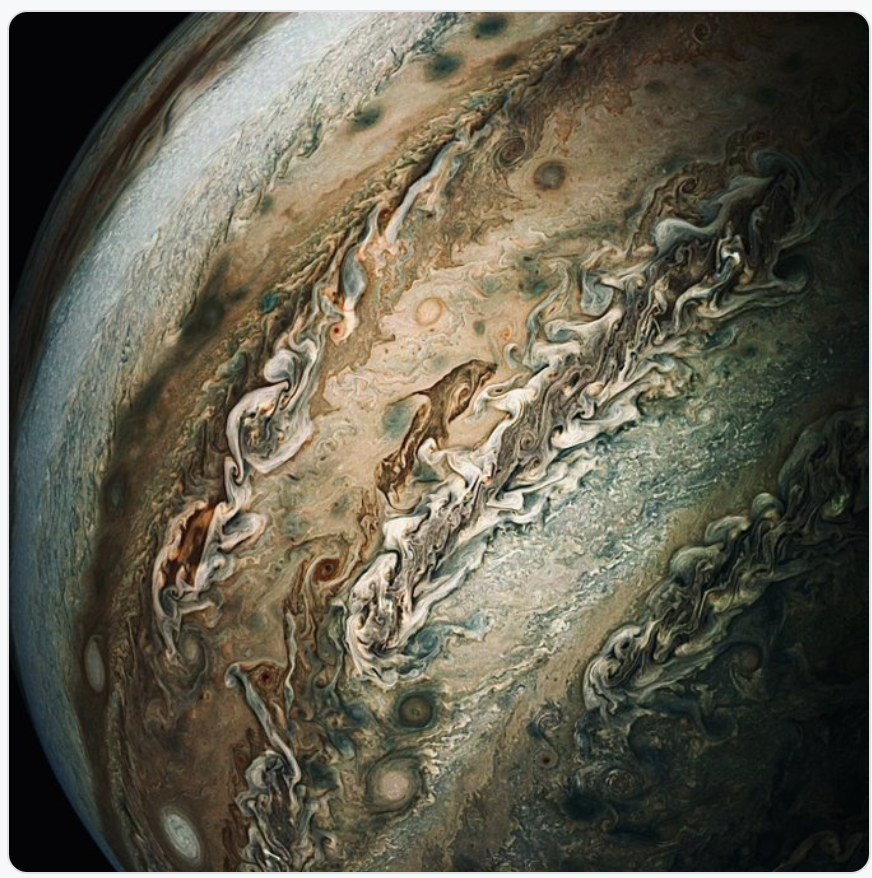 Stephen James Kilpatrick, a Liberty Professor at the time, solicited a minor for sex and got arrested.

At Tuesday’s appeal hearing, Bedford County Assistant Commonwealth’s Attorney Stacey Gardner said Kilpatrick responded to a Craigslist ad posted by an investigator with the Southern Virginia Internet Crimes Against Children Task Force (ICAC) posing as a 13-year-old girl. Gardner said Kilpatrick responded to the ad with a sexually explicit email and continued conversations over the course of seven months through email and text message.

Gardner said the conversations were often sexually explicit and Kilpatrick was told the person he was communicating with was a 13-year-old girl in the eighth grade named “Jenny.” Kilpatrick promised sexual acts to “Jenny,” drove to where he thought she lived and told her he’d thought about her sexually while in his office, according to Gardner.

In July 2018, The Christian Post published 63-Y-O Liberty U. Professor Arrested for Sexual Exploitation of Child Younger Than 15. Liberty University suspended the professor and his family claims that he was subsequently fired.

Liberty University told The Christian Post in an email on Sunday that Stephen Kilpatrick, 63, an associate professor of mathematics, “has been suspended pending the outcome of this matter.

Julie Anne Smith posted  Stephen Kilpatrick: While Teaching at Liberty University and Bible to Small Children, He Also Solicited Sex with a Minor.

She pointed out red flags. His fellow churchgoers were shocked! They haven’t been reading the news.

(JAS) Here is the part that raised additional red flags for me:

“The couple has been active in different churches they’ve attended and Sandra Kilpatrick said     her husband would host small group meetings of church members at their home and help teach small children Bible study.”

(JAS) They’ve been active in different churches?  How many churches? They help teach small children Bible studies? Do these churches and parents of these children know about his recent arrest? And then there’s this:

Kilpatrick’s friends and fellow churchgoers said Tuesday they’d be his support system if he was granted bond. When asked by Pack if his charges surprised them, they all said they were shocked.

This was a good comments from one of her readers. 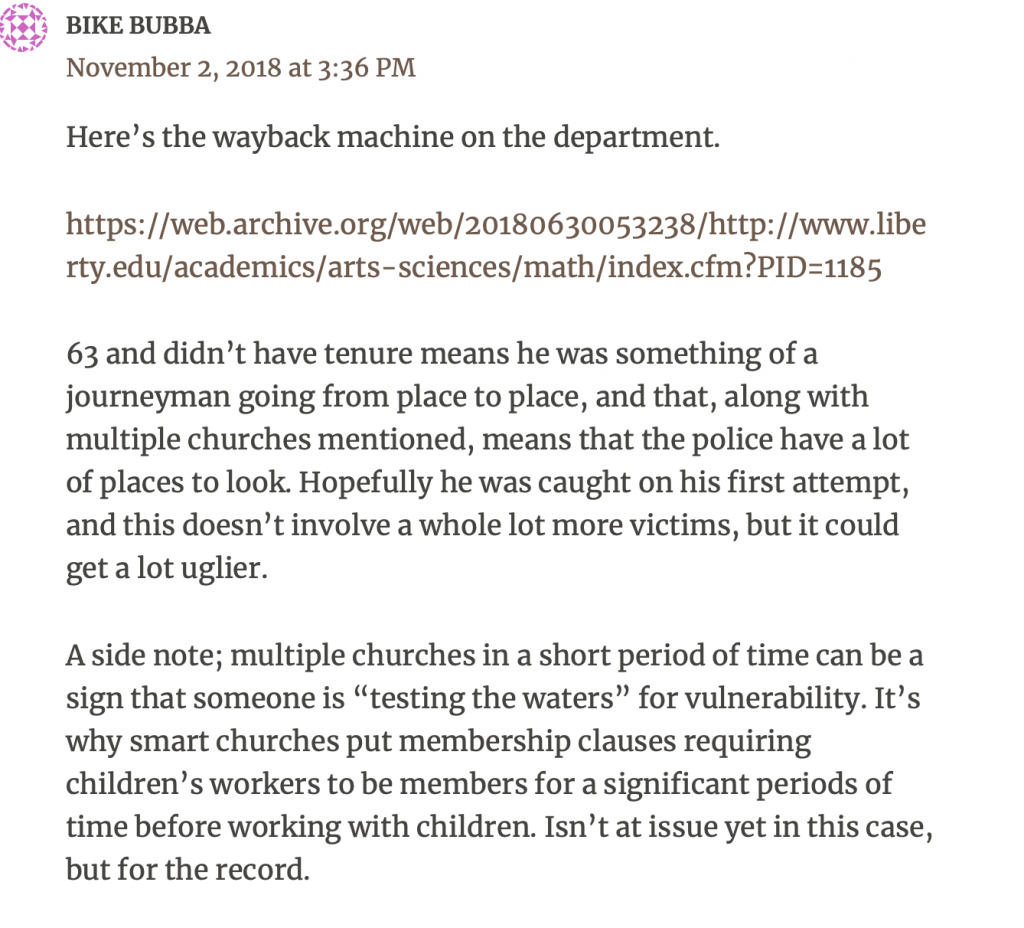 I have no updates on the grand jury, etc. I wonder if there is going to be a plea deal. It will be worth following up to see if church members or friends have written letter defending him if and when that day comes.

He was denied bail and is in jail at this time. ABC 14 News Ex-pastor accused of sexually assaulting 2 minors ‘hundreds of times’

According to the incident report, the charges stem from when Oswald was a pastor living in South Congaree at Dunn’s Chapel from 1996 until 2001.

The report said the sexual assaults involved two women who were minors at the time and the victims told police they were assaulted “hundreds of times.”

According the Greenfield News:

Oswald is jailed on six counts of criminal sexual conduct with a minor, according to Lexington County jail records, one of which involves a child under the age of 11 and three of which involve a child between the ages of 11 and 14.

According to a source who alerted me to the story, the details are gruesome and there may be more victims coming forward. I’ll keep you posted.

Does ECFA (Evangelical Council for Financial Accountability) Really Stand for Anything?

Until 2009, I always that the ECFA Seal of Approval meant something beyond a standard of accounting that is seen in most organization. In 10/2009, all of that changed. I wrote YOU CAN TRUST THE ECFA SEAL OF APPROVAL…(Please forgive the formatting.)

I had discovered that Franklin Graham of Samaritan’s Purse was being paid $1.2 million/year. I began to wonder if ECFA had any standards when it came to pastoral salaries. It doesn’t. Knowing this, it has been easy for me to see why the salaries for mega pastors and para-church megas have skyrocketed. ECFA is fine with it all so long as the board approves it.

I called the ECFA this afternoon to inquire about the press coverage regarding Franklin Graham’s salaries from two of their member organizations.  It seems they have been getting quite a few calls about Samaritan’s Purse and the Billy Graham Evangelical Association.  They followed up with a statement which was e-mailed to Dee.  In case you would like to know the ECFA’s position on the matter, here is their official statement:

Here is the response I received.

Thanks for your call.

The Billy Graham Evangelistic Association and Samaritan’s Purse are both members in good standing with ECFA.

ECFA standards are based on the principles of good governance, accountability, integrity and transparency, and do not place dollar limits on the compensation of its members’ leaders.

Shortly after that, I read that Graham had reduced his salary due to the uproar. But, in 2018 Newsweek published BILLY GRAHAM NET WORTH: EVANGELIST WAS ONE OF THE RICHEST PASTORS IN AMERICA. It is important to understand at this time, Graham’s family was managing the money due to Graham’s advanced age. It is my opinion, and I could be mistaken, that Graham, who lived in the same house all of his life, had not increased his standard of living. I was not surprised to see that Franklin Graham’s salary had increased, once again.

While Graham’s income hasn’t received widespread media scrutiny, there has been recent attention on his son’s $880,000 pay, split between two nonprofit agencies. Franklin Graham pocketed a $622,000 salary as head of Samaritan’s Purse, an international relief agency, along with about $258,000 for acting as CEO of the BGEA, according to a 2015 Washington Post article. The BGEA reported about $120 million in total revenue for 2016.

At this point, ECFA lost me and I no longer had much interest in the organization. For example, Mark Driscoll’s church had ECFA’s seal of approval. In 2014, Rob Smith posted The ECFA has purged their web-site of Mark Driscoll, but still certifies the integrity of Mars Hill Church.

Mark Driscoll has been purged from the ECFA website. There is not a single reference to him. Nothing.

Until recently Driscoll was highly featured in their advertising. An attempt to go to theWayBack Machine to see when the change occurred was blocked. It appears that the ECFA uses robot.txt to block its history to the public.

So some time recently, Mark Driscoll was purged in a similar way to the way that Mars Hill Church would purge any reference about or sermons and writings of departing (and sometimes shunned) pastors such as Lief Moi and Mike Gunn, both co-founders of Mars Hill Church.

It got worse. In 2016 ECFA Named as Co-Conspirator in Lawsuit Against Mark Driscoll, Ex Mars Hill Chief Elder

The couples charge that they trusted Mars Hill to be good stewards of their donations because of the ECFA’s endorsement of the church.

“As a result of ECFA’s ringing endorsement and declaration that MHC met the highest standards of financial ethics, faithfulness, and accountability, the Jacobsens, Kildeas, and thousands of other donors continued to be deceived, making donations to MHC they would never have made if ECFA had disclosed RICO defendants’ wrongdoing, rather than making a ‘a powerful statement’ that MHC ‘acts responsibly and honors its commitment to accountability,'” charges the complaint.

The ECFA it alleges, despite Mars Hill Church’s “habitual pattern of racketeering activity,” kept rubber stamping the church with its trusted seal until the church was run to the ground in 2014.

“ECFA’s accreditation of churches is, at best, a rubber stamp. In view of RICO defendants’ fraudulent conduct detailed herein, it is inconceivable that ECFA would have accredited MHC and held it out to the public as meeting ‘the highest standards of financial ethics, faithfulness, and accountability,'” it adds.

The complaint alleges, however, that that is exactly what the ECFA did.

Depending on how you feel about Franklin Graham’s earnings from these two charities, you may want to do your own due diligence regarding the non-profits to which you contribute. Are they meeting YOUR standards of integrity and accountability?  Sadly, I believe I had learned that there are times when one should question the ECFA Seal of Approval. And that is precisely what Julie Roys did.

Also last week, I confronted the ECFA for continuing to accredit Harvest despite my repeated appeals over several months to ECFA to investigate financial impropriety at the church.

On Friday, the ECFA released a statement announcing that Harvest may no longer represent that it is an ECFA member or display ECFA’s membership seal. The ECFA also said that because of new information, it has “concerns” that the church may be “in serious violation” of four of ECFA’s Seven Standards.

It’s stunning to me that it has taken this long for the ECFA to act.

“On November 28, 2018, ECFA opened a formal investigation of Harvest Bible Chapel to review their compliance of ECFA’s Seven Standards of Responsible Stewardship. During a site visit to the church in December, we thoroughly examined the information made available to us and believed the church was in compliance with our standards.

“Given the emergence of new information, we have concerns the church may be in serious violation of ECFA Standards 2, 3, 4, and 6. During the indefinite suspension, the church may not represent that they are an ECFA member or display ECFA’s membership seal. The investigation has been and will remain ongoing during the suspension as we work to determine whether Harvest Bible Chapel should be terminated, advised of the steps necessary to come into full compliance or whether they are in fact in compliance with our standards and should, therefore, be restored to full membership.”

You can look at these” 7 standards” at this link. There’s lots of wiggle room, in my opinion.

And in the *you can’t make this stuff up department, two days later, Roys  posted President of Evangelical Financial Accountability Group Fined for Unlicensed Use of CPA Title. Apparently the Virginia Board of Accountancy was none too happy with Busby. According to Roys:

According to the complaint submitted to the VBOA, Busby allowed his CPA license from the state of Kansas to lapse in 2000, two years after moving to Virginia. Then from 2000-2015, Busby was not licensed as a CPA, though he repeatedly claimed he was. In December 2016, Busby obtained a CPA license from the Virginia board, which remains active.

According to the VBOA complaint, Busby falsely represented himself as a CPA on multiple books published by Zondervan between 2000-2015.

….Given that the ECFA and Busby’s platform rely on trust and integrity, one would expect Busby to be above reproach. Yet according to the Virginia Board of Accountancy (VBOA), Busby was fined $9,000 in 2016 for the unlicensed use of the CPA (Certified Public Accountant) title on at least 38 publications, his personal website, the ECFA’s website, and the Church Law & Tax website.

…Brian Taylor, a former CPA who now works for a small consulting company in the Dallas/Ft. Worth area, sent me the VBOA complaint, which he said he researched and submitted four years ago. Taylor noted that Busby had worked as a CPA for 31 years before coming to the ECFA, and said his misrepresentation was intentional and inexcusable.

“With Busby, it was a 15-year pattern of intentional fraudulent inducement to sell books and enrich his pocketbook and his reputation,” Taylor said. “This was no accident. . . . He knew he didn’t take any CPE classes for 15 years. You can’t do it for 31 years and then suddenly forget. CPAs are reminded annually.”

Roys’ post is enlightening. Over the past few months, she reported what she considered to be HBC violations directly to ECFA with no response. Sadly, Busby has not responded to her request for an interview.

Where do I stand? 10 years later, it’s still the same old, same old ECFA whose *seal of approval* is still suspect in my book.