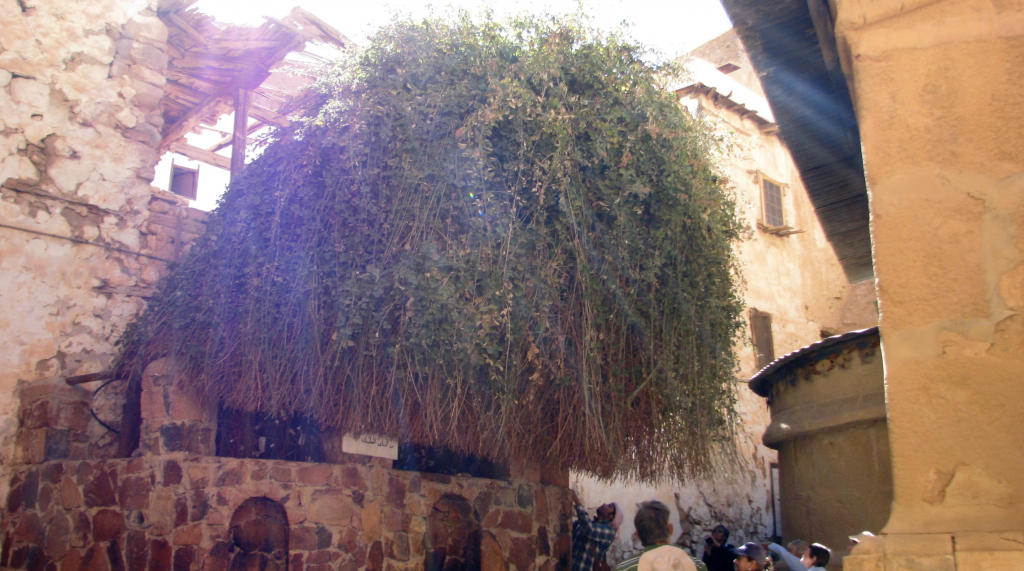 The bush at Saint Catherine’s Monastery in the Sinai Peninsula, which monastic tradition identifies as being the burning bush.

“The highest form of worship is the worship of unselfish Christian service. The greatest form of praise is the sound of consecrated feet seeking out the lost and helpless. ” Billy Graham

Do you remembers the stories we did on John Longacre who went to prison for molesting Kelly Haines when she was a student in a Christian school in which he taught?

Longaker claims that he was hoodwinked by the judicial system into pleading guilty in order to receive a reduced sentence with no prison time. However, he ended up going to jail link.

Haines’ story was picked up by three sources.

It is easy to understand why a convicted molester might deny doing anything wrong. But this story takes an ugly turn when it comes to the leaders in his church, Fellowship Bible Church in Castleton, Vermont. The titles of these articles say it all.

According to the Burlington Free Press:

Since they were told in 2014 of Longaker’s criminal convictions, church leaders have continued to stand by their pastor. They say they believe Longaker pleaded guilty to crimes he did not commit.

“The Lord has appointed him as pastor, and the Lord will remove him. Not anyone else,” said Don Wood, an elder at the church, in a telephone interview. Wood said he has known Longaker for 12 years and has never witnessed or been told of any impropriety.

Wood said the pastoral search committee who eventually chose Longaker saw no need to request a criminal background check or call references. The lack of vetting in Longaker’s case was an exception to what would typically be done for other job candidates, Wood added.

“We didn’t think it was necessary for John,” Wood said. “It would have been necessary if it was somebody that we had no knowledge of.”

According to the Rutland Herald:

In light of media attention, a local church is standing by its decision to hire its current pastor, who has a criminal record, without first conducting a background check.

…Longaker said those who do work with children through the church have had background checks done on them.

Longaker said with few exceptions he’s been careful not to counsel teenagers or woman alone.

“With the exception of one, I talked to one teenager, she’s 13, but her grandmother was out in the hallway. That has always been my policy. I don’t counsel women alone, unless they happen to pop in with an emergency, then I’ll counsel women alone. I’m not going through that again, so I make it a point not to do it,” he said.

He and Wood said they plan to install cameras in the pastor’s office and in other places around the church.

Longaker said he’s offered to resign several times now to spare the church embarrassment, since he holds no hope for his own reputation.

The Burlington Free Press quoted a Pennsylvania prosecutor regarding this situation.

Pennsylvania prosecutor Houck, who spent a decade prosecuting sex crimes against children in Bucks County, says that people who “groom” victims are likely to offend again.

“This type of behavior is in you,” Houck said. He added, regarding Longaker, “There’s no middle ground with someone like him.”

According to USA Today:

At the advice of her current pastor, Haines told her story this past fall on a blog devoted to publicizing church abuse, the Wartburg Watch. Several other bloggers also picked up the story.

Longaker said in January that he regrets keeping his convictions a secret because of the recent publicity.

Let me spell this out for you.

The leaders of this church in a little town in Vermont claim they know more about Longaker than the court which convicted him. They have chosen to disregard his conviction and prison sentence because they *know* Longaker. I wonder if they know this sounds arrogant?

I have said this before and will say it again. Every time a serial killer is discovered, the neighbors cannot believe that a guy they *knew* could do such wretched things. This killer would help shovel snow, come to the block parties, give Christmas cookies, etc. The naivety of people is exactly what predators are banking on. Predators are successful precisely because they appear trustworthy and nice. They can preach a great sermon. They are loved by parents and all the older people in the church. They are often charismatic. They can be married and have children.

We imagine pedophiles as creepy men with shifty eyes, stubble and a trench coat. We think they lurk around schools and playgrounds, waiting to snatch children. We think of these men as despicable lowlifes whom we can spot when we meet them, which is why news of sex crimes against children are invariably met with disbelief. “Stunned” parents and community members say the same thing: “He never seemed like that type of person.” In my three decades working with many men who sexually violate children and teens, I’ve never met one person who fit “that type.”

Pedophiles come in all shapes and sizes and from all walks of life. Some are rich and others poor; some are highly educated while others aren’t; some are very socially skilled and delightful conversationalists and some more reticent. So often we hear that people would never in a million years expect so-and-so to harm children, be a pedophile or engage in child pornography because they’re charming, clean cut, fun to be around, successful in their careers, have a nice family life, and so forth. We wonder how such a winner could be a pedophile.

If the leaders of this church truly understood the Gospel, then they should be the first to say that all have sinned and fallen short of the glory of God. That means they are fallible in their decision making and should be wary when anyone who has been convicted of a crime against a child or a teen presents themselves as a *victim of the system.* They are highly likely being had by a pro.

Why I believe that Fellowship Bible Church is spouting nonsense when it comes to God.

One of their leaders claims that God put Longaker into his position. Excuse me…exactly how did that happen? Did God appear in a burning bush at the front of the church one Sunday morning and say “Make John the pastor here (and get a new sound system while you’re at it)?” Having been around a variety of churches since I became a Christian when I was 17, I have observed that people become pastors after being voted on by either the church leaders or the church membership.

I think what the leader (Wood) is really saying is, “We put him there and he will stay there until we are good and ready to replace him.” Let me meddle a bit more. Could it be that there is a bit of pride involved here? Could it be that the leaders are a bit embarrassed by their poor decisions in this area and have decided to cover it over with some Christian lingo. They should be careful when they claim that God did something when it is merely men who did it. Let’s not blame God for our poor or thoughtless decisions

Let me reassure those leaders. We all make errors in judgement, even leaders. Sometimes, for the sake of our witness to the world, we should humble ourselves and admit it instead of playing Christianese word games. In my opinion, you all voted to put him there, not God, and you made a mistake.

Why I think Fellowship Bible Church is an unsafe place for those who have been abused.

Longaker was tried and convicted. How much more does a victim of abuse have to do to prove that they were harmed? This is a church which says they don’t give a hoot about the evidence, the trial and the conviction by a court. Somehow, a victim must do more to convince this church that their pastor is an abuser. How sad is that? I do not believe anyone who has been a victim of abuse should hope to have a fair hearing and receive comfort from this church body.

Even worse, they have not reached out to care for Kelly Haines. This, in the end, is the sad legacy of this church in 2019.

Here is a discussion by the writers of the Burlington Free Press about the the Kelly Haines’ story. The only disagreement I have with them is that they keep referring to Longaker as an alleged  criminal. We can state he is a criminal. He was tried convicted, sentenced and served time in prison.