“One man may be so placed that his anger sheds the blood of thousands, and another so placed that however angry he gets he will only be laughed at. But the little mark on the soul may be much the same in both. Each has done something to himself which, unless he repents, will make it harder for him to keep out of the rage next time he is tempted, and will make the rage worse when he does fall into it. Each of them, if he seriously turns to God, can have that twist in the central man straightened out again: each is, in the long run, doomed if he will not. The bigness or smallness of the thing, seen from the outside, is not what really matters.” CS Lewis 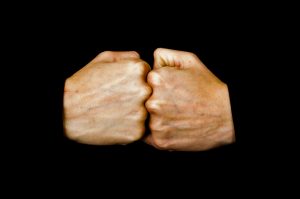 Over the last two years I have lost two friends to politics. One was infuriated when they found out for whom I voted in 2016. The other was in agreement with whom I voted for but was angry that I was still friends with those who voted differently. The fury with which they responded to me was a shock to my system.They both claim to be committed Christians yet both acted in surprisingly un-Christian ways.Why such anger?

Stunningly, both individuals had confided in me about having lost friendships in churches when they disagreed with the direction of that church. Both were shunned, de-friended, and treated poorly. Yet both responded to me in similar ways. Why?

Years ago, I was very involved in politics, having been both a Democrat and a Republican. However it was at a Republican meeting that I heard a conversation that caused me to walk away from politics. A group of men and women were bad mouthing some attendees who were not Christians and saw things a bit differently. I butted in and said, “This is not another Bible study and non-Christians should be welcome in this group.”

It was this encounter that caused me to realize that politics never change the souls of people. It just tends to split people into groups who are always angry with one another. I decided that I wanted to concentrate my efforts on changing the church. Little did I know the path I would take that brings me to this day.

Loneliness, which leads to anger, is tearing America apart.

I was thinking about this when I heard about NYT op ed written by Arthur C Brooks on 11/23/18. How Loneliness Is Tearing America Apart. However, it was the subtitle that caught my eye.“When people have a hole in their life, they often fill it with angry politics.”

Before I continue, I want to stress something. This is NOT going to be a discussion on politics. I have dear friends who cover the spectrum of political beliefs. I have friends in Europe who are socialists and are Christians. I have friends who are fundamental Baptists who won’t touch a drop of alcohol, consider themselves Republican and are free market proponents. My two years on the Navajo Reservation gave me a different perspective on how we have treated Native Americans who have beautiful hearts. My father was a dedicated Democrat until the final years of his life. I grew up hearing him expound the virtues of FDR and JFK. I am grateful that God brought me family and friends from all walks of life. I grew to appreciate their differing points of view. We were friends in spite of differences. We loved one another because our friendship was more important than political differences.

Brooks quoted a large scale study by Cigna which is a health care provider. Here are some stats from the study.

When people are lonely, they turn to angry politics: It’s “Them” vs “Us.”

Senator Ben Sasse’s new book is highlighted in Brooks’ op ed. Them: Why We Hate Each Other and How to Heal. Brooks says Sasse’s book makes a bold claim. Loneliness is killing us and this is evidenced by the skyrocketing suicide rate and death from overdose rates. He takes it further. The second paragraph in the following quote nails it. (I did not choose this book because Sasse is a Republican. This op ed has been discussed throughout social media and caught my attention.)

Mr. Sasse’s assertion that loneliness is killing us takes on even darker significance in the wake of the mail-bomb campaign against critics of President Trump and the massacre at the Tree of Life synagogue in Pittsburgh, both of which were perpetrated by isolated — and apparently very lonely — men. Mr. Sasse’s book was published before these events, but he presciently described what he believes lonely people increasingly do to fill the hole of belonging in their lives: They turn to angry politics.

In the “siloed,” or isolated, worlds of cable television, ideological punditry, campus politics and social media, people find a sense of community in the polarized tribes forming on the left and the right in America. Essentially, people locate their sense of “us” through the contempt peddled about “them” on the other side of the political spectrum.

According to Sasse, few people experience that “hometown gym on Friday night” feeling.

I grew up in Salem, Massachusetts in which I experienced that feeling. Many people in town went to softball games between City Hall and the Fire Department. Walking downtown, I always had people who knew my name and asked about my family. These were people who knew me and cared about me even though we believed very different things when it came to church, politics, etc. Love grows within the safe context of familiarity.

Too many Americans don’t have a place they think of as home — a “thick” community in which people know and look out for one another and invest in relationships that are not transient. To adopt a phrase coined in Sports Illustrated, one might say we increasingly lack that “hometown gym on a Friday night feeling.”

He describes the high school sports events on Friday nights that drew the townspeople together in a common love for their neighbors and community that made most differences — especially political differences — seem trivial.

We can fight loneliness in ourselves and hatred towards one another by intentionally investing in the places where we live.

I loved this next quote because I see that happening in my own life at this time. I have joined a church in which I am beginning to feel comfortable in reaching out to others. I just got a Christmas card from a person in the church. In my own neighborhood, I’m getting to know neighbors due to a common cause which has united us.We have had some laughs with one another while we work together to fix a problem. Until the problem, I had never seen these folks and I’m so glad to get to know them.

It isn’t about how I feel about any place I have lived, nor about my fear of isolation in a new city. It is about the neighbor I choose to be in the community I wind up calling my home.

Be cautious of political opportunists on both side of the fence who seek to divide us by angry, hate driven politics.

We all need to be the kind of neighbor who cares about those around us. We need to address the loneliness inherent in our culture which leads us to divide from each other. We should fight against hate and seek understanding even if we have different points of view. We should have friends who see things differently than us so we do not isolate ourselves into a bubble of loneliness and superiority.

And there lies the challenge to each of us in a country suffering from loneliness and ripped apart by political opportunists seeking to capitalize on that isolation. Each of us can be happier, and America will start to heal, when we become the kind neighbors and generous friends we wish we had.

The church has its own crowd of political opportunists who delight in carving out an *us versus them* free for all.

Churches can become an antagonistic place of  *us versus them.”Anger which results in division is often exhibited on issues such as:

I could go on and on. Maybe that is why so many Christians love the political gamesmanship. It makes them feel superior to the *others.* Yet they are missing the real reason why Jesus came and are not dealing with their own loneliness and sin. I placed this quote on the effects of anger at the top of the page but I want to repeat it here. CS Lewis gets it.

“One man may be so placed that his anger sheds the blood of thousands, and another so placed that however angry he gets he will only be laughed at. But the little mark on the soul may be much the same in both. Each has done something to himself which, unless he repents, will make it harder for him to keep out of the rage next time he is tempted, and will make the rage worse when he does fall into it. Each of them, if he seriously turns to God, can have that twist in the central man straightened out again: each is, in the long run, doomed if he will not. The bigness or smallness of the thing, seen from the outside, is not what really matters.” CS Lewis

Deep down inside, are you lonely and need to feel like you belong? If you are not making peace with others, why not? If you are separating yourself from others because you have divided your world into an *us versus them* paradigm, you are falling for the shtick of the political opportunists who will use your anger and not care one bit about you. If you are irate at those who don’t see things your way, you need to reexamine the Scripture. We have all sinned and fall short of the glory of God every single day. But Jesus came to bring peace. Are you doing the same?

19 For God was pleased to have all his fullness dwell in him, 20 and through him to reconcile to himself all things, whether things on earth or things in heaven, by making peace through his blood, shed on the cross. (Col1:19-20) NIV

Do you know this *us versus them* story? If they could do it, why can’t we?