“The death of a beloved is an amputation.”  ― C.S. Lewis, A Grief Observed link 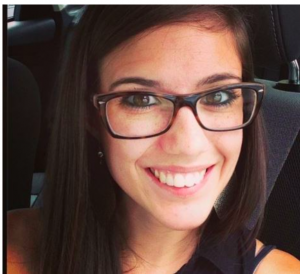 For those of you who do not know the story, a beautiful young woman was brutally murdered by her husband, Matthew Phelps. They had been married for less than a year. You can read a story I wrote here. Standing With the Family and Friends of Lauren Hugelmaier

As the year progressed, I learned many things. Today, I listened to the sentencing in its entirety. It is important to understand that Phelps’ defense was originally going to be that he overdosed on Coricidin and that is what contributed to his fatal stabbing of Lauren.

Trigger Warning: I will describe the autopsy findings in the next paragraph only.

By 4/2018, it was learned that Lauren was stabbed and slashed @123 times. Today, we learned that most of those stabbings centered around the upper part of her body and her head. Phelps underwent a battery of mental health examinations after his arrest. It was also determined, through his Instagram account, that he had a fascination with the movie, American Psycho.

a film about an investment banker who kills people indiscriminately, and he also posed as the main character in some of the posted photos.

Today, a bearded and long haired Matthew Phelps appeared before a judge in Raleigh. The following is what I learned from listening to the proceedings.

Why did Phelps and his attorney(s) decide to go with a plea bargain when last year they appeared to be going with “the medicine made me do it” defense?

Important information came out during the hearing. Apparently the blood level of Coricidin in his blood was so low that it would not have caused dizziness or hallucinations. That was the straw that broke the defense’s back.

If you refer to my assessment in last year’s post, I predicted that the defense attorney was going to make this trial into a three ring circus. I had visions of the Bayer Company being dragged into court, ending with a verdict of *not guilty* as the defense began a huge civil action against the company. All hopes for this possibility were dashed with the toxicology report.

Now, the very real threat of the death penalty hit home for Phelps.

The incredibly kind, brave and extraordinary actions of Lauren’s family.

The victim’s impact statements by Lauren’s family were hard to hear. I went through a box of Kleenex while listening. I spent time praying for them as they bravely spoke of their love for this beautiful women. Mad respect and admiration…

During this time, it was disclosed how much the family worried about Phelps as things began to deteriorate. They loved him even as the difficulties in the marriage became evident. None of them ever suspected the serious deterioration of Phelps’ mental state.

The defense attorney helped everyone to understand the depth of kindness in this family. He thanked the family for their willingness to let Phelps live. It appears that the DA sought the family’s approval for taking the death penalty off the table. How hard this must have been for them! Their decision was a powerful testimony to their deeply held faith.

If you read my initial post, you will find that I felt that he referred to Lauren in a dismissive way.

Although we believe that everyone is entitled to the best defense possible, we also know that the tactics which could be employed by the defense could be hurtful to Lauren’s family and friends. For example, have you noticed the distancing employed with calling Lauren *a young lady?” She has a name and she was more than just a young lady in Phelps’ life.

“Matthew’s family and all of us at my firm really send our deep condolences to the family of the young lady.”

Apparently, others noticed his cavalier attitude when referring to Lauren. Today, he turned to the family and apologized. It was surprising, yet necessary.

Phelps also made a statement.

Phelps appeared subdued and even a bit confused. His attorney mentioned that his client was put on medication to help him deal with depression and anxiety. I’ll keep this short. He did not beg for forgiveness. He mentioned something about being a monster but did not seem emotional. Drugged, perhaps or maybe just emotionally empty?

Fifty members of Hope Lutheran Church accompanied the family to the sentencing hearing.

The judge commented that he had never seen so many supporters of a family in a sentencing hearing. Many of them were wearing T-shirts with the words “Lauren’s Light.” It was thoroughly moving. Those folks were a witness to me as well an many others. So many times we have to report when churches do not support victims.

In the end, I believe justice was achieved, as far as it can be in this life. It does not bring back Lauren but it honors her precious life.

Lauren’s life matters. She is not forgotten. At least once a month, my husband and I visit her spot in the columbarium. We touch her name and pray for her family. However, we do not have to pray for Lauren. Lauren is flashing her beautiful smile as Jesus smiles right back at her.

In my last post, I mentioned Lauren’s favorite song, Legacy.

Listen to this song “Legacy”, which was played during Lauren’s funeral because it was her favorite song.

To Lauren’s family: she did leave a legacy, and many people now know about this outstanding young woman who loved God, kids, and her family and always had a smile that lit up any room she entered. She will be terribly missed!