“No man knows how bad he is till he has tried very hard to be good.” CS Lewis 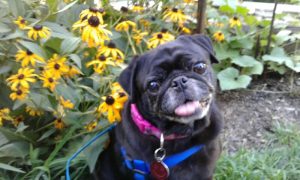 Buttercup was the victim of a backyard breeder. She (and 30 other pugs) were so poorly treated that the owner’s son called the authorities. She is shy and anxious but seems to love our home. She has learned to go through the doggy door. Sending kudos out to Mid Atlantic Pug Rescue for making this possible.

I was told that The Masters University was going to be put on probation several weeks ago by one savvy person who shall remain anonymous. I planned to post this next Monday but the cat is out of the bag.

It is important to understand that John MacArthur is the current President of the university as well as the seminary. Today, Warren Throckmorton wrote The Master’s University Placed on Probation by Regional Accrediting Organization

Here is a link from Dr Throckmorton’s website to the REPORT OF THE WSCUC TEAM For Reaffirmation of Accreditation To The Master’s University and Seminary March 21-23, 2018 I believe it was this report that started the rumor mill.

While the panel noted TMS’s efforts to examine the presence of women’s experiences and perspectives within the curriculum, they encouraged the seminary to “use its findings in ways that can demonstrate to the next review team that the assessment process in this area has resulted in positive change, perhaps as broader dispersion of women’s perspectives through the curriculum.”

Multiple reports were provided to the AVT that several persons were believed to have been dismissed from faculty roles for reasons of “lack of fit” with theological values that were not explicitly outside stated theological standards. While these could not be thoroughly investigated as part of this review, the volume of comments and specific details provided leave a concerning question of whether academic freedom exists.

In prior WSCUC reports, TMUS’s lack of diversity in hiring and curriculum was noted. ​In 2018, records and interviews demonstrated the presence of female faculty in university faculty ranks and in junior ranks of administration. The seminary reported the presence of female scholarship being included in supplemental reading lists in the syllabi of required courses which is a beginning response but is not sufficiently robust to be considered complete. Commitments to diversity in academic content and hiring practices do not need to be seen as contrary to institutional values regarding the role of women in ministerial leadership but still require additional, timely, and specific attention.

(Autonomy is rather lacking:)

Notably, significant proportions of TMUS faculty and staff have dual relationships with institutional leaders, as many worship at GCC where President MacArthur has been the senior pastor since 1969, in addition to working at the university or seminary where he is President. Further, a number of cabinet-level leaders of TMUS are also on staff at GCC. Consequently, employees’ higher education supervisors can also be their pastoral staff member. Some interviewees noted that lives were so intertwined that, should they be dismissed or leave TMU over a substantial difference of opinion, they lost their entire support community — as a TMUS alumnus and employee as well as a congregant in Grace. They reported this was the reason for past silence on matters of concern.

Further, in conversation with members of the board, the AVT developed concern that the board’s statements of extraordinary confidence in President MacArthur have resulted in less oversight of the administration than is expected, especially in a period of significant flux as has recently occurred. Board members stated unequivocally that they could say “no” to the president, but could not identify any occasions on which they actually had done so and self-identified as President MacArthur’s closest friends in the world

(Students who are children of donors seem to get better institutional aid:)

The AVT noted with concern the auditor findings that “multiple students who are family members of donors or related parties at TMUS received institutional aid … [which] appeared to be above what is typically offered to all students and is an inconsistency in awarding … according to the currently policy.” This is troubling, both for students without such connections, but also as a matter of integrity with donor, tax-exempt donations, and financial aid practices. The lack of timely responsiveness to auditor reports is concerning .

(Bullying and a climate of fear:)

This, coupled with the finding of a pervasive ​culture and climate of fear, intimidation, bullying, and uncertainty which appears to be created by the newly appointed management, provides significant areas of concern regarding sound and ethical business practices; these concerns were exacerbated for the AVT by significant community member reports of the fear of speaking up, despite protections of a whistleblower policy .

(Grades overridden and PhDs awarded outside of usual practices:)

As noted previously, grading and degree integrity emerged as an area of concern relative to incidents of a grade change in the seminary, outside usual and customary practices. The report was that a faculty member gave a student a failing grade. When the student appealed the grade, the TMS leadership had the assignment regraded by someone other than the professor of record; this second individual issued a passing grade that was recorded in lieu of the faculty member’s assigned grade. Multiple reports were received — through the confidential email file and in conversations with TMS staff and leadership — of doctorates being awarded outside defined program and degree requirements. Faculty processes and voices appear to have been silenced and/or overridden by competing concerns from other sectors of leadership. These are alarming reports as they speak to the meaning, quality, and integrity of a degree from TMS, the integrity of the institution and its leaders, and the fidelity to approved standards

(Financial concerns of the institution:)

Warren Throckmorton had this to say.

Of particular concern is a finding of conflict of interest involving president’s son-in-law Kory Welch who functions as an administrator. According to the action letter, this individual oversees contracts which have gone to friends and relatives.

There is also mixing of staff and payments between MacArthur’s ministry Grace to You and TMU. For instance, on the 2015 990 form for Grace to You, John MacArthur’s son-in-law Kory Welch’s business were given nearly $790,000 for contract work.

Is there anyone out there who is *shocked* by these observations of the agency?

The team found a pervasive culture and climate of fear, intimidation, bullying, and uncertainty among significant numbers of faculty and staff.

The team recommends the board immediately establish a special task force to address these substantial​ ​concerns, including related personnel actions (CFR 1.3, 1.6, 1.7, and 3.6).

The team recommends the board immediately establish a special task force to address these substantial​ ​concerns, including related personnel actions (CFR 1.3, 1.6, 1.7, and 3.6).
The team found a pattern of seemingly arbitrary personnel actions (hirings, terminations, promotions, demotions, and lack of regular evaluations) with a lack of due process and in
WSCUC Team Report for TMUS: March/2018
42
violation of existing TMUS Employee and Faculty Handbooks. This included reports that some individuals had been notified they would be dismissed after the Onsite Review Team visit.
The team recommends that the board hold the President accountable for ensuring that his leadership team and those in their span of care follow institutional policy in personnel decisions and require quarterly reporting on staff and faculty transitions and evaluations, with note of the importance of honoring the Whistleblower Act and related policy in the Employee Handbook (1.6, 1.7, 3.2, 3.6, 3.7, and 3.9). Specifically, the team recommends the board authorize an independent review of all faculty and staff departures over the last 2-3 years. There were multiple independent reports of concerning irregularities.

The institution fails to meet the WSCUC requirement for governing board independence. Virtually all board members have long-term relationships with the President and come from within his specific circle of influence.
The team recommends that the board immediately review the WSCUC Independent Governing Board Policy and conform accordingly (CFRs 3.7 and 3.9, and Independent Governing Board Policy).
The team noted several instances of academic irregularity outside established procedures and best practices. This includes the awarding of some doctoral degrees with significant leadership pressure and outside usual academic standards and reviews, significant faculty hiring from alumni ranks as well as faculty hiring practices which lack substantial review, awarding faculty rank without traditional faculty and/or chair input, and individuals directly or indirectly overseeing academic programs in which they are enrolled.

The team recommends that institutional leadership assiduously follow the policies of the Faculty Handbook and higher education traditional practices, with the Provost being
WSCUC Team Report for TMUS: March/2018 43 directly accountable to the board for reporting on faculty hirings, releases, and awarding of degrees (CFRs 1.3, 2.1, 2.2, 2.4, 3.10, and 4.6).

The team notes with concern a pattern of operational irregularities, including the 2017 auditor’s specific finding on appearance of conflicts of interest with the President’s son-in-law supervising a contract from which he benefits, as well as institutional aid being awarded to related parties exceeding typical award amounts. The lack of response to this finding six months after it was identified as an auditor “significant finding” adds to the concerns of leadership willingness to promptly align with accreditation and financial audit standards.

The team recommends that the institution seek and receive legal and auditor guidance and implement practices to insure the resolution of all reported conflicts of interest (CFRs 3.6 and 3.7)​.

The following letter was sent to John MacArthur outlining the above concerns.

Just like Paul Pressler’s extracurricular activities are considered the worst kept secret in Texas, John MacArthur has long been known to live well and to ensure that his friends and family also live well. This was probably NOT a big surprise to anyone.

Keep those tithes rolling in, folks. MacArthur and friends need it.